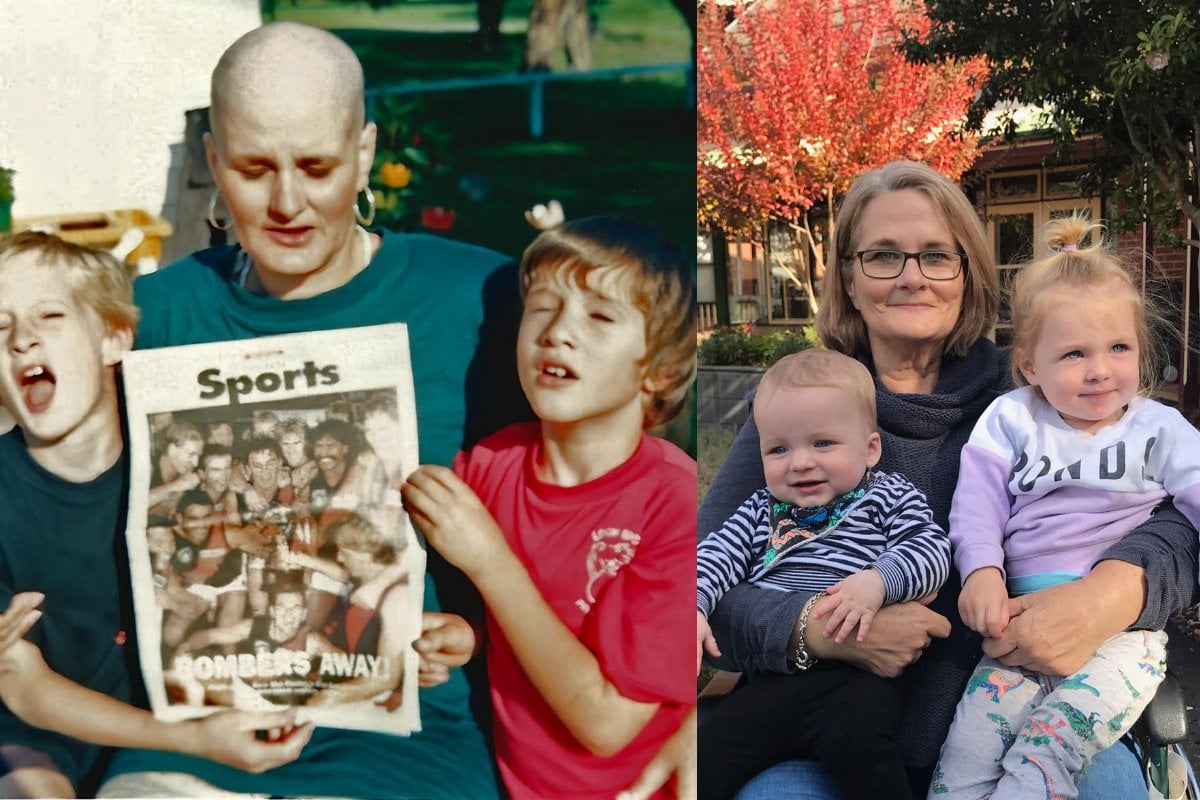 This post deals with sensitive topics and may be triggering for some readers.

﻿﻿Sadly, just days after sharing her story with us, Marlene passed away on Thursday, October 7, 2021. Supported by her sons Nik and Mat, it was her wish that we still publish her story exactly as it was written and share her important words.

Marlene Parsons has had breast cancer for 28 years and this time, the doctors are right, she is finally dying.

But she doesn’t want you to feel sorry for her. She considers herself lucky. She has had a good life, a longer one than she was initially promised, and she is grateful for all the things she never thought she would see; her sons graduating, growing up, marrying and, most of all, becoming a grandmother.

Each milestone filled her heart and gave her the motivation to keep going to get to the next one.

Watch Check Your Breasts. Here's what to do, and what you're looking for. Post continues after video.

But there’s only so much one person’s body can take and the 63-year-old grandmother from Gippsland Lakes in Victoria has reached the end of her life.

She’s at peace with death, she is “surrounded by love” and has decided to share her story so that others can live in hope knowing that you can live well, and potentially for a long time, with metastatic breast cancer.

“I’ve gone from a prognosis of six-12 months to live to 30 years, that’s a huge difference. I've had 28 years that I’ve stolen from cancer,” she says.

“I'm not going to apologise for making you cry because it's an emotional story and you'd have to be hard-nosed if you didn't cry.” 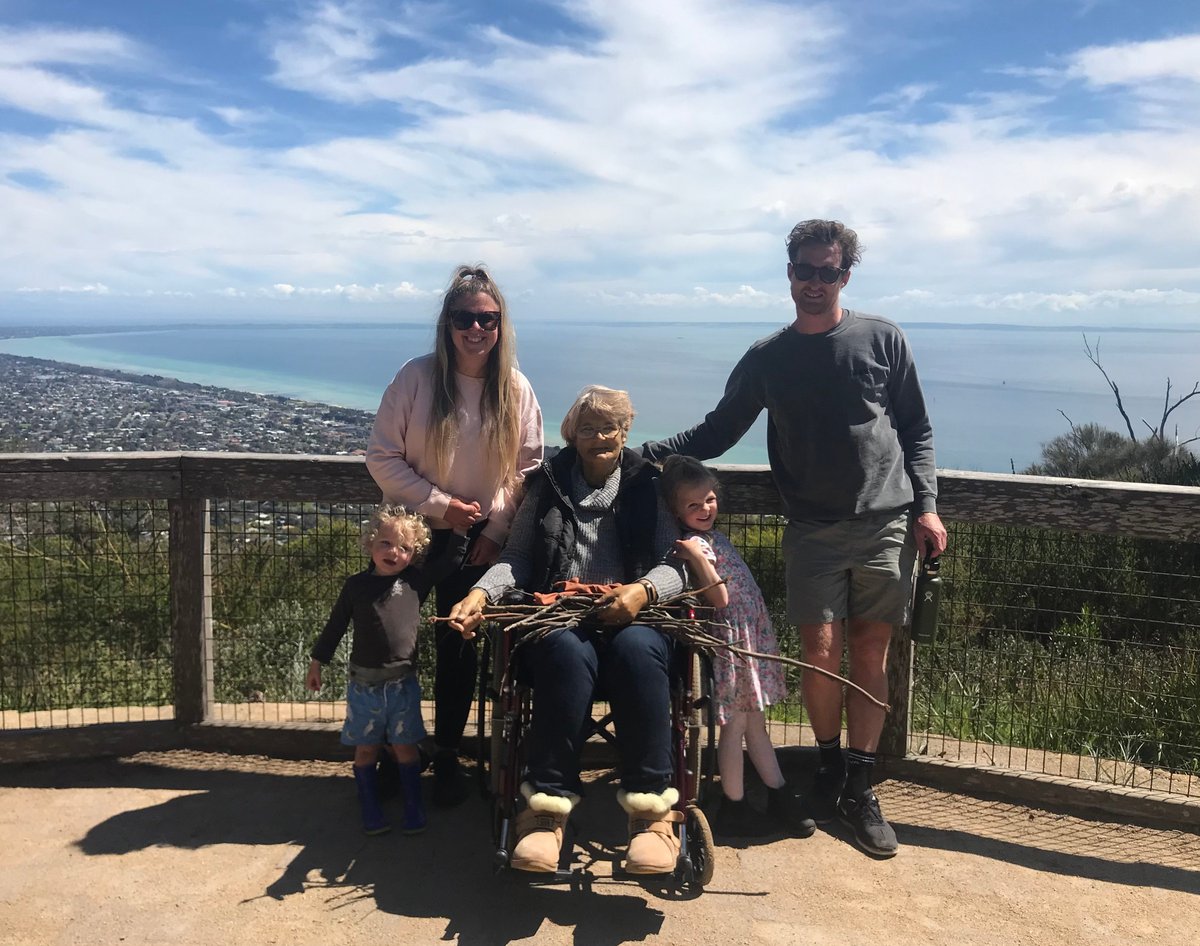 Marlene with her son Mat, her daughter-in-law Jade, and two grandchildren, Summer and River, 2021. Image: Supplied.

Marlene was first diagnosed with breast cancer in 1993, aged only 35. She was a single mother of two, Mat, nine, and Nik, seven.

She felt the lump and her GP didn’t rush on the mammogram because she was so young, but the results came back that it was cancerous, and she needed a mastectomy. Although she was told the surgery was successful, her oncologist delivered a blow; 17 out of the 18 lymph nodes they removed were cancerous and the prognosis was six-12 months, maybe 18 months.

“He told me to go home, get my affairs in order and have quality time with my kids but I said he couldn't just take every bit of hope away. I didn't move until he gave me something. He told me there was a woman on a trial in Melbourne, it almost killed her, it still could kill her, it will kill me,” Marlene says.

Marlene went ahead with it and took part in a High Dose Stem Cell Rescue clinical trial, which was still in the very early stages.

“It was working out how high a dose, how long a dose they could give us without killing us. It was gathering our stem cells prior and giving them back to us,” she says.

This was in 1994. It wasn’t an easy ride and it meant she was separated from her children, but the results were worth it.

“I remember my oncologist saying, ‘Go home. I cannot say this, but go home and live life as if you're cured. Do not lose energy looking back thinking you’re going to die. You're cured. I can't write it down, I can’t even say it out loud, but you’re cured’,” she says.

“So I came home and made a pact that I wanted to stay alive long enough for my sons to be able to look after themselves, to cook a meal, wash their clothes. When I came back, Mum and Dad said I was just like the Walking Dead and it took a long time for me to recover.

“I don't hear the word no. As a single mum there was that burning desire in the back of my heart from day one that I was going to give them a good life. They tell me they had a brilliant life.”

In 2008, on her 50th birthday, she was diagnosed with metastatic breast cancer in her liver and bones.

“I went home, had a huge 50th birthday party. I celebrated and then I started treatment,” she says.

The treatment worked and her bone mets were stable until 2012, when it spread to her pelvic bones. They gradually got worse until they were deemed inoperable. She was looking at a future of pain and immobility, confined to bed because she couldn’t bear weight.

Her oncologist and other specialists said there was nothing they could do. So her nurses found a solution.

“My McGrath Breast Care Nurse rang me a few days later and said one of her colleagues at Monash Medical in Clayton had a team doing cement injections into spines and it was worth a phone call,” Marlene says.

“They'd never done a hip before but said if I was willing to trial it they'd go ahead. Because of where the fractures were they couldn’t get up into the iliac crest to put the cement in so they had to hammer through. The fear was that my pelvis would shatter because it was full of holes and tumors.”

The day after her surgery, Marlene got out of bed and stood up.

How her McGrath Breast Care Nurse helped her.

“Marg has been with me for the last 28 years; she was there from that initial diagnosis. She was the one who found the surgeon that did the cement, and she is the one who has been at the end of the phone, always. I can talk to her about anything. 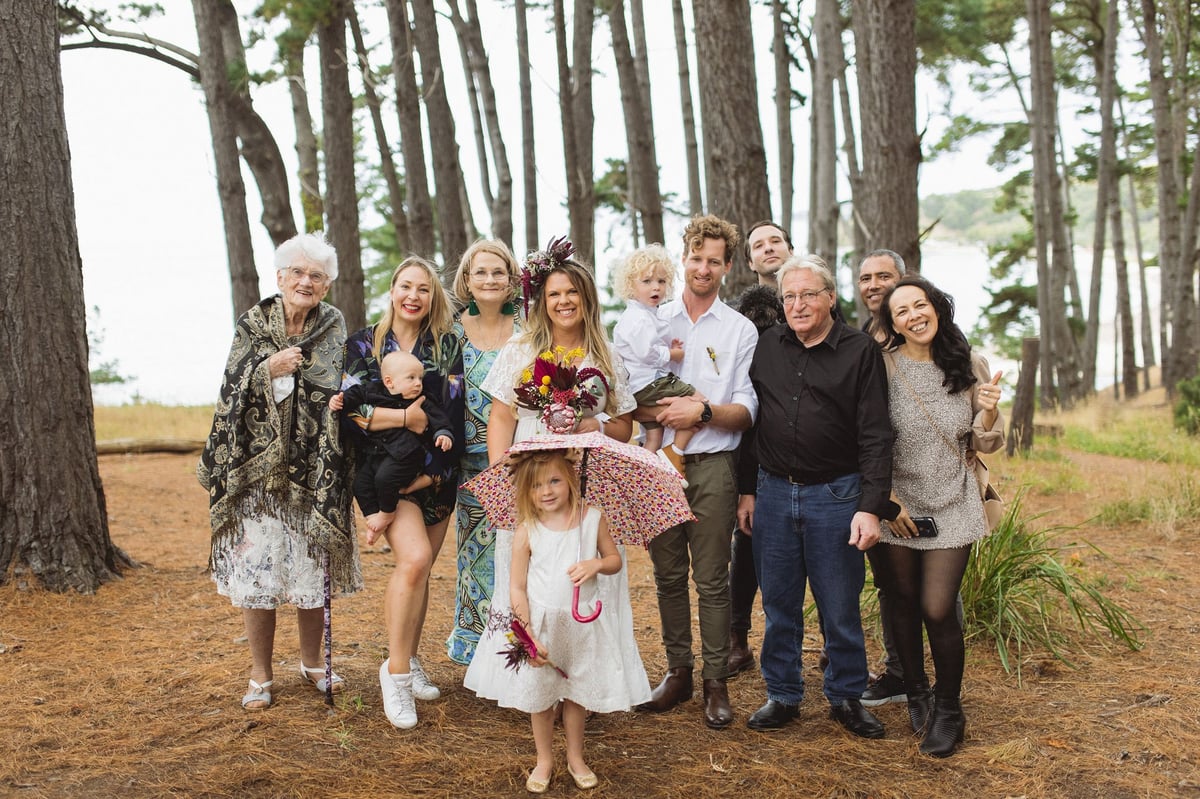 I hear the stories of other people with different kinds of cancer and the crap that they go through to get everything that I've easily gotten. I find it really hard to believe that there's still such a discrepancy between patients. The pathway is not the same for everyone. I was lucky to have Marg.

There has to be people advocating for the ones who haven't got a voice. That’s part of a breast care nurse’s role. If you can't be an advocate for yourself, there should be someone there for you. I hate the thought of someone who is metastatic going through this without any of the resources I've had.”

The joy of grandchildren.

Marlene was never supposed to meet her grandchildren. She wasn't expected to live that long, which is why Bailey six, Summer, four, River, three and Orlando, 14 months, are the icing on her cake. 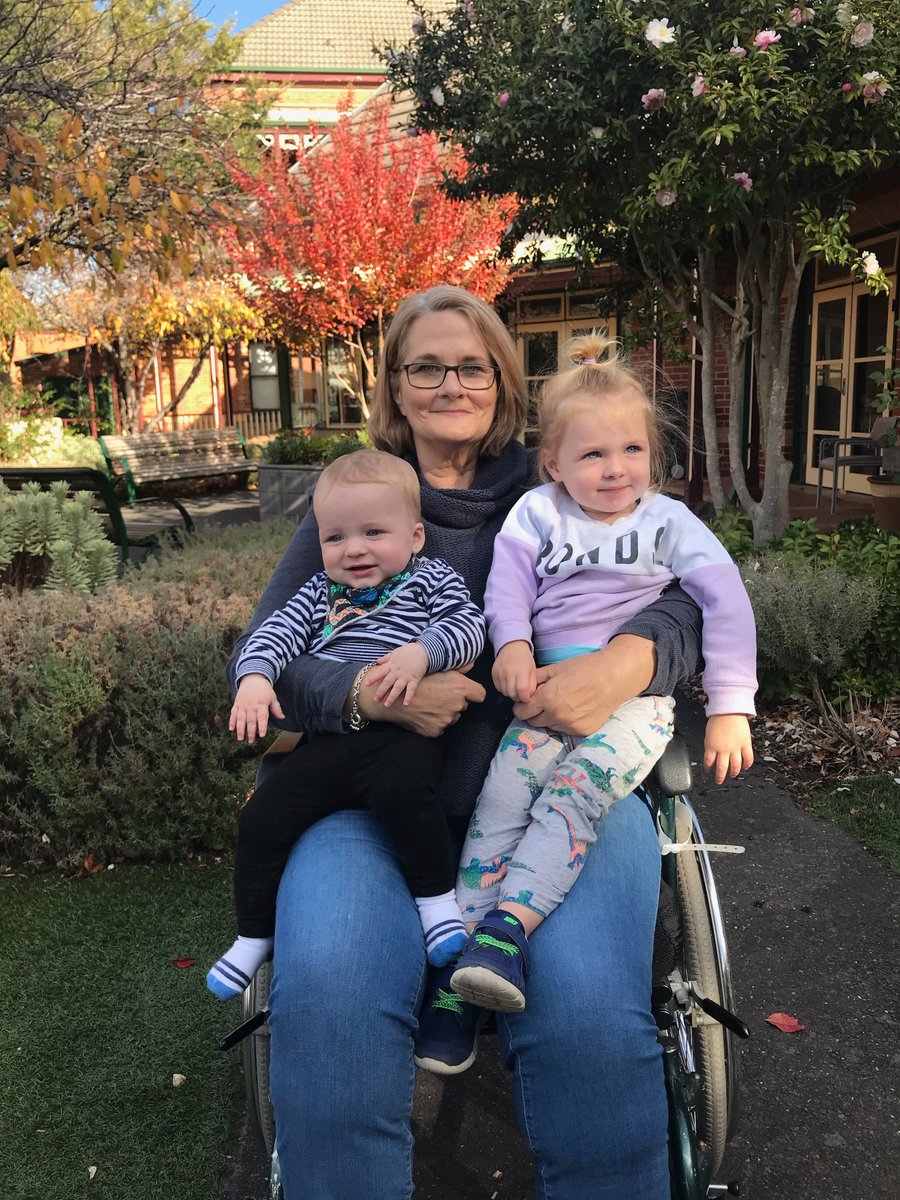 Summer and River with their nan. Image: Supplied.

“There's nothing on my bucket list. I just want to be surrounded by my kids and my grandkids and my friends and my mum with all the chaos that involves. Two weeks ago, we had a visit with my two sons and their wives, and three kids and two dogs, and my mum, and it was chaos. But it was the best chaos,” she says.

“No one has told Summer I'm dying, but I have the oxygen cylinders beside me and she knows how to switch it on for me when Nanna needs oxygen. We have a really close relationship and for the last two weeks she needed to sleep with me every night. She wanted to sleep in my arms, with both hands over our hearts and we slept like that all night. The other day she said to Jade (her mum), ‘Is Nanny dying?’. She said ‘She’s really, really sick, we don’t know,’ then she said, ‘I don’t want Nanny to die, it will make me so, so sad.’

When she lay down with me, she said, ‘Nanny when you die, do you know you float up in the clouds and you meet this really, really, really nice man and you won’t be lonely anymore, but you’ll be in my heart so that’s Ok. And a little baby will be born and you’ll be their Nanny.’ 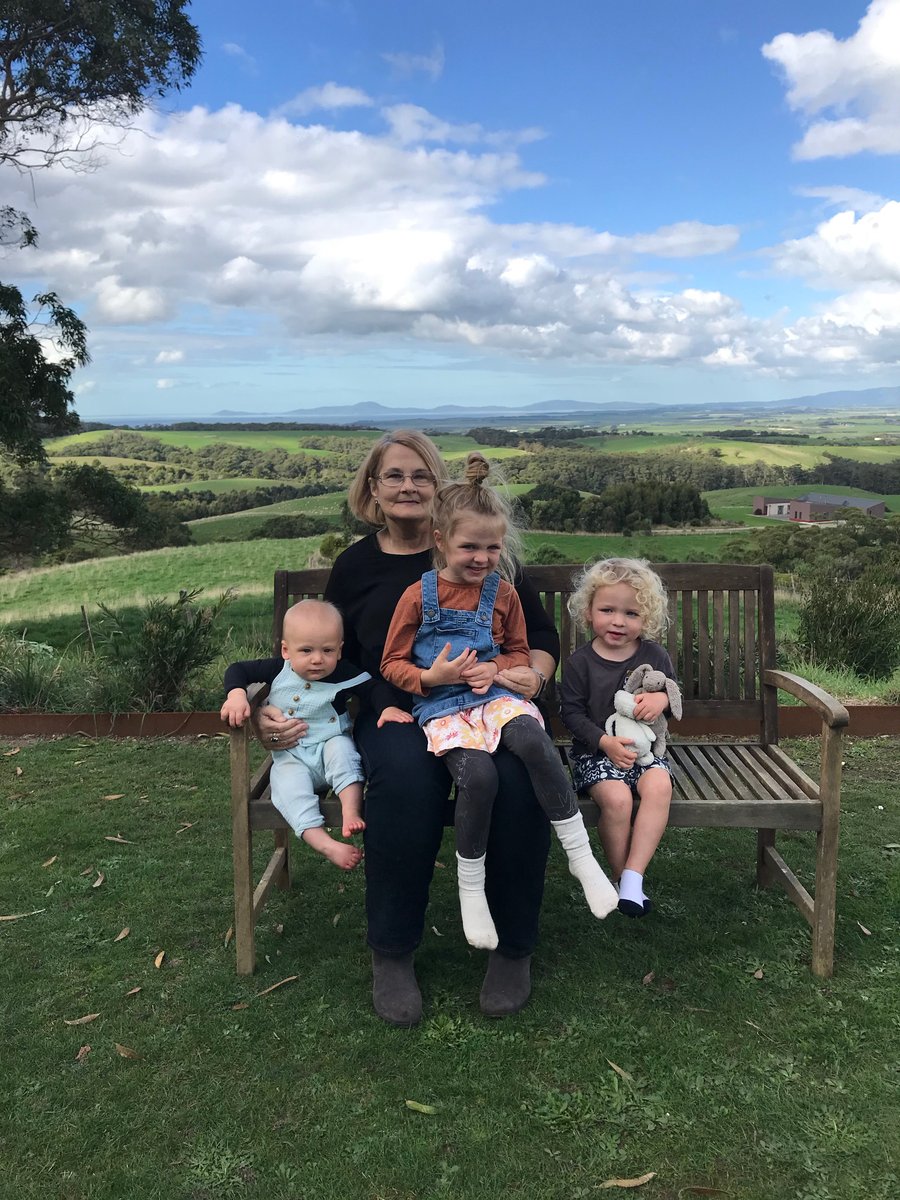 Marlene with her grandkids. Image: Supplied.

The initial plan was for Marlene to spend her end of life at McCulloch House in Melbourne but because of COVID-19 that meant she couldn’t have any visitors and she wanted to be surrounded by family.

“COVID has had a huge impact and we've had to get letters of compassion for my family to be able to leave Melbourne and visit me. When they gave me a diagnosis that I had weeks to live because my liver was shutting down, they let my son, his wife and their two kids visit me even though no visitors were allowed. Apart from the patients and doctors, they were the only people in the hospital. You could hear children laughing and everyone would stop and look at them in the courtyard and go, ‘Oh my God, that’s how it used to be and that's what we hope to get to again’.

“I’ve said it quite a few times, but dying in COVID is a pain in the arse.”

Marlene is adamant that she doesn't want you to feel sorry for her. Although her story is coming to an end, she is at peace with it.

She has done what she set out to do. She gave her children a good life, she saw them grow from boys into good men and she has met her grandchildren. She feels blessed.

“My daughter in law said to me today, ‘How do you feel, Mum?’ And I said I feel really good, I’m not scared, I’m sad because I won’t see my grandchildren grow up,” Marlene says.

“When I was diagnosed with mets (metastatic breast cancer) I said I want my boys to have partners who will climb into bed with them the day I die and hold them. They’ve got them.

“Now they are both married to the most amazing, supportive, strong women that will hold them up. We were the three musketeers for so long and it’s going to be really hard, I know that. That’s the part that makes me sad, leaving them. I’ve looked after them and protected them all their lives.” 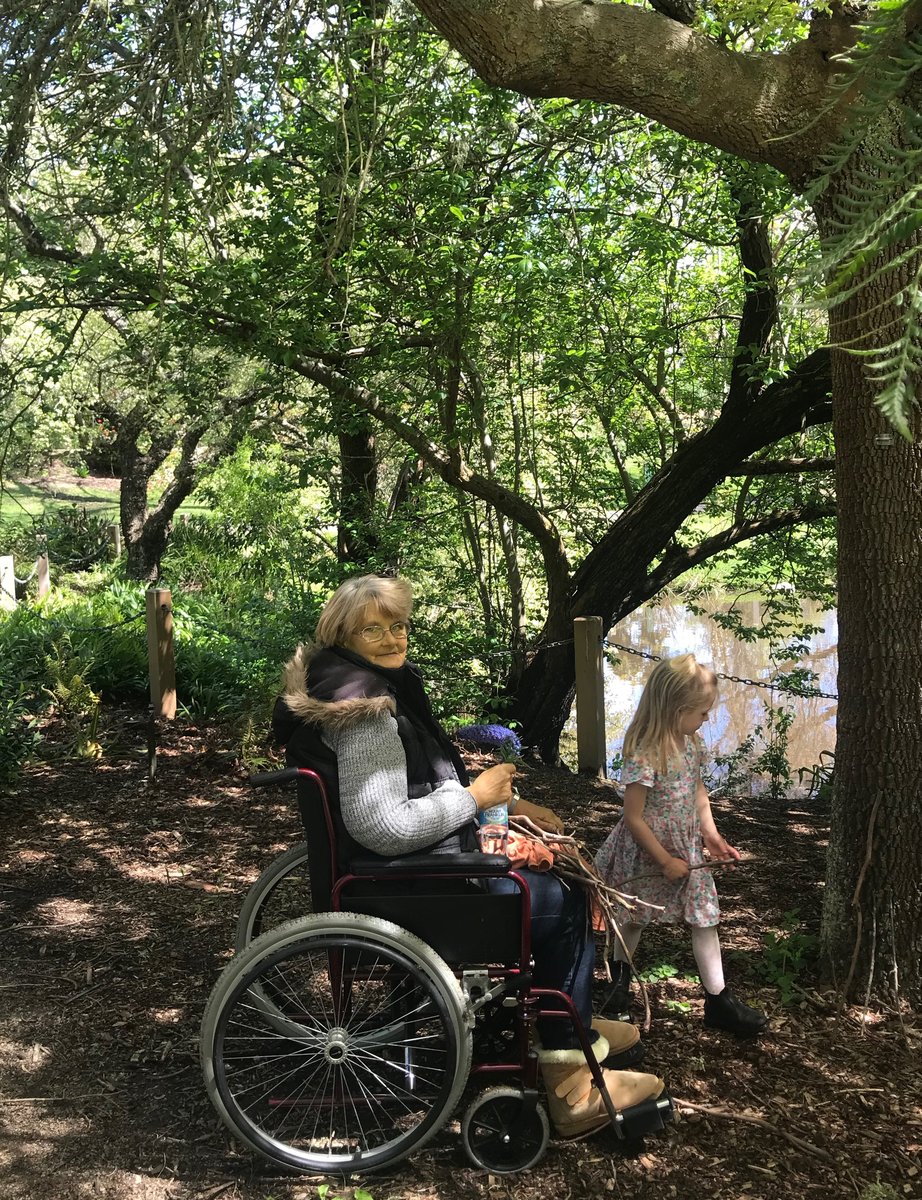 Knowing she was living on borrowed time also gave Marlene a strong drive to help others. She was involved with the Breast Cancer Network Australia, founded a support group to help other women navigate breast cancer and brought dragon boating to Gippsland to encourage other women to focus on their health.

One of her proudest achievements was holding writing workshops in rural Victoria for cancer patients so women could tell their stories. In 2006 they published a collection, Heartsongs in the Key of C: Women Writing About Breast Cancer.

“I realised how powerful the written word was,” Marlene says.

“I'm talking to you so that when my grandkids are teenagers and they're wondering about their Nanny, they can get to know me. I used to be a good writer, but I can't do it anymore so this will do. And this is only the second 30 years of my life, but it's okay, because everyone else - my mum and my brothers - will fill in the first 30 years for them.”

McGrath Breast Care Nurses help individuals and their families affected by breast cancer by providing invaluable physical, psychological and emotional support, from the time of diagnosis and throughout treatment. This support is available for free and without a doctor’s referral. To find your nearest nurse visit the McGrath Foundation.