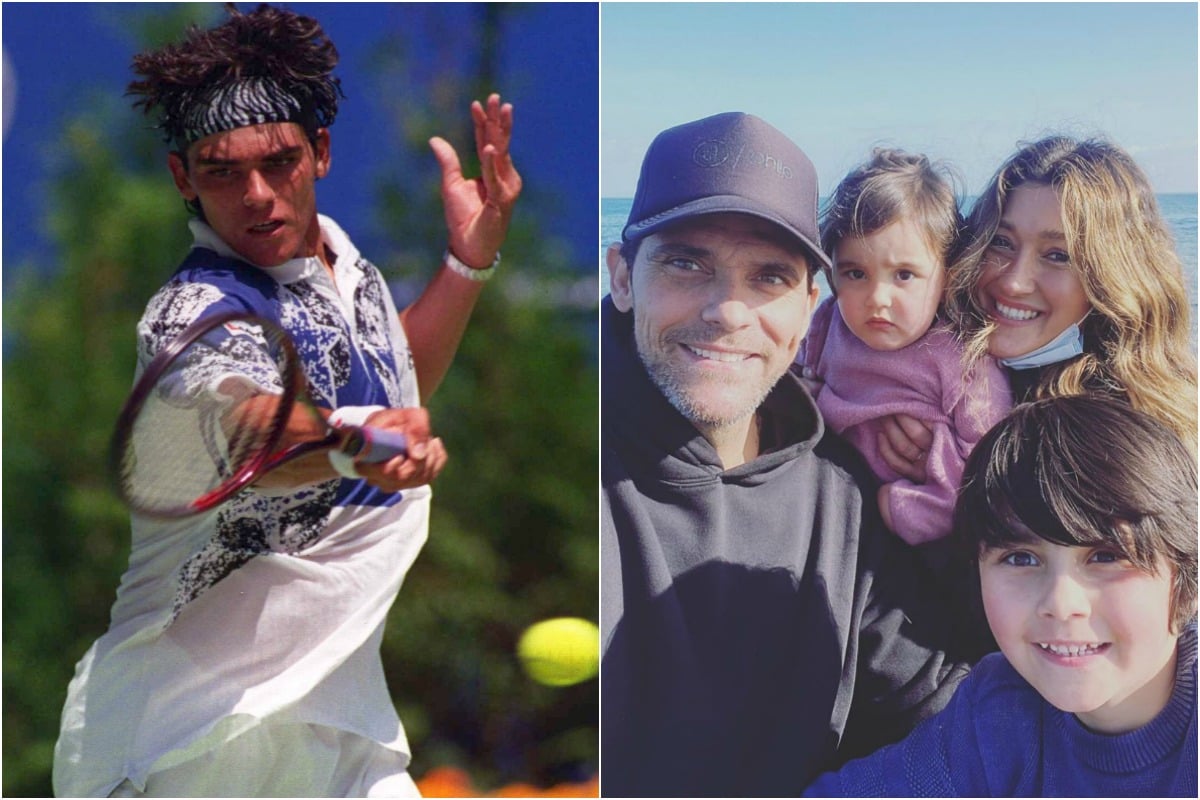 As the very first contestant to be "unmasked" on Channel Ten's The Masked Singer we're officially back in the world of revisiting the lives of Australian celebrities we had somewhat... forgotten about.

Philippoussis was a huge name in the 90s and early 2000s, but since his retirement from tennis in 2015 the 43-year-old has been living a relatively under-the-radar life with his young family.

WATCH: Mark Philippoussis appeared from underneath an echidna on The Masked Singer on Sunday night.

Here are all the things we forgot about the professional tennis star:

A reoccurring injury forced him to retire early.

Nicknamed "the Scud" because his serves were 'tennis ball missiles,' Philippoussis reached a career-high singles ranking of World No. 8.

His biggest achievements were two Davis Cup titles in 1999 and 2003, and the finals rounds of the 1998 US Open (which he lost to fellow Aussie Pat Rafter) and Wimbledon in 2003 (which he lost to tennis legend Roger Federer). 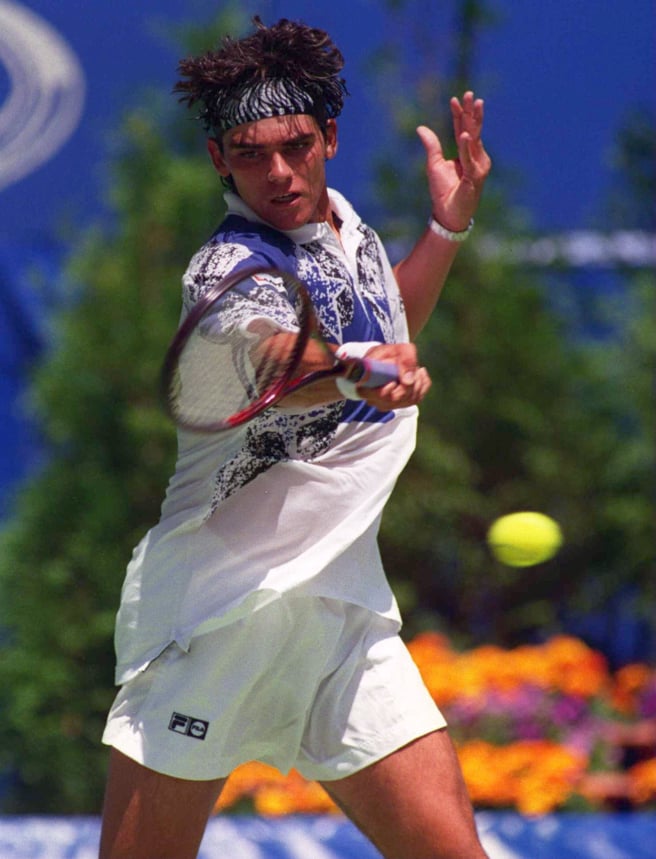 He had an obvious talent, but was criticised throughout his career for being a "wasted talent" with many believing he underachieved and spent more time on flashy cars, celebrity dates and his social life.

His tennis career was cut short due to a debilitating and reoccurring knee injury that kept seeing him sidelined in the last few years of his career.

Philippoussis represented Australia at three Olympics Games - Atlanta in 1996, Sydney in 2000 and Athens in 2004 - and won eleven singles and three doubles titles throughout his troubled time in the sport.

He hasn't played a professional game since 2017.

In 2014, he told Fairfax: “If my guardian angel came to me and said let me make a deal with you. ‘You’re going to be a pro tennis player, get to eight in the world, you’ll lose in the final of two grand slams and win two Davis Cups but you’ll get injured and your career would end sooner than you want, would you take that?’ I’m like absolutely yes. I’m on board."

He had a stint on reality TV.

In 2007 (thanks to his reputation as a 'bachelor'), Philippoussis starred in the first and only American reality TV series Age Of Love. 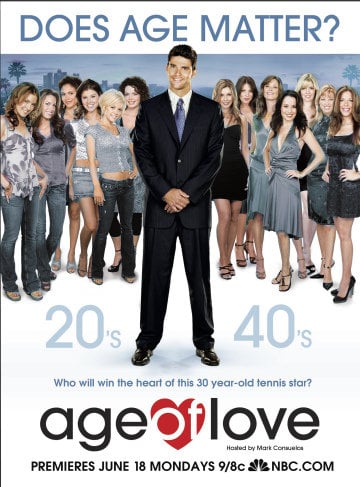 The premise of Age of Love was basically like old school The Bachelor. A then 31-year-old Philippoussis dated one or two women per episode until there was a final three who flew over to Australia to meet his family.

In the end, one of the girls was terrified of flying and refused to get on the plane, so eliminated herself from the competition.

25-year-old Amanda Salinas was chosen as the winner but after the finale aired Mark refused to comment on the outcome of the relationship.

In 2009, Salinas told Sydney Confidential they stayed together for five months post-filming.

He was declared bankrupt.

Over the years Philippoussis earnt more than $8 million on the court and millions more in sponsorship deals, but in 2009 he found himself in a million dollar legal battle after finding himself in debt.

Aged 32 at the time, Philippoussis was sued by a finance company for failing to pay the mortgage of his home and was declared bankrupt.

He told the Herald Sun it was the "toughest time of his life."

"He bought some outrageous things. He loved gadgets - he had three cell phones at one stage. He just didn't think things through," she told Sydney Confidential.

His father was charged with child molestation.

Nick Philippoussis was born in Greece, where he was a banker and businessman, and moved to Australia in 1973 with his Italian-born first wife after seeing the show Skippy on TV.

A former soccer goalkeeper himself, Philippoussis Snr introduced his son to tennis at the age of six and coached him on-and-off throughout his career. 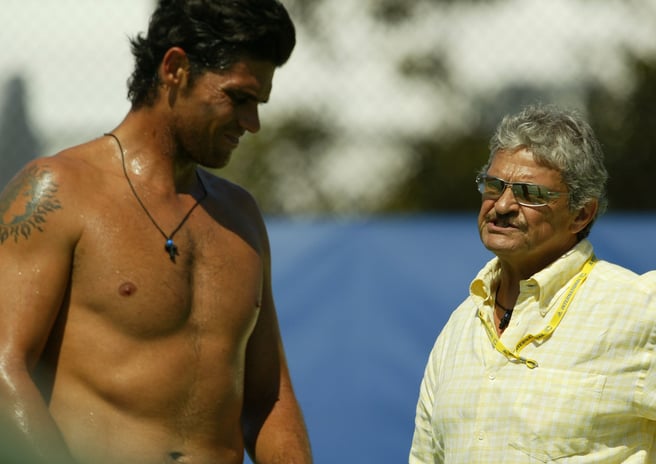 Mark with his father Nick during a training session at the Sydney International Tennis Centre on January 11, 2004. Image: Nick Laham/Getty
ADVERTISEMENT

In 2017, he was arrested on child molestation charges in San Diego, where he lived with his second wife.

The then 68-year-old was accused of molesting two nine-year-old girls who were taking tennis lessons at his Californian home, and was charged with sexual intercourse/sodomy with a child 10 years or younger, three counts of lewd and lascivious acts with a child under 14 and oral copulation with a person under 18.

The tennis coach pled not guilty to all 14 charges, and his family (including Mark Philippoussis) appeared in court supporting him, with Philippoussis Snr's lawyer telling reporters at the time they were "shocked" by the allegations. 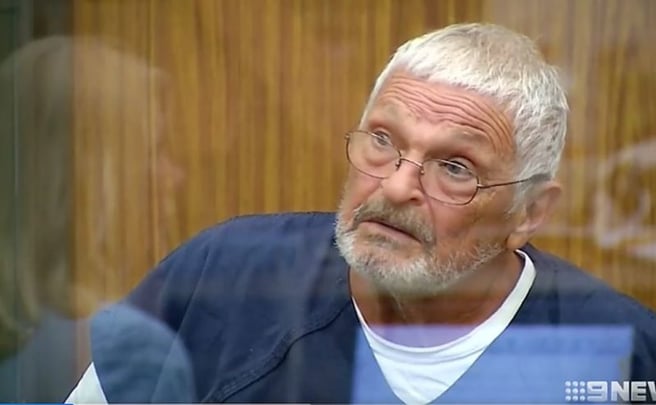 In 2018, it was ruled that he would no longer face trial in the US because he was "completely incapacitated" after suffering a stroke in prison.

A Californian judge dismissed the charges after the doctor ruled that he was "a step above a vegetative state" and not fit to stand trial.

In July 2018 the Daily Mail reported, "He is reportedly catatonic and had been under guard and handcuffed to a bed in a public hospital for several months."

He had a string of high profile relationships.

Philippoussis's love life was tabloid gold back in the day thanks to the string of high profile relationships he enjoyed.

He dated American actress Tara Reid for three years until 2003, and Australian singer Delta Goodrem for nine months in 2004.

Goodrem was diagnosed with Hodgkin's lymphoma while the pair were together, with her song 'Out Of The Blue' about Philippoussis's support during that time.

Their relationship ended, reportedly, because Philippoussis cheated on her with American heiress Paris Hilton. 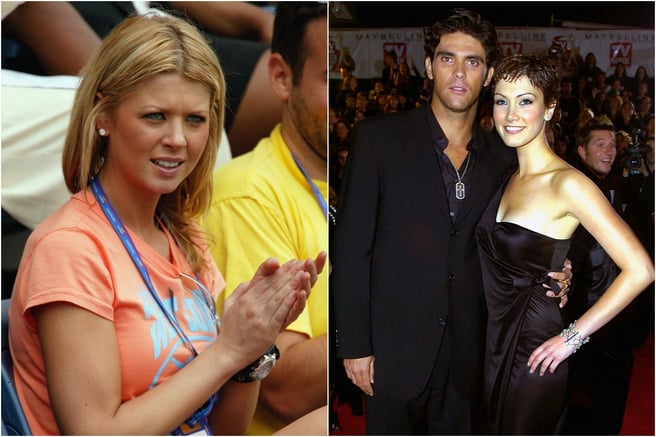 Tara watching Philippoussis play tennis in 2003, and with Delta Goodrem at the Logie Awards in 2004. Image: Al Bello/Getty.

The Sunday Telegraph reported Paris as saying that Philippoussis had dumped Goodrem because he was "bored."

But Philippoussis told the Sydney Morning Herald they mutually parted ways "because of their careers."

Philippoussis proposed to model and actress Alexis Barbara in 2005 after five months together, buying the then 18-year-old an engagement ring that was reported at the time to be worth $200,000. The couple split after two years together.

He dated American actress Shannon Elizabeth between 2007-2008, and was engaged to actress and author Jennifer Esposito briefly until their split in 2010. 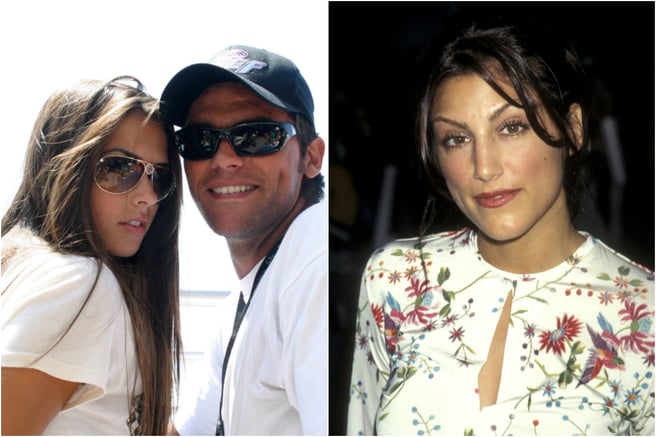 Mark Philippoussis has been engaged three times. He proposed to Alexis Barbara (left) in 2005, and Jennifer Esposito (right) in 2010. Image: Amy Tierney/WireImage/Getty.

In 2012, Philippoussis met his future wife model Silvana Lovin. The couple wed in September 2013 and have two children, Nicholas, six, and Maia, two. They now live in Melbourne, Australia.

When asked about his past relationships, Philippoussis told Sydney Confidential in 2015: "I’m glad I did that and got it out of my system. That was my stage. It was my way of living and learning and growing."

He lives in Melbourne with his family.

Last week, Philippoussis celebrated his seven-year wedding anniversary with wife Silvana writing on Instagram: "Thank you for being the incredible beautiful person you are, for motivating me to grow and better myself everyday in every way, the amazing loving mother to our two beautiful children Nicholas and Maia."

Happy 7 year Anniversary my love @sphilippoussis doesn't feel a day over 20 years! 😜♥️ Thank you for being the incredible beautiful person you are, for motivating me to grow and better myself everyday in every way, the amazing loving mother to our two beautiful children Nicholas and Maia. Thank you for these amazing beautiful 7 years and I know no matter what life has in store for us we will be more then ok because we have each other and together we can achieve anything! 😘♥️🙏🏻🌏 #happyanniversary #7years #sograteful #blessed #excitedaboutthefuture #thankyou #loveyou #together

The couple welcomed their son Nicholas in 2014, and daughter Maia in 2018. They were based in San Diego until March last year and then moved back to Melbourne, Australia.

"We're absolutely loving being back home, and it's always been on the cards to move back," Philippoussis told 7News in 2019.

"Nicholas is ready for school now, so it was just good timing to move back here and plant some roots."

His Instagram is filled with photos of his family, who are currently in coronavirus lockdown like the rest of Victoria.

Over the past few years, Philippoussis has been dabbling in fashion and coffee, releasing a tennis collection capsule with the clothing brand Jacques in 2018. He's currently working on a luxury 'basics' clothing line called "As We Create," that is due to be released in December.

In an interview with Now To Love after his elimination from The Masked Singer last night, Philippoussis said his son called him "the coolest dad ever" after watching him sing on the show.

"It brought a tear to my eye. Just for that reason alone it was worth it," he told the publication.