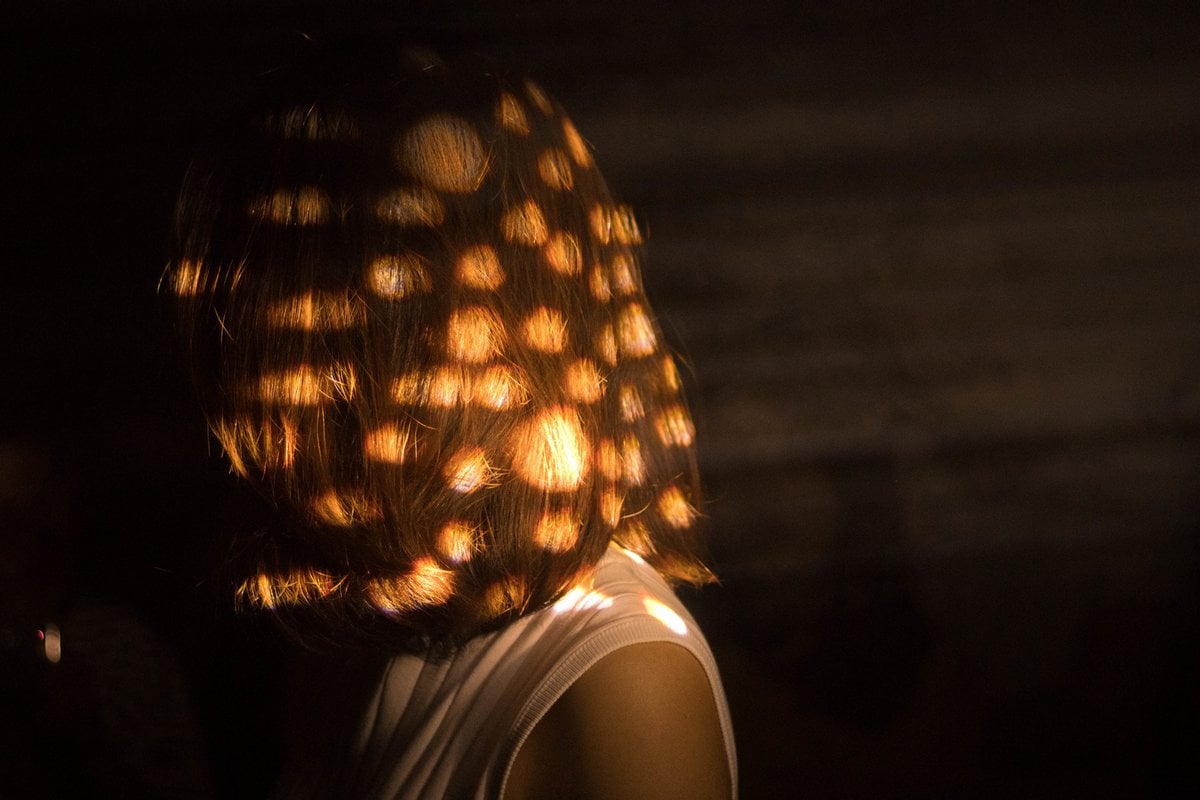 I wrote this for the women who don't have a voice.

Women whose voices have been forever silenced by a man or by their own hand. Women who cannot find the right words or a safe space to say them, and women who are still just young girls, yet to have the darkest chapter of their story unfold. Statistics yet to be added, trust yet to be broken.

I did this for the wife and mother I used to be, who spent years hiding my pain and fear.

Watch: Women and violence: the hidden numbers. Post continues below.

I was a woman belittled and controlled by a charming man with money and status. I was a wife whose husband seemed to enjoy destabilising her.

I was a mother who was stuck with a man who did not believe in consent, and did everything in his power to make me feel guilty, ashamed and scared if I said no.

I am now a survivor of a man who denied any wrongdoing and left me with nightmares of attacking him, waking myself up screaming after gouging his face in a rage.

Some days I wish he had hit me instead. Because unlike a fist to the face, there are a raft of domestic abuses that will always remain invisible to the naked eye and completely unseen to those around you.

In my experience, most secretive and unspoken about is marital rape and the lack of consent within relationships.

Luckily for me and after many failed attempts, I found the courage to leave the marriage but not before he tried to abuse me in my sleep one last time.

That time I woke. That time I took notes. After two hours of lying there utterly frozen, I knew what I had to finally do.

When I was trying to make the decision on whether to report my ex-husband, I had all the usual 'will anyone believe me' fears, and worse still, if I go through the trauma of prosecuting him and reliving all those moments, 'will he be found guilty?'

Like most women, I have heard the horror stories of cross-examination and know the statistics of conviction are low.

In the case of marital rape, it is your word against your ex-husband. And in my case, while I struggled on legal aid, he had a particularly nasty barrister already destroying any shred of dignity and self-esteem I had left throughout our property settlement and custody proceedings in the family court.

There was just no way I thought reporting what he had done would be safe or successful.

And then, Hannah Clarke was murdered.

Suddenly, coercive control was in our mainstream dialogue and I was filled with a whirlpool of anger and grief, knowing I may finally be able to give voice to what had happened to me, and perhaps just become a number on record. A number to show we are here, this is happening.

I wanted to vindicate the seemingly irrational behaviour of mothers like me, who had been told they were crazy, they would lose their children if they left, or were romanced back into submission and held their breath for a happy ending.

Women who were with men that took cheap liberty of their soft, beautiful bodies and minds with an arrogant sense of entitlement and ownership.

The injustice and rage overcame my fear, and I picked up the business card of a detective that had sat in my jewellery box for a year.

As I made the call, I had no idea of the process and how that call would lead me to a small couch in an innocuous red brick house in suburbia.

Two detectives sat in an open space watching black and white grainy vision. As I had walked past them, the soft, scared sound of a child's voice came from a crackling on tape as he told his story through a video recording. On the screen, a little boy sat on a couch. It was the one I was now sitting on.

I was stepping into a different world and I felt every last cell of my body constrict, my flight response in full-blown hysteria. The gravity of what I was doing had hit home.

Did I imagine it all? Did he really do this to me or am I over-reacting?

Sitting alone in the interview room I was grateful that there was a couch for me to sink deeply into, not a hard, grey desk and a room full of stale, criminal air.

There was no guilt-inducing two-way glass, just four normal walls, paper thin and probably once scattered with the usual homely artwork of children, posters or family photos.

On the small coffee table sat a box of tissues and an electronic recording device. I thought of what it must have heard over the years. My stomach clenching just a bit harder.

The recording played on just outside my door and two female detectives somehow did their job of listening to the child’s story. I put one finger in my ear closest to the door to block out any more of his sad voice reaching my already broken heart. 'I am doing this for you too, little one.'

As I waited for the detective, I began to turn inside out, slowly rising to the ceiling as if my spirit was leaving my body, viewing the scene from the outside, as if through the CCTV camera which sat in its black, glassy orb on the wall.

It was all so utterly foreign to me. And I had no proof, no bruises, no body fluids, nothing. Why do I deserve to be here? Surely I am wrong?

Then I fell. Back to the couch, back to the day, hour, minute and second where I was about to finally tell someone with authority what had happened to me. To see if what I had suspected was abuse, actually was. This was my time to go on the record.

He walked in, sat quietly, asked me questions and just listened.

He asked how many times, how often, how it unfolded.

He asked me to draw a picture of the room, what side of the bed I was on, how I was positioned that last time. It was like my blood and guts were being pulled from me as I unravelled in front of this man, spewing out years of abuse.

Telling tales of 17 years of sexual abuse that I thought was simply part of my role as a wife.

Throughout it all, he just listened. There was no judgement, and I felt heard. My wounds were no longer invisible. It was out there, the recording device capturing it all.

My story is invisible to everyone who knew me.

'Your life looks so perfect,' they said. 'At least he doesn't hit you,' my mother said.

Unlike physical domestic abuse or assault, the damage he caused to me was insidious and gradual.

It began with very subtle financial control, just enough to see me utterly dependent on him.

It only became worse after I gave up work to have children, before developing post-natal depression. Not long after, he moved us away from my family to his home country, not too far away, but enough to have me separated from my mum, friends and everything I could safely depend on.

There was continual control – sexual and financial abuse which pushed me to near insanity, followed by his complete attentiveness where he would 'rescue' me and comfort me like a sick animal. He told me quietly I had problems, and over almost two decades, he whittled me down to a shell of the strong woman I had been when we first met.

He had always pressured me to have sex, using it as a currency within our relationship and sulking for days on end until I gave in to him. The atmosphere was dangerous at home, and while he never hit me, I felt too scared to speak until he had his way with me.

I drank to hide from him, and I drank to escape my world. He knew, he must have.

I would wake up not long after going to bed, red wine having carried me away, with him on me, inside me, doing things I didn’t consent to. A passed out woman and a body in his bed that couldn’t protest.

After we separated, I told three very close friends what he had done to me in my sleep over and over since 2007.

Yet instead of support, no one seemed to care. They gave the obligatory head tilt and 'aww', but terrifyingly, it appeared non-consensual sex was just an occupational hazard of being in a long-term relationship.

He was my husband, after all, and the lack of bruises seemed to make it easy to sweep under the carpet. Not stain the perfect suburban family lives we all lived.

I confided in them yet they continued to involve him in their social circles, which increased my feelings of resentment and entrapment. They knew, yet they seemingly didn't care. So what good would reporting him to the police be?

It had taken a long time for his control and ownership over me to mutate enough into a reportable crime that I could clearly see, and with the tragedy of Hannah, one that was now visible in our society.

I finally found the strength to leave the marriage after nearly two decades. I realised I had to do something before I broke down once and for all. It then took another two years before I found the courage to 'out' his crime.

In reporting him, I was standing up for women who had lost their voices. Women who have had to fight harder because the abuse is invisible to an outsider.

Perhaps my statement will one day help his new fiancé, who slept in my old bed, the same place his hands took what was not his.

Perhaps you, reading this. Maybe my small voice in a growing choir will give you the courage to say 'no more'.

At the end of the interview, I was asked if I wanted an investigation.

I already knew my options, and really, my chances against him seemed so low. But more importantly, I did not want my children to know.

This, I could carry. This was something I could live with. Not them though, their little lives already shattered enough from the fallout of my leaving him. The possibility of him being named, and their lives being affected forever.

Walking out of the room, I again thought of all the women before me and after. We are still living in silence. The mountain is still there in front of us.

I decided to leave my statement as just that. On the record. Just in case he does it again.