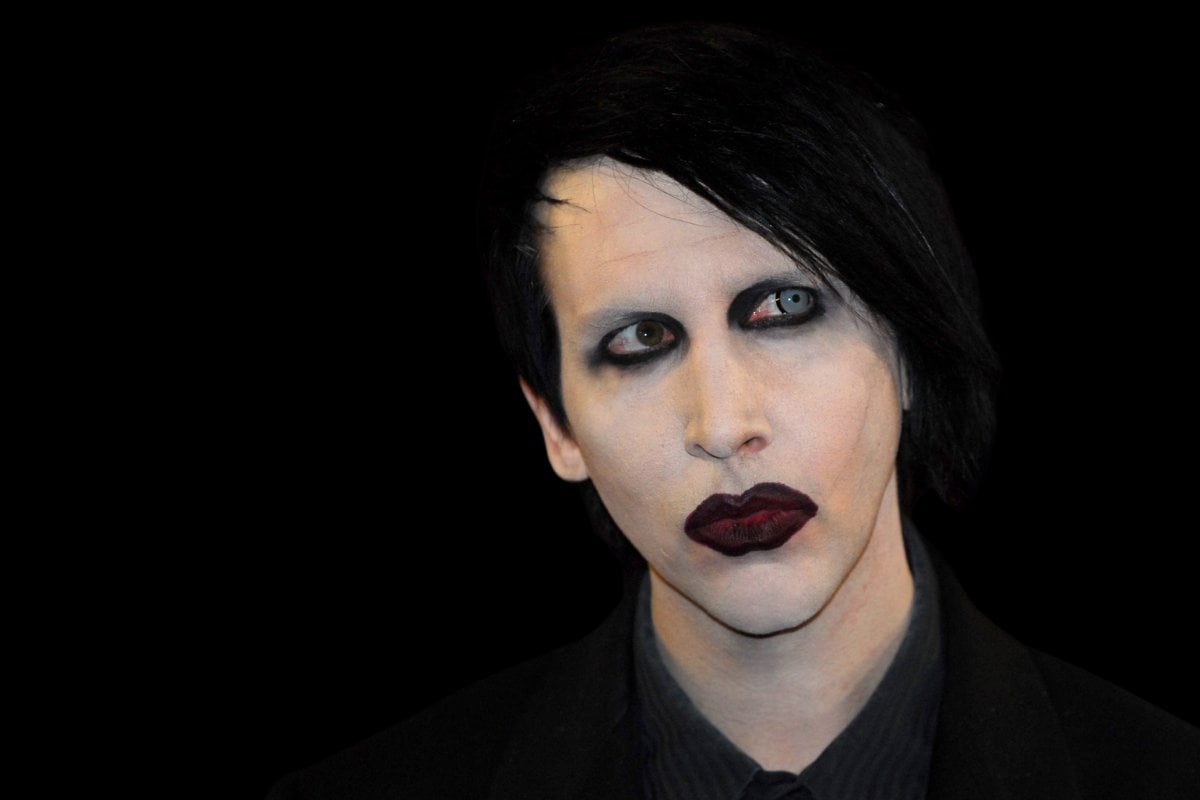 Marilyn Manson has been in the headlines this week following allegations made by his former partner, Evan Rachel Wood. The actress alleges the shock rocker subjected her to “horrific abuse”.

But if we wind back the clock, Manson has been in the headlines his entire career over a series of dark and disturbing incidents.

Read: Evan Rachel Wood and four other women have accused Marilyn Manson of "horrific abuse". Here are their stories.

He was born Brian Warner in Canton, Ohio, in 1969. His dad Hugh, a Vietnam vet who Manson says had a “violent temper”, was a furniture salesman, while his mum Barbara was a nurse. Both parents were religious – his father Catholic, his mother Episcopal – and he went to a Christian school. He learnt about Revelations, and would have “nightmares” about the Antichrist.

As a child, Manson says he spent a lot of time in hospital, for things such as pneumonia and allergic reactions. He told Rolling Stone that his mother had Munchausen syndrome by proxy, which is when a caregiver induces symptoms of illness in a child.

“I didn’t find out about the Munchausen until later in life, and I’m not sure how far back she had it,” he said. “What I can say is that mental illness runs in the family.”

Years later, when Manson started making money from his music, he says his mother convinced him to have his long earlobes shortened by a plastic surgeon, even though he didn’t want to.

“But that was my mother being the way that she was,” he told Rolling Stone. “It was her suggestion.”

Manson’s mother also told him that when he was eight or nine, an intruder broke into their house and tried to smother him with a pillow. He couldn’t remember the incident, but even now, he can’t go to sleep without the TV on.

After finishing school, Manson moved with his parents to Florida, and started studying journalism. He had articles published in a music magazine, and began making music himself. He and guitarist Scott Putesky formed a band, with the members all giving themselves the first name of a sex symbol with the surname of a serial killer.

In the 1990s, Marilyn Manson – as their band was called – built a huge following, and Manson himself became notorious as a “shock rocker”. He seemed to always be at the centre of controversy, much of it of his own making. He claimed he was a minister in the Church of Satan, and he called his band’s 1996 album Antichrist Superstar.

In the US, Christian groups spread reports of horrific happenings at Manson concerts, including bestiality taking place on stage and children in the crowd being forced into sex acts. Although these weren’t true, Manson did, famously, drag a broken beer bottle across his chest during a San Francisco concert, and he would regularly rip and burn bibles.

Christian groups protested outside his concerts. Florida schools threatened to expel kids who attended. South Carolina paid him $40,000 not to play there.

It all got very serious in 1999, after the Columbine High massacre, where Eric Harris and Dylan Klebold shot dead 12 students and a teacher and injured 24 other people before killing themselves.

Almost immediately, stories began circulating that Harris and Klebold were Manson fans and had been inspired to kill by his music, supposedly even wearing his t-shirts as they carried out the massacre. “Killers Worshipped Rock Freak Manson” read the headline in The Sun.

Later, it was revealed that Harris and Klebold didn’t even listen to Manson, let alone wear his t-shirts. But the belief persisted.

Manson told The Guardian in 2017 that the Columbine era “destroyed my entire career at the time”. 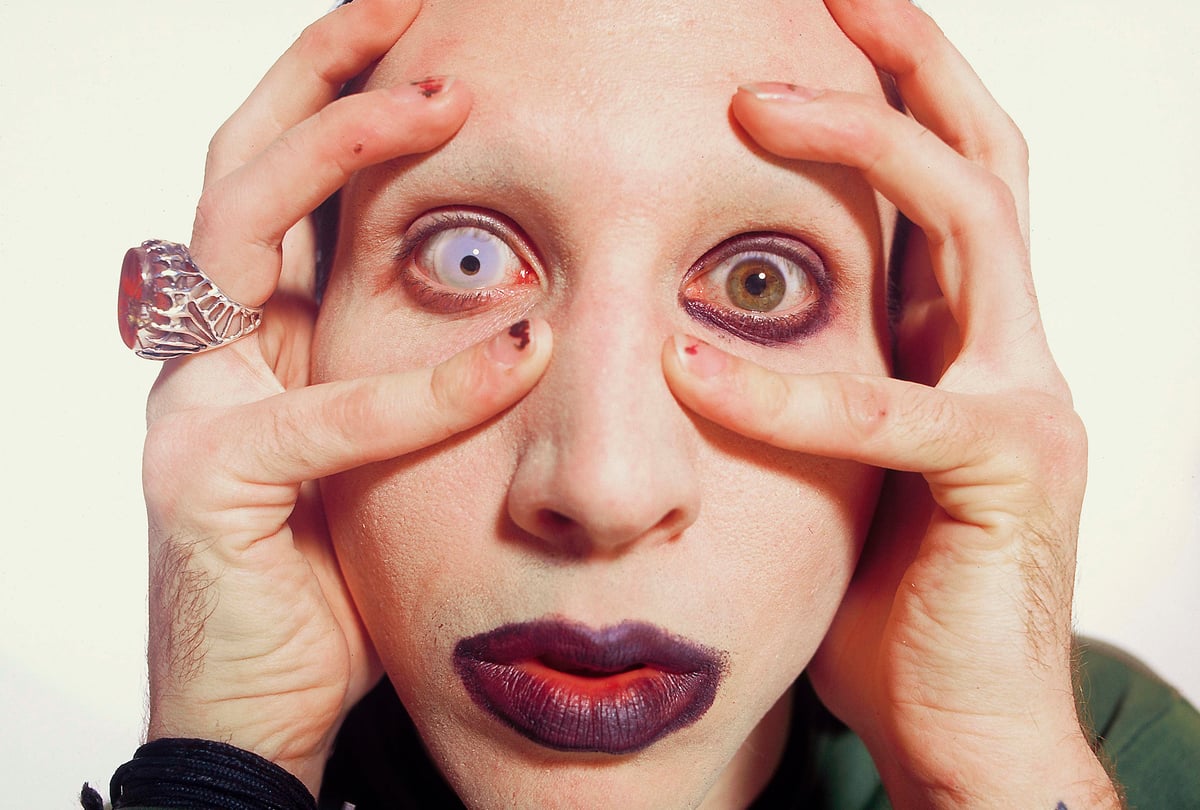 In 2002, Manson had a wrongful death suit filed against him by Maria St John, the mother of Jennifer Syme. Syme had been the girlfriend of Keanu Reeves. In 1999, Syme had been pregnant with Reeves’ child, Ava. Sadly, Ava was stillborn. The grieving couple split up but stayed close.

In 2001, Syme went to a party at Manson’s house. She was driven home, but then got into her car to return to Manson’s house. On the way, she hit three parked cars. She wasn’t wearing a seatbelt and was thrown from her car, dying at the scene. Reeves was one of the pallbearers at her funeral.

St John, in her suit against Manson, accused him of supplying her daughter with cocaine and encouraging her to drive while inebriated.

In a statement, Manson said Syme was sent home safely with a designated driver, and got into her car “for reasons known only to her”.

“Her death is sad and tragic,” he added.

The suit was settled out of court. Years later, Reeves said his life was never the same after Syme died.

“Grief changes shape, but it never ends,” he told Parade.

That wasn’t the only suit filed against Manson. Also in 2002, a security guard, Joshua Keasler, claimed Manson had assaulted him during a concert the previous year in Michigan. In the suit, Keasler claimed Manson grabbed him, wrapped his legs around his neck and ground his sweaty g-string-covered groin into his head and neck. 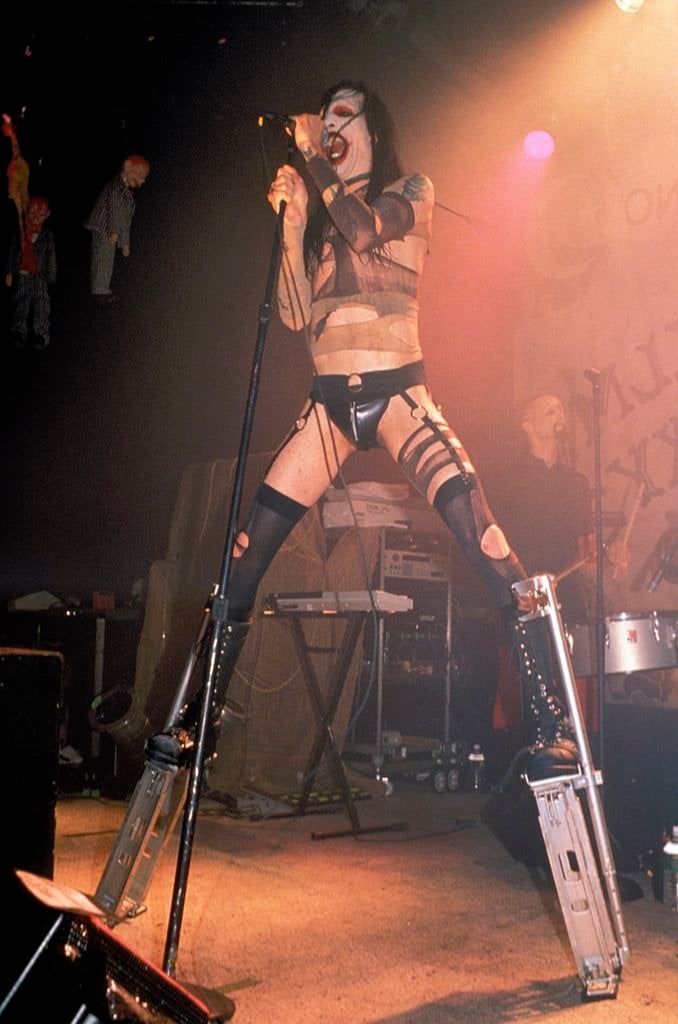 “This was a vicious sexual assault witnessed by 20,000-some people," Keasler’s lawyer John Nickola said.

Manson reached a settlement with Keasler. He was also fined $4000 for disorderly conduct.

Over the years, Manson has had several long-term relationships. In 1999 he got engaged to actress Rose McGowan. She broke it off two years later. 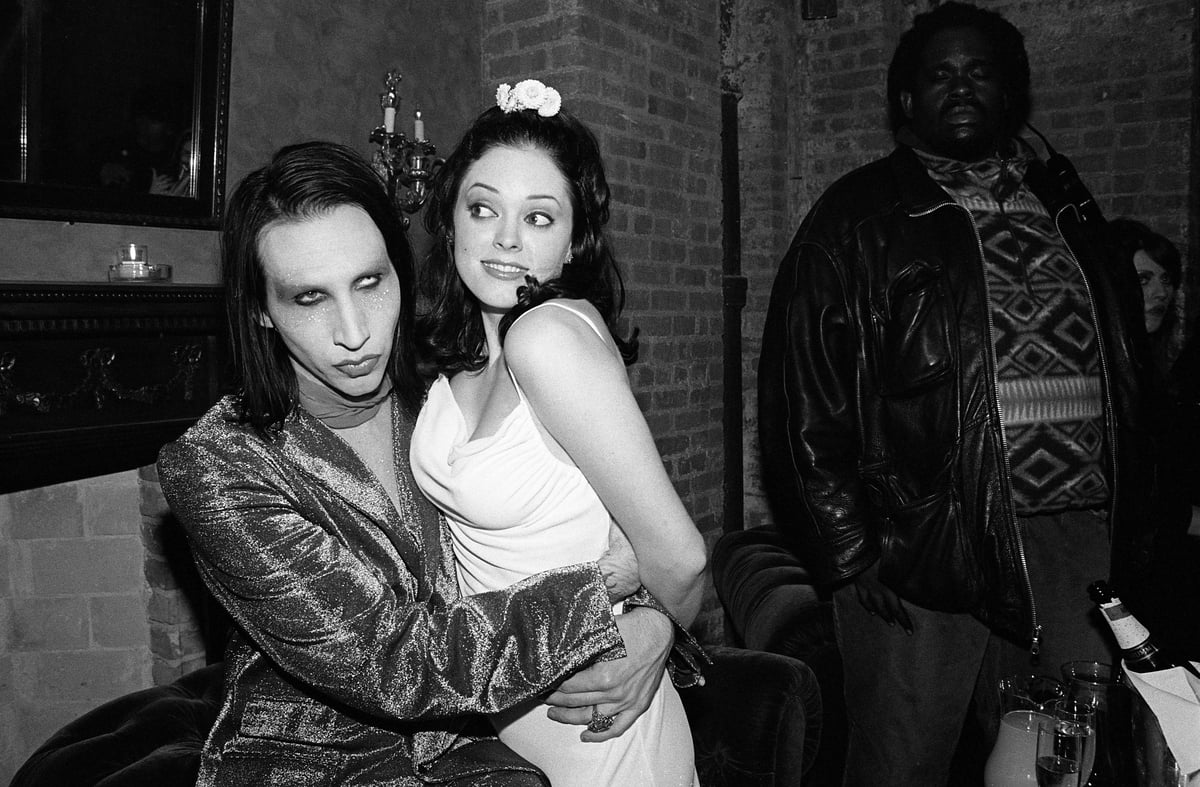 "There is great love, but our lifestyle difference is, unfortunately, even greater," she said at the time in a statement.

“Let's just say that it must have been something pretty bad for me to move out of the house after six years together and to pack up my stuff on Christmas Eve," she said. "I loved him, and this was the most painful thing I have ever had to go through.” 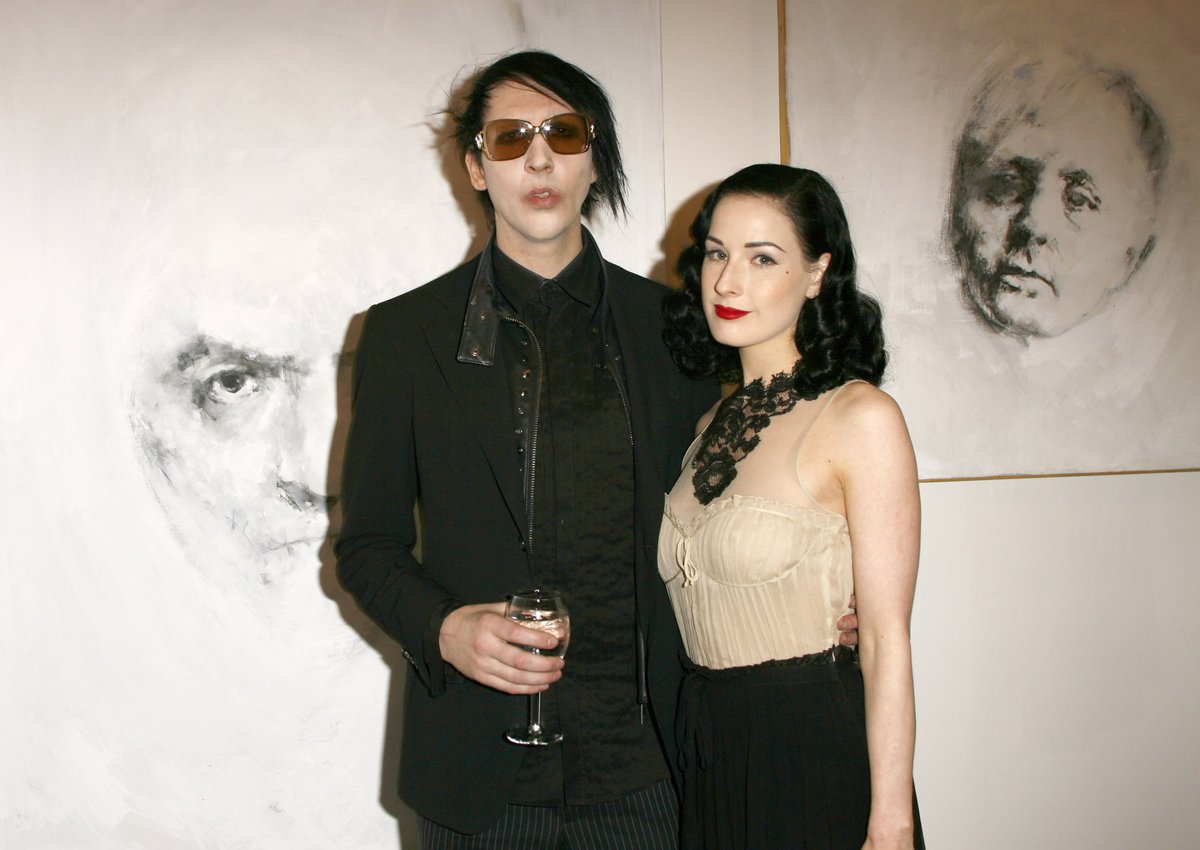 Manson met Evan Rachel Wood in 2006 and the two dated on and off for the next few years.

There’s no doubt that Manson likes to cultivate his reputation for weirdness. In an interview with NME, he said he liked to keep his house filled with “illegal and terrifying” things. He said he had skulls of “seven-year-old Chinese boys” as well as an antique abortion table “in my guest room, in the event”.

He told Rolling Stone in 2015 that he and actor Johnny Depp spent a lot of time hanging out, with Manson even living part-time in Depp’s guesthouse. They shared similar interests, both trying to buy the gun that Hitler killed himself with. They had matching tattoos.

“Johnny’s one of the only people I can talk to,” Manson said.

In the same interview, Manson claimed he had “sexual congress” an absolute minimum of five times a day, and got his then-girlfriend Usich, to back him up.

“So, I imagine you’re probably just nursing your lady parts with a bag of ice right now?” he said to her.

“Uh, yeah, I can’t even walk straight,” she replied.

Manson has also spent plenty of time with musician Courtney Love, and last month, she paid tribute to him in an Instagram post. She said when she was “at the end of my using”, two-and-a-half years ago, and was living “under a reign of suicidal terror”, it was Manson who “rescued” her.

“I will always stand by you, my sister,” Manson replied. “Love always.”

Right now, all the stories on Manson are about Wood’s allegations. Wood has also shared the testimonies of four other women who have accused Manson of abuse. McGowan has now come out in support of Wood.

"I stand with Evan Rachel Wood and the other brave women who have come forward," she wrote on Twitter.

Manson has put out a statement saying his intimate relationships have always been “entirely consensual with like-minded partners”.

However, he’s already been dropped by his record label, Loma Vista Recordings, in light of the “disturbing allegations”. Loma Vista said in a statement it will no longer promote his current album.

“Due to these concerning developments, we have also decided not to work with Marilyn Manson on any future projects.”