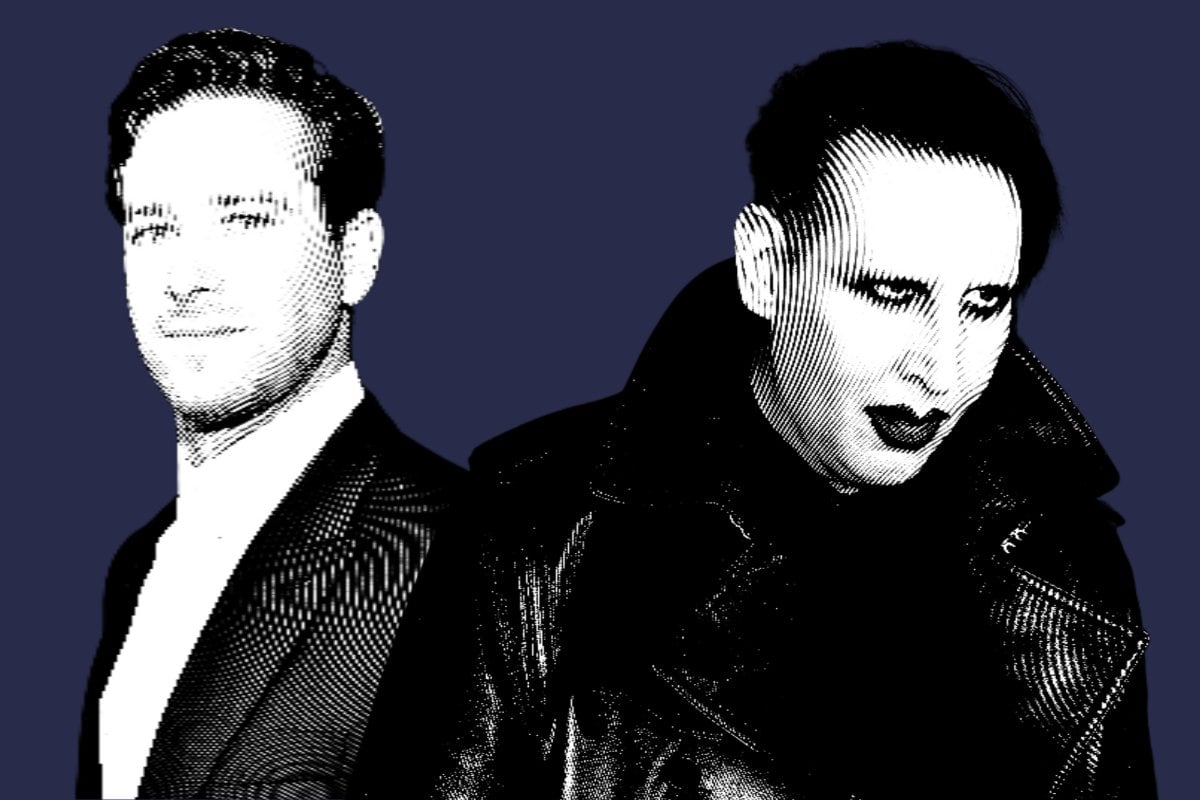 This post deals with domestic violence, sexual assault, and self harm. It may be triggering for some readers.

In the Australian Spring of 2017, many of us heard the name Harvey Weinstein for the first time.

We quickly learnt the man behind some of the biggest hits in Hollywood had been sexually abusing and harassing women for decades.

The allegations against him were not a surprise to many in the entertainment industry. In fact, jokes about Weinstein's reputation had been hiding in plain sight in sitcom scripts and late night talk show host monologues for years.

But it took until 2017, when several brave women (including actresses Ashley Judd and Rose McGowan) came forward and two female journalists broke their stories in The New York Times, for these allegations to become more than innuendo and hushed rumours. Within days of the Times story being published, the #MeToo movement had become a global phenomenon and these women's stories were making headlines all around the world. 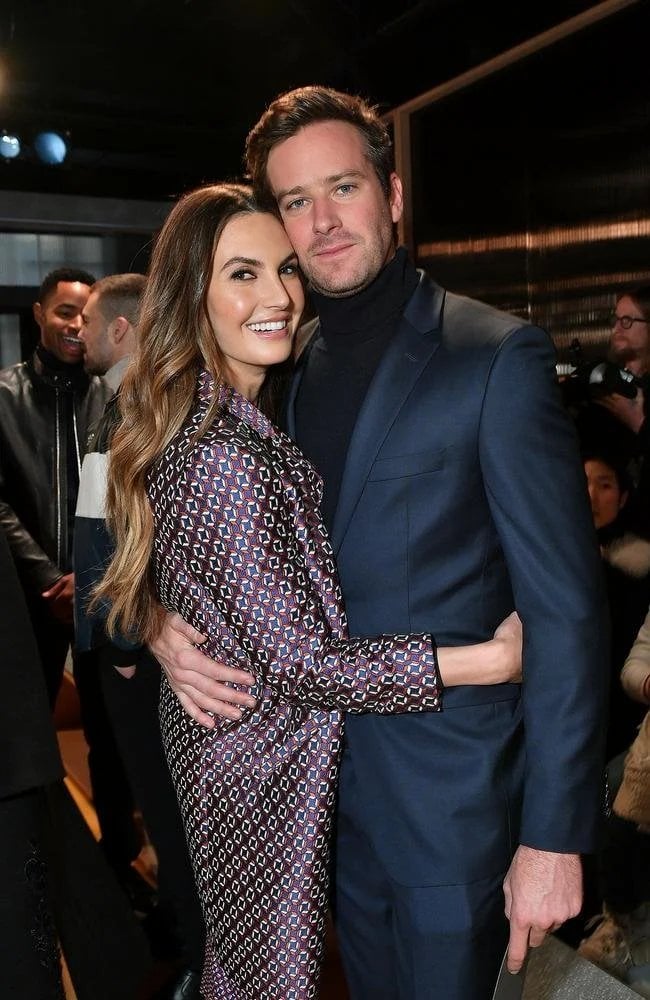 In the years since, we've witnessed a reckoning.

For the first time in history, we were openly discussing what had been happening behind closed office doors and on closed sets in Hollywood for decades. We were examining the power dynamics between influential older men and young women who were hoping to enter their industry. We were dismantling the power structures and cones of silence that had been covering up these crimes for years.

Suddenly sexual harassment and sexual abuse in the workplace was being discussed on prime time news, in opinion columns, on podcasts, and during acceptance speeches at the Oscars.

Time really was up for these men.

Now in 2021, we're witnessing a second reckoning. And this time, Hollywood relationships are the focus.

In the past couple of weeks many women have come forward to share their stories about two famous men, who they had previously been in relationships with.

House of Effie claimed that at least five women had come forward with similar stories.

In the alleged messages, which reportedly date back to 2016, 34-year-old Hammer spoke about drinking blood and described various graphic sex acts, which included sexual references to cannibalism. 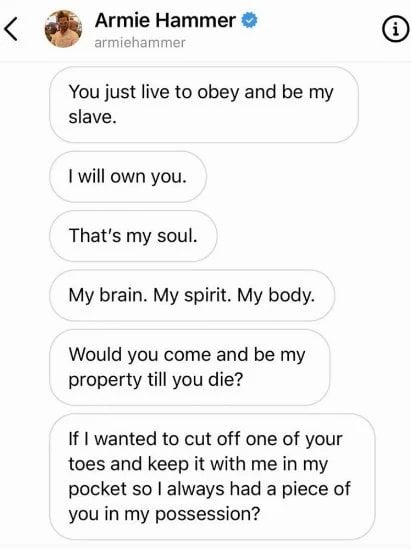 It was unclear at first if Hammer's alleged messages had been sent in the context of a consensual sexual relationship, where two adult parties were exchanging fantasies.

Jokes and memes about Hammer and the cannibal allegations soon began spreading over social media and in group chats, before more and more women came forward sharing their own stories and explaining they were allegedly groomed, coerced and abused by Hammer.

We quickly comprehended the seriousness of the allegations.

As a rapidly unfolding story, we woke up to new updates about Hammer every single day.

We soon learned that Hammer had not hidden his behaviour and had openly discussed his sexual preferences in several media appearances.

Towards the end of January, 23-year-old Paige Lorenze came forward and spoke about her relationship with Hammer.

The model and design student said during their brief relationship Hammer had carved an 'A' into her pelvis.

"He basically tied me up and he was doing knife play... Knife play made me the most uncomfortable out of everything that happened.

"He looks over me and says, 'Where am I going to put my initials on you?' He chose a spot and did it," she recounted.

Speaking to Page Six, Lorenze also said Hammer would bruise her during sex, and send photos of her naked body to people without her consent.

In an interview with KIIS FM's Kyle and Jackie O on January 28, Lorenze said she spent Thanksgiving of 2020 with Hammer and his mother. His mum, she claimed, confided in her.

"His mother was speaking to me about how she felt like, at times, he was like, stuff with the devil, she felt like he was being taken by... she was concerned about it.

"I think that his family knew that he has these sick kinds of tendencies."

Lorenze then referred to a since deleted tweet of Hammer's, a screenshot of which still exists online. 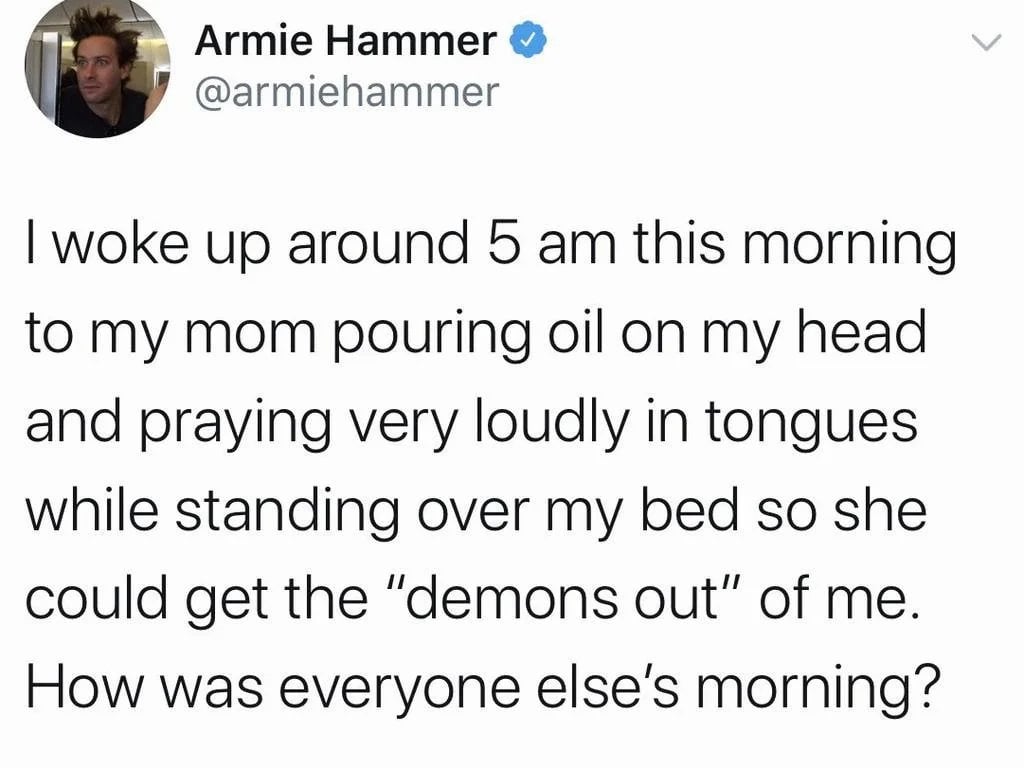 The tweet read: "I woke up around 5am this morning to my mum pouring hot oil on my head and praying very loudly in tongues while standing over my head so she could get the 'demons out' of me. How was everyone else's morning?"

Just as the news cycle was moving on from Hammer, Marilyn Manson began trending.

Earlier this week, actress Evan Rachel Wood publicly accused Marilyn Manson of being a "dangerous man" who subjected her to years of abuse.

The Westworld actor, who was 18 years old when she first met Manson, dated the industrial metal musician for several years. When their relationship began, Manson was 36 years old.

"The name of my abuser is Brian Warner, also known to the world as Marilyn Manson," Wood, now 33, shared on Instagram.

"He started grooming me when I was a teenager and horrifically abused me for years. I was brainwashed and manipulated into submission," she continued.

"I am done living in fear of retaliation, slander, or blackmail. I am here to expose this dangerous man and call out the many industries that have enabled him, before he ruins any more lives.

Afterwards, Wood shared the testimonies of at least four other women who reported allegations of rape, intimidation, drugging, violence, and psychological abuse by Manson.

As the story unfolded throughout the week, it quickly became apparent the accusations against Manson were not new. His behaviour had been hiding in plain sight for years.

Wood had previously, on many occasions, spoken about the abuse she had allegedly suffered at the hands of an anonymous ex that she had met when she was just 18.

In 2018, Wood testified before the United States House Judiciary Subcommittee on Crime, Terrorism, Homeland Security and Investigations as a domestic violence and rape survivor in support of the Sexual Assault Survivors' Bill of Rights Act.

"My experience with domestic violence was this," she said. "Toxic mental, physical, and sexual abuse, which started slowly, but escalated over time, including threats against my life, severe gaslighting and brainwashing, waking up to the man that claimed to love me raping what he believed to be my unconscious body, and the worst part, sick rituals of binding me up by my hands and feet to be mentally and physically tortured until my abuser felt I had 'proven my love for them'." 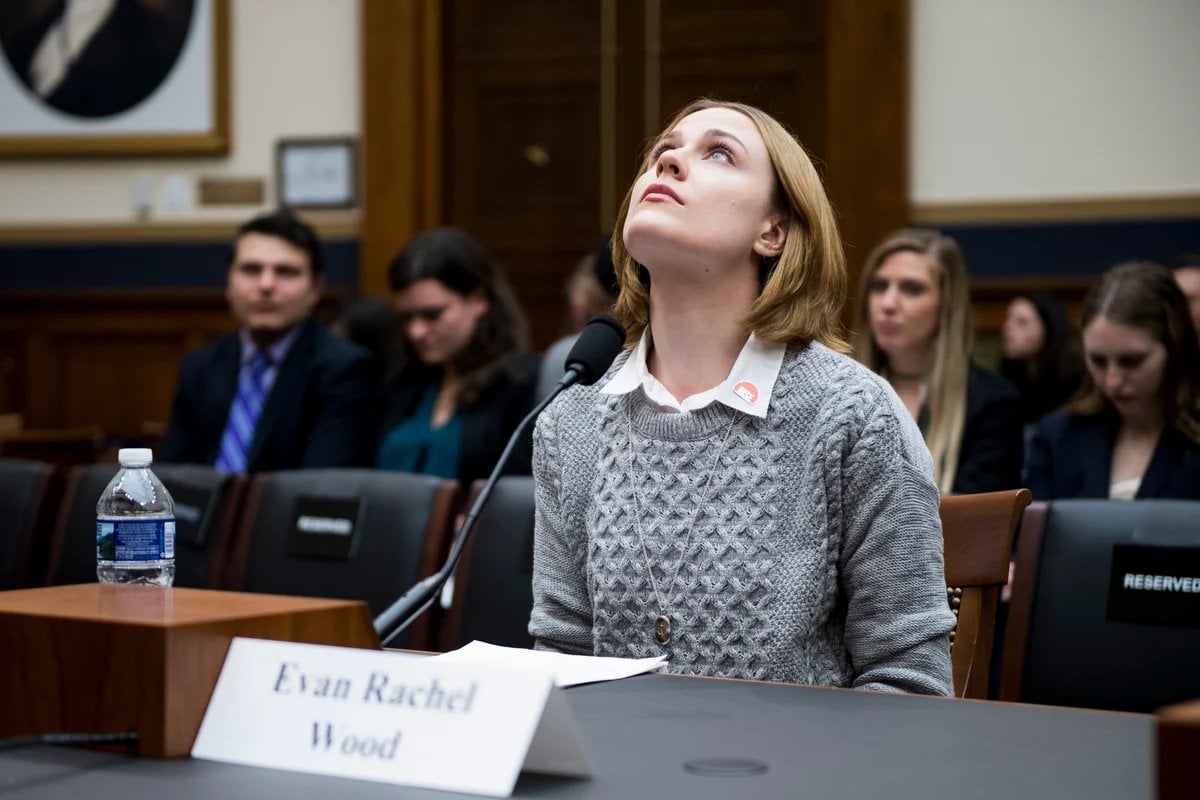 On Friday, singer Phoebe Bridgers shared on Twitter that she had visited Manson's home when she was a teenager.

"The label knew, management knew, the band knew. Distancing themselves now, pretending to be shocked and horrified is f**king pathetic."

Even Manson didn't shy away from talking about his behaviour publicly.

In an interview with Spin in 2009, Manson spoke about his split from Wood, sharing that he had called her 158 times while self-harming, before blaming her for it.

"I wanted to show her the pain she put me through. It was like, 'I want you to physically see what you've done,'" he said.

"I have fantasies every day about smashing her skull in with a sledgehammer."

In his 1999 memoir, The Long Hard Road Out Of Hell, Manson wrote about how he tricked girls into drinking tequila disguised as beer until they passed out, and made rape threats during anonymous phone calls.

Both the Hammer and Manson stories will continue to unfold and it's likely more women will come forward with similar stories now they feel it's safe to do so.

LISTEN: Marilyn Manson and the boy who slept through COVID-19. Post continues below.

These stories shouldn't have come as a shock to us. They've been hiding in plain sight for years, even decades, waiting for the right time and the right amount of momentum to make headlines.

The stories will sound familiar to us. Maybe we will have heard the victim tell her story in the past and didn't take it seriously enough, maybe we heard the abuser speak about it and brushed it off as "weird" or "art". One thing is for sure — we're taking it seriously now.

In 2021, we're about to witness a reckoning that will allow victims to finally tell their stories and force abusers to stop hiding in plain sight.

A reckoning that will redefine the abusive Hollywood relationships we've turned a blind eye to for far too long.

Reply
Upvote
1 upvotes
I'll believe it when I see it. People love to talk about this stuff when the news first breaks but unless it results in actual criminal prosecution (like Harvey Weinstein and Bill Cosby), the men can often just go on with their careers as normal after laying low for a while. If only "time really was up" for all of these men. It's too early to say what will happen with Armie Hammer or Marilyn Manson.

Reply
Upvote
1 upvotes
@fightofyourlife Kevin Spacey went down, he’s tried to revive his career lately but cinemas just refused to show his film. I think it’s probably all over for Armie Hammer, his career was still too new to survive this.
I think there are a group of fans who will stick with Manson like the MJ die hards who refuse to believe he was an abuser. But it sounds like there is enough evidence for criminal charges if they aren’t outside the statute of limitations.

Reply
Upvote
1 upvotes
@fightofyourlife This would be true for more powerful Hollywood A-listers, but Marilyn Manson's career was basically over already, long before this. His label has now dropped him and what few remaining friends he has seem to be distancing themselves from him. I'd say he's pretty much done for. As for Armie Hammer, I'd never even heard of him two weeks ago. Is he really that big a deal in Hollywood that he can be protected from a scandal like this? I doubt it. I really can't see either of them having much of a career after this.
Now if only the same could be said for the likes of Woody Allen....
News
General
Opinion
True Crime
Politics
Sport
Explainer
Entertainment
Celebrity
Reality TV
Movies
TV
Books
Rogue
Royal
Lifestyle
Beauty
Fashion
Weddings
Home
Wellness
Health
Fitness
Travel
Food
Parents
Before The Bump
Pregnancy
Baby
Kids
Teens
School
Parent Opinion
Work & Money
Money
Finance
Career
Lady Startup
Relationships
Sex
Dating
Separation
Friendship
Family
Real Life
Couples