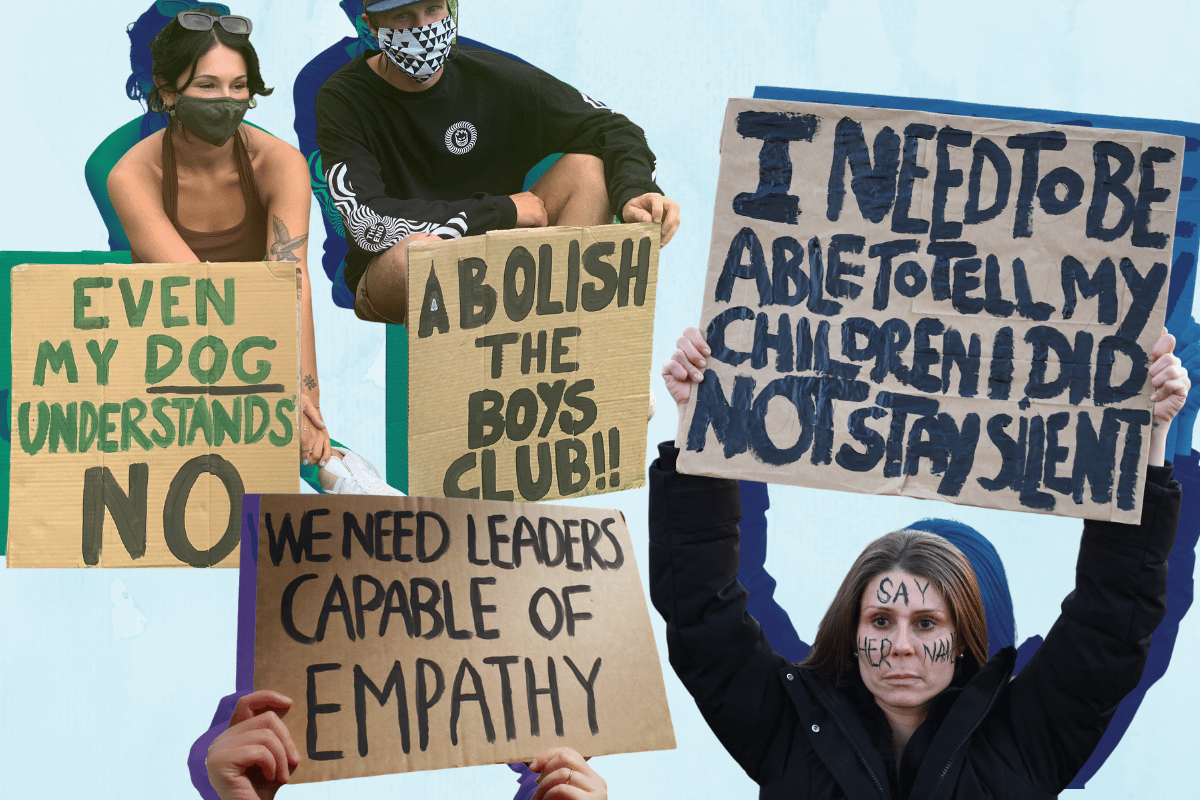 After weeks of watching sexual assault allegations come out of the nation's Parliament, thousands of women have taken to the streets with one clear message: "Enough is enough!"

On Monday 15 March, 100,000 women were expected to have attended more than 40 March 4 Justice rallies across the country to protest against sexism and gendered violence.

In Canberra, women gathered with placards outside Parliament House, where a petition will be presented to the government calling for "full independent investigations into all cases of gendered violence" and the standing down of "perpetrators" from positions in policy and law making, among other demands.

Former Liberal Party staffer Brittany Higgins, who alleged she was raped by a male colleague, also addressed crowds at Canberra, while Australian of the Year and sexual assault survivor Grace Tame delivered a speech down in Hobart.

Brittany Higgins says she came forward with her story to 'protect other women' in a speech to March4Life protesters in front of Parliament House. pic.twitter.com/e2u5uYNtYS

"We have already come to the front door, now it's up to the Government to cross the threshold and come to us. We will not be meeting behind closed doors," she wrote in a tweet.

Across the world, women are just as angry.

In London, hundreds of people gathered at a vigil for Sarah Everard and protested violence against women on Saturday, after Metropolitan Police officer Wayne Couzens was charged with her kidnap and murder. The 33-year-old vanished on March 3 while walking home in London.

The event ended with clashes between police and those attending.

As women all over the world call for an end for gendered violence, we decided to round up the most powerful photos from all the protests.

Here are 22 of the best signs that sum up exactly how women are feeling right now.

Women are STILL doing the work, and I am - we are all - extremely over it#march4justice #canberra pic.twitter.com/hZboUJdUSl

Listen: The women of Australia are angry. Post continues below.

It's been an emotional day at #March4JusticePerth. A little teary meeting another mum with the same message. Best vibes to everyone in all other states tomorrow. ✌#March4Justice #EnoughIsEnough pic.twitter.com/BEDg7SRUtM

Found the perfect sign! The only addition I’d have is “You know it’s REALLY bad when an OLD white man is here!”#MarchForJustice #IStandWithLouiseMilligan #auspol #ScottytheCoward pic.twitter.com/2nHtnn4vUs

♀️🎗️🌳
Men need to make better brothers, sons and fathers out of each other.

I'm so sorry that women feel in danger because of men.

My male friends and I are part of the conversation and we hope to be part of the solution.#EnoughisEnougth#ReclaimTheStreets pic.twitter.com/Upru54EKYQ

Because it will be bedtime for some, they have already done their #ReclaimTheStreets protest , raising their voices for their right to be safe wherever they might be. pic.twitter.com/adiLLoDiuc 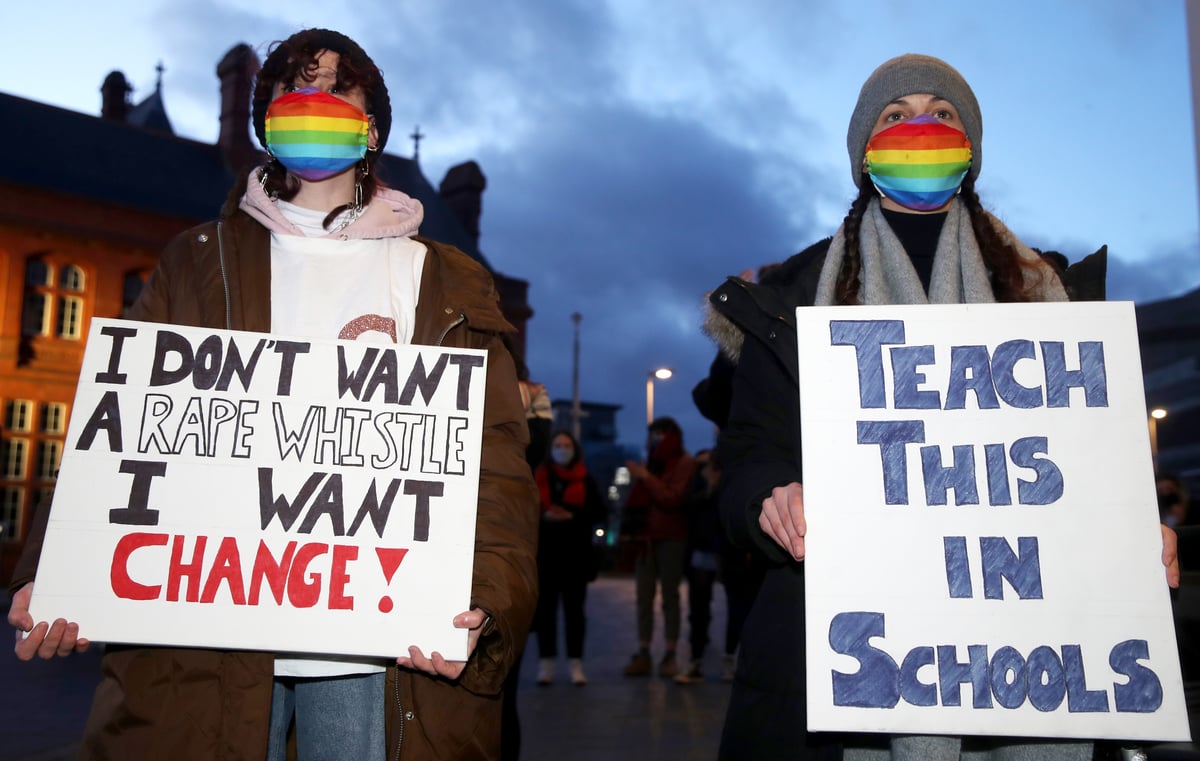 Women hold up placards outside the Senedd in Cardiff on March 13. Image: Getty. 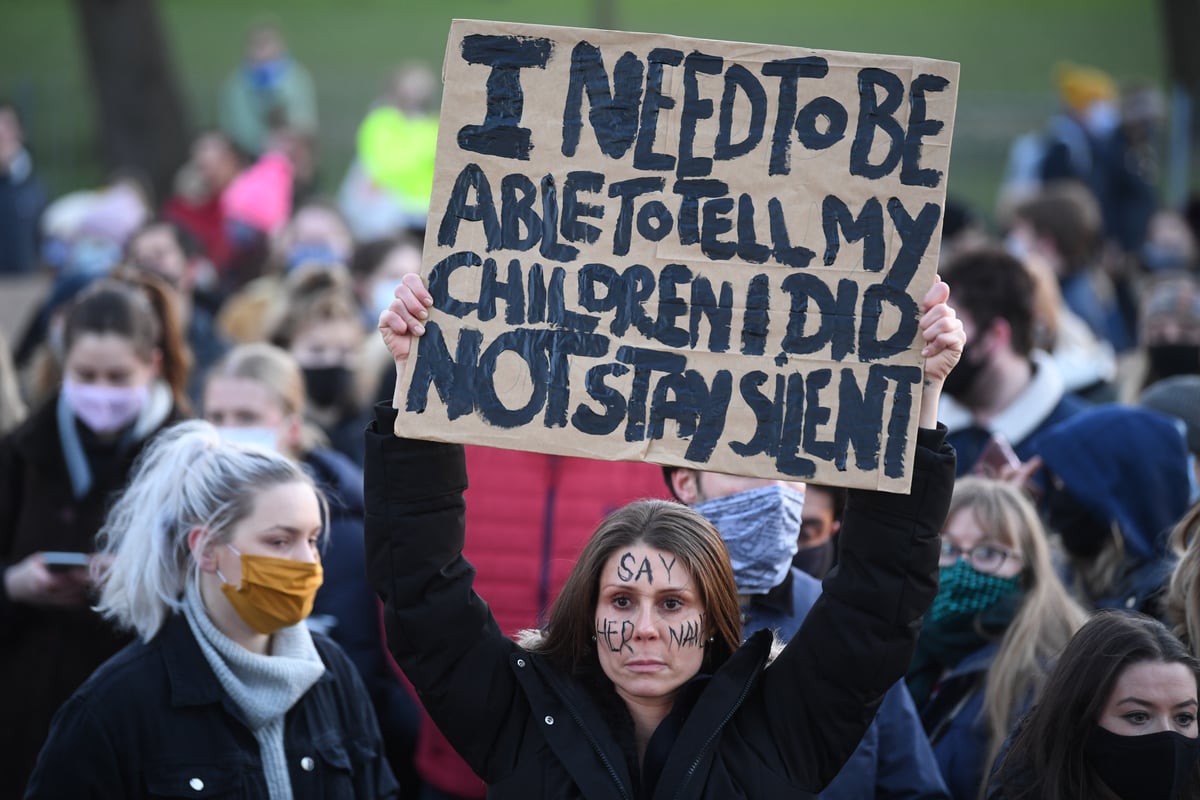 A woman holds up a placard as people gather at the band stand in Clapham Common, London on March 13. Image: Getty.

Did you attend one of the March 4 Justice rallies? Let us know in the comments below.

S
snorks a year ago
Reply
Upvote
4 upvotes
@james b I certainly haven't been overwhelmed by their response to the recent allegations.
R
rush a year ago
Reply
Upvote
3 upvotes
@james b what women want is for sexual assault to be punished as it should be. Have a look at the history of the vile person who killed Jill Meagher. He had a number of rapes and violent assaults in his past, most if which resulted in pathetic, paltry sentences, he should never have been out on the streets in the first place. We want more funding for services to help people escape domestic violence. We want workplaces - Parliament House included - to treat sexual harassment claims seriously, and for people to not fear they will lose their jobs if they speak up. We want funding for mental health issues, drug and alcohol abuse problems (which often go hand in hand with mental health issues),  we need to fund programs that treat the abusers too, anger management treatment and so on. There are so many things that can be done, rather than telling women we should just count ourselves lucky we don't get shot in the streets for protesting.
L
laura__palmer a year ago
Reply
Upvote
11 upvotes
@james b Come off it. If that is what you think the problem is, you are sadly naive. But I think that this is a case of being deliberately obtuse. It's about making it easier for women to come forward and you know it. I am fed up to the back teeth with men like you, who build strawmen and who downplay the issues when it comes to sexual violence against women. You are not an ally and I am suspicious of your motivations for posting on this website. Why are you here, commenting on women's issues?
L
laura__palmer a year ago
Reply
Upvote
@rush Exactly all of this.
News
General
Opinion
True Crime
Politics
Sport
Explainer
Entertainment
Celebrity
Reality TV
Movies
TV
Books
Rogue
Royal
Lifestyle
Beauty
Fashion
Weddings
Home
Wellness
Health
Fitness
Travel
Food
Parents
Before The Bump
Pregnancy
Baby
Kids
Teens
School
Parent Opinion
Work & Money
Money
Finance
Career
Lady Startup
Relationships
Sex
Dating
Separation
Friendship
Family
Real Life
Couples