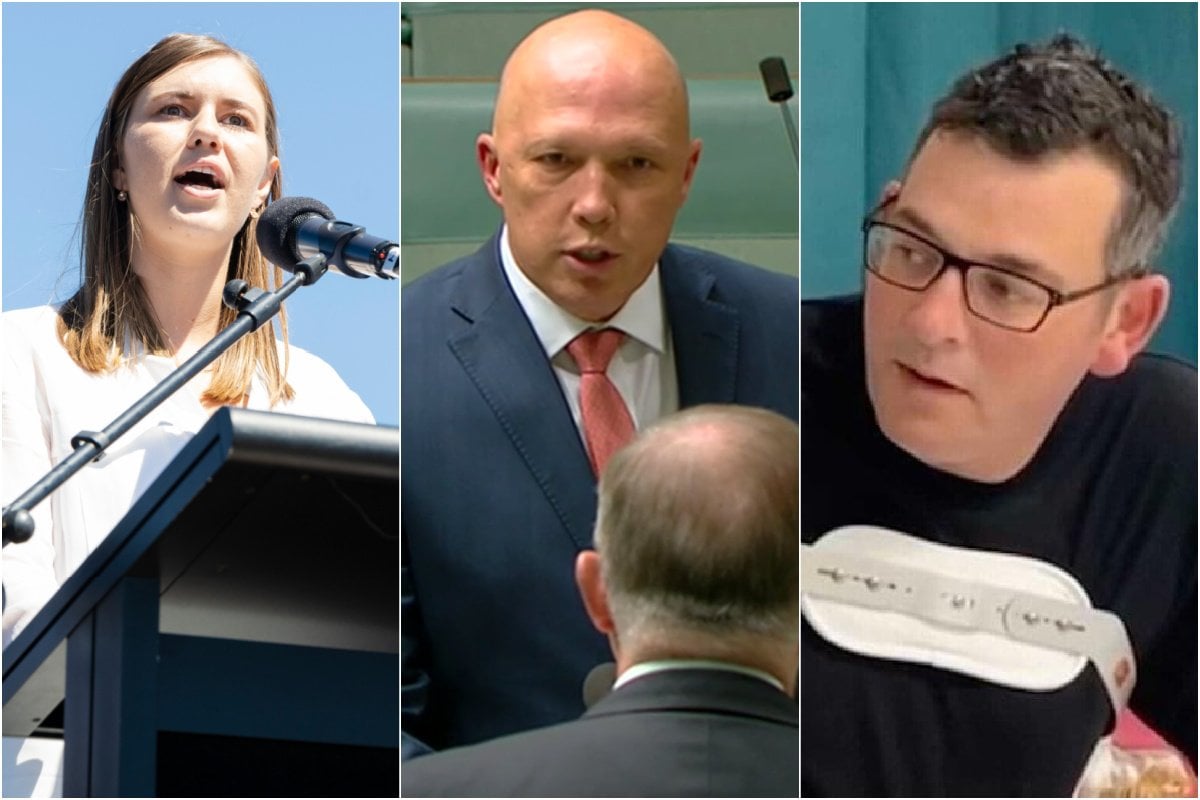 Scott Morrison and the senior leaders of parliament refused to attend Monday's March 4 Justice rally as 100,000 women marched around the country for equality, justice, respect and fairness in light of the recent sexual assault allegations engulfing Parliament House.

So Labor Leader Anthony Albanese tried to instead take Brittany Higgins' speech inside so the alleged sexual assault survivor's words could be heard by the lawmakers of this country.

But Home Affairs Minister Peter Dutton walked up to the podium to cut off Albanese as he spoke about the former Liberal staffer, asking the speaker that Albanese "no longer be heard." Minutes earlier, several Liberal party figures could be seen leaving the chamber as Albanese repeated the protest's demands to the room.

Scott Morrison shuts down #qt on #March4Justice day & flees the chamber as OL Anthony Albanese rises on a suspension of standing orders. Peter Dutton later gags the OL as he updates the house on Brittany Higgins' extraordinary speech in front of APH earlier today. #auspol pic.twitter.com/KzbSupvZno

Scott Morrison is also under fire for his actions on Monday.

In his opening remarks in Question Time, Mr Morrison said it was "right and good" that people were able to congregate in peaceful protests as tens of thousands gathered to demand action against gendered violence in Australia.

"Not far from here, such marches, even now, are being met with bullets, but not here in this country, Mr Speaker," he said, referring to Myanmar's violent protests.

His "tone-deaf" commentary has been widely condemned.

Prime Minister @ScottMorrisonMP on the #WomensMarch4Justice which he chose not to attend. "This is a vibrant liberal democracy, Mr Speaker, not far from here, such marches, even now, are being met with bullets, but not here in this country." Um...🤔🤔🤔 #auspol @sbsnews pic.twitter.com/C3bNaIRvhH

There were 40 rallies yesterday around Australia, with crowds chanting "enough is enough" while carrying signs that read "we are marching for everyone's daughter," and "stop violence against women."

Former Liberal staffer Brittany Higgins had a hand in kick-starting the movement, telling the crowd in Canberra, "For so long it felt like the people around me only cared because of where it happened and what it might mean for them.

"It was so confusing because these people were my idols. I had dedicated my life to them. They were my social network, my colleagues and my family.

"And suddenly they treated me differently. I wasn't a person who had just gone through a life-changing traumatic event, I was a political problem."

Australia's minister for women has defended her no-show on Monday.

Marise Payne declined to attend Canberra's March4Justice rally outside Parliament House on Monday, but had offered to meet a delegation of protesters in private. That offer was refused.

Senator Payne said the "optics" of potentially being booed by the crowd played no part in her decision and the offer for a meeting still stands.

"Throughout the year we meet hundreds and hundreds of people," she told the ABC's 730 program on Monday night.

"But we are very, very willing to engage on the issues."

.@leighsales asks the Minister for Women @MarisePayne why she didn't attend the march outside Parliament House today. #abc730 pic.twitter.com/VwH7tApIPW

Attorney-General Christian Porter has launched defamation action against the ABC, seeking aggravated damages over an article about a historical rape allegation.

Mr Porter has lodged a statement of claim in the Federal Court in Sydney regarding an article published on February 26.

Mr Porter's lawyers allege the story - which did not name him - was defamatory.

"And (he) has suffered substantial hurt, distress and embarrassment and has and will continue to suffer loss and damage."

Mr Porter is seeking aggravated damages, costs and removal of the article and related material on the web.

Victorian Liberal powerbrokers have been running the numbers as Opposition Leader Michael O'Brien attempts to fend off an imminent leadership challenge.

Brad Battin - opposition spokesman for road safety, crime prevention, victims support and youth justice - is expected to make a tilt for the top job during a Liberal party room meeting before parliament sits on Tuesday morning.

The party's 31 state MPs will first need to vote to bring on a spill motion and declare the leadership vacant. They will then vote on who they prefer as leader.

The move follows months of speculation about the performance of Mr O'Brien as opposition leader.

He has faced criticism for failing to land any blows on Premier Daniel Andrews and his government amid the coronavirus pandemic, particularly on the bungled hotel quarantine program that led to the state's second wave.

No need for virus overreaction: NSW.

Gladys Berejiklian has urged other premiers not to introduce border restrictions for NSW in response to the latest community transmission of COVID-19, saying it would be an "overreaction".

The plea comes after genomic testing showed a security guard who worked at the Sofitel hotel in Sydney on March 6 had the same highly-contagious UK strain of the virus as a returned traveller at the hotel.

The guard - who has already received his first dose of the Pfizer vaccine - had no symptoms and had followed the required protocols, Dr Chant said.

She said there was "not a clear and obvious breach" that explained the infection.

"We haven't been able to find an exact source, an explanation for how this person became infected," Dr Chant told reporters on Monday.

"We are testing everyone who worked, co-workers who worked with this gentleman to just check there is not someone else who may have been an intermediary that transmitted to this gentleman."

She urged state governments across Australia to "give us a chance to demonstrate our capacity to get on top of this" and show how the vaccine rollout is working.

Victorian Premier Daniel Andrews says he is lucky not to have suffered permanent damage to his spinal cord in a fall that will keep him off work for at least another six weeks.

The 48-year-old was discharged from hospital on Monday, six days after slipping on wet stairs at a holiday home on the Mornington Peninsula.

"As you know, at around 6:30am last Tuesday, I fell heavily on wooden steps at the front of a rental beach house that our family had been staying at for the long weekend," Mr Andrews said in a statement on Monday.

Good to get out of ICU and settled in new digs.

Thanks for all your messages and well wishes. It really means a lot. pic.twitter.com/ujdm3WJ3a9

"I landed flat on my back and hit the steps hard directly below the shoulder blades fracturing at least five ribs and sustaining an acute compression fracture of the T7 vertebra.

"I narrowly avoided permanent damage to my spinal cord."

Mr Andrews said his injuries were serious and would require him to wear a brace throughout the day, except while sleeping.

"My doctors also want me to get rest and undertake a comprehensive program of physiotherapy," he said, confirming he would take a leave of absence for six weeks.

Prime Minister Jacinda Ardern says Australia's push to open borders with Singapore could threaten the goal of a trans-Tasman bubble with her country.

Australia and New Zealand have a long-standing agreement to remove quarantine obligations on travellers dating back to May last year.

Eastern Australian states have fulfilled their side of the deal, allowing Kiwis to bypass the otherwise mandatory fortnight of isolation.

New Zealand is yet to do so, with Ms Ardern holding back out of an abundance of caution, following her country's health-first approach to fighting COVID-19.

On Sunday, Deputy PM Michael McCormack told the ABC of its goal to open to Singapore "potentially for a bubble in July".

Ms Ardern responded that, "If Australia makes the decision to open up, and we think that that poses risks to us then we will reconsider," she said.

The killing of a London woman earlier this month and the policing of a vigil to remember her continues to shake the British establishment as more details emerge about what happened at the weekend ceremony.

London police chief Cressida Dick was due to meet Prime Minister Boris Johnson and MPs on Monday to discuss ways to protect women from violence following the murder of Sarah Everard, who first went missing while walking home on March 3.

Everard's fate became all the more shocking after a London police officer was charged with her kidnapping and murder on Friday.

A woman who attended the Saturday vigil and was pinned to the ground by police officers - seen in an image that went viral online - said on Monday that she was only there to light a candle.

Speaking about the incident on UK television, Patsy Stevenson said she did not understand why she was "pushed to the ground so forcefully" and was "terrified" by her ordeal.

"It happened very quickly and I was only there to lay a candle down, I did not expect that to happen," she said.

"All we wanted to do was pay our respect."

Patsy Stevenson, who was arrested at Sarah Everard's vigil, says "no one intended" to politicise her death, adding she's been "thrown into the public eye" when the main issue concerns the "safety of women".https://t.co/6xvrsxAN1l pic.twitter.com/XeZzEJ0Bbq

Germany, France and Italy say they will stop administering the AstraZeneca COVID-19 vaccine after several countries reported possible serious side-effects despite an appeal by the World Health Organisation not to suspend inoculations.

Iceland and Bulgaria followed suit and Ireland and the Netherlands announced suspensions on Sunday.

The moves by some of Europe's largest and most populous countries will deepen concerns about the slow roll-out of vaccines in the region, which has been plagued by shortages due to problems producing vaccines including AstraZeneca.

France said it was suspending the vaccine's use pending an assessment by the EU medicine regulator due on Tuesday.

Italy said its halt was a "precautionary and temporary measure" pending the regulator's ruling.

The United Kingdom said it had no concerns while Poland said it thought the benefits outweighed any risks.

- Doug Parkinson, a national musical fixture for more than five decades once billed as "Australia's greatest soul voice", has died.

- A lockdown has been in effect from Monday for more than 40 million people in Italy because of a resurgence in the coronavirus.

- Beyonce set a record for the most Grammy Awards by a female singer with 28.

kelly a month ago

Reply
Upvote
1 upvotes
I really do not recall a PM so sadly lacking in the art of articulating the English language. Morrison takes the cake, he really is not a bright man.  It beggars belief that comment re bullets, I’m not so sure he wasn’t being smart and that is what he would have liked to do or have done. Afterall, they are getting in his way and he gets angry if anyone obstructs him. I really don’t trust that man.
gypsy a month ago

Reply
Upvote
@gypsy Yes some recommendation for that. Big goofy fool.
gypsy a month ago