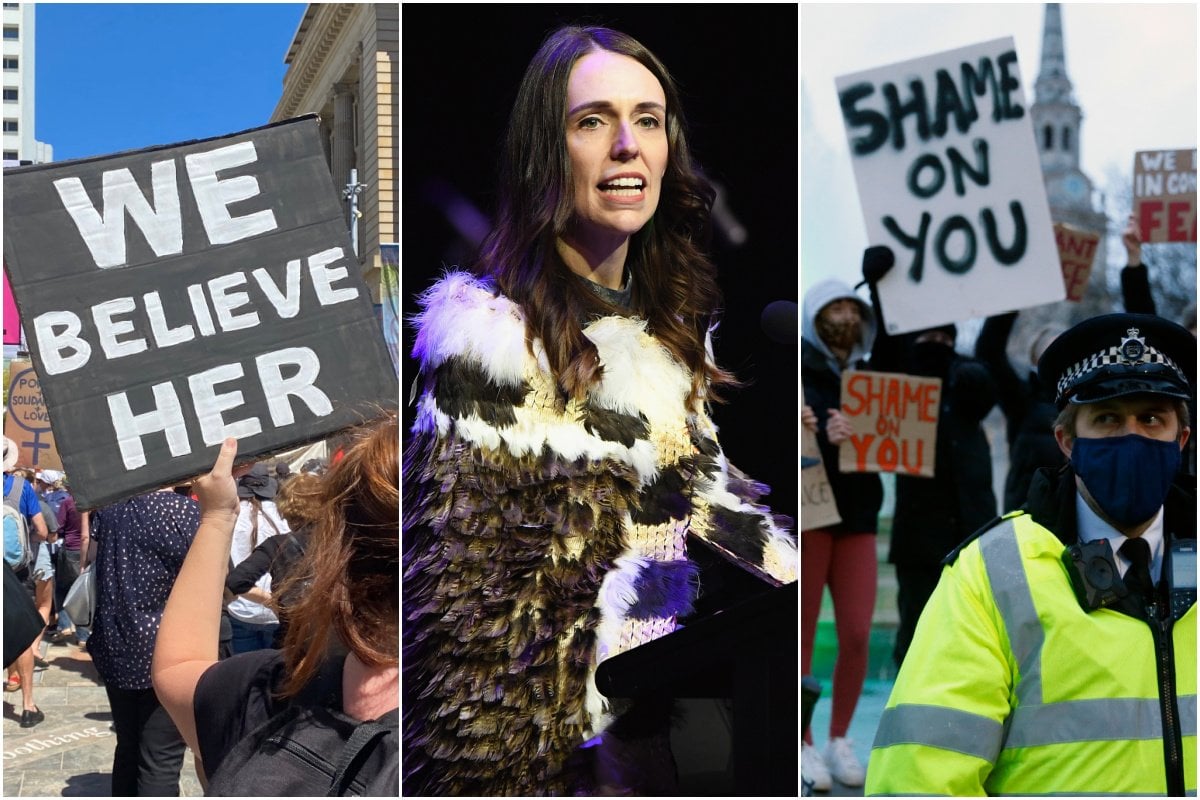 "We will not meet behind closed doors." PM says no to women's rally, but offers meeting.

Scott Morrison has offered to meet with a delegation representing protesters expected to rally outside Parliament House on Monday seeking justice for women.

The March for Justice comes as the Morrison government is under a cloud after an alleged sexual assault of a former Liberal staffer, and a historic rape case allegedly involving a minister who strenuously denies it.

"Enough is enough. This is a national reckoning," Fair Agenda executive director Renee Carr said in a statement.

Found the wonderful @julia_zemiro who will MC @march4justiceau here in Canberra tomorrow. She’s a deadset legend who literally responded in seconds when I asked her to support the #March4Justice as did @SaxonAdair @Lisa_Wilkinson @ContehBiger & more. pic.twitter.com/x1WGea2QNK

"Women and girls around the country are completely grief-stricken by the federal government's failure to respond to this crisis, and intervene in the systems that enable gendered violence across our communities."

The prime minister's office has invited up to four delegates to meet with him and Minister for Women, Marise Payne. However, it is the second-best option for protesters, who want Mr Morrison to attend the rally in person.

This morning, organiser Janine Hendry declined the meeting in an explosive Twitter update, saying "We have already come to the front door, now it's up to the Government to cross the threshold and come to us. We will not be meeting behind closed doors."

An estimated 100,000 people are expected to attend more than 40 marches around the country, which coincides with the first day of a fortnight of parliamentary sittings in Canberra.

There have already been marches held around the country over the weekend.

London's Metropolitan Police is under heavy pressure to explain its actions during a vigil for a woman whom one of the force's own officers is accused of murdering.

Hundreds on Saturday defied coronavirus restrictions to gather and protest violence against women, but the event ended with clashes between police and those attending.

Home Secretary Priti Patel said scenes from Saturday's vigil in south London were "upsetting" and she is seeking a full report on what happened from the Metropolitan Police.

This is what the Sarah Everard vigil looked like before tens of Met Police moved in, disrupted the mourners and proceeded to arrest women off the bandstand. Shameful pic.twitter.com/RcsIF76Nwj

The capital's mayor, Sadiq Khan, said the police response was "at times neither appropriate nor proportionate".

Police were seen scuffling with some women at the event, and one woman was seen pinned to the ground by two officers. Several women were led away in handcuffs as other attendees chanted "Shame on you" at police.

Many of those attending the vigil were already hostile to police because a serving Metropolitan Police officer, Wayne Couzens, was charged with the kidnap and murder of Sarah Everard, a 33-year-old woman who vanished on March 3 while walking home in London.

Monday - International women’s day
Tuesday - A woman admitted she was close to suicide
Wednesday - She is accused of lying before presenter walks off show
Thursday - Woman's body was found.
Friday - Confirmed the murdered woman is Sarah Everard.
Saturday - vigil results in ths: pic.twitter.com/u0xO5gwo9m

NSW health authorities are scrambling to confirm the source of a new COVID-19 infection in a vaccinated Sydney hotel quarantine worker.

The 47-year-old man worked at both the Sofitel Wentworth and Mantra at Haymarket hotels in inner Sydney and had already received his first Pfizer jab.

The source of the security guard's infection remains unclear, with all four of his family contacts testing negative so far.

NSW Chief Health Officer Kerry Chant said a "working hypothesis" was the man picked up the virus from an infected traveller while working at the Sofitel overnight on March 6.

"The genomics is being done urgently and we are expecting that ... very late into the evening or early tomorrow morning," she told reporters on Sunday.

A number of venues across the city have been listed as potential exposure sites and 130 close contacts have been asked to self-isolate after working an overnight shift with the man at the Mantra Hotel on Friday.

Queensland health authorities are investigating whether a COVID-19 infected traveller in hotel quarantine has links to an infected Brisbane hospital doctor.

The traveller was staying at the Hotel Grand Chancellor on the same floor at the same time as another infected traveller who's now at the Princess Alexandra Hospital.

That patient had contact with a doctor who later became infected with coronavirus, forcing the hospital into lockdown.

"Case one is the person brought into the hospital on the 9th of March, case two was the doctor who got it off the person who came in on the 9th," Health Minister Yvette D'Ath told reporters.

"Case three is a person in hotel quarantine on the same floor as case one.

Ms D'Ath said officials were assessing CCTV footage to try to identify "why this transmission might have occurred".

Queensland's latest COVID-19 case has sparked warnings in four other jurisdictions across the country.https://t.co/1nZDUh5RfH

Meanwhile, 238 people linked to the infected doctor have been traced, with virus test results due back in the coming days, Deputy Chief Health Officer Sonya Bennett said.

Three close contacts of the female doctor have all tested negative.

Australians are free to travel across all interstate borders without undergoing quarantine for the first time since the coronavirus arrived.

It is the first time WA has had no quarantine requirements for any state or territory since border restrictions were introduced last April.

But a re-elected Premier Mark McGowan has warned he won't hesitate to bring back a hard border if needed to keep the virus out of WA.

The premier was speaking after leading Labor to a landslide election victory which highlighted the popularity of his tough response to the pandemic.

The 51 murdered worshippers in the Christchurch Mosques terror attack have been remembered at a national remembrance service, two years since the 2019 shootings.

The lost were remembered in song, in prayer, in tears and with defiant pledges to rebuild lives, bodies and community.

The centrepiece of the service was the names of the dead read aloud as their pictures were displayed on a big screen alongside descriptions provided by their families.

The 51 people murdered in the Christchurch Mosques terror attack have been remembered at a national remembrance service, two years since the 2019 shootings. https://t.co/p95fMQiqDO

Ms Ardern spoke last, clad not in a hijab as she did in the days following the attack to show her support, but a korowai, a Maori cloak symbolic of leadership.

She pledged to continue to fight racism.

"In the aftermath of the terror attack I heard the stories of women who were frequently harassed because they were easily identifiable," she said.

"Of children whose earliest experiences of racism are in the school grounds.

"We have to ask ourselves, what does it take a create a generation that is emphatic but strong?"

- Taylor Swift and Beyonce are expected to lead the charge at the 63rd Grammy Awards which will air in Australia on Channel 10 from 11am AEDT.

- More than 14 people have been killed and factories have gone up in flames in Myanmar in one of the bloodiest days of protests against last month's military coup.

Reply
Upvote
3 upvotes
BUT as a father of daughters surely he should have joined in the march, with bells on. Surely Jenny advised him of that. She is slipping in her Prime Ministership duties. Come on Jenny. fire the old man up, where is he without you?
T
thunder 10 months ago

Reply
Upvote
5 upvotes
Why is anyone surprised that is SOOOOO Morrison. Secretive, non answerable for anything, never an explanation he just runs and hides. When are people going to see him for what he is. A control freak.
C
cat 10 months ago