On 19 May 2017, Figen Murray hung a star-spangled banner in her lounge room and threw a family party in honour of her son, Martyn.

In just under a week, the 29-year-old was due to fly solo to America for what he hoped would be the trip of a lifetime. He’d been saving up his wages from his PR job for two years to fund the adventure and planned to travel all over the United States, from San Francisco to New York City.

“Martyn was a bit of a diva and he had lots of friends,” Figen told Mamamia. “So in true diva style he actually had four leaving parties – two with his mates, one with his colleagues and then the final one with us.”

That night, the family had takeaway and a few drinks.

“The family home had just been sold so Martyn spent some time reminiscing in his childhood bedroom and then suggested we get a photo, all of us standing in front of the house,” Figen said.

It is the last photo Figen has with her son. Because tragically, Martyn would never board the plane, never stroll through Central Park or lie on a Floridian beach like he'd dreamed of.

Three days later - on 22 May 2017 - Martyn was one of 22 people killed by suicide bomber Salmen Abedi at an Ariana Grande concert held at the Manchester Arena.

"On the night of the attack, my daughter Louise woke me up at 11pm and said she'd seen on Twitter there had been a bomb at the Manchester Arena," Figen said.

Nobody could find Martyn.

Figen hadn't even known he was attending the concert, but as she watched the news she could feel a mounting sense of dread.

"Suddenly I looked at Louise and I simply said 'he's dead'," Figen recalled. "I know it sounds strange - but I just couldn't feel him anymore. Couldn't sense his energy. I knew he was gone. I wasn't 99 per cent sure, I was 100 per cent sure."

In the early hours of the morning, Figen travelled to the Etihad stadium with her partner Stuart - police had told families of the missing to wait there for more information.

"One by one, other family members and Martyn's friends arrived, and by that evening there was a group of 30 of us waiting for news," she said.

Hours later, a female police officer called them into a private room.

"She was crying as she told us Martyn didn't make it," Figen said. "My husband ended up comforting her."

The days that followed, needless to say, were a complete blur for Figen. She was surprised when one of Martyn's friends told her Martyn had known what he wanted his funeral to be like and had made a list on his laptop.

Sure enough, the document was there.

"Martyn had been convinced he wouldn't see his 30th birthday and he was right," Figen said.

Figen doesn't know why Martyn had a feeling his life would be short - but he'd written detailed instructions. He wanted a carriage with two white horses to carry his body, he wanted to be cremated rather than buried, and he wanted everyone to wear black "with something fabulous".

"Martyn had a set of pyjamas he kept at my house for when he slept over - a Mariah Carey T-shirt and comfy bottoms," Figen said. "I held them to my face and I started to cry because they smelled of him.

"I wanted so badly to keep them but as a last act of motherly love, I washed them so we could put him to rest in them."

Now, two years on, life for Figen has changed beyond all recognition.

"My job as a therapist died alongside him that day. I did it for 20 years and would not be able to ever offer any psychological support to anyone again.

"It's hard to take anyone else’s issues seriously since Martyn was blown up by a bomb, to put it very bluntly.

"I am so, so broken and damaged inside. I feel like I'm two halves of one person and I don't know how to reconcile being a therapist with being a grieving mum."

Martyn was someone who lived his life in all the colours of the rainbow. He loved Mariah Carey and the Spice Girls. He was obsessed with Manchester-based soap opera Coronation Street, and even had one of the characters tattooed on his leg. Many actors from the soap came to his funeral to pay their respects.

In 2016, a story about Martyn and Figen went viral. It is one of Figen's most cherished memories of her son.

"I'd set up a Christmas craft stall at the local market but I hadn't sold anything," Figen said. "I texted Martyn to say I was having a rough day and so he decided to do something about it."

Martyn, who was a big social media presence with a huge Twitter following, tweeted that he was sad because his mum was struggling to make sales.

His online plea caused a heap of people to jump online and buy the bears and keepsakes that she had knitted. "I was overjoyed," Figen said.

"After Martyn died, someone started a hashtag on Twitter, #BeMoreMartyn," Figen said. "He lived life to the full and embraced every moment. I hope other people are encouraged to do the same because you never know when it's going to be taken away from you."

The message behind #BeMoreMartyn is now the subject of a play that celebrates Martyn's life, with all the profits going to charity. 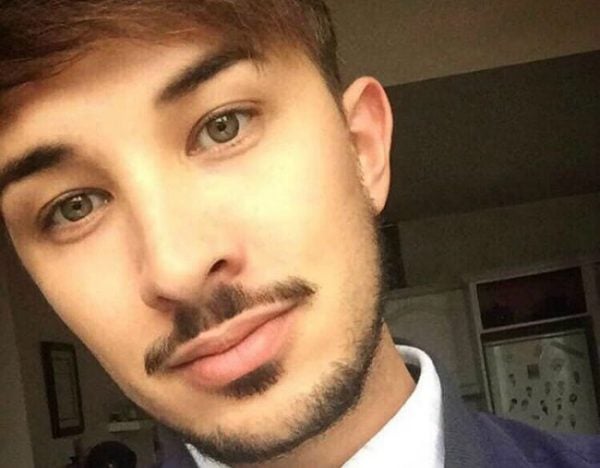 She believes the world has an abundance of goodness that outweighs the darkness and has been trolled online for publicly forgiving the terrorist who killed her son.

"I have no feelings of hate or anger at all because I don't think this person deserves any of my emotions," Figen said. "When I saw his photo, he looked so young, and I just thought 'you stupid little idiot'. He fell hook, line and sinker for those warped ideologies."

Figen now gives talks to impressionable young people in schools and in prisons to try to prevent them from being taken in by terrorist organisations.

"If I can stop one person from doing what he did, even if it takes 10 years, it will be worth it," she said.

Figen is also petitioning to introduce Martyn's Law. The petition description reads: "My son Martyn Hett was one of the 22 people murdered in May 2017 at the Manchester Arena whilst attending a concert.

"I wrongly assumed that since this tragedy event organisers have significantly increased security checks. I was at a concert last week and nobody checked tickets or bags.

"The response of people indicates that up and down the country security checks are very patchy. Some places do checks, some have metal detectors, some open doors at the interval for smokers, but then anyone can walk in from the street. This needs to be standardised as a legal (Martyn’s Law?) obligation, not a discretionary choice."

"This is the legacy I want to leave behind for my son," Figen says.