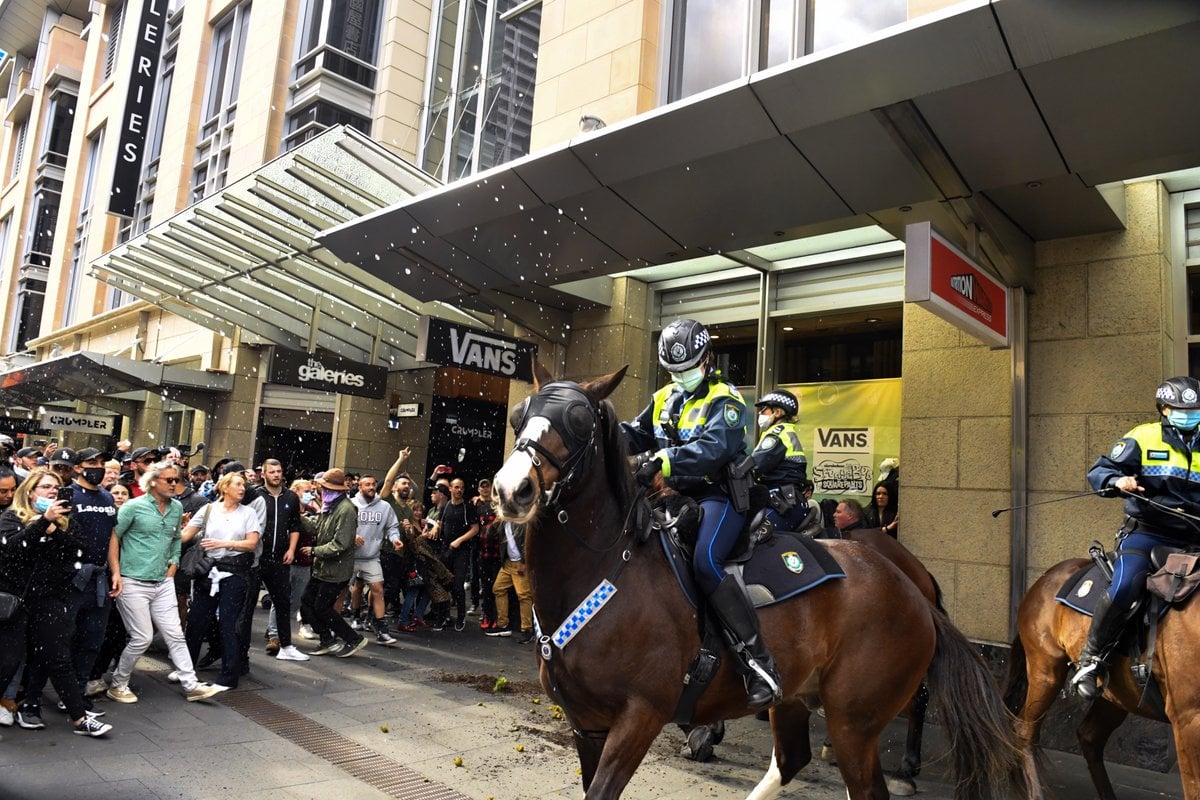 A photograph of a man striking a horse is going viral.

Taken at the anti-lockdown protest in Sydney on Saturday, attended by 3,500 mostly maskless people, the demonstrator wore a 'Free Speech' shirt as he extended his arm to a police horse's jaw.

Photographed by Brook Mitchell, the image shows a moment amid the chaos. Surrounded by protestors who are fiercely defying lockdown laws, police officers trying to control the sometimes violent crowds and horses who appear distressed by the disorder; the photograph represents the great unrest.

Not visible in the image is the disease they are protesting against. With infections rising each day, there are growing fears the protest will be a 'super-spreader' event of COVID-19, which in the past 24 hours has killed a Sydney woman in her 30s with no pre-existing health conditions.

Online, thousands have expressed their outrage that a man put his fist to the face of an innocent horse.

The Sydney Morning Herald photographer who captured the viral image has said he himself was pushed to the ground amid the chaos.

“In all the years I’ve been covering protests in Sydney and other places, this was definitely the most violent,” he told the publication.

However, there is also a video of the encounter which is being circulated in anti-lockdown groups, who are asserting the man did not 'punch' the horse.

Here’s some vision of the Sydney incident between the police horse and the man in the FREE SPEECH shirt. The footage is going around anti-lockdown groups, claiming it shows the guy didn’t “punch” pic.twitter.com/ILQtCRuaqJ

Online, people are arguing whether the horse was pushed or poked or shoved. However you define the fist-movement, police have claimed it was "cruelty upon an animal" and - after surveilling the footage - have arrested him.

The man at the centre of the viral photo was specifically charged with joining or continuing in an unlawful assembly, committing an act of cruelty upon an animal and not complying with a noticed direction in relation to COVID-19.

He was refused bail and will today appear in Parramatta Local Court.

Meanwhile, we've since learned the horse, whose name is Tobruk, is doing well.

"Our beautiful brave Tobruk safe and uninjured after his awful encounter today," NSW Police shared to Facebook. "Thank you again everyone for your words of support."

Tobruk is not the only horse who was at the centre of alleged violence on Saturday.

Other footage, from elsewhere in the protests, shows countless objects - from plastic bottles to pot plants - being thrown at mounted police as the crowds turn from peaceful to, occasionally, violent. 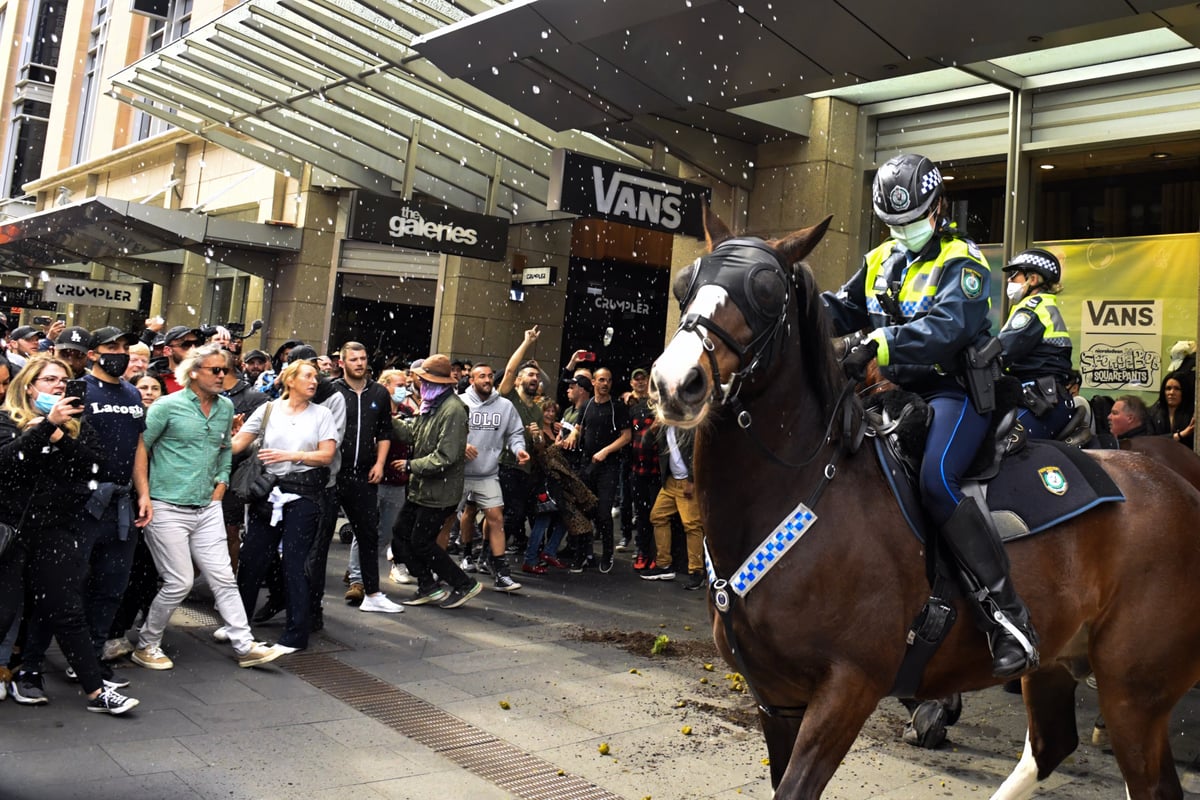 Objects from plastic bottles to pot plants were being thrown at mounted police during the anti-lockdown protests. horse Image: AAP.

The man at the centre of the viral photo also isn't the only person who has been charged with using cruelty upon an animal.

A second man was arrested on Saturday night in relation to another encounter with a horse.

NSW Police said the 36-year-old man has been charged with assaulting an officer in execution of duty, committing an act of cruelty upon an animal and not complying with noticed direction in relation to COVID-19.

NSW Premier Gladys Berejiklian said on Sunday she was "disgusted" by the chaotic scenes.

"It broke my heart," she said. "Millions and millions of people across our state are doing the right thing and it just broke my heart that people had such a disregard for their fellow citizens.

"Each of those people who protested illegally - I’m sure have loved ones. They are going to go home and risk passing that virus onto the most closest people to them."