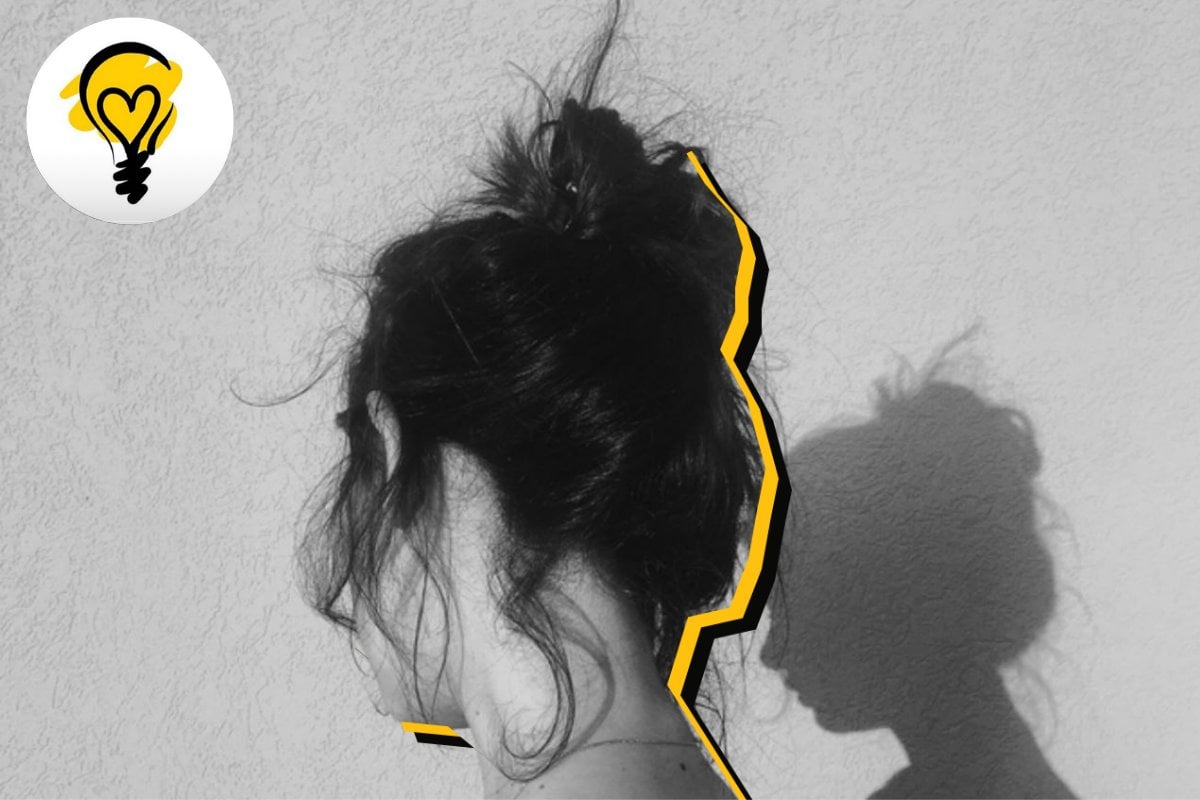 When victim-survivors of domestic and family violence (DFV) are asked to reflect on how their friends and family could have best supported them when they needed it, they tend to repeat two words:

They wish they had been listened to. And believed.

They don't look back and think anyone on the outside should've intervened. That they needed a saviour to turn up at their door, 'rescue' them from their abuser and force them to leave.

They know the implicit risk that comes with leaving - that the period just before and after leaving is often the most dangerous.

READ: 'He took out a million dollars in loans.' The problem with the question: why didn't she just leave?

Instead, they ask that we - as people who are likely to know and love someone, at some point in our lives, who experiences DFV - listen and believe.

Don't be scared to ask. Then listen without judgment, and believe what they're saying.

The abuse you can't see

The term 'domestic violence' in some ways does a disservice to the reality of intimate partner abuse. While 'violence' evokes images of bruises and broken bones, physical fights and calls to the police, the reality is far more complex.

DFV might be better described as ‘intimate terrorism,’ the experience of living under coercive control, which can manifest in a number of insidious ways.

Psychological terror, caused by actions like isolating a person from their family and friends, threatening to estrange them from their children, limiting their spending or implementing strict rules for how they must behave, is a way for abusers to restrict the freedoms of their victim without leaving marks behind. To those on the outside, these types of abuse might be invisible.

That's why it's so important to listen and believe. Because you won't always be able to see the signs of DFV.

Listen: For one week, Mamamia's No Filter podcast focused on stories of overcoming DFV. Post continues after audio.

But how does a victim-survivor know who they can trust? Who they can go to and be supported, without worrying that the situation could be escalated?

What to do if someone you know is experiencing abuse

Speaking to Mamamia earlier this year, Dr Susan Heward-Belle, a leader in DFV research, said if you witness or overhear immediate physical assault, then you should call the police. However, if you recognise that someone close to you is caught in an ongoing pattern of coercive control, you need to be wary of how you approach the situation.

"I think it's really important to honour and privilege [the person being abused] as being the experts in their own lives. Have a conversation with them to tease out how they feel about you actually taking interventions on their behalf," she said.

"Sometimes we can kind of run in guns blazing and inadvertently create a situation that creates less safety for them. So I think it's really important to be talking to them about the services that are available out there to assist them. It might be about navigating really complex legal and social systems. It might be about trying to assist them to get in contact with a domestic violence liaison officer at a police station.

"You really need to help your friend or family member get the right advice from the right people; people who actually really understand the dynamics of domestic violence and understand how dangerous circumstances can be for women and children."

READ: 'It doesn’t happen to people like me.' The stories we don't imagine when we think about domestic abuse.

“For a lot of people, staying in a violent relationship is actually safer than leaving,” Field told Mamamia.

“You hear commonly that people are threatened with being killed, they’re threatened with their children being harmed, their friends and family being harmed, and at least when you’re with somebody you know what they’re doing. You know where they are, and there’s some sense of stability even within that volatile relationship, which you would lose once you’ve left. And the research shows that the period immediately after leaving an abusive partner can be really dangerous.”

So, Field says, this is what you can do to help:

"If somebody is in immediate risk, then always call the police," she said. "We know that people do die - one woman a week dies, and one child a fortnight - so DFV is a risk, and it’s important if you think someone is imminently at harm, then to call the police." 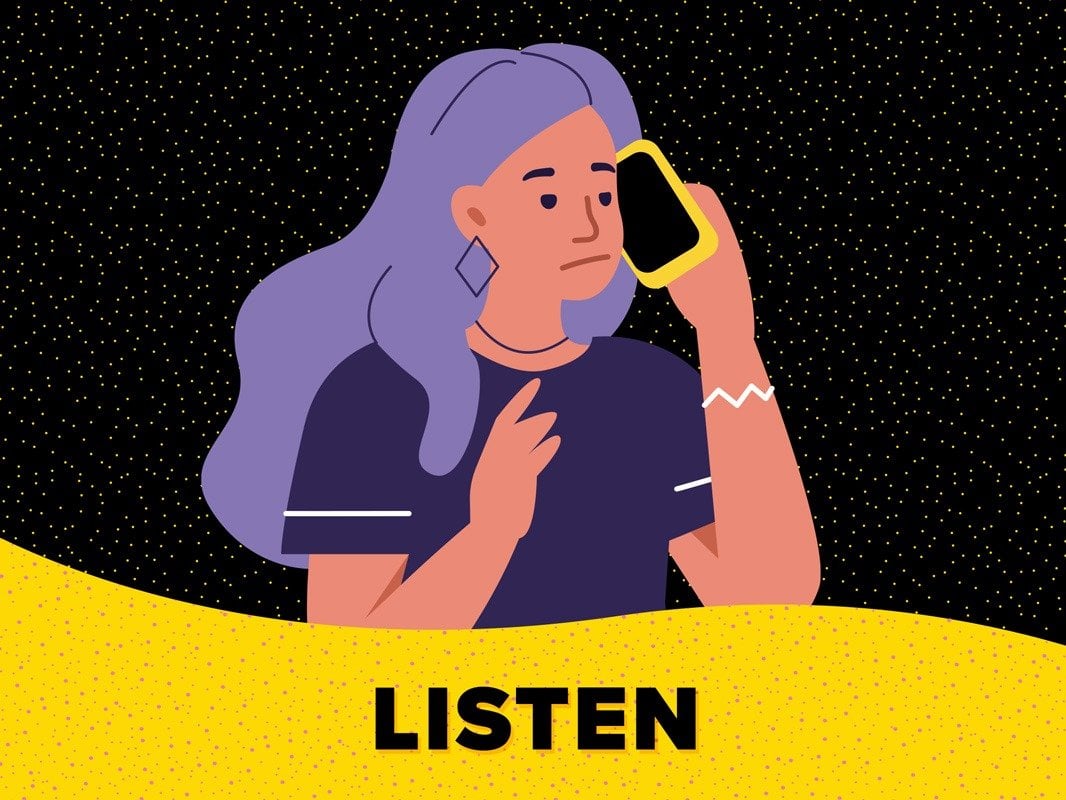 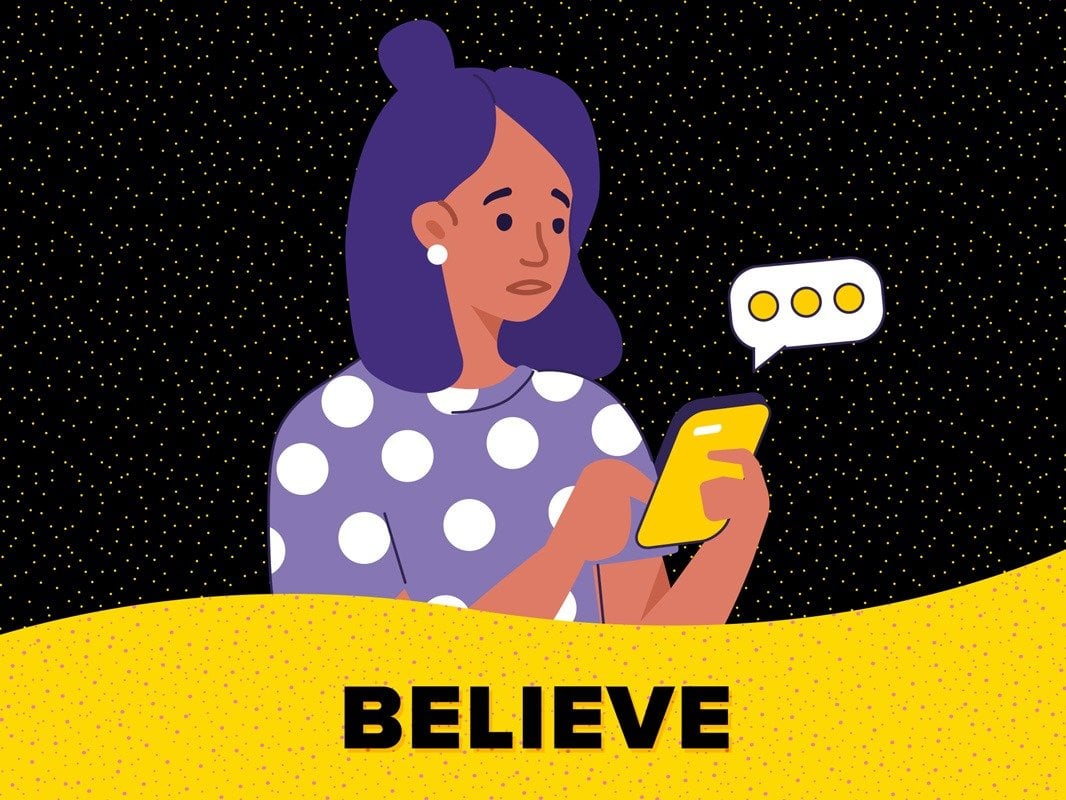 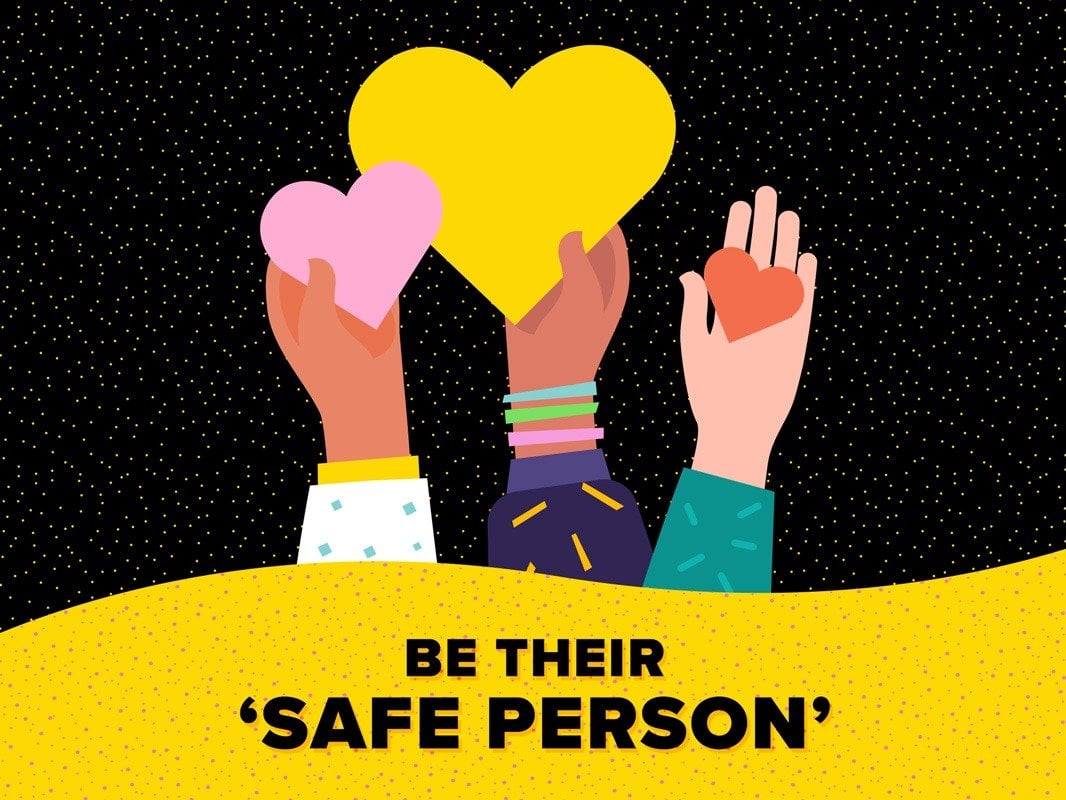 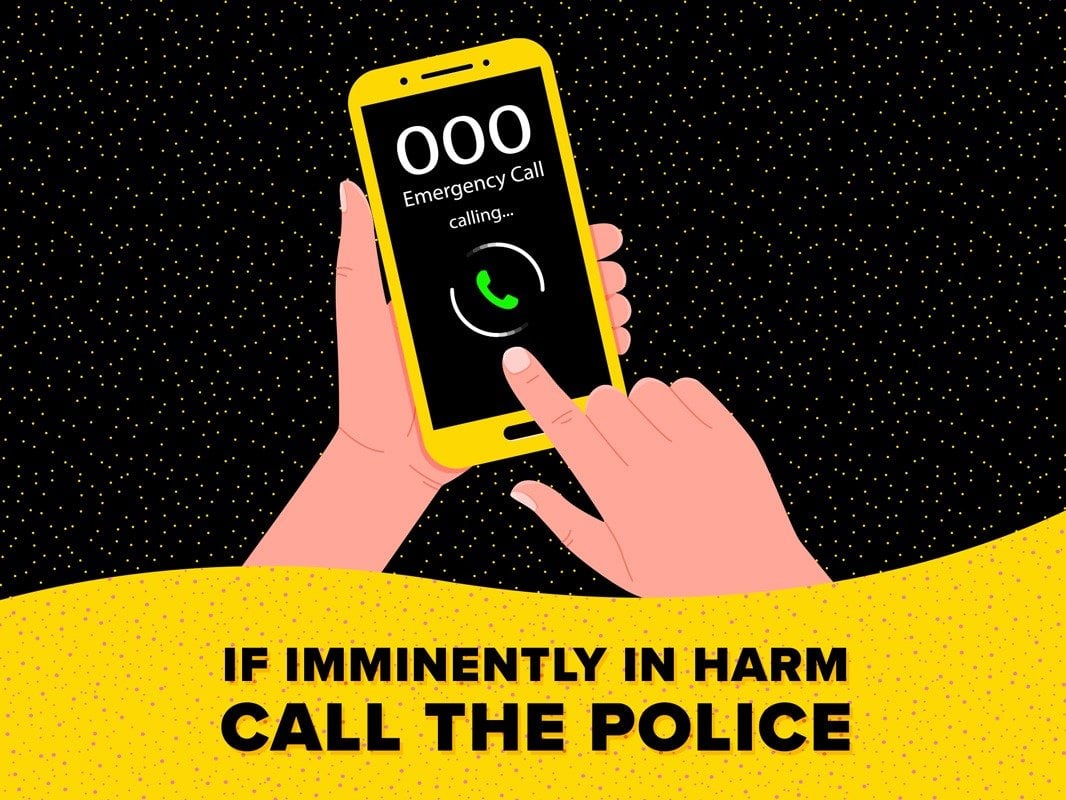 On average in Australia, one woman a week dies at the hands of a male partner.

A recent review in NSW found that 77 out of 78 domestic perpetrators had used coercive control on their partners before they killed them.

For many perpetrators, killing their partner will be their first act of violence against them. But they almost always have a history of coercive control - whether that's intimidation, humiliation, controlling the finances, gaslighting, or isolation.

So how do we raise awareness of these 'invisible' forms of abuse, and signal to victim-survivors that we're here to listen and believe, whenever they're ready?

Mamamia's Lighting The Way campaign aims to spotlight, for people experiencing DFV, the willingness of people in their social circle to listen and believe.

Using a subtle Instagram filter named Lighting the Way, which you can find on Instagram stories, you can take a photo of yourself and share it with your social network, signifying that you know and understand the complexities of DFV, and are open to listen and believe should someone who sees it need support.

Here's a step-by-step guide on how to use it:

Open your Instagram camera, or swipe left for Stories.
,,

Scroll through the featured effects via the 'browse effects' button. If you follow the Mamamia Instagram page, the Lighting the Way effect will come up automatically. 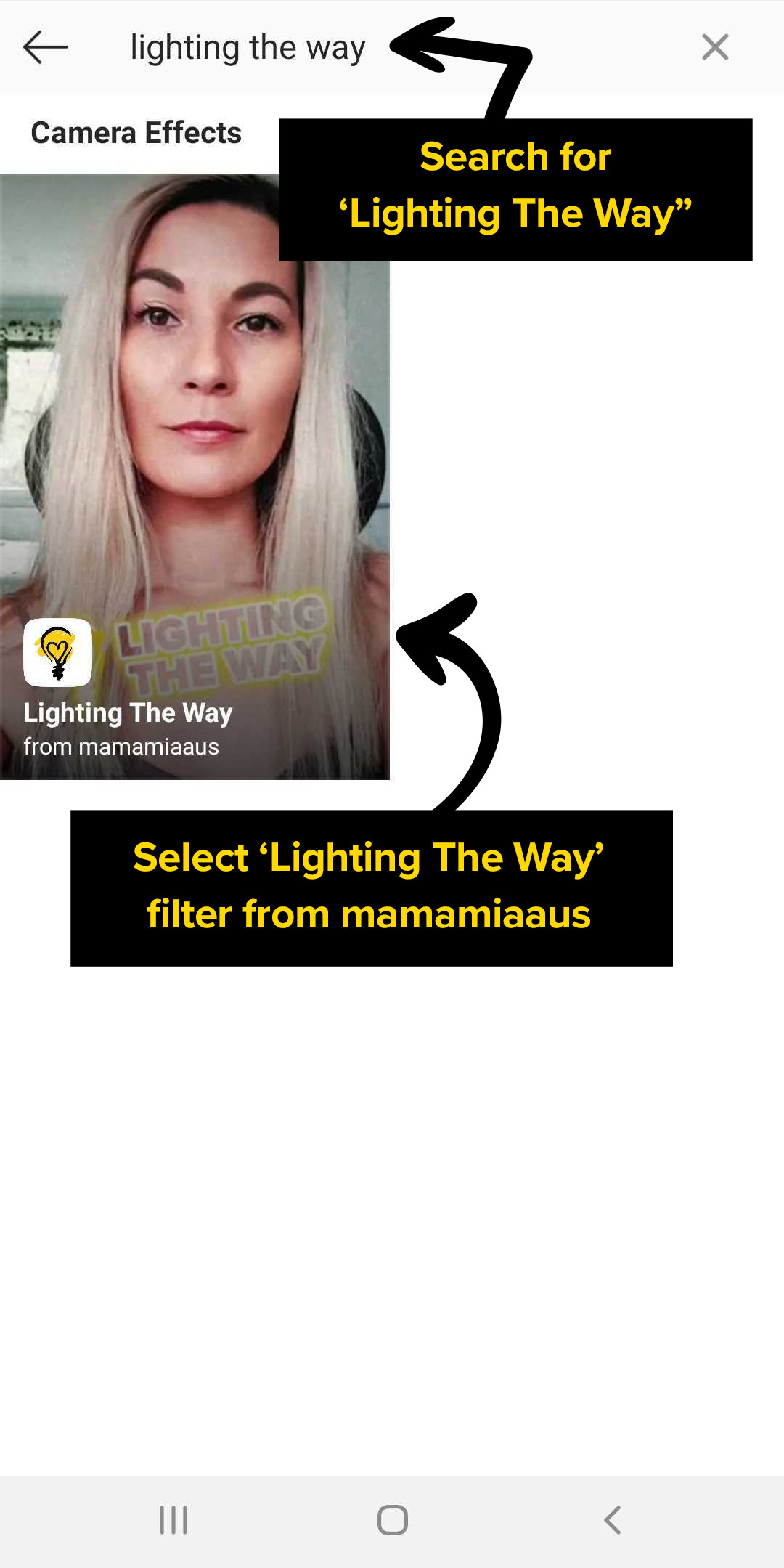 Select the 'Lighting the Way' filter.

Turn the camera into selfie mode to use.

Finally, tag @mamamiaaus if you feel comfortable, so we can reshare and ultimately help more people to become a part of the campaign.

Speaking to Mamamia earlier this year, domestic abuse survivor Juliet Moody had a message for people who want to help and support people in their lives who might be experiencing DFV.

"When someone comes to you and talks to you about their experience — if they're feeling disempowered in a relationship or they're feeling like someone's controlling them or overly critical of them — listen without judgment, believe what they're saying and try and support them to understand that perhaps they're not in a safe relationship," she added.

"There's such power in standing next to someone and saying, 'I believe you, and I'm standing here as your advocate'. We can all do that in our community."

By listening and believing, we can light the way for the next chapter in a victim-survivor's life.

As part of the Next Chapter program, Commonwealth Bank has created a range of helpful guides and resources about domestic and financial abuse, including a guide about the impact of coronavirus for those experiencing domestic and family violence.