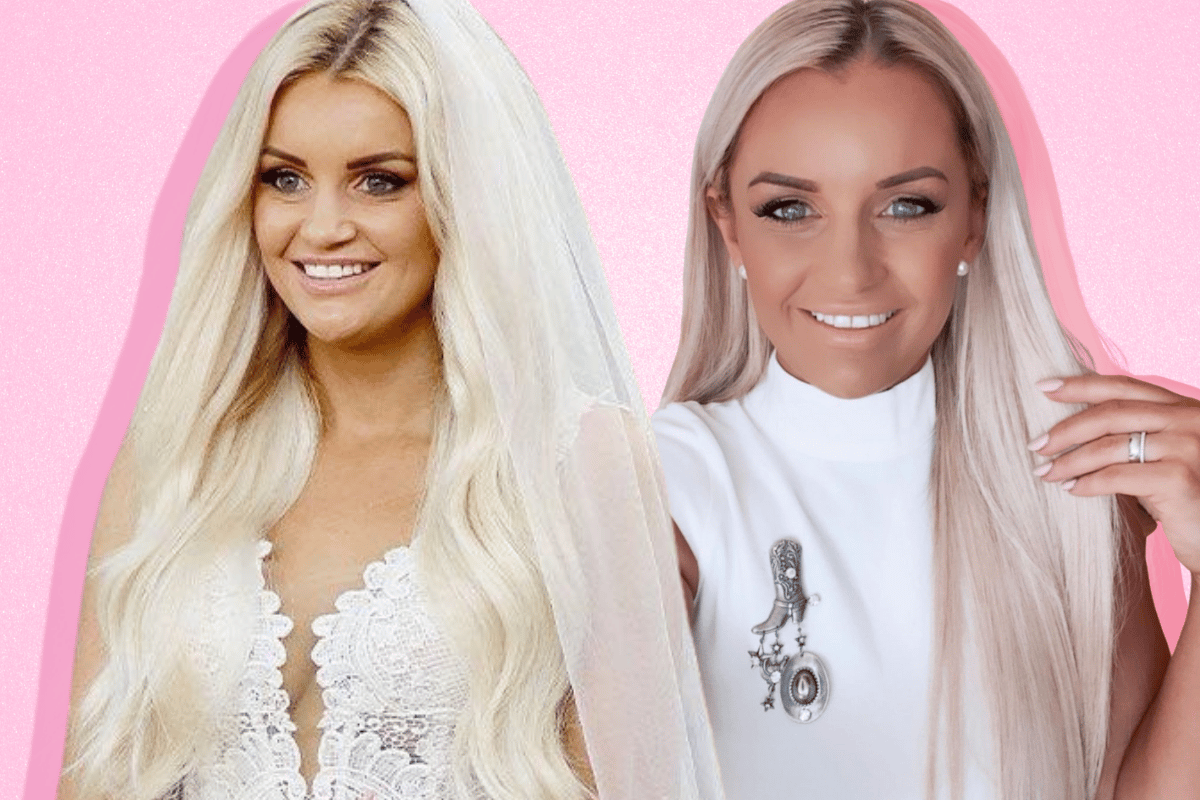 Like many of the contestants on this season of MAFS, Samantha Harvey signed up all bright eyed and bushy tailed looking for love.

The 31-year-old mother of two had previously been in a 10 year relationship with her ex, who she later found out cheated on her.

Now, in a cruel twist of fate (and possible producer tampering), Samantha's on-screen husband Cameron Dunne is  rumoured to cheat on her with fellow contestant Coco Stedman.

Watch the trailer for the current season of Married At First Sight. Post continues below.

As we continue to watch the cheating scandal unfold, here's a look at everything we know about Samantha, including her life before reality TV.

Samantha's relationship with her ex-husband.

Before signing up to MAFS, Samantha was in a 10 year relationship with her ex-husband, who was sixteen years her senior.

The age gap was previously brought up on MAFS when fellow contestant Coco asked how old she was when she started dating her ex-husband, who she shares two kids with,

"How old were you when you got with him?" Coco asked Sam at the hens' night.

During another point on the show, Samantha explained that she found out her ex-husband had been cheating on her for five years. And the proof was in a bunch SIM cards.

"It was all great at the start and it was like the picture-perfect family. But, one day I actually had my baby on my hip and my toddler running around and I was decluttering and I discovered SIM cards of lots of different numbers," she explained on the show.

"That was pretty much the evidence of my husband cheating on me for more than five years. It was humiliating."

Three months after finding out her husband had cheated on her, Samantha was admitted into hospital after a suicide attempt.

"In July 2016 I was admitted into the Canberra hospital for attempting to take my own life," she wrote in an Instagram post, later shared by the So Dramatic! podcast.

"After the very public and humiliating separation between my ex and I, I found the pain and the scars of having my trust broken on so many levels too much to handle,"

Following her divorce, Samantha moved out with her two sons.

"All I could afford at that time was the shittiest house you’d ever seen in your life. There was cat wee dripping on the carpet. I actually would take the boys to the tip to buy our furniture. It was squalor. That’s not where I wanted to end up."

"I got on YouTube, I googled how to tile. I did everything I could to save money and also try and make this house livable for the boys and I."

In 2017, Samantha shared a photo of herself on Instagram that her son Charlie took shortly after she found out her husband had cheated on her.

"Charlie took this of me, without me knowing.... at one of my lowest points," she captioned the post.

"This believe it or not is me standing in my family home kitchen on the morning I found that my husband had been cheating on me for years. I was completely numb... couldn't talk to my children, couldn't think straight, couldn't see what my next move was except for unpacking a dishwasher... I had my two children and my dog Tonka which was my third baby to think about, but had no answers."

"I found this on my phone a couple of months ago and could not believe that this Sam made it!!" she continued.

"So skinny to the point of breaking. This is the result of someone striving for perfection to please someone that kept raising the bar... Kept changing the game as soon as I looked like I was keeping up, kept standards so high that I thought I was a failure because I couldn't keep up."

Since then, Samantha has well and truly turned her life around. She now works as a property developer and owns several businesses in her hometown, including her hair salon called Kovu.

What Samantha has said about the MAFS cheating sandal.

Samantha addressed the cheating rumours surrounding Cam and Coco during an interview on Hit Hobart 100.9 with Jimmy & Nath last week. But she was careful not to give away too much.

When asked if Cam cheats on her during the show, Samantha replied: "Look, you guys are going to have to watch and see it all play out."

"This whole moral thing that is coming up now will be raised again later in the show… you guys are going to have to watch to find out because that’s a massive spoiler and I’m not going there," she added.

The hosts then asked if she was going to be involved in drama this season.

"Yeah… I literally… I promised my mum and dad I’d go on the show and wouldn’t be in any drama. That I’d be the quiet little mouse at the end of the table, but… [laughs]."

Are Samantha and Cam together after MAFS?

You probably already guessed it, but it doesn't look like Samantha and Cam end up together after MAFS.

Besides the whole cheating scandal, Samantha recently hinted that her and Cam don't last by calling out the matchmaking on MAFS.

In a video on her Instagram stories, obtained by the Daily Mail, the 31-year-old pointed out the producers on the show First Dates are better matchmakers.

"Yeah, they actually match them properly," Samantha told her friend in the video.

She also asked why the contestant on First Dates wasn't on Married at First Sight.

In a third video, Samantha continued to gush over Jake from the show saying, "Mate, that's my type".

The videos were filmed on January 29, ahead of filming the reunion episode in February.

So it seems her and Cam don't last after all.

Married At First Sight continues on Wednesday at 7:30pm on Channel Nine.

L
lisa.livori a year ago