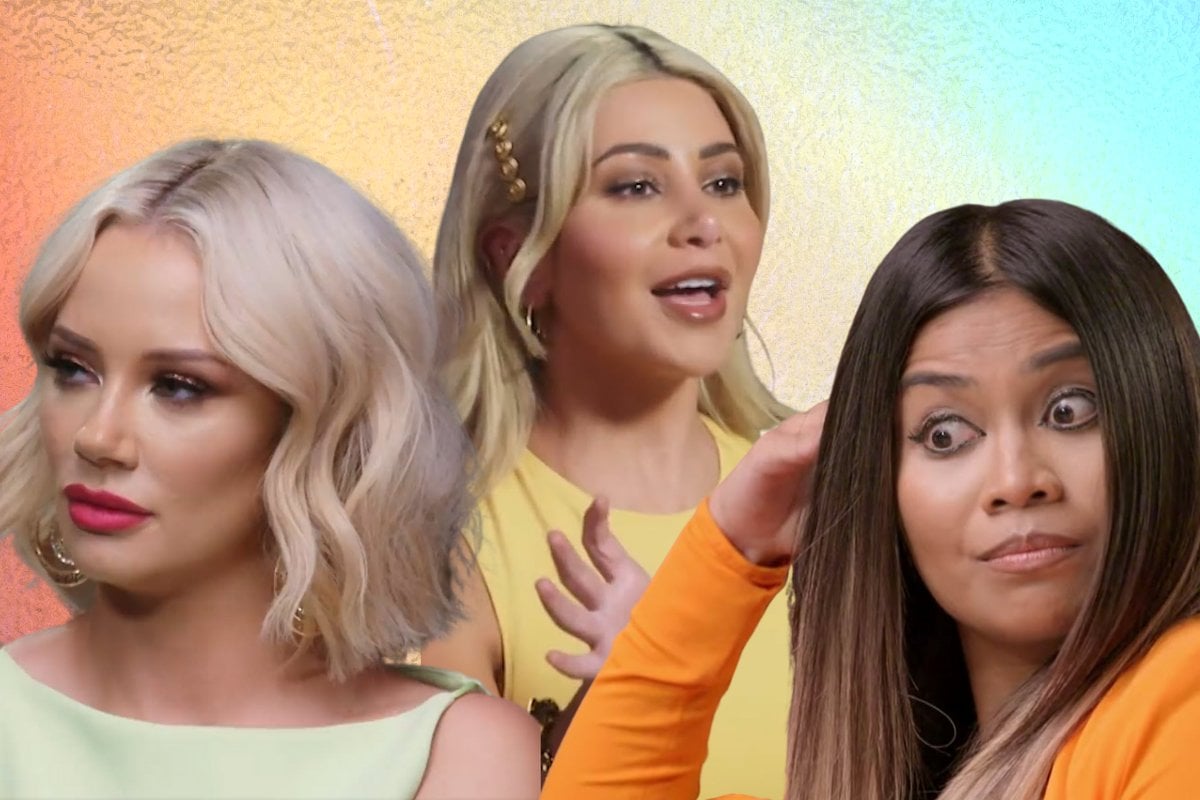 Keeping up with the drama of multiple reality TV stars is really hard, especially when needing to live one's own life, stay across the latest on the world's imminent implosion and sleep.

So uh, you weren't the only one completely and utterly confused by all the drama in Sunday night's Married At First Sight reunion.

It's been a while since we saw most of the reunion's stars on our screens, which means pretty much all the drama spoken about (and thrown in their faces) took place via social media.

It's... a long and complicated road, but we've done our best to wrap it up for you. Because... journalism.

For context, most of this drama surrounds four of the women involved in MAFS season six; Jessika Power, Cyrell Paule, Ines Basic and Martha Kalifatidis - but other cast members may pop up in the explanations because 1. it's a very complicated, tangled web and 2. these people love the drama, c'mon.

What happened between Ines and Martha?

But it didn't take long for the friendships to splinter.

From what we've figured out, it seems this all began at the 2019 Logies, which Martha and Michael were invited to while Jess and Ines were not.

They then crashed the party and documented their nights on social media, which then made headlines.

Following his, Martha and Michael discussed the drama in an Instagram Live and on YouTube, and Martha said she'd rather have a root-canal than be friends with them again. Brutal.

Jess and Ines then responded over social media, accusing her of cheating. Insta account MAFS Funny has explained it all below, with the accompanying screen shots, in case you were... busy that day.

Fast forward to 2021, and Martha told KIIS 106.5 the feud began because she'd greeted Ines and Ines had then dry-wretched in her direction.

"I didn't pretend to vomit on her for no reason, I don't think anyone reacts that way for no apparent reason, so that's the story behind that," she told the Daily Mail

"It's all really just stupid, immature stuff that could have been handled better but I think we are both well past it and probably over hearing about it."

What happened between Jess and Ines?

Okay, so in the above Jess and Ines were on the same side, but by the reunion Ines was actively encouraging Cyrell to go after Jess. So when did they fall out?

Literally... at the reunion, apparently.

So Dramatic! has the goss, stating Martha pulled Jess aside at the beginning of the night and they hashed it all out, which actually put Jess offside with Ines.

Ines and Jess had a pact to stick together and when Ines saw Jess with Martha, she was not happy. So then she buddied up with Cyrell to piss off Jess.

Ines and Jess still don't speak, according to So Dramatic! host Megan Pustetto.

What happened between Cyrell and Jess?

So what we gathered from the reunion was that Jess questioned the validity of Cyrell's relationship with former Love Island contestant Eden Dally. This is true - and Jess herself shared it on her Instagram story. 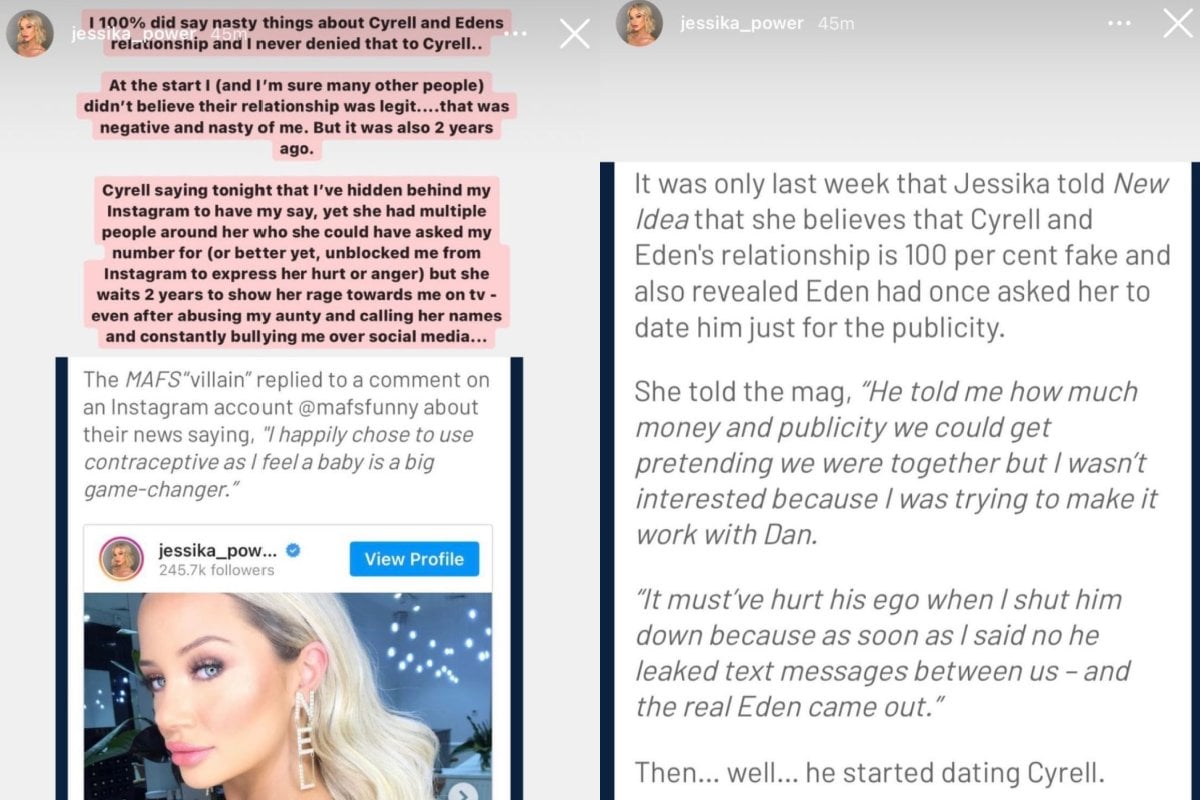 Yep. So Cyrell's issues relate to a couple of August 2019 interviews Jess did about her and Eden's relationship, which she said was fake.

She said Eden had previously asked her to date him for publicity, so she assumed he and Cyrell had an arrangement when they were spotted together soon after.

"I've always said Jess is jealous. She can't comprehend that Eden chose me and has committed to me, and that she will always be a one-night stand," Cyrell said, calling a 2019 fling between Eden and Jess "absolutely meaningless".

"This has all stemmed from the fact he never took her seriously and she wanted to date him. Jess accusing me of baby-trapping Eden is hilarious to both of us – she doesn’t seem to understand how happy we are."

She and Eden also responded to the backlash Cyrell has received from the episode, saying Jess had bagged them for two years.

Okay, now for a few questions unrelated to Cyrell/Ines/Jess/Martha because we're starting to look exactly like the math lady meme.

There are plenty of other MAFS alumni who weren't at the reunion, but only those from season five and six (2018 and 2019) were invited as they were the two highest rated seasons.

Elizabeth and Seb were the exception, probably because Lizzie was also on season six and they also needed to bump up numbers for success stories (which... is awkward now, because they've since broken up).

What happened to Troy?

Umm... we were pretty sure we heard something about a PARASITE, and we were right. What the hell.

"I actually had a parasite for about six months," Troy told Elizabeth during the reunion.

He elaborated in an interview with Woman's Day:

"It was a real tough 2020," he said. "I had this health issue – a parasite which went diagnosed for about five months and wreaked so much havoc."

Troy saw several doctors, but none were able to get to the bottom of his drastic weight loss, upset stomach and discomfort until he saw a gastroenterologist in December.

HOW DOES THAT EVEN HAPPEN?

There's a lot to cover in Monday's reunion part-two, but we hope John Aiken also brings up the... parasite.