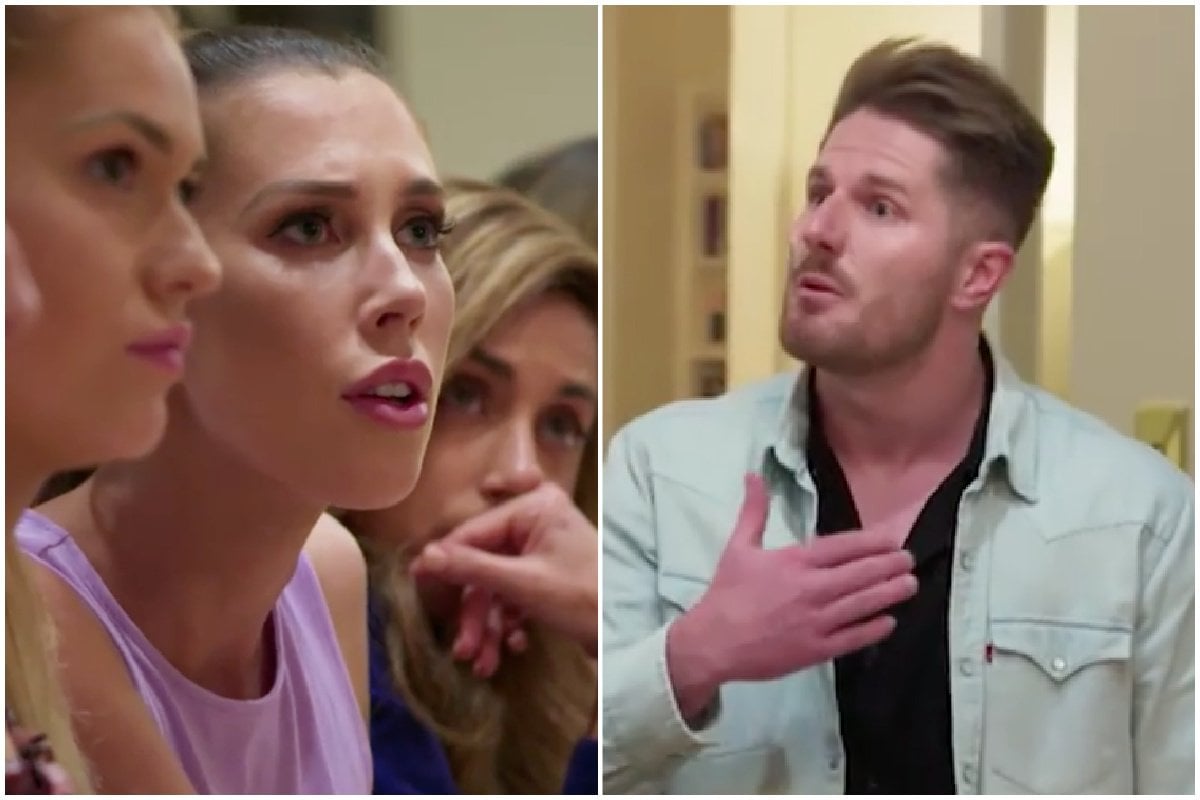 We begin in Alana and Jason's room, where Alana is trying her best to articulate exactly what is wrong with Bryce.

She explains that his decision at the Commitment Ceremony (to leave stay) didn't make any logical sense because a) he knew Melissa was staying, and therefore b) the only reason to write leave at all was to hurt his wife's feelings.

That's when Jason speaks and we don't say this often but Sir we're going to need you to shut your mouth.

Okay. So that's fine (it's not) it's just that which part was heroic and relatedly, why.

Alana is horrified and doesn't know what to do with her alleged husband who apparently thinks it's admirable to publicly humiliate your wife. Repeatedly.

Over in Bryce and Melissa's room, we just have a quick question.

Why the f**k are Bryce and Melissa sleeping in the same bed?

Melissa is politely asking for clarification on why her husband a 'lil bit tried to quit their marriage 12 hours ago. He explains he was doing it for her (???) because of Rebecca's actions (??) and sums it up by explaining that he does care about Melissa and "that's why I crossed it out".

There is no paper shortage. That we know of. Why couldn't you get a new piece of paper or at the very least turn your existing one over. Wtf.

Bryce tells Melissa, "I hope you understand why I did what I did," and Melissa responds, "of course I do and I really respect that you look out for me" and THIS IS BROKEN. DO YOU UNDERSTAND. 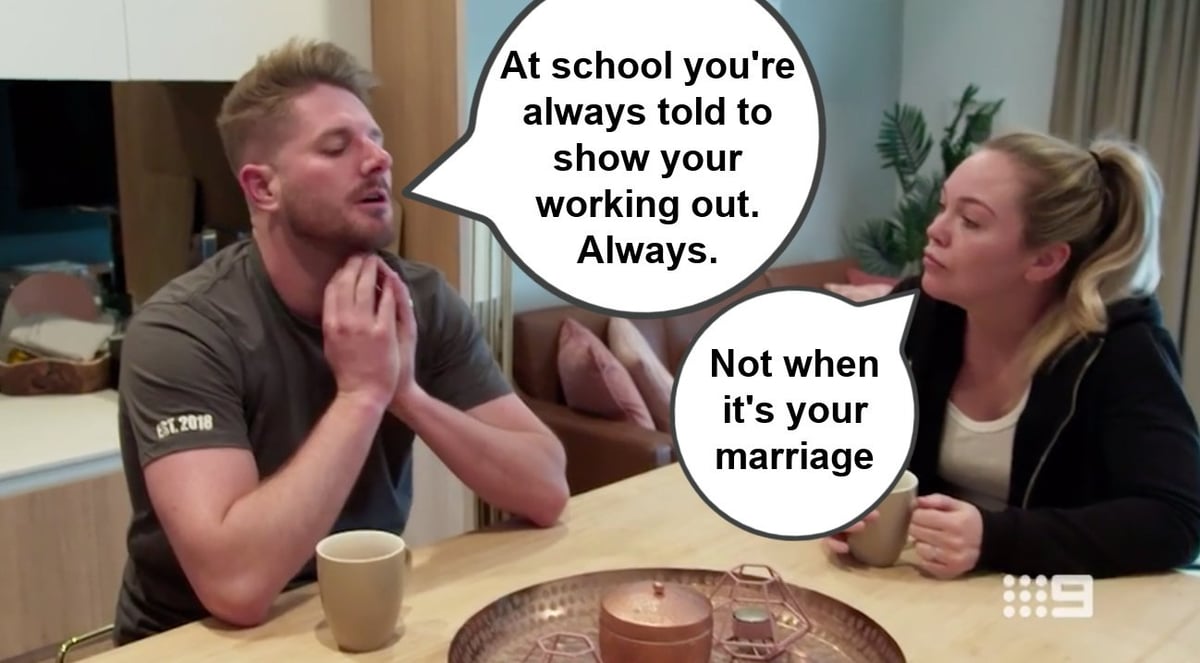 'I clearly showed that I was thinking of leaving you, but then chose to stay.'

Bryce says that all he wanted was for everyone to talk about Rebecca's behaviour and if that was the case then why didn't you bring it up instead of writing LEAVE FOR NO REASON.

Over in Beck's apartment, she's pissed off.

"He's so egotistic it's revolting," Beck says and ah. So close.

As they arrive at the retreat, we can't help but wonder if these couples need a holiday. After their... honeymoon. And then living in a hotel for the last month or so. But ok. 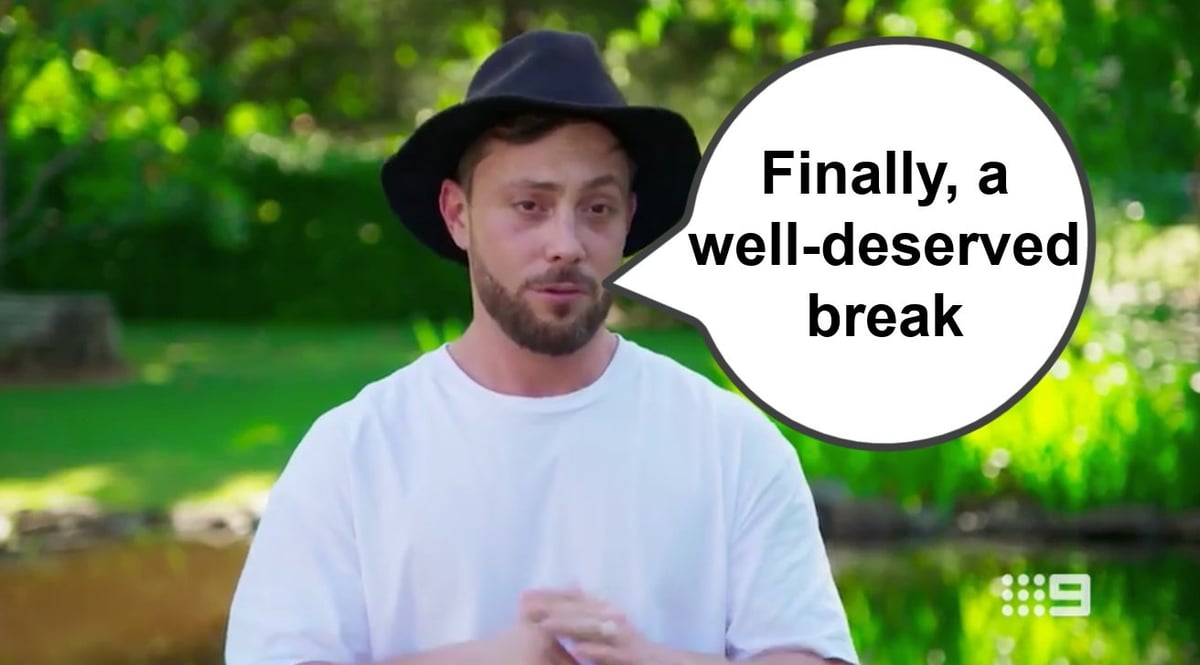 I'll get some r&r

Once everyone is settled, and Bryce and Melissa have somehow found a room in a totally different property, everyone meets for drinks.

Brett, who is sleeping separately from his wife Booka, attempts to greet her politely and no.

You see, Booka has effectively dumped Brett. But he thinks they're still in a relationship because that's the rules of the experiment but they're not the rules of... life. And no one. Not even John Aiken, can keep Booka in this relationship without her consent. 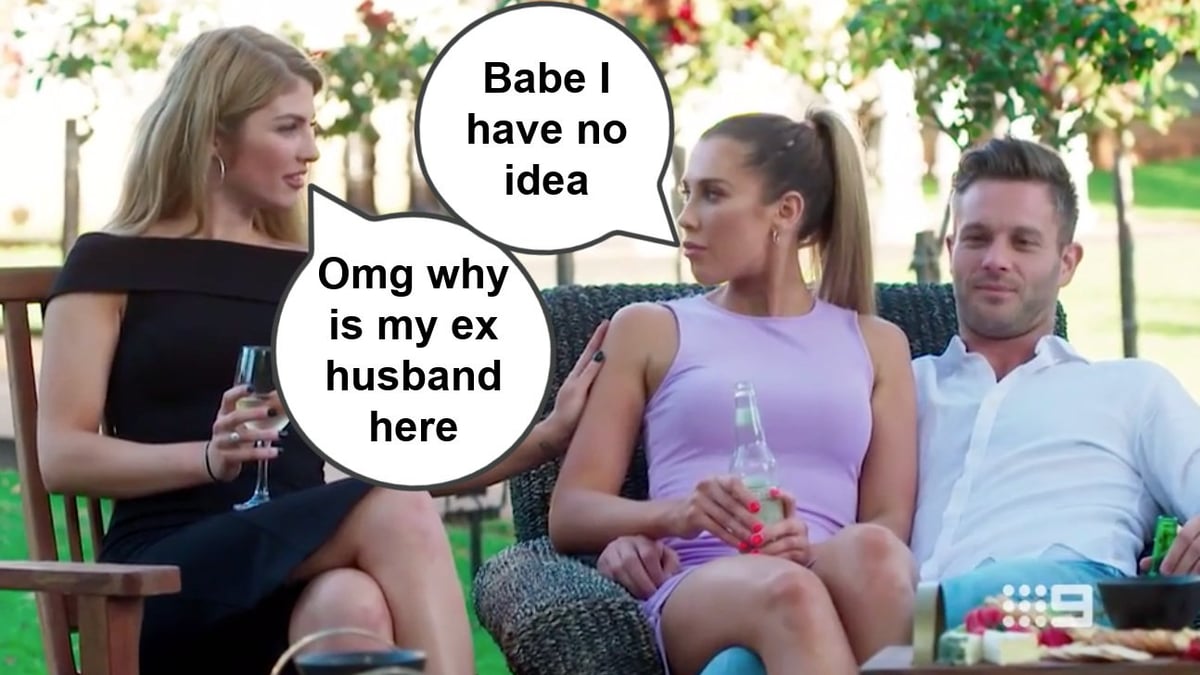 'He just showed up.'

While Johnny touches all the food on the share platter, and then hands it out with his f**king fingers in the height of COVID, Patrick asks Melissa how she's going.

She explains that her and Bryce have talked about the time he hurt her feelings for no reason, and she respects it.

Beck responds that Bryce is the biggest "douchebag on the show," which is objectively true and suddenly everyone is yelling.

Bryce's argument goes something along the lines of: "I had to protect my wife. By making her upset. And saying I want to leave. Why does no one understand," and we don't understand because your decision objectively doesn't make sense. 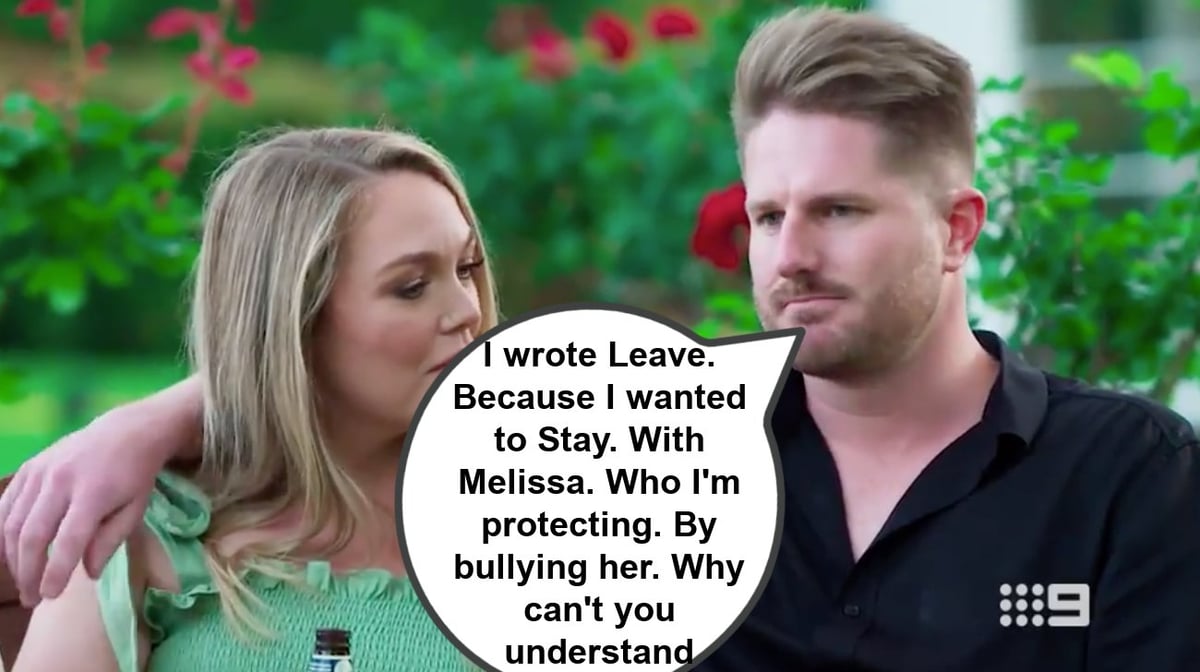 It's clearly either winter or a very cold night, yet everyone is dressed as though they're at a garden party in the height of summer. About three separate people mention how cold they are and why did no one edit this out is the weather crucial to the storyline.

When it becomes clear that precisely no one else is speaking to him, Bryce goes to have a chat with Jason, leaving Melissa with the rest of the group. But Alana uses the opportunity to let off steam about her husband's "blind loyalty" to Bryce, and Melissa JUST WANTS EVERYONE TO STOP TALKING ABOUT BRYCE.

Yes, he's the worst person you've ever seen on television.

Yes, his behaviour is borderline unbelievable.

Yes, he tried to leave his wife and then blamed the entire group, BUT STOP TALKING ABOUT HIM IT'S NOT NICE.

Melissa walks away from the group, and when she finds Bryce, he demands to know who was talking about them and what they were saying.

When they arrive at dinner, Bryce tells the group: "I just wanted to raise something before I sat down." 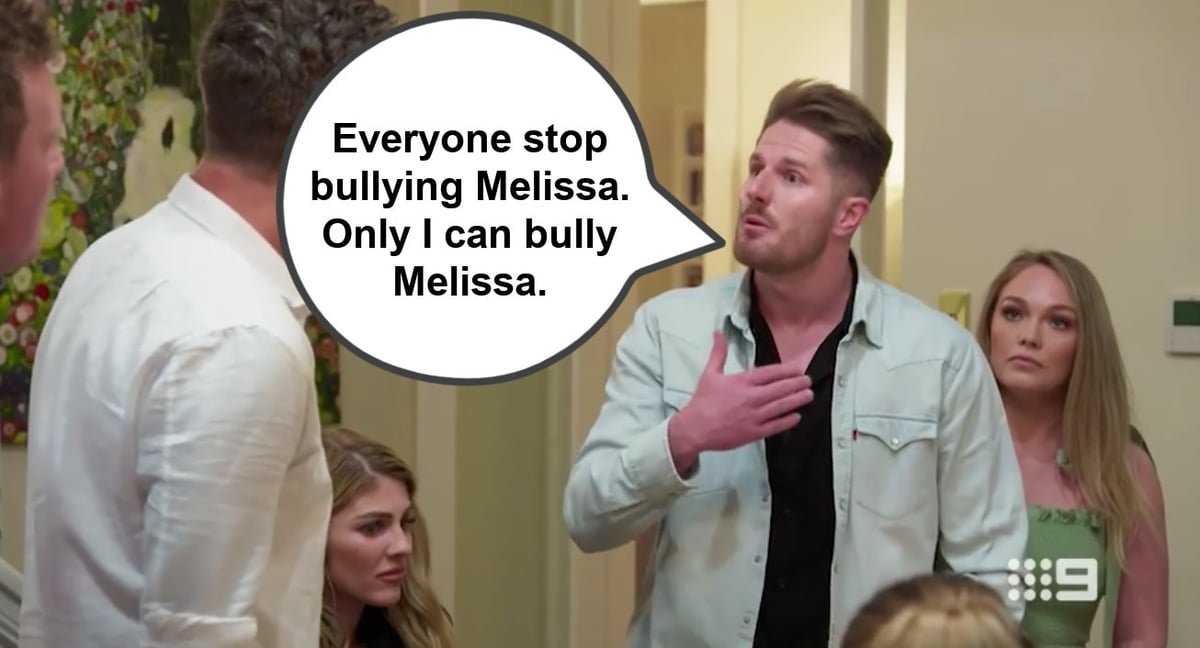 "How much clearer can I be."

That you're sorry for being cruel to your...

Bryce and Melissa explain to the group that everyone needs to stop talking about them, and Melissa wants them to know that she's so lucky to have Bryce to support her, through what has been the most difficult experience of her life.

Bryce jumps in and tells Beck that his wife was in tears because of HER, but Jake has been waiting for this moment pls. Because you DON'T yell at his WIFE while you're STANDING and she's SITTING but mostly he HATES goddamn BRYCE. 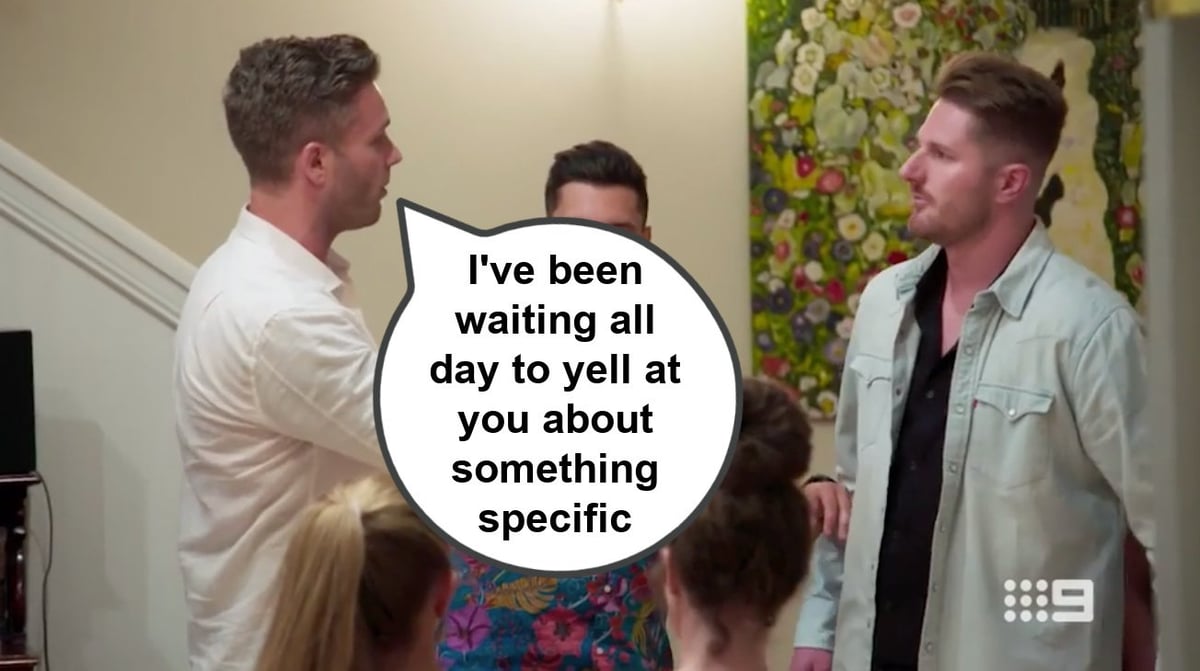 Like a character in a terrible teen movie, Bryce says, "the truth hurts - seems like it cut deep tonight," and leaves and Sir why can't you attend a dinner party without being yelled out of the premises.

With Bryce and Melissa back in their... private residence, Alana decides to raise the issue of Jason's friendship with Bryce. Publicly.

Alana tells everyone that Jason called Bryce's decision "heroic" which was obviously meant to be private because in retrospect Jason can see that heroic was a stupid word to use. 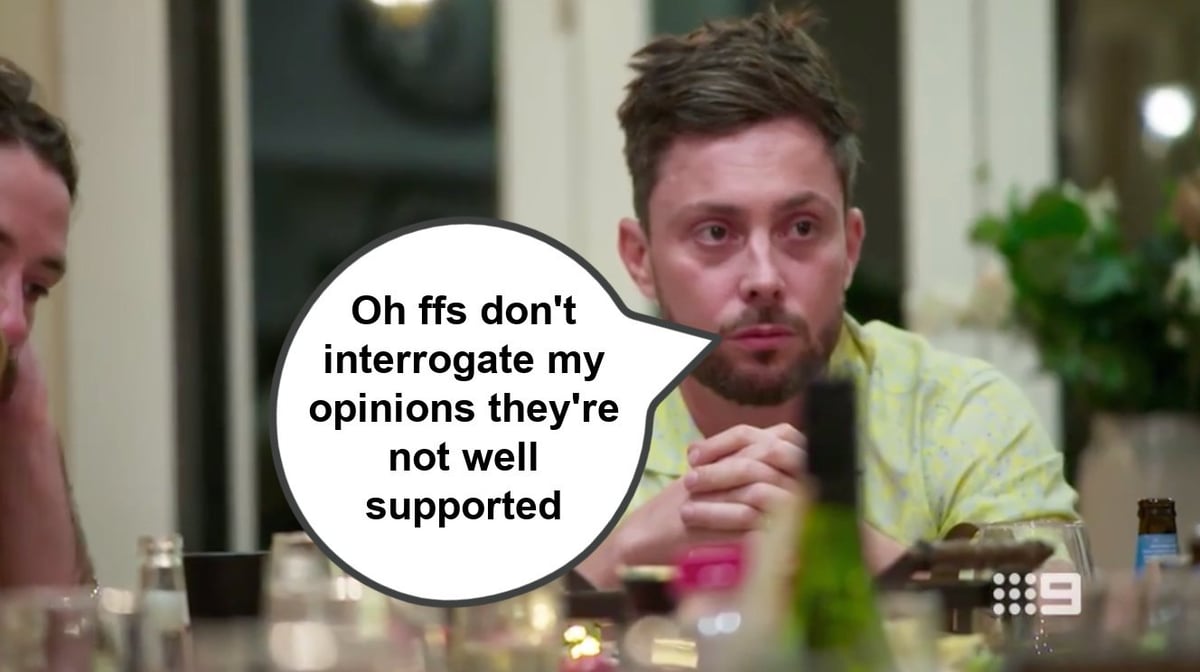 "I regretted what I said immediately. Because it was stupid."

Later on in their bedroom, Jason tells Alana he can't trust her and then they both start shouting.

Jason says, "PROMISE ME YOU'LL WRITE LEAVE" and Alana says "YOU'LL NEVER SEE ME AGAIN AFTER THIS," and did you know you can have a disagreement and not leave your marriage.

Alana starts packing her things and honestly we're low key impressed by how many marriages Bryce is ruining while keeping his firmly intact.

The Twins recap Married at First Sight ep 20: The most embarrassing decision we've ever seen.

The Twins recap Married at First Sight ep 19: Booka just learned how much her husband dislikes her.

The Twins recap Married at First Sight ep 18: When you break up in front of your parents.

The Twins recap Married at First Sight ep 17: The most tone-deaf groom in MAFS history.

Reply
Upvote
1 upvotes
First off, I get that this is 'just a TV show' and that it might even be a little (LOT) scripted, but one thing is really glaringly obvious to the WHOLE OF AUSTRALIA. This guy is messing with Melissa. He's screwing with her head. He's gaslighting her in the worst possible ways. He is making it so that a therapist in the near future will be able to pay for a fancy new car with the amount of money they will make from her. It's gotten to the point where it seems negligent of the producers not to step in. In a time where womens rights and the 'Me Too' movement is gathering welcome steam, why aren't they taking the opportunity to have the 'experts' take him to task for being such a vile human? Why oh why are they allowing someone who is clearly vulnerable, and possibly not the most emotionally or mentally stable, be continually humiliated and treated like garbage on national television? It's NOT good TV, it's her life. And her mental health. And I dread to think what reliving it through watching the episodes would be doing to her. Please, MAFS creaters and producers, DO BETTER! Help this poor woman before she becomes just another statistic. Women of Australia deserve better. Women of the world deserve better.