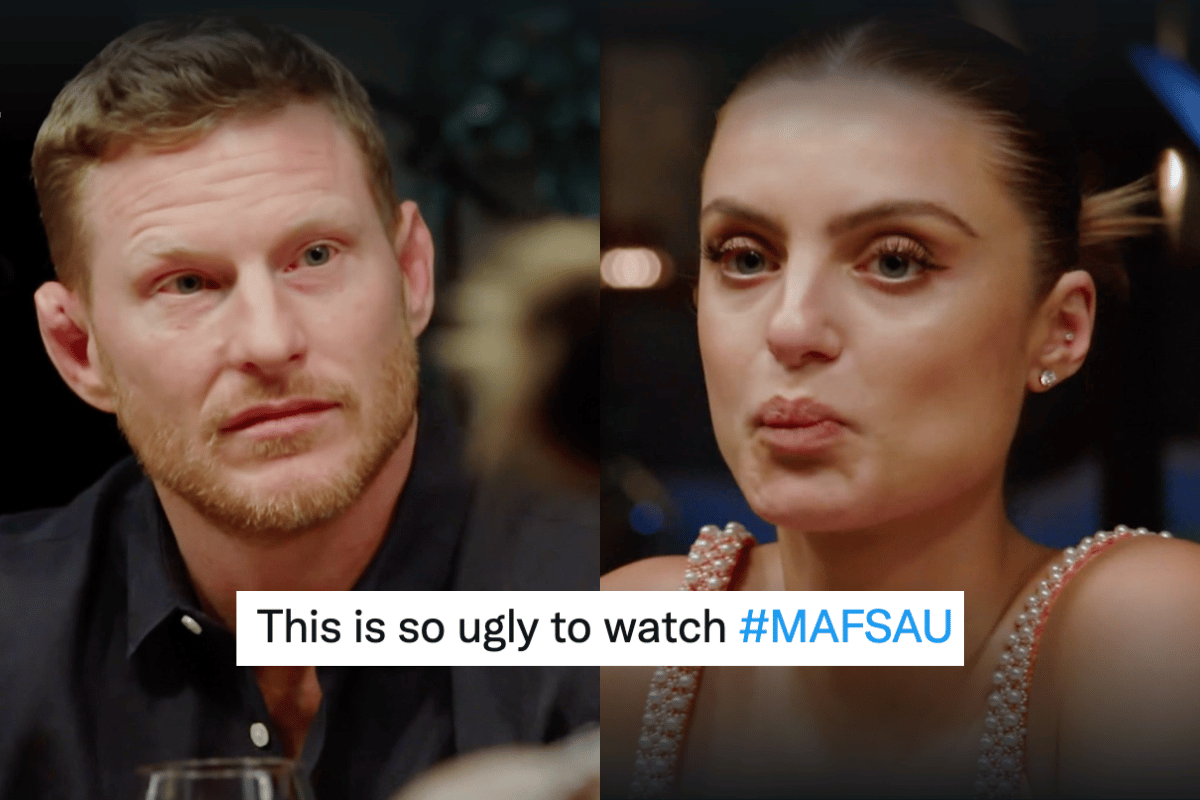 To catch up on all the MAFS 2022 recaps and gossip, visit our MAFS hub page. Want the MAFS recaps delivered straight to you? Sign up to Mamamia recaps here.

Tonight's episode of Married At First Sight was certainly one to watch.

Last week, we watched as all the couples made the decision to stay in the experiment. But as the episodes have gone by this week, we have seen many reasons why some couples simply... shouldn't have.

As for tonight's episode of MAFS, the couples gathered for their second dinner party this season.

In a drama-filled episode, we watched as Holly was targeted by the other contestants after walking into the dinner party alone. Oh, and the ringleader in this operation? Well, it was... Olivia. Weird, right?

But that's just the beginning of what went down.

So without further ado, let's debrief on tonight's episode through tweets, memes and reactions:

The couples tonight before leaving for the dinner party #MAFSAU pic.twitter.com/1XmDWsieBs

MAFS seriously pisses me off with all its BS.
But why am I so interested 💩 #MAFSAU

Al oh I do like your excitement, don’t lose it!! #MAFSAU pic.twitter.com/hQBNR3M6q7

ANDREW HAVING ONLY SEEN BOSS BABY: you're giving off boss baby vibes in a bad way #mafsau

I think Andrew will go into the dinner party and tell everyone she used the word “shan’t”. No wonder they turn on her. #MAFSAU

Producer: hey holly Jesus put on your lipstick REALLY slowly…nah…definitely doesn’t make you look like a serial killer AT ALL! #mafs #mafsau

Sam rejects the poor bastards kiss attempts twice and then cries coz he doesn’t try to kiss her #MAFS #mafsau pic.twitter.com/rdqQlc8DtJ

Brents enunciation is amazing. He even sounds so polite during an argument and saying “shut up” #mafsau

brent: you keep making me feel upset
tamara: you're always in such a bad mood #mafsau

“Loving the energy”. Until holly walks in with her sage #mafs #mafsau pic.twitter.com/cUZ48HzByT

Dom wins points for apologising, which she immediately loses by gossiping. #MAFS #MAFSAU

Anthony better fn stick up for Holly tonight, after what he heard Andrew said to her 😡 #MAFSAU

So much for girls sticking with girls…. #mafsau #mafs pic.twitter.com/Kj1e99ws5J

Feel sick at how the group is jumping to his defence. Are you actually joking? #MAFSAU

THIS COULD BE DOMENICA’S REDEMPTION FOR ME! IF SHE STANDA UP FOR HOLLY I WILL BE ON HER TEAM ALL SEASON #MAFSAU