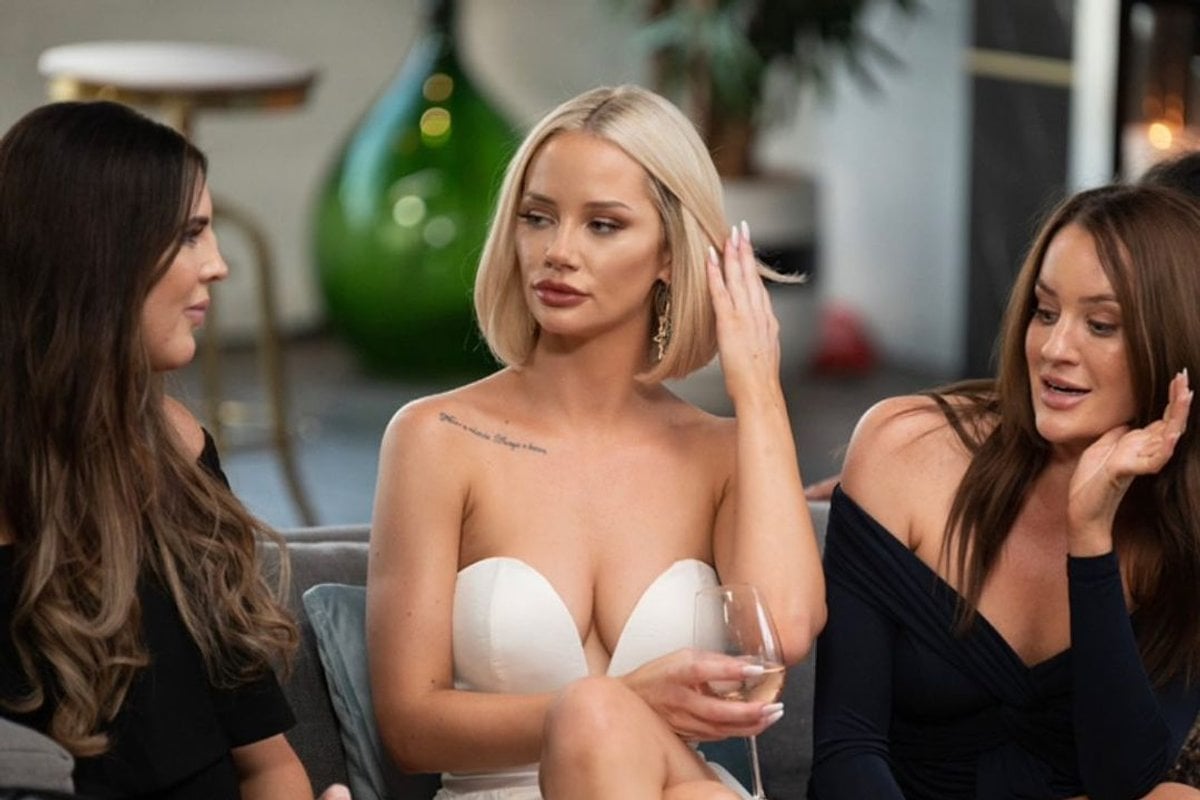 1. Just when we thought they were mates again, Jessika roasted Martha live on TV.

Jessika Power appeared on the Today Show this morning following the chaos that was part one of the Married At First Sight reunion, and dragged an unexpected few co-stars.

When asked about the infamous wine-throwing incident, she confirmed that she "can still smell the sav blanc on (her) hair".

“What they didn’t show is that I tried to walk away five times, and five times I remained calm and collected and held my composure," she said of Cyrell's continued confrontations.

"But she just wanted that bite and that’s why I got the wine in my face, because she couldn’t keep her composure."

What shocked audiences though, was Jess' sneaky comment on Martha's job title, particularly after their feud was resolved in Sunday's episode. 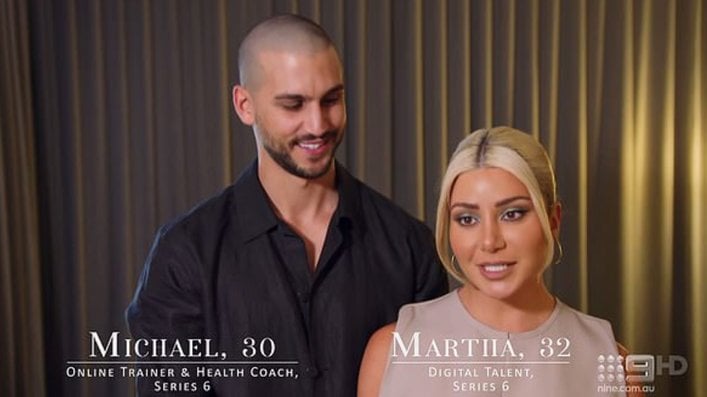 “Look, I think there’s only so many ways you can say influencer," she said of Martha's "Digital Talent" title.

Instagram star, Jadé Tuncdoruk announced her engagement to boyfriend, Lachie Brycki over the weekend and oh my, the pictures are everything.

The 25-year-old influencer shared the story of their proposal alongside a sweet video of her fiance getting down on one knee yesterday afternoon.

"Lach and I do this thing where we ask the other to ‘tell me 5 things you love about me’. Today, Lach randomly started telling me 5 things he loves about me which was unexpected but of course, completely welcome," she started.

We also got a gorgeous close-up of the very shiny ring:

They are such a dream team.

3. It seems that Sam Frost is back with her on-again-off-again boyfriend.

It looks like Bachie star Sam Frost may have just confirmed she's back with her ex boyfriend Dave Bashford. And we don't know about you, but the Instagram posts are pretty convincing.

Over the weekend, the Home and Away actress shared a photo of herself on her Instagram stories with the caption, "Date Night".

Not long after, Sam shared a photo of Dave out at dinner with a new hairstyle. 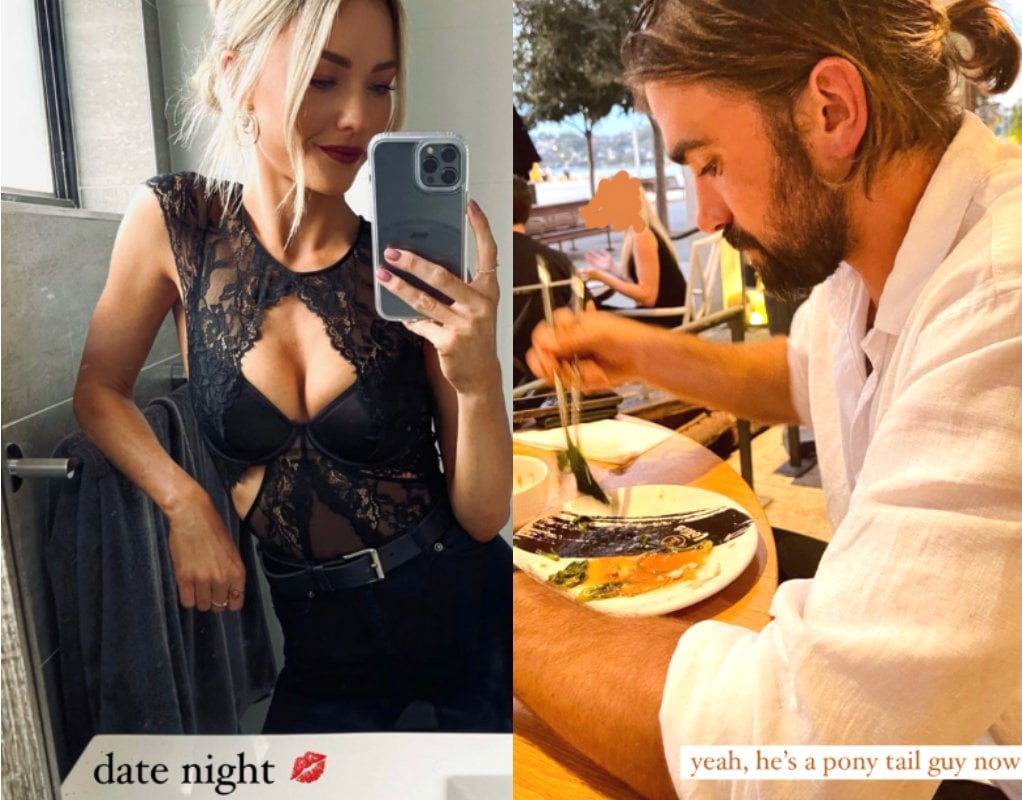 At this stage neither of the pair have confirmed they're back together, but it's not the first time Dave has popped up in Sam's Instagram stories.

During the holidays, Sam shared a video of her and her ex playing rock paper scissors (a classic game of love) before jumping into the water.

"Rock, paper, scissors. Loser jumps in," she captioned the video. 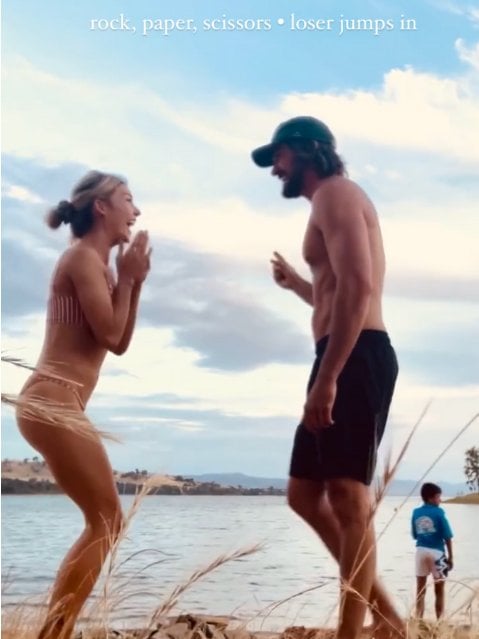 The couple began dating in July 2017, but break up rumours started swirling around when Sam shared a TikTok video last year with the hashtag "31singleandfabulous".

A representative for Sam later confirmed the news, telling Sydney Confidential that "Sam Frost and Dave Bashford are no longer in a relationship. They remain great mates".

4. Aaaand, because MAFS is well and truly all we can think about: A new trailer just dropped for the new season starting next week.

The MAFS reunion kicked off last night and we're honestly still recovering from it.

But in between the wine throwing and all the ~drama~, Channel Nine teased us with a new trailer for the show's upcoming eighth season. And it looks like we're in for another wild ride.

In the trailer, we get to meet sexologist Alessandra Rampolla, who's replacing former expert Trisha Stratford.

Right off the bat, it looks like Alessandra has some interesting new ideas for the contestants. In one clip, she's even shown asking a couple to cup eachother's... genitals.

The trailer also features some interesting one liners like, "you smell delicious", "holy moly guacamole" and "you've got the personality of a door mat... and that's an insult to door mats".

You can check out the full trailer below.

5. Abbie Chatfield's I'm A Celebrity win teaches us a valuable lesson in the power of reality TV editing.

A beaming Abbie Chatfield is spending her day speaking to journalists, radio presenters and TV hosts around the country after she was crowned the winner of I'm A Celebrity Get Me Out Of Here on Sunday night.

Seven finalists were whittled down to two during the grand finale, with the 2019 Bachelor runner-up crowned Queen of the Jungle over TV and radio's Grant Denyer, winning her $100,000 for her chosen charity Dementia Australia.

"Crying in the toilets while writing this. I am so eternally grateful to everyone who voted for me and has supported me," she wrote after accepting her crown.

Watch: Abbie being crowned winner of the jungle. Post continues after video.

To her fans, this is the 25-year-old's redemption story. But it's become obvious in the past 24 hours that to large sections of the media and the public, this is just another opportunity to spew hatred and dislike at a confident woman who isn't afraid to tell us who she is.

A quick glance at the social media commentary from viewers, and while there's plenty of Abbie well-wishers who are ecstatic with her win, there's just as many people telling her that she "rigged the vote by encouraging her fans to vote", or that she is "gross", "bogan", and "vile".

On her winner's post on Instagram, Abbie had to take time out of her celebrations to write: "Any negative comments are getting straight up deleted. Not letting you ruin this for me."

All because she dared to win a reality TV show voted for by the Australian public.