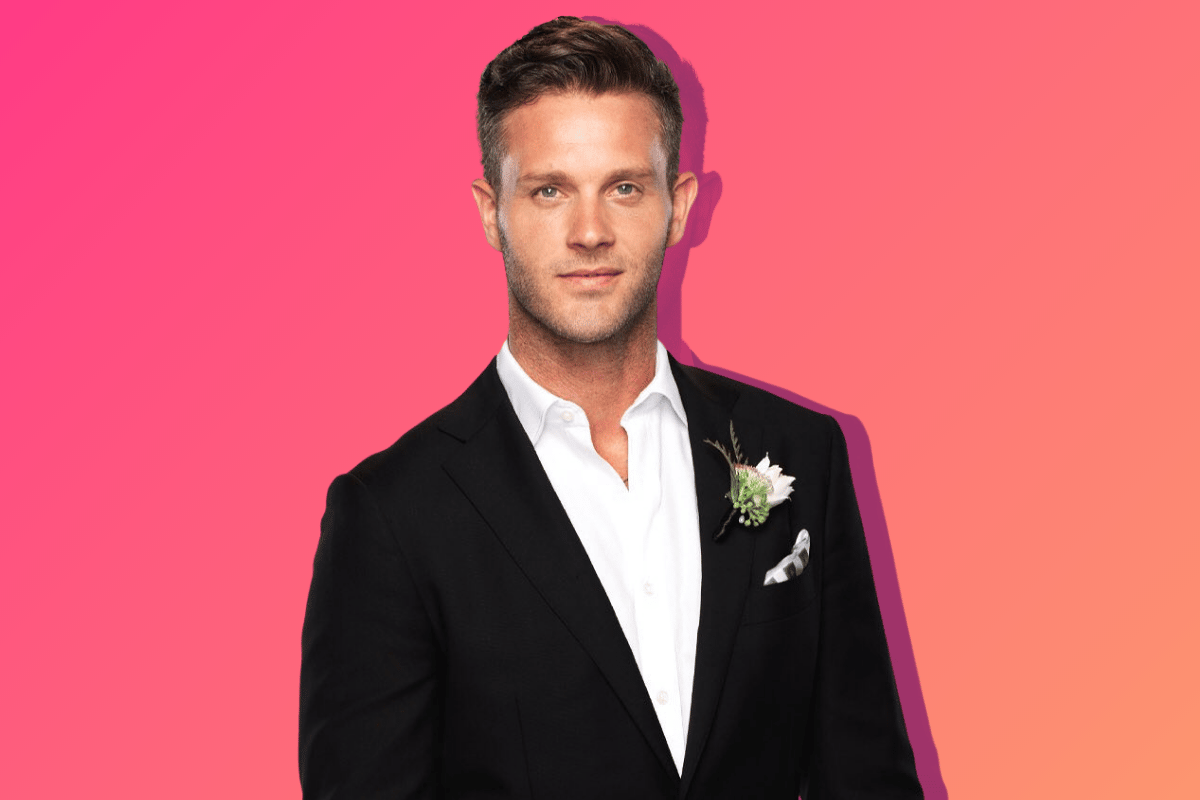 1. So, one of the new MAFS grooms cheated on his IRL fiancée just before their wedding day.

MAFS hasn't even started yet, but it looks like one of the contestants has already been embroiled in a cheating scandal.

In a recent episode on the So Dramatic! podcast, host Megan Pustetto spilled all the tea about former AFL player Jake Edwards, who allegedly cheated on his fiancée six weeks before their wedding.

According to Jake's MAFS bio, he was "previously engaged" and "ended the relationship when he realised he didn’t love her anymore". But a friend of his ex fiancée, Paige, said she actually ended things after she discovered he had been cheating on her for three months.

A friend of Paige's friend told Pustetto that "Jake had been cheating on Paige for over three months and at the same time acting like everything was fine, telling her that he loved her and that he can't wait to make her his wife".

"Paige found messages to other women on his phone just six weeks before they were due to walk down the aisle. She kicked him out immediately."

The friend also said that Paige only found out that Jake was going on the show when the rest of Australia did.

"Who could possibly get ready for a wedding when he [Jake Edwards] was supposed to be marrying the love of his life nine months prior?? It’s just selfish. Paige is devastated. I can’t believe he would go on a show so quickly after what he did to her," they explained.

"And it’s going to bring up a lot of hurt and past trauma for her to see the man that she was supposed to be marrying, marrying someone else, and on national television."

Pustetto also shared a number of Instagram stories on the So Dramatic! Instagram page which don't exactly paint Jake in the best light.

"The lies have started… get ready for all the bullshit that comes from his mouth everyone," one of the captions reads.

We'll have to wait and see if any more tea spills when Married At First Sight airs on February 22 on Channel Nine.

Listen to The Spill, Mamamia's daily entertainment podcast. In this episode, co-hosts Kee Reece and Laura Brodnik chat about Machine Gun Kelly who decided that Valentine’s Day was the perfect moment to let the world know he wears Megan Fox's blood around his neck. Post continues below.

Model Erin Holland tied the knot with her partner in Byron Bay over the weekend. And her dress looks straight out of a fairytale.

The 31-year-old wore a gorgeous white lace J'Aton Couture gown when she exchanged vows with her longtime partner and Australian cricketer Ben Cutting on Saturday.

The dress was made using a French lace from a 100-year-old tablecloth and featured a fitted lace bodice, high neck, short sleeves and a detachable train, which measured in at over two-and-a-half metres.

Erin also wore a long tulle veil, which she took off at the end of the ceremony.

Altogether the dress took a whopping 3,000 hours to complete. And it's not hard to see why.

"Lace was a key aspect to the dress with lots of intricate details such as pearl beading in the bodice and Erin and Ben's initials on the shoulder of the dress."

You can check out all the photos of the gorgeous dress below, plus one of the other two other J'Aton Couture dresses Erin wore during the two-day celebration.

3. Apparently Cara Delevingne and Jaden Smith had a Valentine’s Day date, so now everyone thinks they’re officially a thing.

Over the weekend, supermodel and actress Cara Delevingne went on a Valentine's Day date with her Life in a Year co-star Jaden Smith.

The 28-year-old was spotted meeting the 22-year-old son of Will and Jada Pinkett Smith at a Los Angeles restaurant, where he gave her a gigantic bunch of roses.

However, neither actor nor their reps have confirmed that they are dating.

While the two have been friends for a few years now, they recently became closer when playing an on-screen couple in the new Amazon Prime drama, Life in a Year. You can watch it for yourself and determine if there's any romantic chemistry...

4. Priyanka Chopra says she got actual wedding day neck cramp from her 75 foot long veil, and we’re really not surprised.

In 2018, Priyanka Chopra married Nick Jonas in a lavish Hindu and Christian wedding.

At her Christian wedding, Chopra wore a dazzling hand-beaded and hand-embroidered dress by Ralph Lauren, which included 135 satin-covered buttons, 2.4 million mother-of-pearl sequins and a 75 foot veil.

But while it looked beautiful, Chopra has noted how heavy the veil was.

Appearing on the Kyle and Jackie O show this week, Chopra told Jackie that after wearing it during the ceremony, she got a neck cramp.

"I still had a cramp on my neck from that one (dress) that evening," she said.

We are not even slightly surprised.

5. A fake pregnant belly and 'contractions': Why everyone’s talking about James Charles.

It's been a confusing week for James Charles' Instagram followers.

Over the weekend, the beauty influencer sparked a social media frenzy after sharing a photo of his newly shaved head.

"Just wait until you guys see what I did with my hair," the YouTube star teased on his Instagram Stories.

Later that night, the 21-year-old was photographed entering a Los Angeles restaurant.

"Did you shave your head?" videographer Kevin Wong asked.

And then, there was this:

Okay, that's a lot to take in.

What did James Charles do?

In the 15 minute video, the beauty influencer explained that his friend, fellow influencer Laura Mellado, had challenged him to live like a pregnant woman for a day.

"HI SISTERS! In today's video, I'm trying something I'll never get to experience, being pregnant! My best friend Laura is pregnant with her second baby so she challenged me to be pregnant for 24 hours to see if I was strong enough to go through what she does!" Charles captioned the video.

For more on why everyone’s talking about James Charles, read our earlier post here.