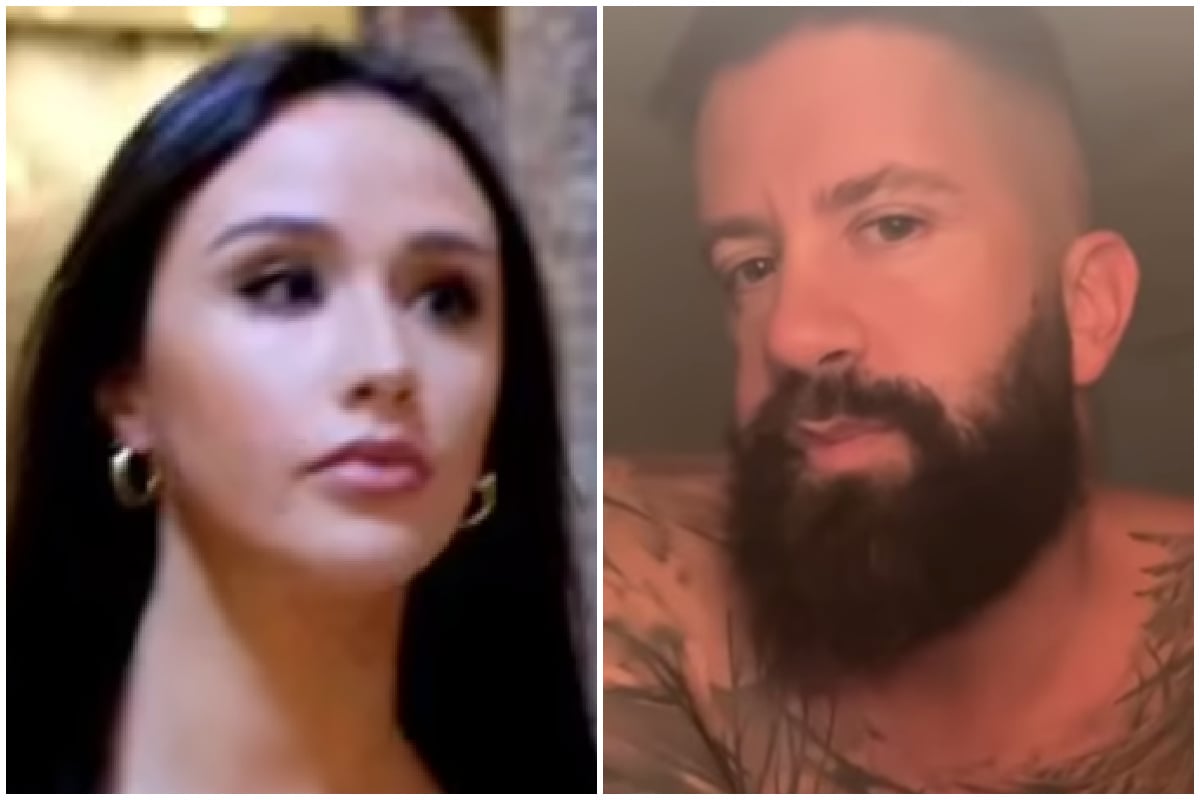 Trigger warning: This article discusses homophobic and misogynistic abuse, as well as self harm. For crisis support, you can contact Lifeline via their website, or call Lifeline on 13 11 14.

It's a Wednesday night in February, 2020, and we're approaching the pointy end of Married at First Sight, season 7.

Just before 9pm, more than one million Australians watch as truck driver David Cannon takes his experimental wife's toothbrush and sticks it down the toilet, contaminating it with faeces.

His partner - Hayley Vernon - has cheated on him, so David decides not only to execute an entirely disproportionate act of revenge, but also to film it and circulate the video.

As it airs, the other contestants, as well as the show's experts, recoil in horror. Relationship specialist John Aiken remarks, "that's really crossing a boundary," while dating and relationship expert Mel Schilling says very little, shaking her head in shock. 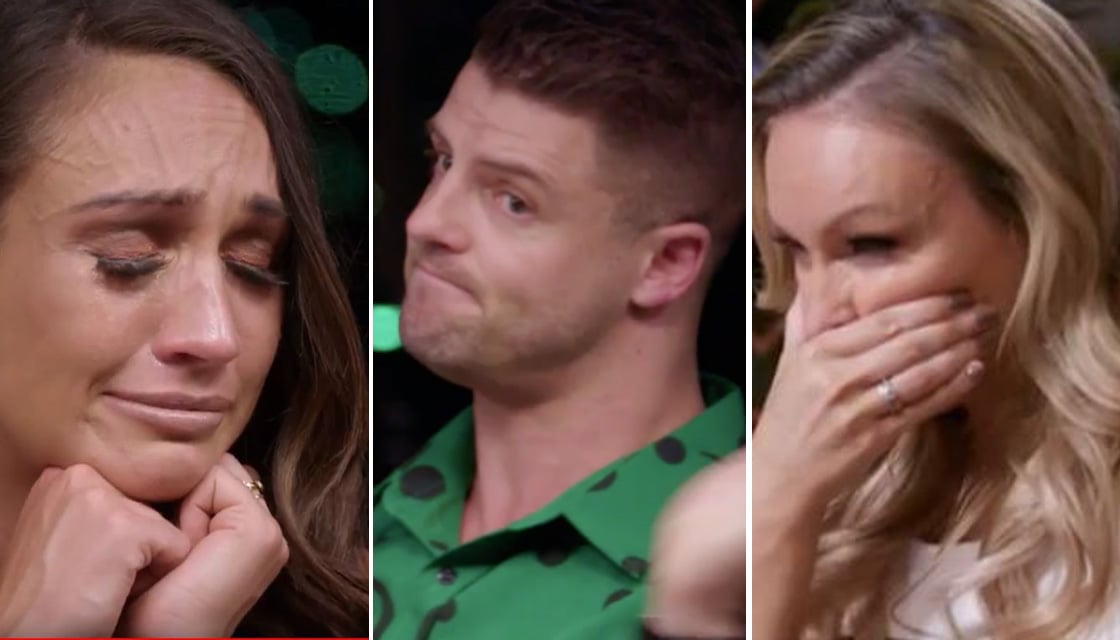 The moment acts as a lightning rod for conversation around Australia. Does David's behaviour constitute a form of abuse? Is it just a terrible practical joke? Is this how people actually behave?

But it also pushes the boundaries for a show that, a few seasons earlier, had famously featured a groom who described his bride as "not what I ordered".

In terms of ratings, Married at First Sight is the gold standard of reality television in Australia. Other franchises - even those that pre-date the outlandish 'social experiment' - can't compete. Why watch someone date 20 strangers to try to find love, when you could watch 10 people marry 10 strangers and fall apart in the process?

The problem is, moments like the toothbrush scandal set a precedent. And if you can't top it next season, what's the point?

That's where a man named Simon Blackburn comes in.

On Tuesday, The Wash published a story claiming Married at First Sight 2022 groom Simon Blackburn had been axed from the show, after producers became aware of homophobic, sexist and misogynistic videos he had publicly shared on social media.

In one video posted to TikTok, the FIFO miner said: "If you are gay, you are gonna get AIDS. It's just disgusting. It's like filth, it's actually filth. That sexual orientation is f**king filth."

Blackburn had already been the subject of negative attention earlier this year, after former Bachelorette Angie Kent called out his videos and his followers who appear to find them funny.

"This is the same man I was posting about not long ago who petrified me on TikTok and Instagram with his content," she wrote on Instagram this week.

"He also came for me when I called him out. He has an odd cult following of young men who think his behaviour is something to laugh about and look up to." 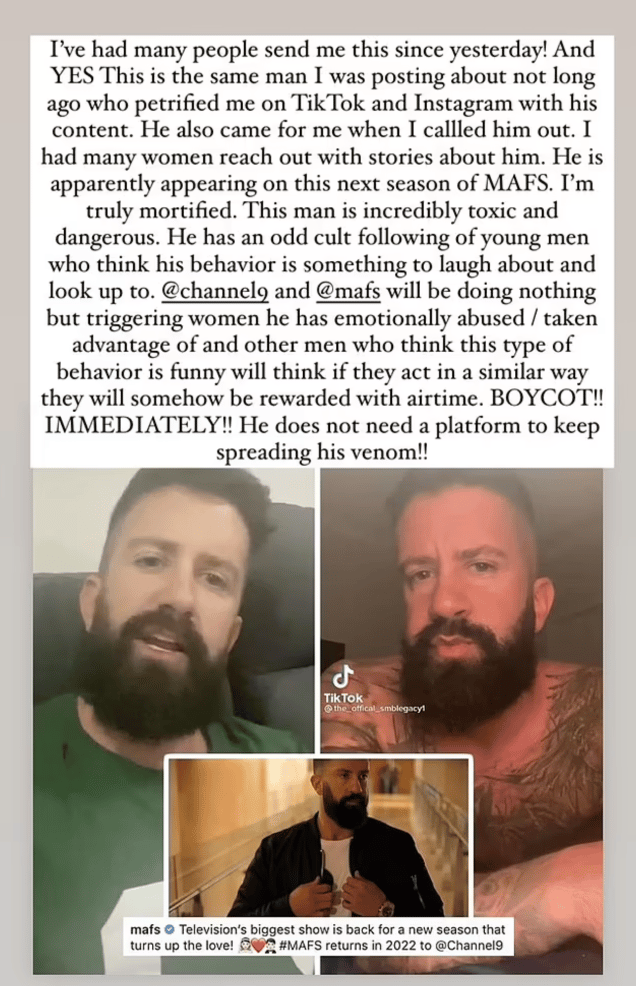 A Nine spokesperson told Daily Mail Australia Blackburn has since been edited out of the show, after they discovered his videos.

"When unacceptable social media content was discovered in relation to Simon Blackburn we immediately took steps to remove him from the program," a representative said.

According to Daily Mail Australia, it was Blackburn's MAFS wife - Melbourne-based florist Jessica Seracino - who ultimately alerted the show to her partner's online behaviour. Sources say Seracino noticed 'red flags' within 24 hours of her wedding, so asked her friends to look into him. They found disturbing videos and tweets, that were reportedly a surprise to producers.

Sources say Blackburn was immediately asked to leave, and Seracino was sent to a hotel until she was matched with another groom.

Blackburn has since posted on his Instagram, saying: "To clarify, I haven’t posted on TikTok in six months and all videos of me are reposts or screenshots of lives from last year! Not my current thoughts or mindset!"

"No further comment will be given! I’ve got COVID, let me rest!"

The question, of course, is: how did Nine not know that one of their selected contestants had posted wildly inappropriate videos on his social media platforms?

Even if Nine hadn't come across Blackburn's social media (which seems unlikely for a major reality show in 2021), surely the casting process went some way towards revealing his disturbing attitudes.

Married at First Sight would have us believe the men and women who participate are matched on the basis of their values, delineated via hours of personality testing and psychological interviews. Yet a man who denigrates women on his social media - whose language is sexually demeaning, objectifying, and outright cruel towards his ex-wife - was somehow deemed fit to pair with a woman who had no idea what she was getting into.

Watch: Sam tells Coco he "needs a girl with boobs" on the last season of Married at First Sight. Post continues after video.

It's hard to believe Blackburn presented to producers as an upstanding, respectful member of the community, and surely that was precisely the point. People like Blackburn bring ratings. They stir controversy. Their 'unearthed' social media posts dominate headlines. Their behaviour is fodder for conversation online and in real life.

But at what cost?

Season 2 contestant Clare Verrall has been open about her experience on the show, where she was matched with that very man who uttered "she isn't what I ordered".

"I had PTSD after being attacked by a random man on the street 6 months before I went on the show," she told Mamamia.

"They matched me with a guy who had been arrested for assault which they knew about."

Verrall says he was aggressive towards her and the production crew.

"I was offered no mental health after-care after my experience and ended up getting into such a dark place that I made an attempt on my life," she said.

"I still get triggered by MAFS."

There's entertainment, and then there's putting women at risk. For both Verrall and Seracino, the very nature of the show they signed up for dictated that they didn't know who they would be matched with. But surely it's Nine's duty of care to ensure they don't create couples where there's potential for harm?

Blackburn's social media pages alone are enough to cause distress to a person who finds themselves suddenly married to him.

In casting Blackburn, with or without explicit knowledge of his social media content, Married at First Sight crossed a line. Where previously they had been able to suggest it was the nature of the experiment - and not strategic casting - that was responsible for the on screen drama, with those videos, everything changed.

Blackburn's attitudes towards women were clear - but they'd selected him and paired him with a woman anyway.

That's the problem with navigating the fine line between what will drive ratings and what is ethically defensible.

Sometimes you step over it.

Mamamia reached out to Nine for comment on this story. The article will be updated once a statement is provided.

Reply
Upvote
2 upvotes
I was very shocked at how he felt about his children. Whinging that he only had to have them one weekend a fortnight, as if they were a burden or obligation. And how he didn’t want to take them so his ex could go out. They are your children ffs. It’s bad how he treats women but at least they are adults. But treating children like some kind of weapon in your relationship breakup is the lowest of the low.
News
General
Opinion
True Crime
Politics
Sport
Explainer
Entertainment
Celebrity
Reality TV
Movies
TV
Books
Rogue
Royal
Lifestyle
Beauty
Fashion
Weddings
Home
Wellness
Health
Fitness
Travel
Food
Parents
Before The Bump
Pregnancy
Baby
Kids
Teens
School
Parent Opinion
Work & Money
Money
Finance
Career
Lady Startup
Relationships
Sex
Dating
Separation
Friendship
Family
Real Life
Couples