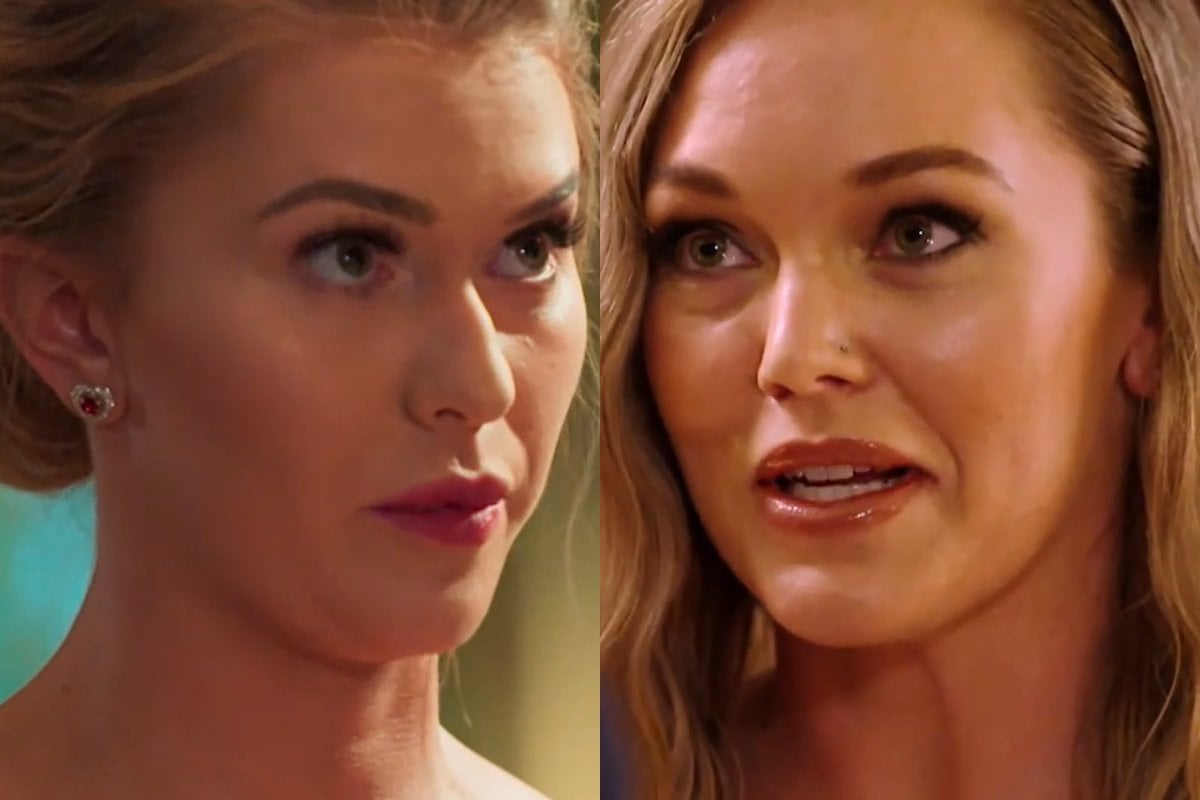 Last night, we heard the MAFS vows we've been desperate to hear.

The problem is, they were from the wrong bride.

During their final vows, Georgia told Liam exactly how he made her feel at the final dinner party. While participating in the honesty box challenge, Liam told Georgia his friends and family would never accept her.

He was quite blunt in his delivery. Bordering on cruel.

During her vows, Georgia addressed this unexpected change in Liam's treatment of her.

"At the Dinner Party, without warning, you turned on me. You humiliated me and degraded me in front of everyone. It was clear how humiliated I was, and yet you chose to abandon me that night when I needed you the most," she began.

"You gaslighted me, you manipulated the blame, and you tried to put your insecurities onto me. I know who I am and what I stand for, and I will not accept that behaviour, now or ever."

Georgia told Liam she understood why he did it, that she believed he felt he didn't deserve love so he pushed people away, and then she told him she was willing to give him another chance.

Liam didn't take up that offer. He said they should just call it quits, and he walked away.

It was the end of their relationship but at least Georgia left the show knowing where she stands.

She demanded to be treated better and quickly found out Liam wasn't prepared to rise to that challenge.

Melissa left the show without that reassurance.

During her own vows, Melissa lightly touched on Bryce's behaviour during the season and how that made her feel.

"I have written and rewritten these vows, trying to be as sensitive as I always am. But I need to be completely and brutally honest with you," she began.

"The rumour of someone waiting outside of the experiment for you has plagued our relationship, and with accusations by not one but two people, I had to question what was true. It was nothing short of devastating.

"But despite the rumour, the conflict and everyone's opinion, I know deep down in my heart that I have never felt this way. I can absolutely say with certainty that I am in love with you."

LISTEN: The MAFS happy ending precisely no one wanted. Post continues below.

Melissa didn't challenge Bryce, and the couple walked away from the experiment together.

Imagine another version of events playing out on our TV screens. A version where Melissa called out Bryce's behaviour like Georgia did Liam's.

It would have been interesting to see how Bryce reacted if Melissa had been as direct in her vows. If Melissa had called out Bryce's history of gaslighting and manipulating her. If Melissa had told Bryce she would not accept that behaviour, now or ever.

Maybe Bryce would have risen to the challenge. Maybe in this version of events, Bryce would have reflected on his behaviour, and his treatment of Melissa and the other women in the experiment, and committed to changing it.

Most likely, just like Liam, Bryce would have been shocked to discover Melissa was no longer putting up with his bullsh*t.

He would have stormed off, walked away, blamed everyone else for his problems.

He would have called it quits.

And Melissa may have gotten the fairytale ending many of us believe she really deserves.

Everything that has happened since the MAFS final vows were filmed.

On Monday night, thousands of Australians were asking the same question. Here's why that matters.