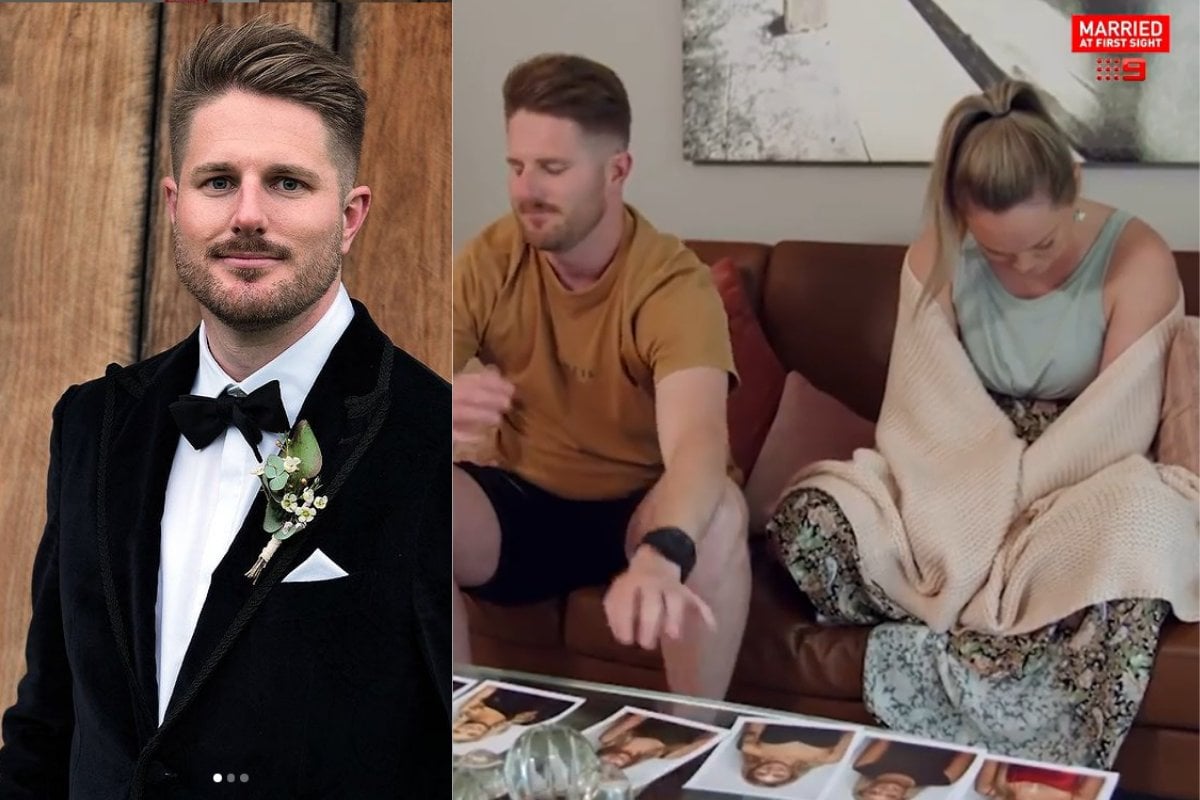 1. MAFS' Bryce has claimed him ranking his wife as the fourth hottest was a "stitch up".

In case you missed it, last night, MAFS experts decided to throw a spanner in the relationships by asking couples to rank their co-stars on who they were most attracted to, and they're not even pretending to help people "find love" at this point, are they?

Arguably the most controversial man of the season, Bryce Ruthven, was in hot water after we watched him rank his wife, Melissa Rawson fourth, explaining that the other girls were more his type.

But today, he has come out claiming he was "stitched up" by the producers.

We know what you're thinking. Bad editing? Leading questions?

Nope. He claims they told him to rank the girls based on looks, and that just doesn't clear much up for us?

On B105’s Stav, Abby and Matt show this morning, he explained that the boys were being asked different questions depending on the edit. Some were asked to base it on personality, and the others on physical appearance.

"Unfortunately, they were stitching some people up," he said.

But you... You still did rank her fourth?

Listen to Mamamia's daily entertainment podcast, The Spill, where hosts Laura and Kee discuss the lowest point of MAFS so far. Post continues below.

2. Why the Honey Badger has now blocked Brooke Blurton on Instagram.

Brooke Blurton has opened up about her relationship with her ex-Bachelor, Nick Cummins this week, and it's safe to say they're... not on speaking terms.

On fellow Bachelor alum, Abbie Chatfield's podcast this week, Blurton explained that her ex blocked her recently after she commented on a picture of his from January 26 this year.

"My friend wrote on his Australia Day post being like: 'Aren't you glad you dodged that bullet?' and then I wrote back: '#oath'," she said.

Brooke Blurton is a Noongar/Yamatji woman, and was of course taking a dig at Badger for celebrating January 26, despite it being a day of mourning for Aboriginal people around Australia.

And instead of engaging in any conversation, Cummins blocked her on the spot.

3. SPOILER: Samantha basically just confirmed live on radio that Cameron cheats on her in MAFS.

In case we needed more evidence of a MAFS cheating scandal, Samantha Harvey just hinted that her husband Cameron Dunne does actually cheat on her. Well... sort of.

The 31-year-old addressed the cheating rumours this week during an interview on Hit Hobart 100.9 with Jimmy & Nath. But she was careful not to give away too much information.

When asked if Cameron cheats on her during the show, Samantha replied: "Look, you guys are going to have to watch and see it all play out."

"This whole moral thing that is coming up now will be raised again later in the show… you guys are going to have to watch to find out because that’s a massive spoiler and I’m not going there," she added.

The hosts then asked if she was going to be involved in drama this season.

"Yeah… I literally… I promised my mum and dad I’d go on the show and wouldn’t be in any drama. That I’d be the quiet little mouse at the end of the table, but… [laughs]."

A trailer for tonight's episode also shows Cameron telling fellow contestant Coco Stedman that he would've been "happy to be matched with you".

Here's hoping we get to find out more when Married At First Sight continues tonight at 7:30pm on Channel Nine.

John Mayer hasn't exactly had the best start on TikTok.

The singer, who previously dated Taylor Swift, posted his first video on TikTok this week where he tried to figure out how to use the app.

But instead of answers, Mayer was met with the wrath of Taylor Swift fans who immediately trolled him.

"Taylor would know how to flip the camera," one comment read.

"We will never forget what you did to our girl Taylor," said another.

"Sis you chose the wrong app to join," joked another.

Others resorted to just straight up quoting Swift's song 'Dear John', which is believed to have been written about the singer.

"You are an expert at sorry, and keeping the lines blurry. Never impressed by me acing your tests, all the girls that you’ve run dry," many people commented.

Yep, we would not want to be John Mayer right now.

5. There are two sides to the Jonah Hill fat-shaming story and you won't like either of them.

If Jonah Hill's career was a vinyl record, each side would play a very different type of music.

The A side would be the greatest hits of his career, from a break-out role in the iconic comedy Superbad to starring roles in Get Him to the Greek and 21 Jump Street. All the way to more dramatic fare such as Moneyball and The Wolf of Wall Street, both of which earned him Academy Award nominations. 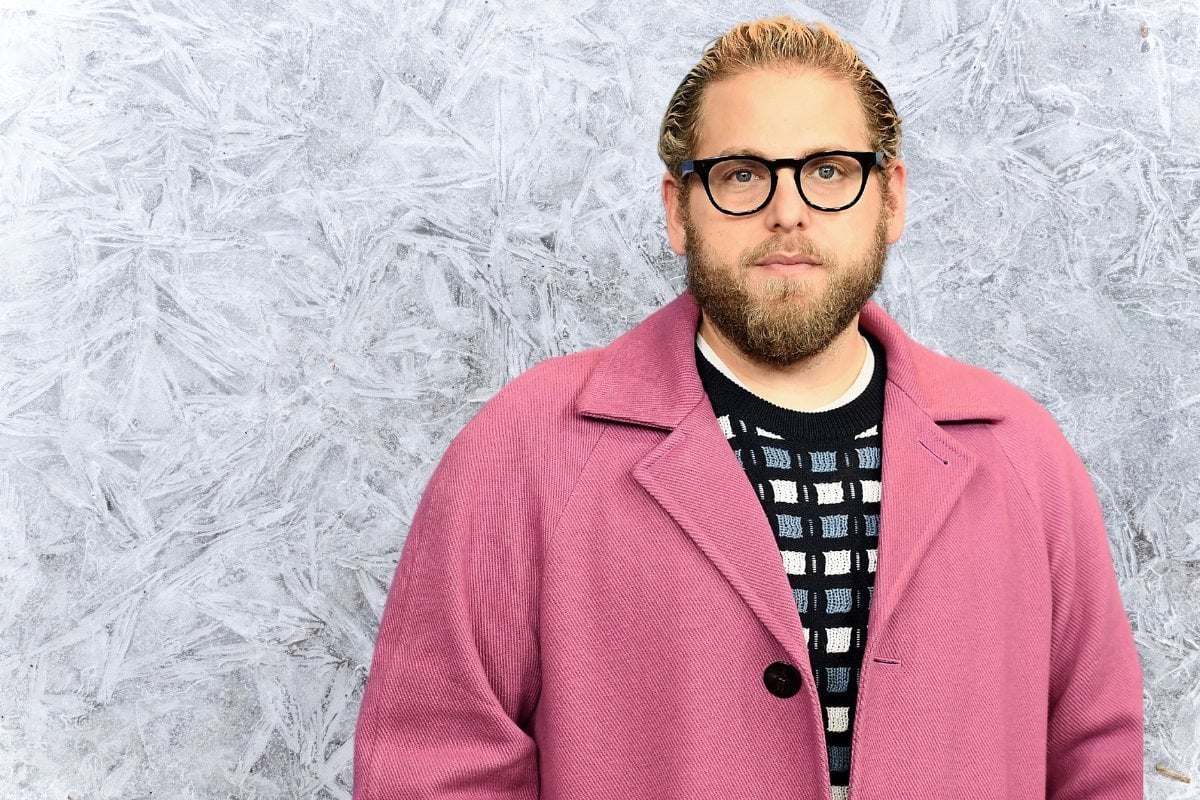 The B side, on the other hand, would offer up a very different tune. One where the actor's body is publicly mocked and shamed over the course of decades. His weight derided and questions around 'what it's like to be the fat guy?' thrown out during his many press tours.

“I became famous in my late teens and then spent most of my young adult life listening to people say that I was fat and gross and unattractive,” The 37-year-old actor once said during an appearance on The Ellen DeGeneres Show, when talking about how his body was described in the world of entertainment and media.

In a now-viral 2014 interview clip, Jonah was asked if he was still considered 'the fat guy' in Hollywood circles, a question he refused to answer.

why the fuck would u even think it's okay to say this i'm so mad pic.twitter.com/je0Wh12Ylv

Just a few years earlier, in 2012, Billy Crystal made a targeted weight joke at Jonah's expense during the Oscars, pointing out the actor in the audience while singing "It's great you shed weight. But I think you should know, there's cupcakes after the show."

Jonah, who was nominated in the Best Supporting Actor category and seated near the stage next to his mother, couldn't hide the broken look on his face as the camera panned to him and the audience laughed at his expense.

This week Jonah made international headlines when he posted a response on his Instagram to shirtless paparazzi photos the Daily Mail published of him, addressing the ridicule that had followed him throughout his career.

"I don’t think I ever took my shirt off in a pool until I was in my mid-30s even in front of family and friends," the actor wrote alongside a screenshot of the outlet's article. "Probably would have happened sooner if my childhood insecurities weren’t exacerbated by years of public mockery about my body by press and interviewers."

"So the idea that the media tries to play me by stalking me while surfing and printing photos like this and it can’t phase me anymore is dope. I’m 37 and finally love and accept myself."

His statement set off a string of headlines centreing on the importance of pushing back against the shaming of male bodies, a dangerous topic that has only been skimmed over lightly in the past.

It was a brave statement for him to make, and one that no doubt will play over in the minds of both boys and men who are facing a similar avalanche of shame around how their bodies are viewed.

You can find the full story here.