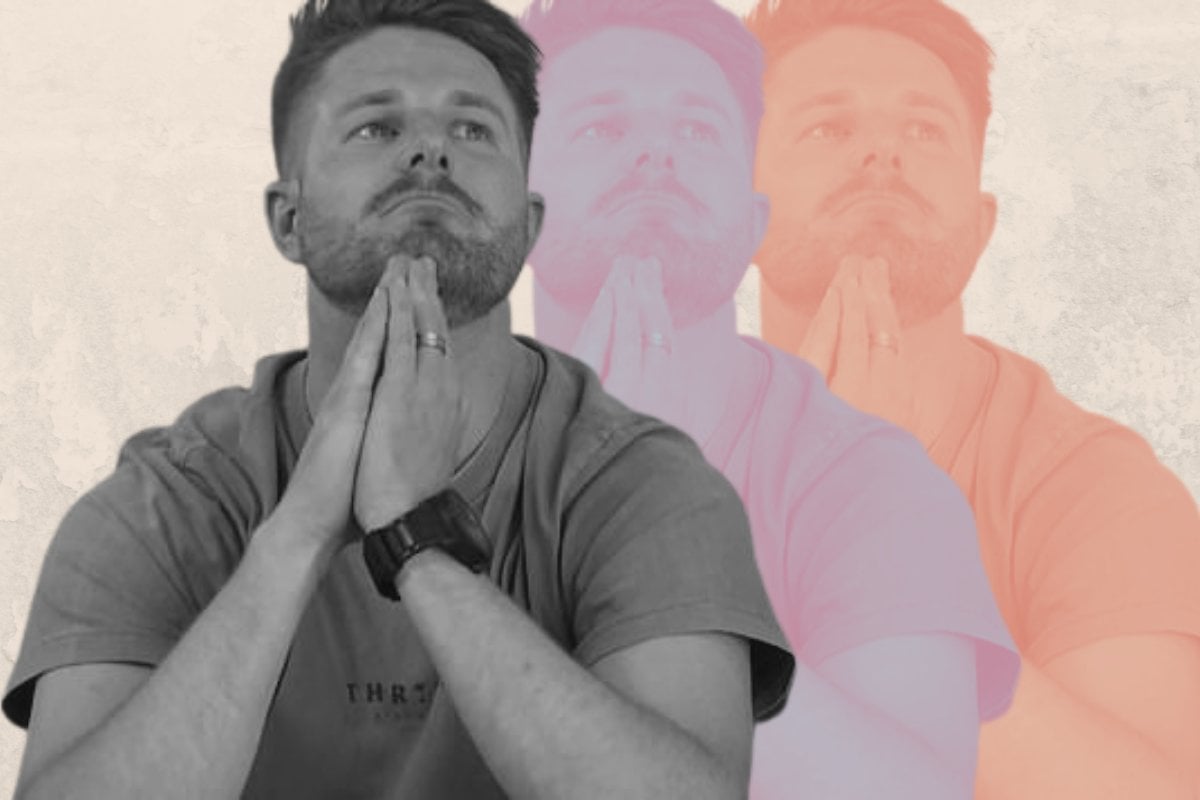 Last night we were served up another platter full of chaotic toxic bulls**t on Married At First Sight.

Bryce Ruthven, who is firmly establishing his position as public enemy number one, decided to throw yet another spanner in the works. He presented his commitment ceremony decision card with the word ‘stay’ emblazoned on it - which would have been perfectly fine if it didn’t have the crossed out word ‘leave’ lurking above.

The moment we're all confused by. Image: Nine.

The choice to take a stand/make a statement/drum up ratings obviously had a controversial trickle down effect to his cast mates - most notably of course being his wife, Melissa.

Stunned into literal silence on the show, we all felt the pain and confusion written all over her face. And for that reason, we want to unpack how the heck Bryce got to the point where he could confidently say that this was the right and proper thing to do.

...This could be a long one, because as we write this we’re finding it incredibly hard to justify any of this mayhem. Even one little bit.

But here we go.

1. The producers interfered, and there are pics to prove it.

If we’re honest with ourselves, we know it’s super naïve of us to think that all decisions and actions on Married At First Sight are made by the contestants themselves, and that producers don’t dabble.

So, while the decision to write ‘leave’ then cross it out and write ‘stay’ underneath does seem very on brand for Bryce - who has held the magnificent ability to disappoint us at every hurdle - based off a few behind-the-scenes snaps, it seems more was at play.

In photographs shared by The Wash, Bryce can be spotted writing out his commitment ceremony card. He doesn’t look perplexed or like he was making an ‘incredibly hard decision’ as he claimed on the couch. Instead, he’s having a right old laugh with the cameraman. Giggling over the hilarity of his wife’s future misery.

Watch the moment Bryce and Melissa get some difficult feedback from their families. Post continues after video.

It is highly possible that Bryce was egged on by production to stir the pot with his leave/stay saga. And while they may have convinced him that it would make him look like he was being honourable defending his wife, you’d think that Bryce (a fully grown human man) would have considered how it would have negatively affected his very vulnerable partner.

A partner who has actively said on national television that the thing she fears most is that he will leave.

And yet what did he write? Leave, of course.

2. The secret ‘slut shaming’ conversation that no one heard.

Despite this series of Married At First Sight dropping four lengthy episodes a week, apparently there wasn’t ‘room’ for a bit of drama between Melissa and Beck to air.

Supposedly during a fiery dinner party there was a confrontation between Rebecca (Beck) Zemek and Melissa Rawson.

According to Bryce, Beck lobbed a "slut-shaming" comment at Melissa that saw her storm back into the party and tell her to "go jump off the Harbour Bridge".

"Rebecca had a fair bit to say," Bryce said in an interview with Fitzy and Wippa. "She’s got a fair bit to say towards Melissa for the first couple of weeks, a little bit of slut-shaming and things like that."

So perhaps this was “bullying” that Bryce was referring to at the commitment ceremony? Tricky to tell seeing as we didn’t witness this alleged “slut shaming” conversation and we’re currently blinded by the blatant “bullying” coming directly from Bryce to his wife, Melissa.

3. Bryce is being intentionally... cruel.

The third and final reason why Bryce may have written ‘leave’ on that pesky commitment ceremony card is because he was being cruel.

This theory has been backed up by the eyeball-owners of Australia who have witnessed Bryce, week after week, sink to a new low. Find a new way to mortify his wife and undermine her feelings. Or blame his wife’s sadness on anybody (literally, anybody) bar himself.

Bryce claimed that he was 'standing up' for Melissa by deciding to leave, and thus removing her from a toxic environment. What this groom has failed to notice is that he is the architect, builder and bloody decorator for the toxic environment his wife has been shoved into.

Listen to The Spill, where hosts Kee and Laura discuss Married At First Sight's most dangerous moment. Post continues after podcast.

Bryce blurted out: "Me writing leave was to get her out of a toxic environment. It was me looking after her best interests, and for once in my life not being selfish."

However, it’s clear on his mission to ‘not be selfish’ he forgot to check the consequences of the person sat right next to him: Melissa.

Knowing that Melissa has aired on national TV that she’s terrified of him wanting to leave, that she has gradually opened up over the course of the season that she fears rejection above all, Bryce decided to make a point and write ‘leave’ regardless.

And it happened moments after Melissa admitted she was falling in love with him.

Patrick accurately pointed out from the couch, “Even if you wrote leave, you're going to be here for another week. I don't get it?”

We don’t get it either. Other than if ‘getting it’ is admitting that Bryce is either a foolish puppet at the hands of production or a toxic partner determined to mess with his wife.

Or perhaps, in a cruel twist of fate, he’s managed to be both.