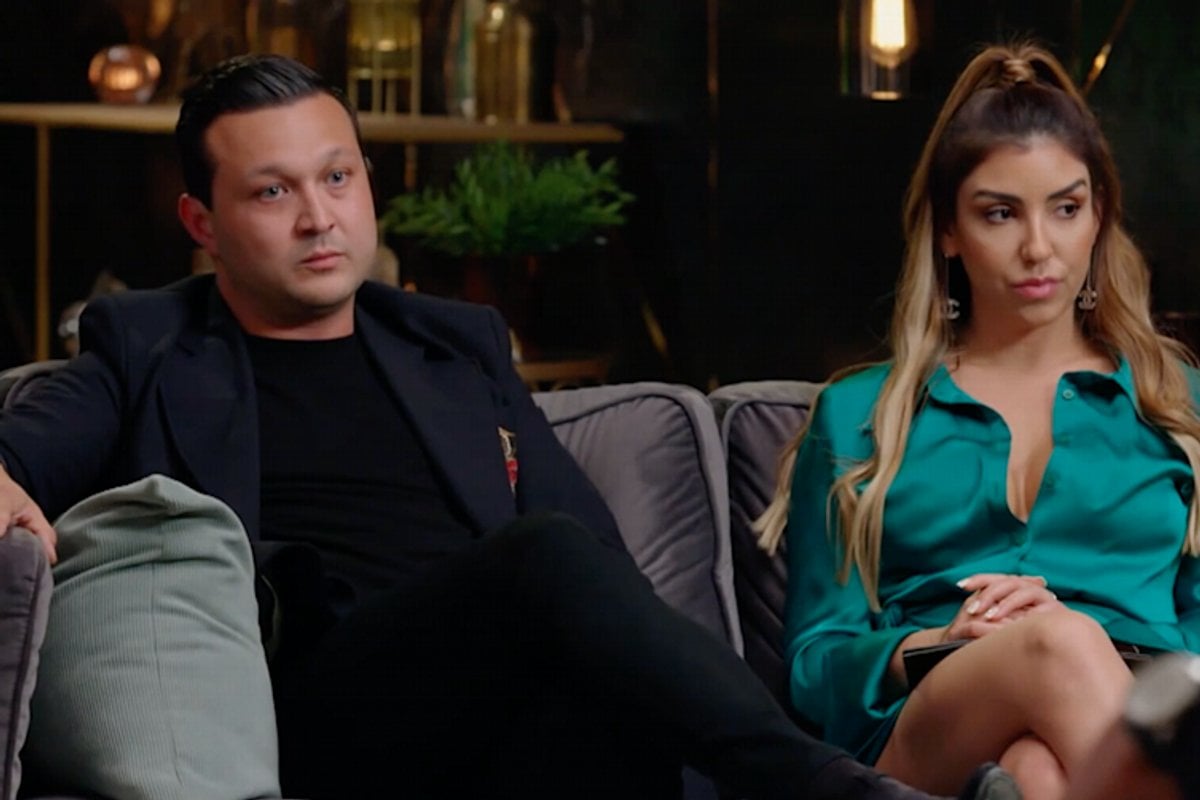 At last night's commitment ceremony, Dion was a broken man.

As one half of an intruder couple, the 34-year-old is fairly new to the instant marriage on TV game. He and his wife Carolina had only been in each other's lives for a few weeks when the commitment ceremony was filmed.

And it hadn't been an easy ride.

From the very first moment they met, Carolina had made her thoughts and feelings about her new husband clear.

He didn't look the way she'd hoped. Dion is shorter, less 'traditionally masculine' and more flamboyant in his fashion choices than the men Carolina was used to dating.

As they got to know each other, Carolina began to point out more 'flaws' in her husband.

Like the fact he doesn't eat breakfast, when she loves a bit of brunch.

Or the fact that she is very committed to a 'healthy lifestyle', and Dion has never set foot in a gym.

Or the fact that Dion doesn't have a traumatic past, which makes it difficult for them to bond, apparently.

As Carolina's distaste for her husband grew, and as her insults became more and more ridiculous, the other contestants became concerned for Dion.

They stood up for him at the dinner parties and the commitment ceremonies. They told Carolina to give it some more time. That every couple faced their own set of issues at the beginning of their relationship.

All the while, Dion remained calm and considerate. He didn't bite back at Carolina. He stayed respectful and kept trying to make a connection with her.

And when they arrived at the commitment ceremony this week, Dion was cautiously optimistic. He thought maybe things weren't as bad as they seemed. Maybe there was a way for the two most mismatched contestants in MAFS history to make this thing work.

When asked about their week, Dion told the experts things went from "bad to worse" and on the whole the experience was "hurtful".

He then said they did have one happy moment. A moment where they danced and laughed together.

Dion, understandably confused, then asked: "But you were laughing and having a good time, weren't you?"

To which Carolina replied: "I was definitely laughing at your dancing."

The experts gave Carolina a reality check. They told her she was being cruel and nasty. That her complaints about Dion were very superficial.

They told her there were no excuses for the way she was behaving and the way she had been treating Dion.

When it came to decision time, Carolina explained she had chosen to leave. You know, because she hates her short husband and his terrible dancing.

Dion then asked to change his 'stay' to 'leave' but the experts wouldn't let him. They said Dion and Carolina needed to use the week to see whether they can repair things between them.

It was at this point the show became particularly cruel.

There's no denying that MAFS is ratings gold. Season after season, the producers mismatch contestants to hilarious results. Matching a man with a foot phobia with a woman who will tell him all about her funny-looking toe? Magic.

They know how to push the contestants' buttons, how to bring out their most vulnerable sides, and how to make a drama-filled show with just a splash of romance, which keeps people coming back for more.

They know how to perfectly set up the tension between the contestants so that the drama escalates throughout the week and explodes at the dinner parties and the commitment ceremonies.

They know how to pit contestants against each other. How to bring out the worst in them for ratings.

But usually it's a bit more of a fair fight.

Perhaps it's obvious from the start that a contestant is in it for the Instagram followers and they're okay with taking a bit of a beating to get them.

Most of them can give it as good as they get it.

And usually there's at a little spark or the beginnings of a friendship between the contestants at some point throughout their 'journey'.

None of this is true with Dion though.

He just seems like a nice enough bloke in a rhinestone jacket who was paired with someone who was never going to like him.

A decision that was made with ratings and opinion pieces like this one in mind.

Dion is a nice guy, who has been beaten down so much in his few weeks in the experiment, that he was willing to give his wife another chance. Even after she complained about his looks, his health and his inability to understand that breakfast is the most important meal of the day.

But last night it became glaringly obvious that Dion was in a toxic situation and he desperately wanted to get out of it.

The experts had the opportunity to step in and end it there.

To release Dion from this strange purgatory where the woman he is paired with hates his nifty outfits and his choice of main meals.

To allow Dion to leave the show with the tiny bit of self-esteem he has been able to salvage, and to allow Carolina to head to her favourite brunch spot to find a more suitable husband.

But they chose to prolong Dion's suffering. All for another week of ratings.

Reply
Upvote
The fact that they both have to stay even if one writes "leave" is just disgusting. These are not real relationships, they don't need to stick around and try to work things out. (And frankly, in some real relationships, you don't need to do that, either.) Making someone stay when they don't want to be there has always been cruel.
News
General
Opinion
True Crime
Politics
Sport
Explainer
Entertainment
Celebrity
Reality TV
Movies
TV
Books
Rogue
Royal
Lifestyle
Beauty
Fashion
Weddings
Home
Wellness
Health
Fitness
Travel
Food
Parents
Before The Bump
Pregnancy
Baby
Kids
Teens
School
Parent Opinion
Work & Money
Money
Finance
Career
Lady Startup
Relationships
Sex
Dating
Separation
Friendship
Family
Real Life
Couples