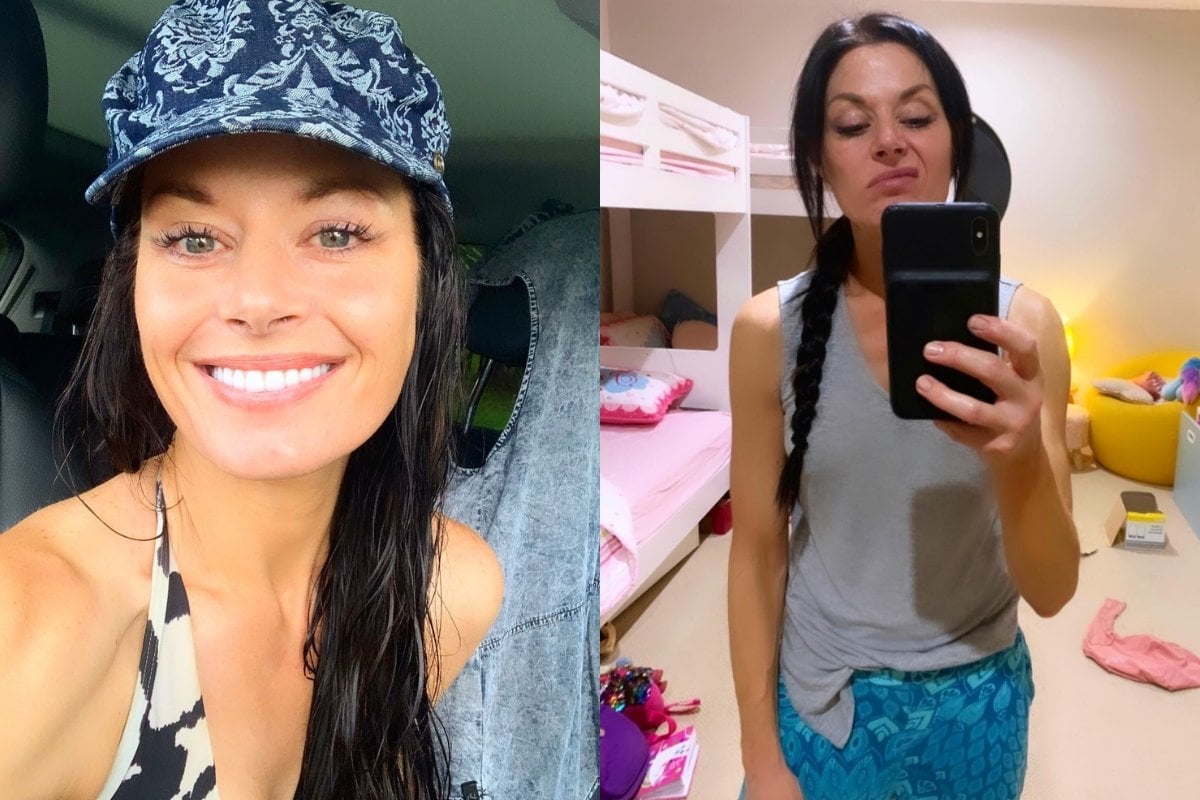 First comes love, then comes marriage… and in this day and age the statistical follow up seems to be then comes divorce, then comes dating, then (omg cringe) SEX then maybe love again.

Sheesh, I'm getting a mild migraine just contemplating it.

So how do you 'restart' dating?

When you have spent a significant portion of your life as one half as a duo and suddenly find yourself a solo act, the very thought is daunting. Modern dating isn't just another world, it's an entirely alien star system, despite any fantasies you might harbour about being snatched from your bed in the middle of the night and probed (eww).

Listen to me on Mamamia's new podcast Restart. This week, I chat to Rebekah Campbell, who set herself the challenge of going on 138 dates in one year to try and shake herself out of a dating slump. Post continues after audio.

I know it's all about dipping your toe in the pool, but for me, the dating pool now is less of the Olympic variety, and more inflatable toddlers paddling.

No one is going the distance, staying in their lane or striving for gold when it comes to online dating. It’s a more soupy mess of tangled toys, tantrums and inflatables. Too many bodies and grinning faces crammed in too small a space with about as much romance as a public toilet, and often used for the same purpose... so I'm not sure how keen I am to dive in.

Running with that metaphor, I tend to look at dating like a toddler would a bowl of soup; looks good, I'd like to try it, but I've got absolutely no idea how to do it, what to do with it, or if I have the requisite skills to manage it.

There is little that doubt things will get messy...

Talking 'the talk' of dating presents the first hurdle. I have a long-term love affair with wordplay but never realised the dating scene would open up an entirely new language for me to explore.

There's ‘ghosting’ which involves hooking up once or twice, then DISAPPEARING FROM THE FACE OF THE EARTH.

Then there is 'catfishing'. What I thought was the national water sport of Mississippi is in fact grooming and forging an online relationship with someone under a false character, then infiltrating and blowing up their life WITHOUT EVER MEETING THEM.

I know! Wild, right? What it has to do with either cats or fishing, I'm not sure but I'm gonna roll with it.

Then there is the ‘swipe’, the ‘zombie’, the ‘backslide’, the ‘DTF’ and its tamer equivalent 'Netflix and chill'... I'll leave it to you to google that but let's just say some are nouns and some are verbs and some are definitely adjectives.

Yet none of them are popular 80s disco moves. Don't even get me started on unsolicited d**k pics...

Regardless of the jargon you employ, the idiom of dating is all part of the language of 'trying to be loved' and I'm determined to become fluent... as an anthropological study (and maybe get fodder for this week's Restart podcast).

So I'm putting my hand up and asking those who have restarted and may have found happily ever after (or had a lot of fun trying) to please HELP.

Okay, it’s confession time: I've never 'technically' dated.. as in, I’ve never scheduled a meal, drink or event with the specific purpose of 'feeling out' another for relationship potential. Never ‘scoped the scene’ or ‘read the room’ in search of someone special. I've never undertaken a 'love reccy' so to speak... I'm clumsy at the best of times, dead set un-co the rest.

Historically, I’ve had a tendency to trip and fall into meaningful connections and thus I thought this was how relationships were born. Boy meets girl at a site of mutual interest (insert museum or pub or rare stamp appreciation society here) and over a period of days, weeks and months discover a collection of other mutual interests which - in essence - transforms a clutch of collective nouns such as 'us', 'them', 'they' and suddenly you realise, "Oh! It's now a 'you', 'me' and 'we'... This is a relationship!"

In this, the age of cyber connectivity, love is just a click, flip, and preferably not flick, away. It’s a whole new digital world and I’m still struggling with analog. It’s a world in which I have no map, sat nav or directory assistance.

I don't know much about it as it is still something of an abstract concept I'm happy to view from afar like tennis… But it’s all about ‘game, set, match’ and it seems you have to work your way through a lot of deuces before you score love.

On the topic of love restarts, let’s not ignore the saucily attired, heavy breathing white elephant in the room: sex. After a lengthy relationship and kids, how do you get your sexy back when the most va-va-voom you’ve had of late is vacuuming the floor without getting a Lego brick stuck in the nozzle?

When first contemplating a restart on the dating scene I remember hyperventilating, but what about... sex? What if I've forgotten what to do? What if they don't like my body? Naturally, a little apocalyptic self-sabotage followed until my friend simply said: "if you find yourself getting hot and heavy, just ask them what they like!"

Hot… and heavy? Sounds like how I feel when I discover I’ve foolishly left the winter doona on the bed in high summer! And while asking what they like is good advice, what if YOU don't know what YOU like?

What if, amid the fury of family and work and life in general you never had the chance, the guts or the sheer energy to explore what makes you tick?

I won't lie, there were a few years there where I was the go-to girl for celluloid sensuality. I've done my fair share of tasteful sex scenes but they shouldn't be taken as a litmus test for what I like, any more than they should be seen as a reflection of who I am.

Simple fact is, through trial, error, and a few belly laughs, I've discovered I am at my sexiest when I’m just being me. I've learnt to like my skin, I live in it; its only job is to fit the big life I live. And I love this body, it's brought six exceptional little human beings into the world yet still manages to jump off waterfalls, plant forests and deliver outstanding hugs. The way I see it, my body is a prize, a gift, so unwrap it tenderly, marvel at its capabilities… and treasure it.

That's how I expect anyone I might engage with romantically to treat it, and that is how I'm determined to treat myself.

It all began with a determination to look in the mirror and like what I see.

It's all about hitting restart.

For more from Madeleine West, listen to Restart, a Mamamia podcast looking into why more and more women are pressing refresh on their lives, and how the hell they’ve done it. From divorce to health, to appearance, to career, to sex.   Restart, it’s never too late to change everything.