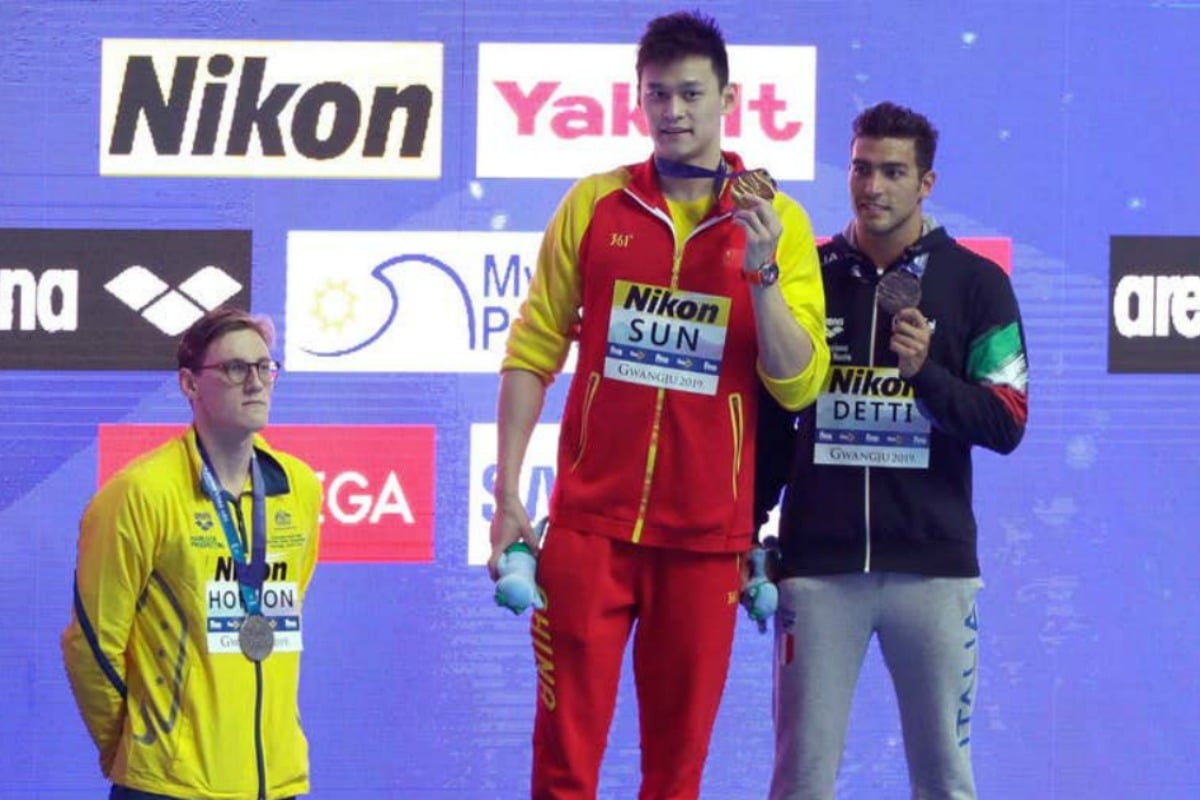 At first, people were confused as to why Mack Horton was kneeling.

Alongside Italian bronze medallist Gabriele Detti and Chinese gold medallist Sun Yang, the 23-year-old Australian looked for a moment like he was resting on his knees, his face stern and unmoving.

But Horton was not kneeling. He was standing behind his second place podium at the swimming World Championships in South Korea – refusing to step onto it. To do so, would be to stand beside 27-year-old Sun, a man he called a “drug cheat” after beating him at the 2016 Rio Olympics.

Horton did not shake hands with Sun or pose for photographs with his silver medal. He stood back, his jaw clenched and his chin up.

Olympic Gold Medallist Mack Horton is making no secret of his bitter feud with China’s Sun Yang, refusing to share the podium with him at the World Championships. @MimiRoseBecker #9News pic.twitter.com/a5UHP77cey

And while Australia understands why, there is a larger question looming about whether Horton’s protest was appropriate at an official ceremony.

In May 2014, Sun tested positive to the drug trimetazidine, then considered a stimulant. It had been prohibited by the World Anti Doping Agency (WADA) four months earlier. He was banned from competing for three months and stripped of his win at the Chinese nationals.

Sun claimed that he was prescribed the drug by a doctor for his heart palpitations, which he’d been suffering from for six years, and did not know it had been added to the list of banned substances.

The WADA found that, “Sun proved with sufficient evidence that he did not intent to cheat, which helped reduce the ban to three months”.

But did Sun truly not know the substance was banned?

Jeff Bond, a registered sport and exercise psychologist, who worked at nine summer and winter Olympic Games, specifically in swimming, as well as multiple World Championships and Commonwealth Games, doesn’t think so.

Speaking broadly about drug taking in sport to Mamamia, he said, “I don’t think many athletes make mistakes these days, they’re pretty well educated on all the regulations around drugs and types of drugs.. and they all specify that it’s the athlete’s responsibility.

“I don’t think in this day and age… we could look at an athlete and excuse them and say they might have just made a mistake,” he said.

Regardless of what many believe, Sun returned to swimming in the second half of 2014, which is what prompted Horton’s “drug cheat” remarks at the Rio Games in 2016.

But things have since become more complicated. And it was the ‘rumours’ that no doubt inspired Horton’s protest.

In January of this year, it was reported that Sun and his team smashed vials of their blood samples with a hammer following a drug test at his home. If these claims are found to be true, then Sun is facing a lifetime ban.

It’s probably worth considering, for a moment, the validity of those reports.

While swimmers all over the world have spoken out publicly about their complete disavowal of such behaviour, with America’s Lilly King remarking that the governing body ought to “[not let] people have smashed blood vials in tests compete in their meets,” the story might be a little more complicated than that.

In an ABC analysis, Tracey Holmes argues that there were valid reasons why Sun didn’t trust those collecting the sample.

An official inquiry found that the blood was not collected with proper authorisation and therefore was “invalid and void”.

That same inquiry determined that four hours after the drug test had commenced, Sun’s entourage decided they did not trust the testers and “refused to let the blood vial be taken”.

The security guard is then said to have smashed the blood vial with a hammer.

A panel found that Sun had “not committed an anti-doping rule violation,” although at this point, WADA have not accepted those findings and are launching their own investigation.

So, did Sun have the blood vials destroyed because he did not trust the process he was being subjected to? He knows, better than most, how the words ‘drug cheat’ tend to stick. Perhaps all he wanted was a fair test. Or, was Sun trying to hide something?

At this stage, we can’t know. And Horton can’t either.

As former Australian Sports Anti Doping Authority CEO Richard Ings tweeted, “I am no fan of Sun Yang. But he has served his suspension for a doping violation and he has been cleared by a FINA panel of refusing to provide a sample. Innocent unless and until proven guilty.

“Not standing on the podium with him should attract a hefty penalty.”

Jeff Bond isn’t convinced either that Horton’s protest was the correct course of action.

“I’m a bit old fashioned, I think it’s disrespectful. I think there are other ways you can possibly make the kind of statements that Mack Horton wants to make.

“I mean body language is a big tell all, he could have stood up on the podium and simply turned his back slightly. And then congratulating the third place getter and then ignoring the first place getter is another way of doing it. He also has plenty of social media access.”

He added, “You’ve got to give him some credit he stuck to his principles but I’m not sure he went about it in exactly the right way”.

While Bond believes Horton is “entitled to be outraged” he also things big ceremonial occasions ought to be respected.

In many ways, Horton’s point has already been made. A lot of people agree with him.

But on that podium on Sunday was another athlete, Gabriele Detti, who had his moment somewhat eclipsed.

Although he might have his opinions about the actions of Sun, he shook the gold medal winners hand. And he stood on the podium.

It’s not hard to understand why Horton did what he did on Sunday. And like Bond said, his conviction is worthy of respect. He was standing up for what he believes in –  a young man genuinely trying to do the right thing.

But Horton put it best in a comment made before the ceremony on Sunday.

“I think you know what the rivalry is like,” he said regarding Sun.

“His [Sun’s] actions and how it has been handled speak louder than anything I will ever say.”

And we have to trust that justice will prevail in the end.

It baffles me why some athletes choose to cheat in sport. Even if they do win a race, they’ll know in their hearts that the win didn’t really belong to them and wasn’t deserved. There’ll never be a feeling of a true accomplishment. In essence, all they’re doing by cheating is robbing themselves of a genuine victory.

Well, money and fame would appear to be pretty big motivators.
I guess if it's a choice between feeling you aren't good enough after training your whole life or feeling ashamed that you cheated while sitting in your mansions, some people will choose the second option.

Because everyone genuinely is doing it. The argument that drugs are part of the sport now and something you use in training is pretty valid, new drugs are consistently created that evade the tests and bribery is rife. Which makes choosing not to use them like stubbornly trying to win the Tour de France on a unicycle.

We have to trust that justice will prevail in the end? Because swimming has such a great history of discovering and banning drug cheats, right? Is the author seriously suggesting it's a system worthy of trust?