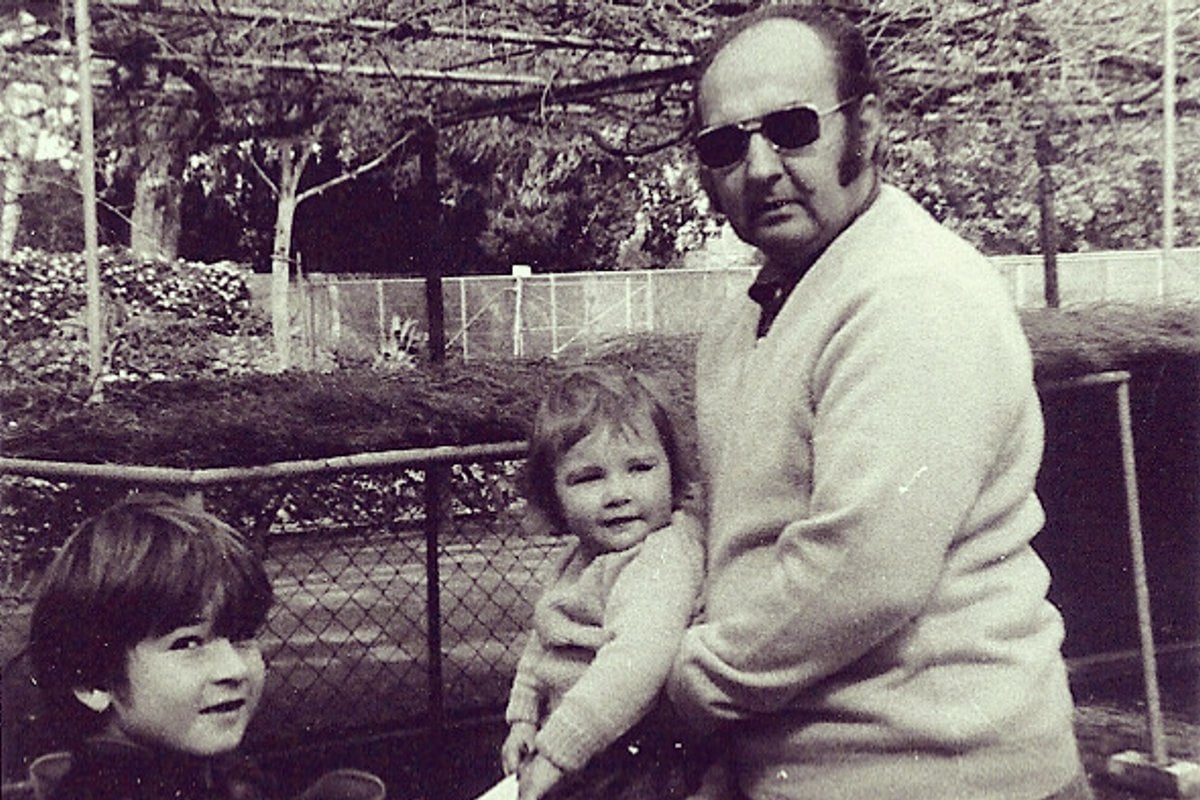 ﻿Growing up, my father wasn’t one for conversations. He’d sit on the sidelines, putting up with things until he didn’t, but back then his anger was a puff of smoke with a joke for an exclamation mark. If you smiled, he won.

Today, there’s no joking in his voice. He’s on the phone, announcing that he and Mum are getting a divorce. It’s heartbreaking but not because it’s true. It’s the same phone call that has started my morning every day this week.

“We’ll have to split the assets, sell the house. I need to find somewhere to live,” he says.

“But Dad,” I say, gently. “You have somewhere to live. You’re in the nursing home, remember?”

As he falls silent, I picture him taking in his surroundings – the cold vinyl floor, the hospital bed, the sterile atmosphere that asserts itself through the mountain of photos we put on the walls.

When he was diagnosed with vascular dementia, I dreaded watching him lose his memories to the point of no longer knowing us. But the reality is, there’s no graceful descent – it’s an erratic illness that eats away at the sweetest parts, constantly shifting from one day to the next. And this has been a bad week.

When journalist and author Amal Awad’s father was diagnosed with kidney failure, she made a surprising decision that changed their lives. In this episode of No Filter, she joins Mia Freedman to talk about how we come to truly know our parents in adulthood. Post continues below.

Mum visits him nearly every day, though we all tell her to have a rest. Dad is the habit of a lifetime and it’s a hard one to break. When she does take a day off because her hip’s playing up, the phone calls begin. We counted up to 20 one day. Seven missed in the single hour she spent commiserating with a neighbour whose husband is in the same place.

If she doesn’t answer, the chorus begins – first my phone, then my brother’s, then their friends. 'I can’t find your mother.' When he reaches her, desperation turns to venom. 'You don’t care about me. I want a divorce. I’m going to kill myself.'

There are endless YouTube videos about dementia and I’ve stashed every piece of advice away while praying I won’t ever need to use it. But lately, I seem to be using distraction a lot.

I promise to visit him later with doughnuts, asking if he remembers taking me to the shopping centre after dentist visits for the hot cinnamon kind, ruining all the good work he’d just paid for.

He goes quiet again, then makes a sound that could be a laugh. ‘We never did tell your mother.’

Growing up, lollies and chocolate bars were a staple. He kept a cupboard in the house for the sweet things that made our little faces light up. If I was sick, he’d take me out for ice cream, letting me choose as many flavours as I wanted. During my longs stays in hospital, he snuck in lemonade. He coaxed smiles with sweetness. It was a fair price to pay for a win.

He mostly only smiles for visitors now. It takes a lot to turn his sagging features into something warm and welcoming. A thousand tiny strokes and the progression of Parkinson’s are wearing his face into a mask of disapproval. Early photos of him predict it, his seriousness making him look like a Mafia Don. But I don’t remember him like that. He was always the clown, with mischievous eyes and a laugh that filled the room.

How I miss that laugh. 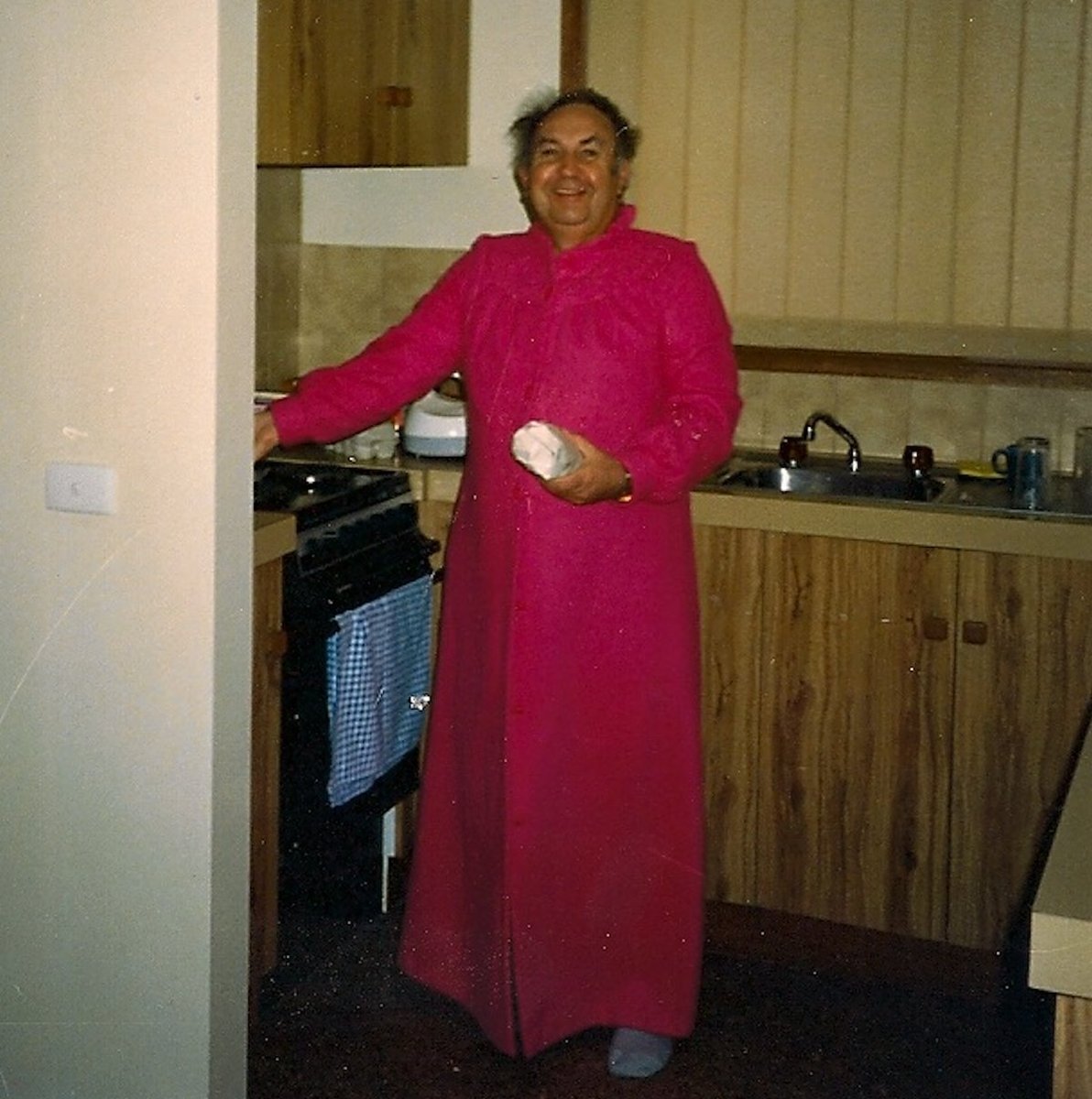 On the phone, he complains that Mum is mean to him, that she always sounds angry.

"Maybe because you asked for a divorce?" I’m careful to make it a suggestion. A whiff of not being on his side and I’m a traitor – at least until tomorrow.

He swears he’s never mentioned it before.

"Him and his bloody divorce nonsense," Mum said over a cuppa four days ago. "I told him if we were going to get a divorce, we should have done it years ago." I asked her to play along – it’s known as therapeutic lying, according to one of those YouTube videos – but that led to him phoning me in tears, asking why Mum hates him. "She wants a divorce!" he sobbed. "I don’t want to lose her. Why is she doing this to me?"

"I need you to trust me on this," I say. "We’ve had this conversation every day this week. There’s not going to be a divorce. We all love you." I repeat what the doctors have told him, how his brain won’t hold the information anymore. Where once it was a filing cabinet, now it’s a waste bin and dementia is an overly efficient cleaner.

I know I shouldn’t bother. Tomorrow we’ll have this conversation again. But there are moments of clarity that sting me with hope – on good days, those moments stretch out, but this week they only flicker.

"Did I do something to make her stay away?" he says.

He used to be my protector. The squishy pillow I rested on while watching comedies on the ABC, the comforting smell of dirt and grease ever-present from his days in the workshop. After school, I’d sit on the cold brick fence, waiting for him to glide around the corner on his rickety old bike, his leather kitbag strapped on the back. The bike eventually became mine, and I’d ride it creaking to meet my best friend at the corner deli, to buy lollies and cigarettes.

He phones again mid-morning, then again at lunch. Angrier each time, though they follow the same format: a list of things Mum hasn’t done, how she’s stolen his money and left him to rot. How she never gives him a smile.

Mum never laughed at Dad’s jokes, or the stories he told at the dinner table of outlandish pranks he’d played on the guys at work. She’d just roll her eyes and afterwards, they’d do the dishes together, Dad wiping and joking while Mum washed. He didn’t cook, but on Saturdays when Mum was at work, he made hotdogs for lunch and walked us to the deli to get lollies and a Paddle pop. Mum would grumble at him when she got home and he’d give me a wink.

What did make her laugh was the way he played cards. He cheated and never tried to hide it, and she always laughed when she realised she’d fallen for it again.

Sometimes we played cards in teams and Dad labelled the scorecard ‘us’ and ‘them’. I was the laugher at his jokes and receiver of his winks. He was on my side: a teammate who would drop everything to ferry me to appointments, the fixer of broken toys and the holder of bikes as I struggled to ride.

He never let me fall. 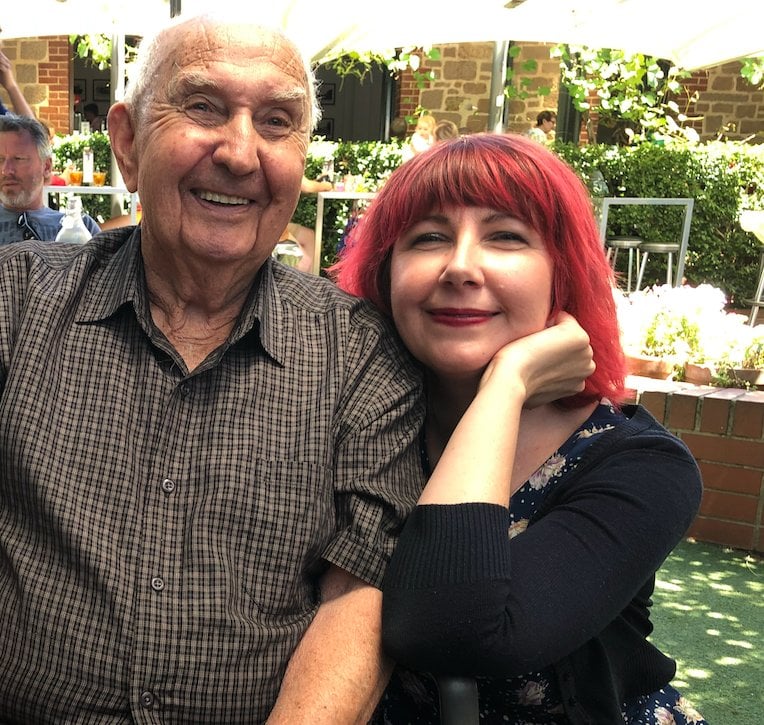 Sky and her dad at his 80th birthday. Image: Supplied.

In the end, it was a fall that put him in the nursing home. Parkinson’s disease, metal knees and a refusal to eat despite Mum’s pleas weren’t a good combination.

I’d already been talking to the nursing home – the most heartbreaking of all the calls I’d made in two years of wrangling a complex and heartless aged care system – and as I watched the ambulance pull away, I knew he’d never come home properly again.

The hardest part was lying. As I sat by his hospital bed, when he wasn’t begging me to take him home, I told him how we’d arranged a room in the home so he could recover there. "Mum can’t look after you until you’re well again."

It took a week for him to realise he might be there longer. I’d told him how sick he was. "Your kidneys were shutting down because you wouldn’t eat or drink. If you hadn’t gone to hospital, you’d be dead." He’d nodded, then suggested it like it was his idea. "I don’t think your mother can cope. I might have to stay here a bit longer."

That was six months ago. Since then, there have been fewer falls, but even fewer smiles.

Some days I feel like pushing him over the edge, wanting the jolt to wake him from this nightmare so he can see that no one has abandoned him, that we’ll always be a team, that I’ll always be on his side. One day, in desperation, I pleaded with him to fight. "Dementia is a liar, Dad. It wants you to believe that you’re all alone. It tricks you. Don’t let it, even when everything it tells you feels true. Tell it you know it’s lying."

"It wants me to push everyone away," he said, sobbing. "You’re all better off without me. I don’t want to be a burden." I held him while he cried.

When I get to the nursing home, I find him sitting in his chair. There’s an empty bowl by his bed that was full of lollies yesterday. We buy large bags of them, even though he isn’t allowed to eat them – everything he enjoys is a choking hazard.

He likes handing out ‘medicine’ to the other residents after dinner. One likes jelly babies, another chocolate bullets. The lady across the hall has a thing for M&Ms.

As we move through the corridor, their faces light up when they see him.

Dementia hasn’t taken that. I count it as a win.

N
niclips a year ago

Reply
Upvote
Sending you lots of love and strength for the toughest of battles , such a heart breaking journey for your family
M
mamamia-user-482898552 a year ago