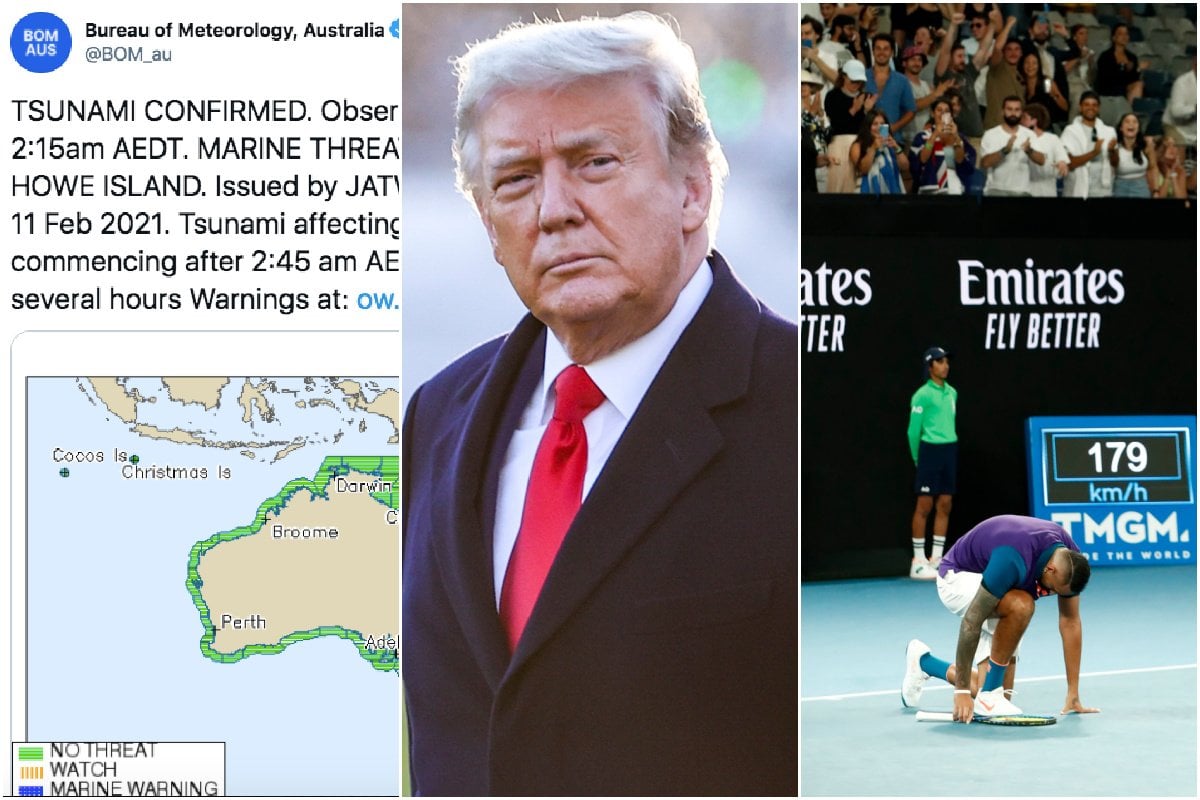 A tsunami warning has been issued for Lord Howe Island, off the NSW coast, after an earthquake near the Loyalty Islands within New Caledonia.

New Zealand authorities are also on alert, urging residents along its northern coast to avoid beaches and shore areas.

The New Zealand National Emergency Management Agency said people should get out of the water, off beaches and away from harbours, rivers and estuaries in areas from Ahipara to Bay of Islands, Great Barrier Island and from Matata to Tolaga Bay.

"We expect New Zealand coastal areas to experience strong and unusual currents and unpredictable surges at the shore," the agency said in a statement.

Geoscience Australia said the 7.6 magnitude quake's epicentre was about 400km east of Tadine, New Caledonia, and was at a depth of 54km.

The quake, at 12.20am AEDT on Thursday, followed at least three other tremors in the region with magnitudes ranging from 6.0 to 6.2 in a span of just over an hour.

"Sea level observations have confirmed a tsunami has been generated," the Joint Australian Tsunami Warning Centre said in a bulletin, adding that a marine warning was current for Lord Howe Island from 2.45 am AEDT.

"People in areas with threat of land inundation and flooding are strongly advised by emergency authorities to go to higher ground or at least 1 kilometre inland," the JATWC bulletin advised.

Democrats are formally making their case that Donald Trump should be convicted for inciting the US Capitol siege, a day after a divided Senate concluded his impeachment trial could proceed though he's left office.

The House of Representatives has charged the former president with inciting an insurrection after he delivered a fiery speech on January 6 exhorting thousands of supporters to march on the US Capitol where members of Congress were gathered to certify President Joe Biden's electoral victory.

On Tuesday, the Senate voted largely along party lines that the impeachment trial could move ahead even though Trump's term ended on January 20. Six out of 50 Republican senators broke with their caucus to side with Democrats.

Yesterday 6 of my Republican colleagues joined the Democrats in voting to confirm the constitutionality of Trump's impeachment trial:

May others follow their lead in putting their country above party.

The outcome suggests Democrats face long odds in securing a conviction and barring Trump from ever again seeking public office. A two-thirds majority in the Senate must vote to convict, which means at least 17 Republicans would have to defy Trump's still-potent popularity among Republican voters.

HAPPENING NOW—IMPEACHMENT ARGUMENTS BEGIN: After an emotional first day, House impeachment mangers are laying out the full case against former Pres. Trump on Day 2 of the trial. https://t.co/TNKuZnGZjn

The trial has been told that prosecutors in Georgia's Fulton County opened a criminal investigation into Mr Trump's behaviour this week in relation to the election itself.

Legal experts have said Mr Trump may have violated multiple statutes. One of them involves solicitation to commit election fraud, and another deals with "intentional interference" with someone's performance of "election duties".

"He says it right there. The President of the United States telling a public official to manufacture the exact votes needed so he can win," said Ms Dean.

South Australia has locked out travellers from greater Melbourne after further COVID-19 cases were linked to a hotel quarantine outbreak in Victoria.

The lockout came into effect from 12.01am on Thursday, South Australian time.

Returning SA residents, people relocating and other exempt travellers would still be allowed in but would need to quarantine for 14 days.

#BREAKING: South Australia will close its border with greater Melbourne at midnight in what has been described as a “snap decision” that has put the state capital’s festival season in disarray. https://t.co/BjqlnNtypn

"Our steps in South Australia are taken with an abundance of caution to make sure we're minimising the risk but at the same time, not taking steps that aren't deemed to be necessary," he said earlier on Wednesday.

Regional Victoria and cross-border communities are not affected by the planned restrictions.

COVID-19 could be on the move in the Victorian community, with more exposure sites identified as a hotel quarantine outbreak continues to grow.

The latest two infections will be included in Thursday's case tally.

Two banks at Glen Waverley in Melbourne's southeast have been added to the list of potential exposure sites, which are spread across the city.

There are now fears the Melbourne Holiday Inn cluster may have leaked across the border into New South Wales. #9Today pic.twitter.com/eqYRXMWasj

It is unclear whether the banks were visited by either the hotel worker, former guest or other previously announced cases.

It has forced the hotel's closure until further notice, while plans to increase the state's weekly cap on international arrivals from 1120 to 1310 from next week have been put on hold.

Businesses and workers have registered increasing anxiety over the looming end of wage subsidies, as Treasury prepares to face questions about JobKeeper's expiry.

RBA Governor typically diplomatic today, but can’t help admitting that “when JobKeeper ends there will be some job-shedding”

The recovery is fragile & millions of Australians are still struggling. Why is Scott Morrison rushing to cut all support now?

"Naturally these people are very concerned about what is around the corner for them and whether they will be left behind in the COVID recovery," she told AAP.

"JobKeeper has been a lifeline for so many during this crisis and Scott Morrison wants to rip it away without telling those who are still struggling how they will be supported when these payments stop."

The government argues there are a range of other business support programs in place and has not ruled out targeted packages for sectors like tourism beyond March.

But Senator Gallagher said the committee would scrutinise that claim.

"We want answers about what support will exist for these people after the March JobKeeper cliff and what impact the prime minister's decision to axe JobKeeper will have on the economy," she said.

Kyrgios "afraid" to face the media after extraordinary win.

A frenzied crowd and fear of a negative media reaction helped drive Nick Kyrgios to his greatest Australian Open triumph.

The Australian came back from the dead in his second round encounter with Frenchman Ugo Humbert, saving two match points in the fourth set for a stunning 5-7 6-4 3-6 7-6 (7-2) 6-4 victory.

Initially unsure exactly how he pulled it out of the bag, Kyrgios said an "insane" atmosphere helped. And the thought of facing the fourth estate.

"Honestly, that is one of the craziest matches I’ve ever played."

"I was afraid to come into this room, you know," he told a press conference after the match.

"(And) go to my Airbnb and just read about it and take it all in, take all the negativity in that I have already taken.

"It's not easy to come back and try and put it all behind. I have been through a lot, and I didn't just put my hand in a lucky dip and disappear."

Speaking with his physio after the match, Kyrgios said it was right up there with his best wins anywhere.

"He's seen me tank matches, play epic five-setters, everything, and that was still one of the most crazy matches for both of us," he said.

The match wasn't without Kyrgios' trademark temper, having already received code violations for destroying his racquet and hitting a ball at the umpire’s chair, the 25-year-old went on another tirade when a malfunctioning net-cord vibration-detecting device appeared to consistently play up.

Eight men in England and Scotland have been arrested after several US celebrities reported their phones had been hacked, the UK National Crime Agency (NCA) says.

The suspects are accused of working together to access the phones of influencers, sports stars, musicians and their families last year, the NCA said.

The names of the victims were not released.

The men aged 18 to 26 were arrested on Tuesday, according to Europol, and could face charges of computer misuse act offences and money laundering.

The NCA said victims' phone numbers were taken over by hacking their SIM cards, allowing criminals to control the victims' apps remotely.

Money and personal information such as contacts were stolen from the targets.

- The Prince of Wales and the Duchess of Cornwall have had their first COVID-19 vaccinations, Clarence House says. Heir to the throne Charles, 72, and Camilla, 73, are, as over 70-year-olds, in the fourth priority group for the rollout of the jabs.