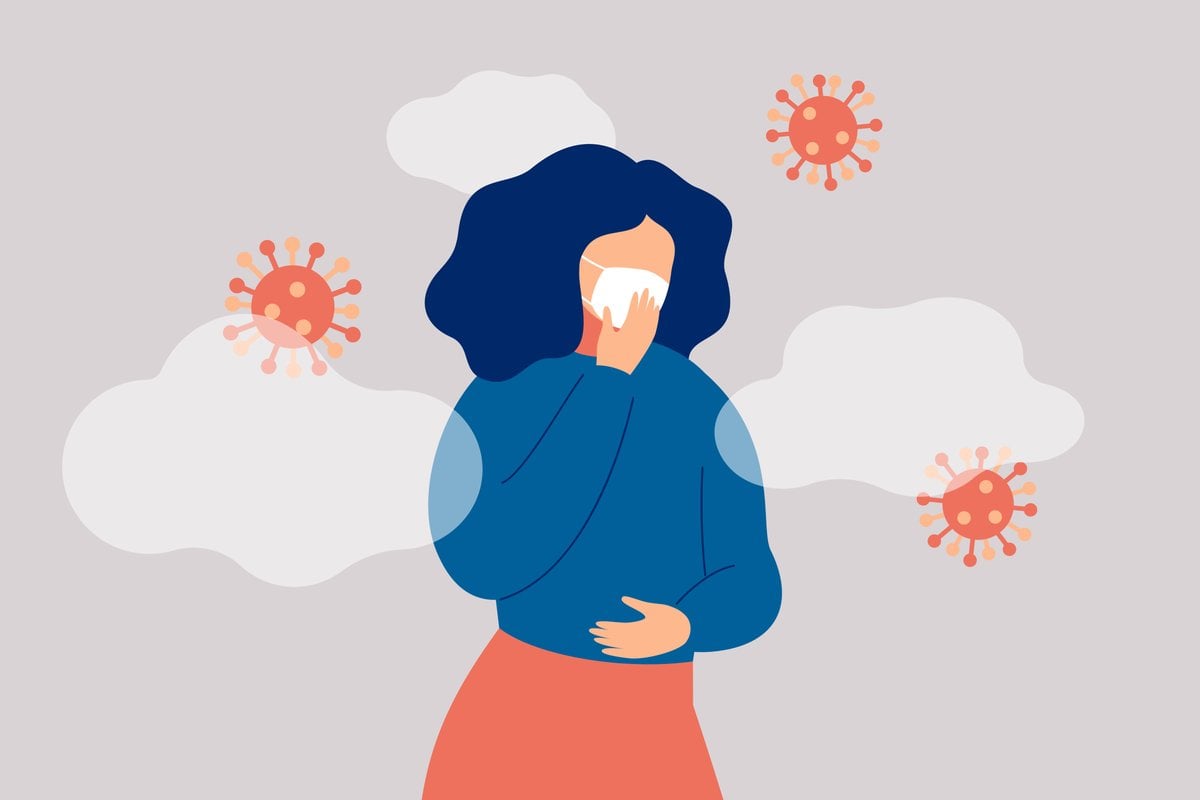 Some of the biggest questions around COVID right now are not so much about the virus itself, but rather 'long COVID' - the symptoms people are experiencing months after contracting the virus. Fatigue. Brain fog. Loss of taste and smell.

It's a distressing aspect of the pandemic, and one that has been shrouded in mystery - with health experts struggling to answer why some patients recover soon after infection, while others struggle with lingering symptoms for months on end.

Watch: Here are some signs to use when talking about COVID. Post continues below.

However, a recent study has attempted to pinpoint the answers to some of these questions, following more than 200 patients and monitoring their symptoms after being diagnosed with COVID.

Here, we look at some of these findings and ask GP Dr Imaan Joshi from Skin Essentials to break it down for us.

Are some people more prone to long COVID than others?

In case you need a quick rundown, 'long COVID' is defined by the Centers for Disease Control and Prevention (CDC) as new, recurring, or ongoing symptoms four or more weeks after infection, sometimes after initial symptom recovery.

Some of the common symptoms include fatigue, cough, and loss of taste/smell.

When it comes to who is most at risk of developing these symptoms, Dr Joshi said the jury is still out on whether some people are more prone to long COVID than others.

What factors increase the risk of long COVID?

"The intriguing, early, small scale longitudinal study followed a small group of COVID positive people from infection through to recovery, and for two to three months later. It compared them to healthy controls to pinpoint differences over that time frame."

Off the back of the study, there were four main factors that researchers suggested may be involved in the risk of developing long COVID.

3. Reactivation of Epstein-Barr virus (EBV) detected in blood (a virus that usually remains dormant in most people).

According to Dr Joshi, "The study also suggested that being female, having pre-existing respiratory illness, and a higher red blood cell count at the time of COVID diagnosis correlated with long COVID symptoms."

Jim Heath, who is the principal investigator of the study and president of the Institute for Systems Biology, told The Sydney Morning Herald, "I think this research stresses the importance of doing measurements early in the disease course to figure out how to treat patients, even if we don’t really know how we’re going to use all that information yet."

"Once you can measure something, then you may be able to start doing something about it," he added.

"We did this analysis because we know patients will go to physicians and they’ll say that they’re tired all the time or whatever, and the physician just tells them to get more sleep. That’s not very helpful. So, we wanted to actually have a way to quantify and say that there’s actually something wrong with these patients."

Are there any red flags for long COVID?

According to Dr Joshi, there's no clear answer to this as yet.

"This is a hard one. On social media I’ve noticed a lot of anxiety about persistent symptoms - such as cough and fatigue - at two weeks for example, when it’s generally well known that respiratory viruses including the common cold and influenza may cause persistent cough for several weeks, as well as a slower return to normal function than might be hoped for," she shared.

"As such, I’m not sure there’s any reliable red flags or signs during the initial two to four weeks post-recovery that would alert one as to their risk of long COVID.

"What we are seeing, in line with this initial study, is that people with pre-existing illness, such as type two diabetes, autoimmune disease and those who are on immune suppressive medication, often take longer to recover from the virus compared to someone without these conditions."

However, Dr Joshi suggests to take it all with a grain of salt before the four-week mark, and to seek medical advice after that if symptoms persist.

She adds that it’s important to keep in mind that while intriguing, this study has significant limitations.

"Now that COVID is finally among us, there remains a lot of anxiety in the community about not only getting it but also how quickly one is recovering from it and what’s considered normal."

Some of the limitations she refers to is that the study is a very small sample size and held over a very short duration of time. She also points out that symptoms are self reported (i.e. there’s no objective scale of measurement), and we would require more information as to the demographic followed.

Importantly, Dr Joshi adds that "it’s unreasonable to test everyone for EBV and SARS-CoV-2 in blood (which usually indicates a higher viral load than if just on swabs) - so please don’t go asking your doctor."