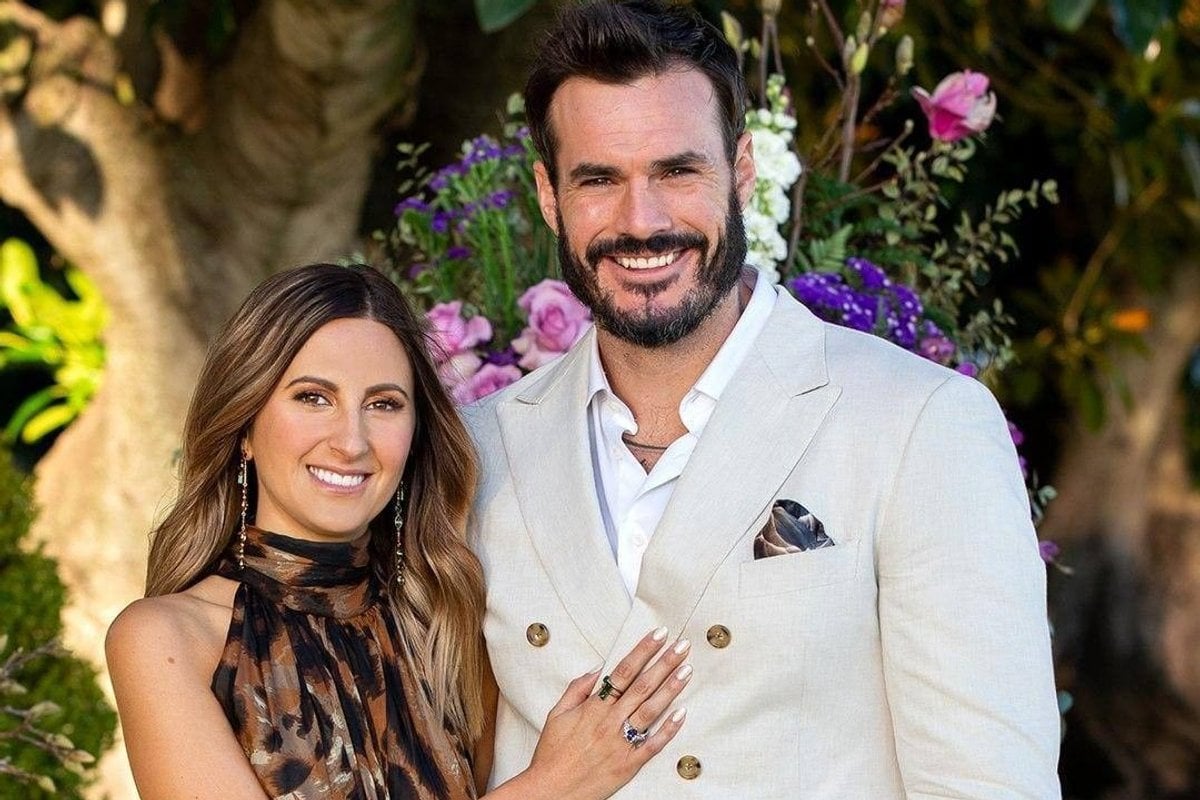 1. Irena is reportedly ‘worried’ about moving to Perth with Locky.

Almost three weeks on from The Bachelor finale, Locky Gilbert and Irena Srbinovska have been keeping themselves busing with camping, hiking and even more hiking.

Now, the couple are currently getting ready to move to Perth together. But it seems Irena may have some concerns.

Speaking to The Wash, the 31-year-old said she's "too busy worrying" about her move to Western Australia to respond to the Instagram drama with Bella Varelis.

"I’m not applying for a blue tick on Instagram [laughs]! Locky had his before The Bachelor. I don’t know, I might get one in the future – but for now I’m focussed on us. I’m too busy worrying about us getting to WA, that’s my focus," she told the publication.

Not only does Irena need to pack up her life up and move from her home in Melbourne, her and Locky will also be required to quarantine in a hotel for two weeks once they get to Western Australia.

It sounds like they have a lot on their plate. But here's hoping the lovebirds can make it through.

Listen to The Spill, Mamamia's daily entertainment podcast. In this episode, Laura Brodnik and Kee Reece chat about the new way Dominic West and his wife Catherine Fitzgerald are fending off media attention. Post continues below.

2. There’s supposedly a mass exodus on The Bachelorette this week, so strap in folks.

Well folks, it looks like we're in for a wild week on The Bachelorette.

According to The Wash, a mass exodus is set to go down this week, with not one but six contestants expected to leave the mansion.

An inside source reportedly told the publication that one contestant was asked to leave, four didn't receive roses and another decided to straight up quit. ﻿

Woman's Day reports a similar incident, claiming two contestants walk out of the mansion because they "just weren't feeling it".

"It's a pressure cooker of personalities and they just wanted out. It wasn't what they thought it was going to be," a source reportedly told the publication.

The So Dramatic! podcast has also spilled some tea on the situation. According to host Megan Pustetto, we can expect a total of three "explosive" walk-outs, so with AB Sow being one walk-out already ticked off, we have two more to come.

While this is also just speculation, we can't wait to see what happens when The Bachelorette returns tonight at 7:30pm on Channel 10.

3. Apparently Zac Efron is on the brink of proposing to his Byron Bay girlfriend. RIP to our dreams.

There are rumours circulating that Zac Efron is about to propose to his Australian girlfriend, and BRB while we have a cry.

Reports have noted that Zac Efron turns 33 this weekend. And apparently, he's going to celebrate by proposing to his Byron Bay girlfriend of a few months, Vanessa Valladares.

The supposed evidence that suggests this might happen stems from both Efron and Vanessa being awfully quiet on social media for the past few weeks, as well as some comments made by the actor himself.

During his documentary Down To Earth, he said, "I've got to get out of Hollywood, I'm done. It's not a place conducive to living a long, happy, mentally-sound life".

"The nature of being an actor or being in the public eye, sort of leads to isolation at times. I currently have a roommate but sometimes it's hard to go out," he continued.

Although this evidence doesn't confirm anything, it seems his relationship with Vanessa is getting quite serious.

Efron, 32, has been living in Byron Bay for months now, riding out the coronavirus pandemic in the coastal town. And in August he cancelled his scheduled flight back to the US, after his tourist visa was extended from three to 12 months.

In September, the couple were spotted in popular Sydney restaurants including Catalina in Rose Bay at Totti's in Bondi. Plus, there are reports that Efron is on the market to buy a place in Byron Bay.

The couple met in July when 25-year-old Vanessa Valladares was working as a waitress at the Byron Bay General Store, one of the town's most iconic cafes.

So, guess we'll just have to wait and see if he pops the question this weekend.

4. Elyse Knowles had to pull some ‘tactical chunders’ to hide her pregnancy at work.

Australian model and 2017 The Block winner, Elyse Knowles, recently announced that she was expecting her first child with partner, Josh Barker.

She has also now shared that before the news became public knowledge, she had to battle her morning sickness in private.

Speaking to The Daily Telegraph on Wednesday, the 28-year-old explained that there were moments when she had to rush off and vomit while working.

"I definitely had a few work commitments where I would have to puke on the side without anyone knowing," she explained.

However, now a little further down the track with her pregnancy, she's "feeling much better and alive now".

5. A famous dad and a fiancé she met on set: Lily Collins' life in the spotlight.

Lily Collins has spent her entire life around cameras.

The 31-year-old - whose most recent work, Netflix's Emily in Paris, has become the guilty pleasure we needed in 2020 - has been living in the spotlight since her birth, and starred in her first on screen role at just two-years-old.

Born in Surrey, England, to musician Phil Collins and his second wife, American Jill Tavelman, Collins' appeared in the BBC series Growing Pains, when she was a toddler.

Her parents split in 1994, and she moved with her mother to Los Angeles where she spent most of her childhood. 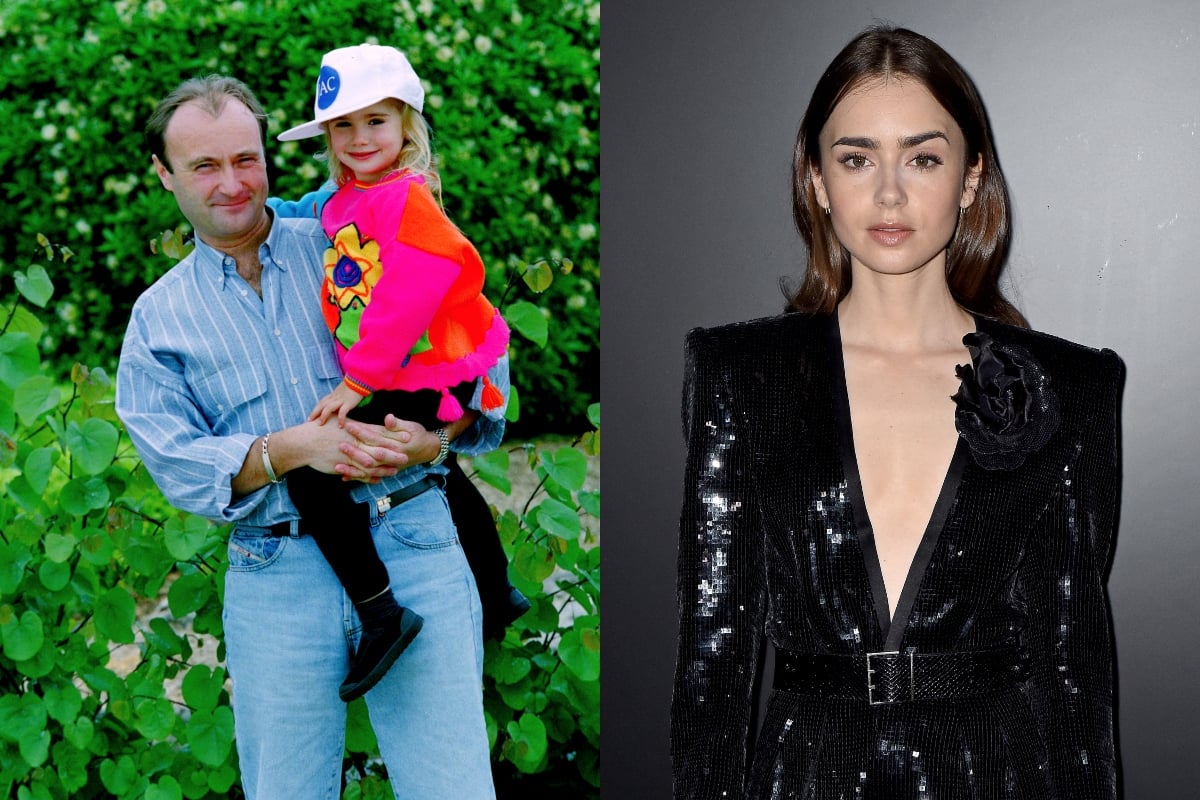 As a teenager, Collins had dreams of being on camera in a different capacity. She studied broadcast journalism at the University of Southern California and wrote for Seventeen, Teen Vogue and the Los Angeles Times, and had her own column 'NY Confidential' in British magazine Elle Girl. In 2008 she reported on the US presidential election for Nickelodeon.

She began modelling, and in 2007 was selected by Chanel to wear one of their gowns at the 2007 Bal des débutantes at the Hôtel de Crillon in Paris, which was featured on season three of the reality television series The Hills.

In 2008, Spain's Glamour magazine named her its International Model of the Year.

In 2009, she returned to acting with her adult debut in two episodes of 90210 and the Oscar-nominated film The Blind Side, alongside Sandra Bullock.

For more on Lily Collins' life in the spotlight, read our earlier article here.