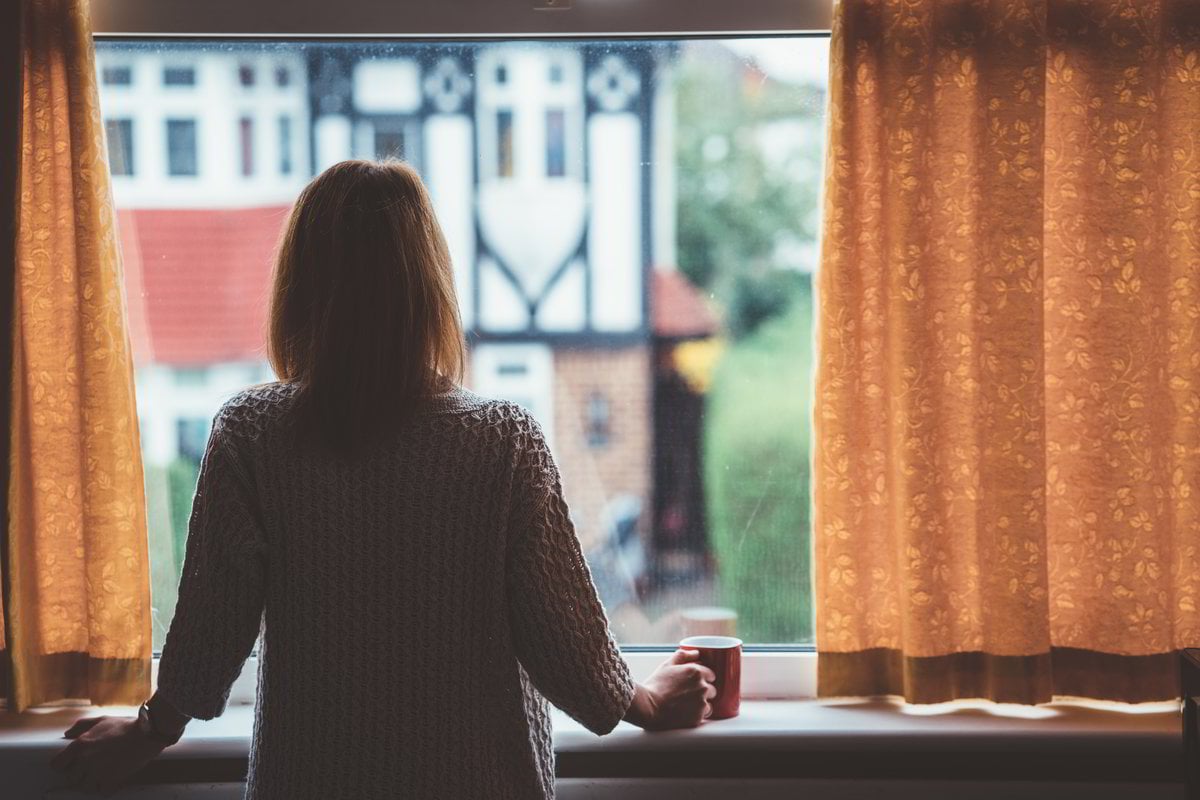 The 57-year-old widow lives in Melbourne, where residents are at the half-way mark of their six-week lockdown due to the coronavirus second wave.

Angela’s husband passed away just last year and she still weeps for him.

She has five grownup children who all live in different parts of Victoria, and who she wishes she could see everyday.

“I had been relying on them for emotional and moral support over the last year but now that’s all gone,” she explains to Mamamia.

“I do as much FaceTime calling as I can, but it’s not the same as having the human touch, which I know is the part that I’m really missing. You just want to touch someone or hug someone or give someone a kiss."

That’s it. The ache for human touch, to be back in the bosom of her family.

“I have two new grandchildren under 12 months and we are all missing out on spending that lovely time together which we are not ever going to get back.

Angela was one of the number of women who reached out to Mamamia about what the lockdown in Melbourne feels like, the second time round.

They all shared a common sentiment: things have changed. The days are colder and the hours feel longer.

“Last lockdown felt different,” says Sandy, a 29-year-old occupational therapist, who works in a major Melbourne hospital. “It felt like we were waiting for something to hit. It was exhausting but almost thrilling, what will come next, what do we need to prepare for.

“I thrive on a challenge and tasks and I found that the constant engagement in 'the plan' kept me sane and motivated.”

“Socially, people kept in touch, with phone calls and trivia quizzes, and I almost think I was socially busier than normaI. I feel like everyone is exhausted and the novelty activities - like cocktails on Zoom and virtual trivia - have really worn off.

“We also saw the effectiveness of lockdown really early on, with numbers declining rapidly which was reinforcing what we were doing and gave hope that this will end.”

Numbers in Melbourne at the moment are doing the opposite. This week, Melbourne has recorded their deadliest day yet, as well as their highest-single day spike in new cases since the pandemic began.

Premier Daniel Andrews has not yet said whether the six-week lockdown will be extended or not.

The weight of the uncertainty is felt by millions of Melburnians.

“This lockdown is quite bleak and scary,” the occupational therapist continues.

“The hospital is ever changing to meet increased need in COVID-19 patients and also preventing any spread within the hospital. We're all wearing face shields and masks and it feels really clinical. I know it's a hospital, but normally I feel quite connected to my patients through body language, facial expressions, even being physically closer than 1.5 metre to them when interacting with them.”

A woman in her 30s agrees, saying “it feels a lot more scary and close to home this time around".

Plus, she says, the attitude of ‘we’re all in this together’ seems to have dwindled, considering other cities and states in Australian aren’t confined to their own four walls.

“Seeing pictures on social media of friends in other states or regional areas is probably one of the worst parts. Especially my friends enjoying beers at the pub in the sunshine in Perth.

“It's cold and the middle of winter and everything feels a lot more depressing.”

It's tough times, south of the Murray River, as social distancing genuinely means a population distant from each other socially, and feeling the loneliness, as the trough of winter gets ever deeper and darker.

Melburnians are in search of some warmth. A hug would be nice.

Reply
Upvote
1 upvotes
I had a baby this year, and I have a newborn nephew. We've seen each other once since he was born. I haven't been able to go to a new parents group, or a playgroup, or even maternal and child health appointments. My parents can't visit their baby grandchild. My older child can't see her friends or family. I now have zero physical supports apart from my partner. I fear for all the women and families having babies this year, especially first time parents.
G
grumpier monster 2 years ago

Reply
Upvote
@mamamia-user-405278599 that would be very hard for all of you.
G
grumpier monster 2 years ago

Reply
Upvote
2 upvotes
I live in Melbourne. The figures are certainly more discouraging than the first time and that dos weigh on my mind. I can't do anything until I've watched Dan's daily update.

There is also a lot more judgement. I have SA friends and family and even follow several SA politicians. Their constant refrain that they've done the hard work and shouldn't let Victorians ruin it all is a bit hurtful. I agree 100% that the border should be closed, but to imply that South Australians have actually sacrificed as much as Melbournians in the first lock-down let alone the second is just wrong. Just a reminder for people living outside the state of Victoria. In a Victorian level 3 lock down, people are fined $1652 for sitting on a park bench (because they're not exercising) or going for a drive or seeing anyone without a valid reason. It's not that everyone is told to stay home. It is actively policed.
There's also the loneliness. Normally I'm pretty isolated and lonely. In the first lock-down people did connect more on-line through zoom parties etc. But we now know they aren't that helpful and hardly anybody suggests them. There's also the reality that 80% of the work-force haven't lost hours and actually have less time because of the home-schooling and extra support they need to provide to others. So they are less available for phone calls . (Damn the open plan living fad that means there is never a private phone call without kids and partners demanding attention or complaining about the disruption of someone talking on the phone.) And trying to chat with interstate people is depressing. They haven't been madly trying to find things to watch or bemoaning the closed libraries. They have been getting out into the sunshine with their friends and resuming their normal routines. I feel happy for them, but it hardly makes for a two way conversation.
I'm not denying that I'm thoroughly disappointed with the behaviour of some Victorians. It has been selfish or ignorant in the extreme. Watching Victorians deliberately sneaking across borders or partying or refusing to wear a mask feels like an added burden. I feel the shame of association even though I haven't done those things and neither have the vast majority of Victorians.
<
<deleted> 2 years ago

Reply
Upvote
3 upvotes
@grumpier monster I live in Sydney and I don’t think anyone here blames Victoria- I think we’re all a little surprised that we aren’t in the same place. I almost feel guilty going out to do normal things when melbourne is locked down. There’s a certain smugness from some of the smaller states who have had the luxury of closing down more completely, but I think here in NSW there’s more empathy than blame. The Sydney/melbourne rift is real but with 5 million people each and the international airports, our states were always at infinitely higher risk than the others and we’ve minimised the risk for everyone else.
News
General
Opinion
True Crime
Politics
Sport
Explainer
Entertainment
Celebrity
Reality TV
Movies
TV
Books
Rogue
Royal
Lifestyle
Beauty
Fashion
Weddings
Home
Wellness
Health
Fitness
Travel
Food
Parents
Before The Bump
Pregnancy
Baby
Kids
Teens
School
Parent Opinion
Work & Money
Money
Finance
Career
Lady Startup
Relationships
Sex
Dating
Separation
Friendship
Family
Real Life
Couples