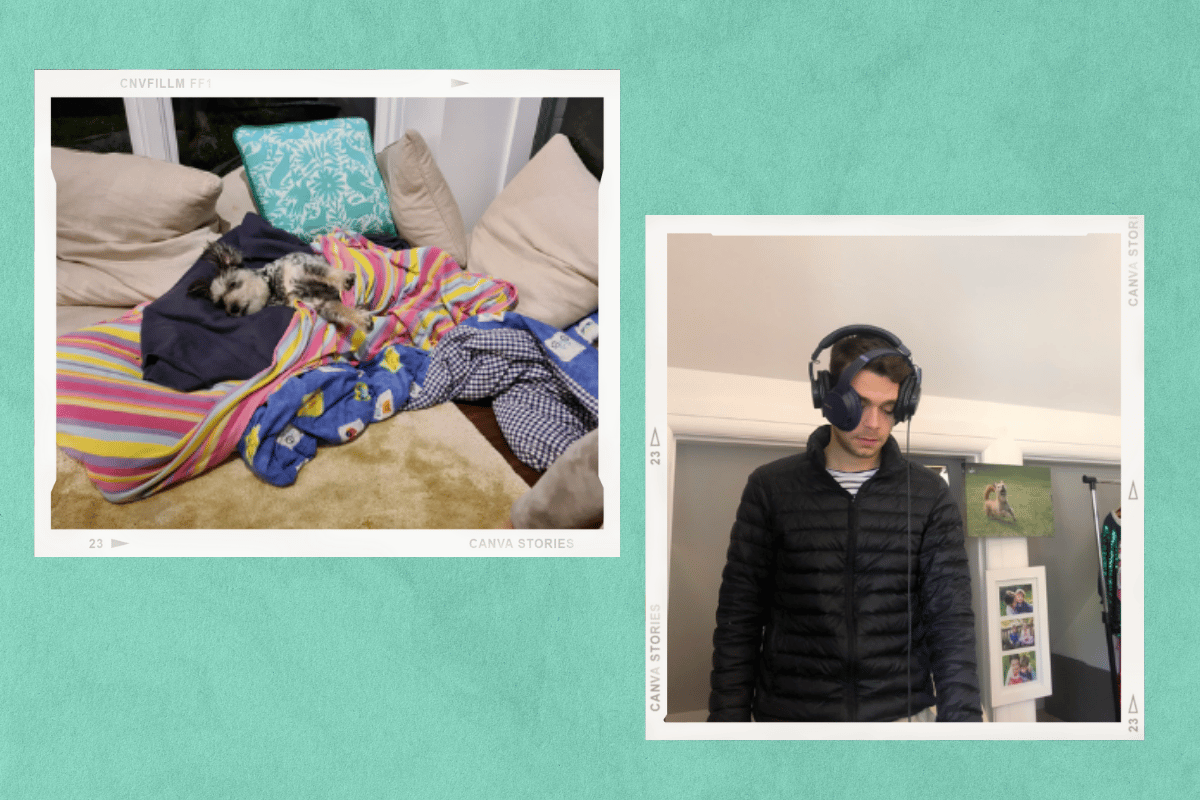 For six months in 2020, I moved in with my boyfriend’s family.

My boyfriend’s family also happened to include the CEO of the business I work for, his dad, and the founder of Mamamia and Creative Lead, his mum, Mia Freedman. You might have heard of her.

I remember jumping into bed one night and thinking: F*ck… it’s going to be hard to chuck a sickie.

If you listen to Mamamia Out Loud you will know a little bit about this period. Mia and I were recording the podcast from the same house, which made our third co-host, Holly Wainwright, very jealous. She was trapped in her apartment with two kids, a dog and a husband, and to this day she can barely talk about it. Too triggering.

There’s a list of reasons why it made sense for me to move in. I was living in a tiny inner-city apartment with my sister and her partner, with no study or desk set up, and every time someone had to take a call we’d all start yelling. The way lockdown was going, it also looked like it wouldn’t be too long before I couldn’t see Luca (my boyfriend) at all, unless we were in the same ‘bubble’.

And so, I packed a small suitcase, with my laptop under my arm, and moved in.

We never had any sense of how long it would be. A week maybe. Then perhaps a month. It turned into six.

Mia and the kids set up a desk for me next to Luca’s, and Mia lent me a bunch of storage so I had somewhere to keep my toiletries in Luca’s bathroom. The serums she whispered between gritted teeth. They need a place.

We also ripped out the podcast studio from our office (I say ‘we’. By that I mean I watched as Mia and Luca did it) and installed it in Mia’s office. Luca was once a podcast producer, and so set up a bunch of our records and only once we lost the entire episode, which was 100% Mia’s fault. But I digress. 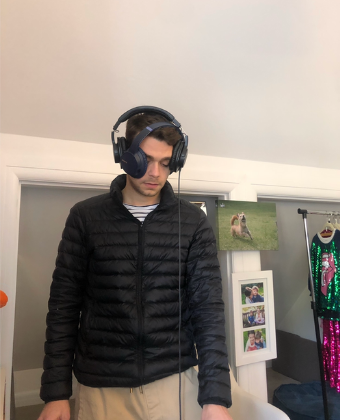 So what was it like living with my boyfriend’s family?

I’m very sorry because I think my answer might be a letdown.

Dinner was always exciting because we got to hear about everyone’s days. And we got takeaway. A lot. Which I thoroughly enjoyed.

Remy, Luca’s little brother, made a fort at one stage, which then turned into the Covid Corner. It was a corner of the house covered in cushions and blankets and at least one sleeping dog. I worked from there a lot and wrote a bunch of my book in that little nook. 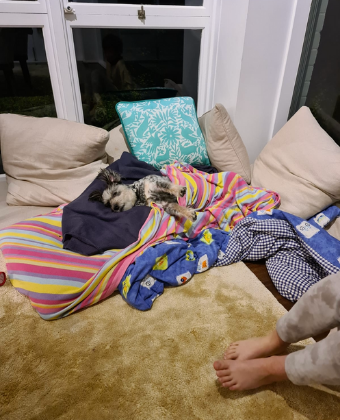 We had a lockdown leaderboard, where we ranked people in terms of their general contribution to the household. I think we got the idea of Tik Tok. No one could really rank me last (even though I objectively contributed the least) because that would be rude to the house guest, so I normally beat Mia. Luca was always at the top because he can cook. One of the dogs was towards the bottom if they’d, for example, gone through an Uber Eats bag when they thought no one was watching.

Mia bought Easter eggs a few days before Easter and hid them, which was bullshit because myself, Remy and Coco wanted the eggs… now. I sent Coco into Mia’s room where I thought she’d hid them. She found them. We then determined a new hiding place where we ate them for the next few days. I don’t think Mia ever realised…. And then we had an Easter egg hunt on the Sunday where we got more eggs. It made spending my first Easter away from my family more bearable.

When it became horrifically obvious how little I was contributing to the household, I’d order ice cream for dessert, and smile while everyone made a big fuss. Honestly, I got away with doing very, very little.

If I hadn’t been welcomed into Luca’s family home during the 2020 lockdown, I don’t know how I would have coped. For the first time since I’d moved out of my own family home five years prior, I felt like I was part of a family again. We brought out the best in each other. There was routine and laughter. Enough of us to keep things interesting, but not too many it was crowded. There’s no way I would have written my book anywhere else. I didn’t get stuck in my head because I was accountable to people. I was engaged. The 2020 lockdown also had a different energy in Sydney. It was still a novelty. We all slowed down. The rest of the world was in the same boat. This 2021 lockdown is a different experience entirely.

What people might not know about Mia is that she is sickeningly generous. I was never, for a moment, made to feel like a liability, or like I got in the way. To be honest, it just felt like home. With my family.

It was a time we knew was very special, even as we were living it.