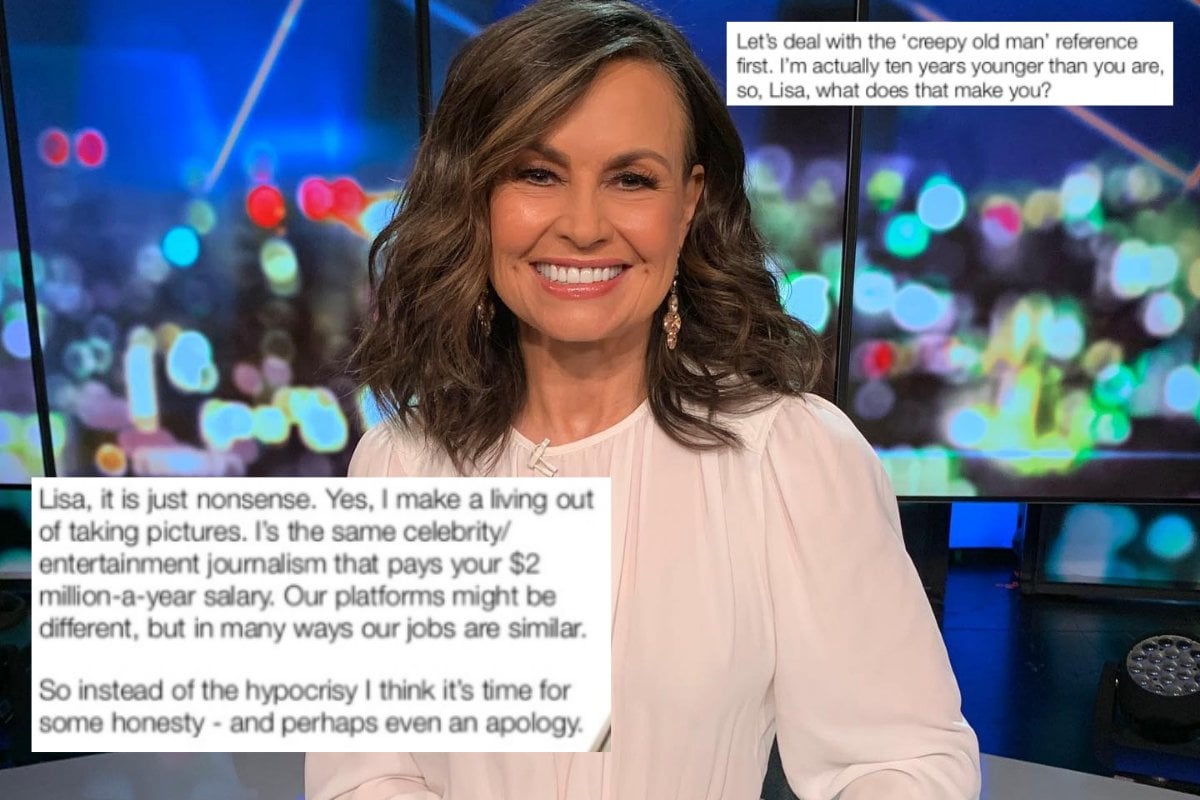 This past week we got a masterclass in all the excuses paparazzi use to justify their existence.

Straight from the horse's mouth, in fact.

On Thursday, on a blog that Mamamia will not encourage with a link, the photographer who stood outside the Melbourne restaurant - by his own admission, out of sight - and photographed Lisa Wilkinson eating wrote her an Open Letter.

Need to catch up? Here goes:

Calling out The Daily Mail for being problematic is not a productive exercise.

It’s like complaining that your sieve has holes in it.

It’s kind of the point.

Nobody goes to the Mail for anything other than the most salacious take on any topic you choose, from the war in Ukraine to what Dom from MAFS wore to the supermarket. And gossip. Lots and lots of gossip.

Celebrity gossip magazines have largely disappeared - but the appetite to know other people’s business has not. It just changed locations. And the Daily Mail’s “Sidebar Of Shame” has been where we go to indulge. And gossip is, ultimately, problematic. It feels great, but it almost always comes at someone else's expense.

In an era of fourth-wave feminism where we are hyper-aware of self-determination and consent, we are wrestling hard with the ethics of gossip. On one hand, we know the way women are portrayed by sites like The Mail is always one-dimensional, often damaging and untrue.

On the other, we are still social animals who trade information for status, we still enjoy rubber-necking at other people's lives and, after a decade or so of air-brushed Instagram perfection, nosying behind the filters and facetune has never been more appealing.

Demand, meet supply. And so we're at the Daily Mail. And the sieve.

But the things we click on matter. And this past week, a story blew up and out of the Sidebar of Shame that illustrates the ethical battleground of the Mail, gossip and the paparazzi economy perfectly.

I don't want to alarm you, but.

Lisa Wilkinson went out to dinner.

And ordered a drink.

The newsworthiness knows no bounds. A grown-up woman answers emails while eating broccoli and drinking a margarita.

The legendary journalist was not kissing someone else's husband. She was not shaving her legs at the table. She was not throwing things at the waitstaff or loudly badmouthing famous colleagues.

She was sitting, and eating. And working.

And the Daily Mail ran the pictures, along with a story describing the photos, and suggested that "Lisa Wilkinson cut a lonely figure..." and Lisa Wilkinson was annoyed.