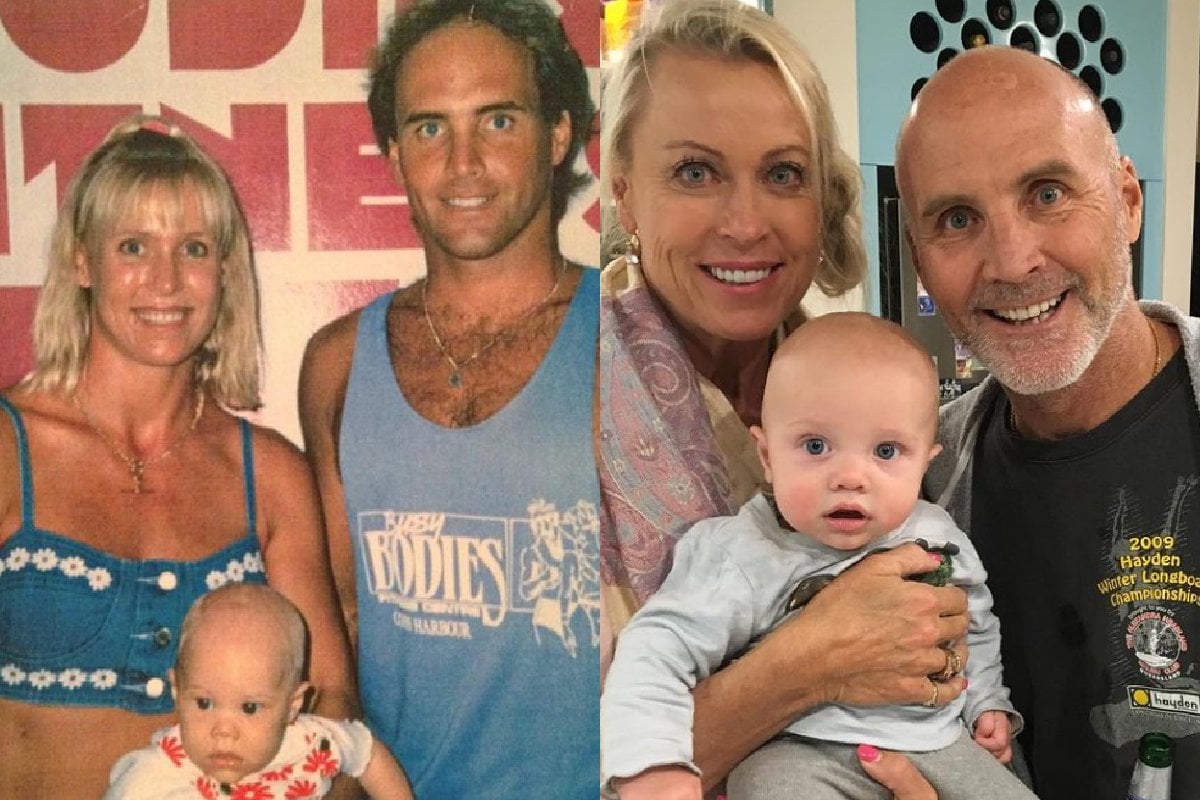 This post deals with disordered eating and alcoholism, and may be triggering for some readers.

Lisa Curry and Grant Kenny were Australia's golden couple for over 20 years.

But near the end of their 28-year relationship, Lisa started to feel stuck in a 'Groundhog Day' existence. She wanted more - to see the world and explore, but this was something that Grant didn't see for himself.

Speaking to Mia Freedman on Mamamia's No Filter podcast, Lisa said it was a camping trip that made her realise she wasn't happy in her marriage anymore.

The couple met in the 1980s at the height of their careers. They married in 1986 and had three children - Jaimi Lee, Morgan and Jett Kenny.

At the time of their separation, their two daughters were in their 20s and Jett was 14. And calling time on the relationship was hard in itself.

Listen to Mia Freedman's full interview with Lisa Curry on the No Filter podcast below. Post continues after audio.

"We could have probably separated years before that. And you make all the reasons why you shouldn't separate about everyone else," she said. "Sometimes we hang in there because we're happy enough. But is being 'happy enough' what you really want? And is it enough?"

"There were so many things I wanted to do in my life," Lisa said. "I love travelling, I love adventures and Grant hates all that sort of stuff. He's a homebody."

Their first (and last) camping trip was a revelation of sorts for Lisa. They camped near the edge of the Great Australian Bite and Lisa loved the stars in the night sky, and the big sunrises. Grant, on the other hand, hated the freezing cold and the gusts of wind.

"There were a few things [that were issues in the relationship]. And then when those few things are combined with other things, and more things, you think 'I'm kind of hanging in for all of the wrong reasons'. There wasn't one thing in particular - and it wasn't easy. And we talked about it a lot, and cried about it together," Lisa shared.

There were also times she wondered if they had done the wrong thing in splitting up. Could they have worked harder at the relationship, because it wasn't that bad? But Lisa felt stuck. Things were monotonous, and she wanted more.

"You just know deep down that even though you love the person, you're probably better off not being together. And you can just love yourself and your life. As Jaimi used to say to me - 'you're such a better mum when you're not with dad'. Probably because I was happier and free."

Of course, delivering the separation news to their three kids was difficult. Lisa had decided to move out of the family home and start a new chapter for herself. And interestingly, each of the three kids reacted in different ways.

"Jett, the youngest, was pretty easygoing. He was only 14. Morgan, my middle child, was shocked but not surprised. And Jaimi was devastated because her family unit had fallen apart. It affected her more than the other kids."

In the months after the separation, Lisa and Grant were on good terms. But others were trying to tell a different story.

"Grant was a reluctant celebrity, and he didn't like the attention. He was pushed into the public eye and he really didn't want to be there. It was hard to watch him struggle with s**t stories that were written about him and things that aren't true. Grant hates media. He detests anything about it. Whereas my job with Uncle Toby's and other companies where I was always talking with the public, I was more at ease. But he just didn't like it at all," Lisa reflected on No Filter.

And in those years after the separation, magazines were lapping up the split. The amount of covers dedicated to either Lisa or Grant increased, as did the prices of stories and interviews with either party involved.

But regardless of the stress and having their personal lives become tabloid fodder, Lisa knew it had been the right decision for both of them to split. And they were happier.

"I felt like I lost my identity when I married Grant because I wanted to take his name of course so I became 'Lisa Kenny'. Then I realised no one had a clue who 'Lisa Kenny' was. That's when I went back to Lisa Curry, but alas people still called me Lisa Curry Kenny," she said. "But we're still really good friends, which is great."

Since then, the whole blended family have remained very close.

Lisa and Grant needed to be on good terms too, because they were both trying to help their eldest daughter Jaimi, who was struggling. Jaimi sadly died from complications with disordered eating and alcoholism in September 2020. When Jaimi passed, it brought Lisa, Grant and their whole family unit together in grief.

"It shows the relationship that Grant and I have had and do still have - you don't live with someone for 28 years and just disregard them. People often find it interesting that you can stay friends. We just are," she said.

Read more: "It was like a toxic beast." Lisa Curry on her daughter Jaimi’s addiction.

The exes also share two grandchildren together with another one on the way, thanks to their daughter Morgan.

As for what the future holds at the moment, Lisa told No Filter that she takes things day by day, given the heartache her family have experienced.

"I struggle every day. I know that I have a wonderful husband in Mark, and he's always with me. And Grant doesn't have anyone with him, and that saddens me. That's why Morgan, Jett and I are looking after him," she said.

Lisa by Lisa Curry is published by Harper Collins and is available now.

Listen to the bonus episode of No Filter where Mia Freedman and Lisa Curry talk about why Lisa decided to share her story. Exclusive to Mamamia subscribers, listen here.

B
beachhouse84 4 days ago

Reply
Upvote
Not the point if the article at all but Re the comment about staying friends with your ex:
having two ex husbands  (one I’m friends with and one I’m not) I know from experience that it’s possible to stay friends and be civil if both people are decent human beings and just act respectfully.
it’s a choice about how you treat the other person.
News
General
Opinion
True Crime
Politics
Sport
Explainer
Entertainment
Celebrity
Reality TV
Movies
TV
Books
Rogue
Royal
Lifestyle
Beauty
Fashion
Weddings
Home
Wellness
Health
Fitness
Travel
Food
Parents
Before The Bump
Pregnancy
Baby
Kids
Teens
School
Parent Opinion
Work & Money
Money
Finance
Career
Lady Startup
Relationships
Sex
Dating
Separation
Friendship
Family
Real Life
Couples