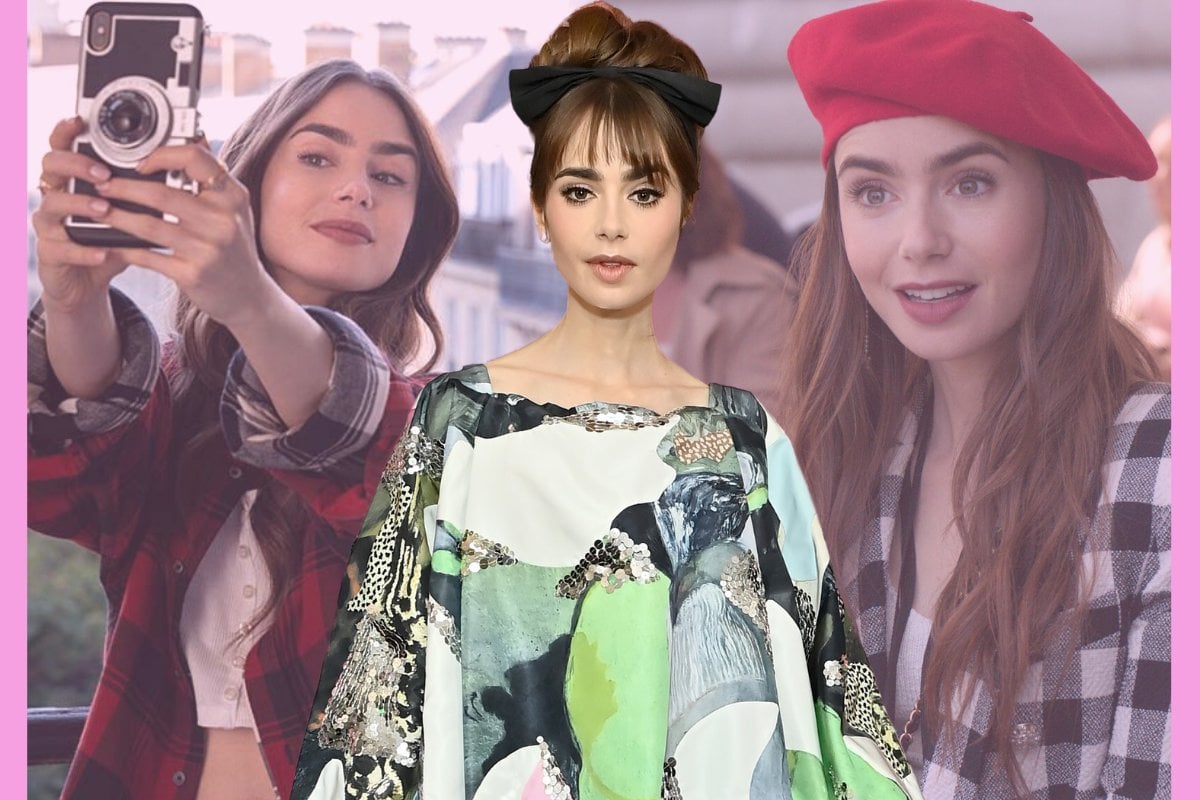 This article deals with the topic of eating disorders and may be triggering for some readers.

Lily Collins has spent her entire life around cameras. The 32-year-old has been living in the spotlight since her birth and starred in her first on-screen role at the age of just two.

Even though she comes from a famous family, her father the one and only Phil Collins, the actress has been able to make a name for herself in the film industry.

But it was her role in Netflix's Emily in Paris that raised eyebrows last year: some labelling the show the guilty pleasure needed in 2020, others criticising the show's outdated tropes and stereotypes.

This week, the second series of Emily In Paris has been released, so we thought it perfect timing to unpack the life of Lily Collins.

Born in Surrey, England, to musician Phil Collins and his second wife, American Jill Tavelman, Collins' appeared in the BBC series Growing Pains, when she was a toddler.

Her parents split in 1994, and she moved with her mother to Los Angeles where she spent most of her childhood.

As a teenager, Collins had dreams of being on camera in a different capacity. She studied broadcast journalism at the University of Southern California and wrote for Seventeen, Teen Vogue and the Los Angeles Times, and had her own column 'NY Confidential' in British magazine Elle Girl. In 2008 she reported on the U.S. presidential election for Nickelodeon.

She began modelling, and in 2007 was selected by Chanel to wear one of their gowns at the 2007 Bal des débutantes at the Hôtel de Crillon in Paris, which was featured on season three of the reality television series The Hills.

In 2008, Spain's Glamour magazine named her its International Model of the Year. In 2009, Collins returned to acting with her adult debut in two episodes of 90210 and the Oscar-nominated film The Blind Side, alongside Sandra Bullock.

Insistent on carving her own path, Collins starred in a number of films from 2011 including Mirror Mirror, Stuck in Love and Love, Rosie.

"I got told 'no' so many times," she told Momtastic about her struggle to make it. "People told me I was too green or wasn't as seasoned yet." 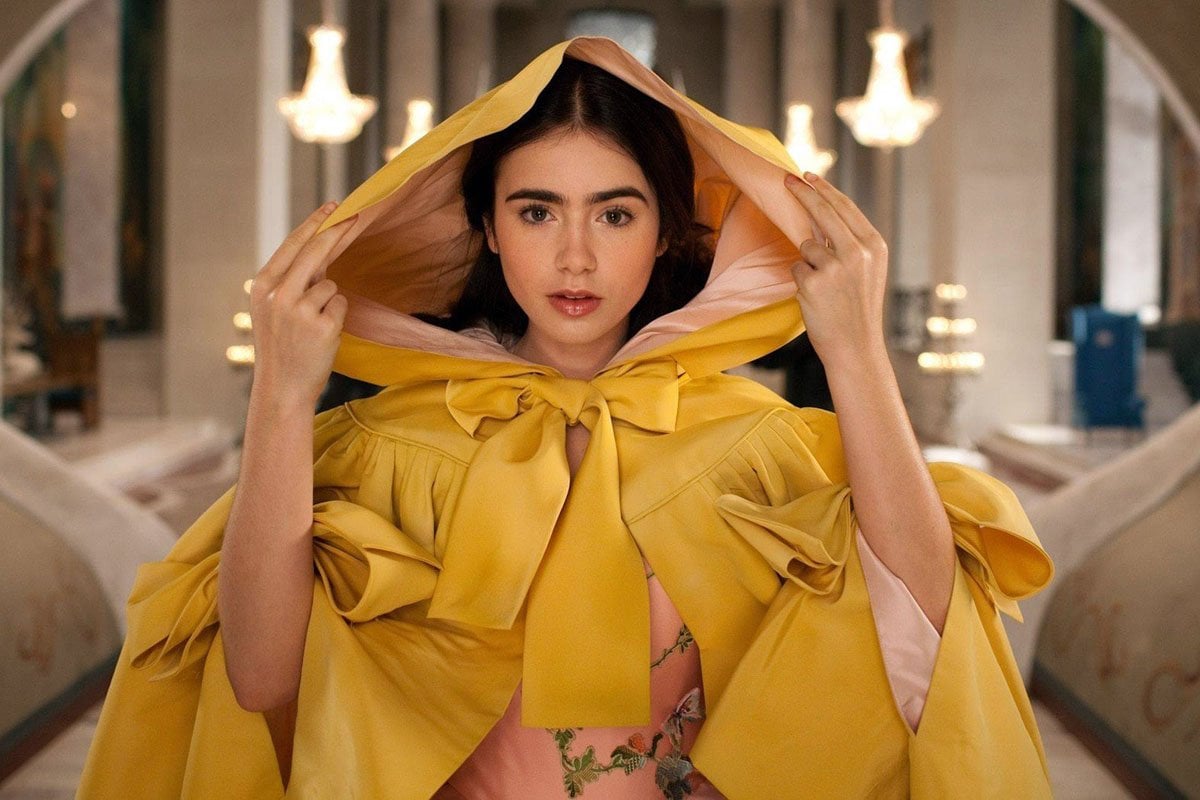 Lily Collins in Mirror Mirror. Image: Relativity Media. In 2017, Collins stared in To the Bone about a young woman with anorexia. She released her book, Unfiltered: No Shame, No Regrets, Just Me, the same year documenting her own journey with an eating disorder.

"When I wrote my book last year, I wrote a chapter on eating disorders a week before I got this script [for To the Bone]," Collins told Vanity Fair. "It really felt like the universe was saying, 'This is either something you need to address yourself, or something you need to bring to new people. It's a conversation that you need to help start among young people - males and females - because it is becoming more and more prevalent for both now'."

As a 16-year-old, Collins was trying to balance her dreams of modelling and acting, along with the stress that came from her dad's divorce from his third wife, Orianne Cevey.

"My life fell out of control. I couldn't handle the pain and confusion surrounding my dad's divorce, and I was having a hard time balancing being a teenager with pursuing two different grown-up careers – both of which I'd chosen myself, but which also focused heavily on how I looked," she told The Sun. 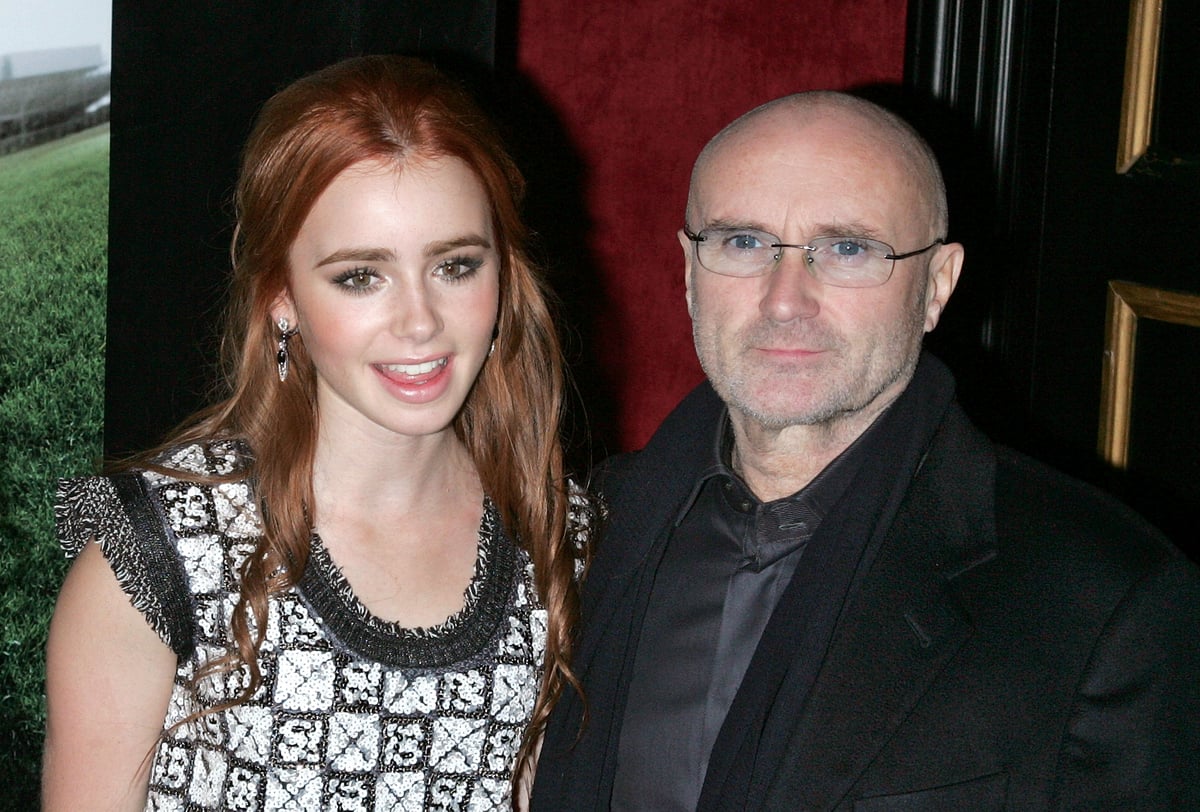 She explained further to Harper's Bazaar:

"When I was younger, I wanted to reach this image of what I thought perfection was and I equated that with, well, with what you see in the media; you think body shape has to a lot do with being perfect.

"I wanted to control how I got there. At that time, I was dealing with high school and relationships, and you're very out of control at that stage in your life. How do you feel in control? Well, I controlled how I ate and looked. Then, as I grew older, I realised that perfection doesn't exist and my priorities have shifted because I want a family one day. I don't want these self-imposed issues to affect whether or not I can have kids – because the reality is you can't have children when you're ill like that."

Collins had enjoyed a steady career for many years, but come 2018-2019, things really picked up.

During this time, she starred in the Les Misérables miniseries, the Ted Bundy biopic Extremely Wicked, Shockingly Evil and Vile and Tolkien, and the biographical film about Lord of the Rings author J. R. R. Tolkien. 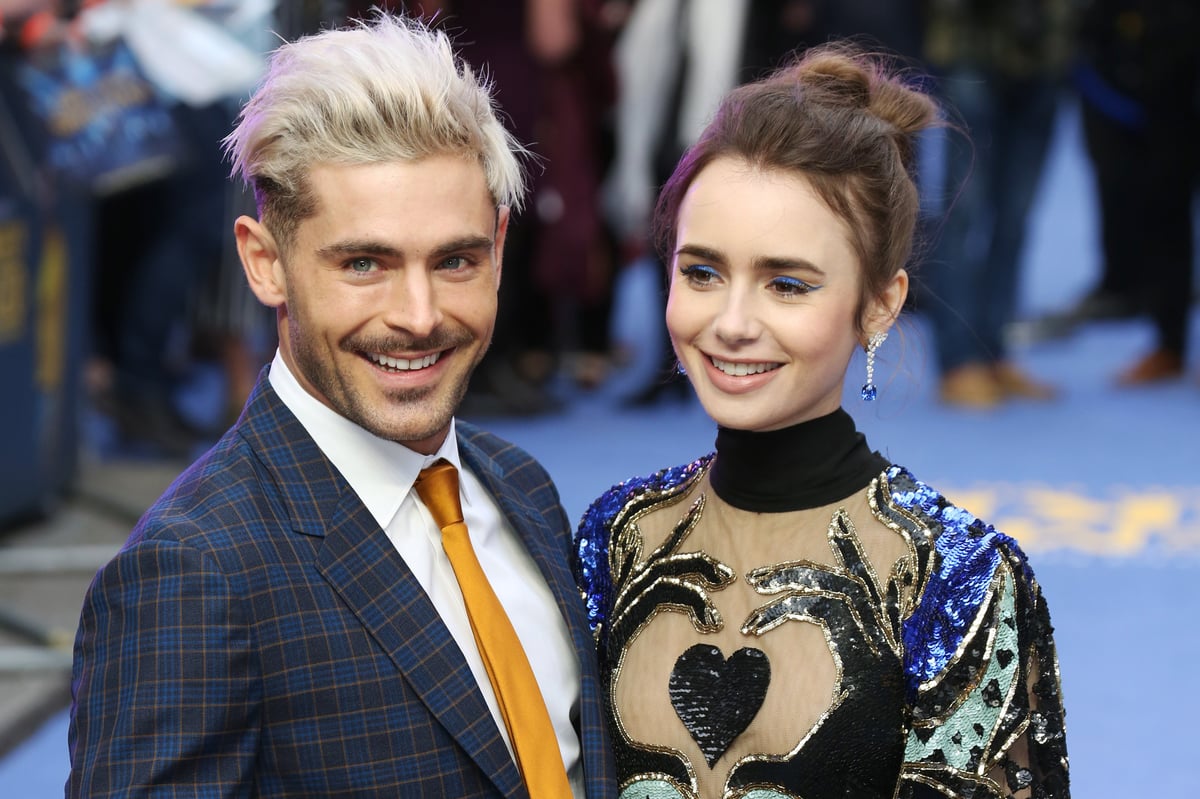 Image: Getty. Lily Collins on her relationship with her father.

In 2019, Collins told The Guardian she was told she could "have other ways in" to the industry thanks to her famous last name, but she never wanted to give anyone the opportunity to doubt her hard work.

"I knew it would take longer to do it on my own, but it would be so much more worth it," she said.

"Someone told me they were listening to the radio and they were playing classic hits," she recalled to The Sun in 2019.

"At the end the DJ said, 'For all of you who don't know, that was Phil Collins - Lily Collins' dad'.

"That was the weirdest thing, just so bizarre. Even my dad has said to me, 'You know, I am known as your dad now'."

Listen to Mamamia Out Loud unpack Emily In Paris. Post continues after podcast.

Throughout her career, Collins has kept her personal life private.

In 2013, she stated she doesn't like to discuss her relationships publicly as she recalled the role the media and the internet played in her parents' divorce.

But we know she dated stuntman Riley Harper from August 2009 to September 2010, before several co-stars.

She dated her Abduction co-star Taylor Lautner in 2010/2011, as confirmed by another co-star Denzel Whitaker. 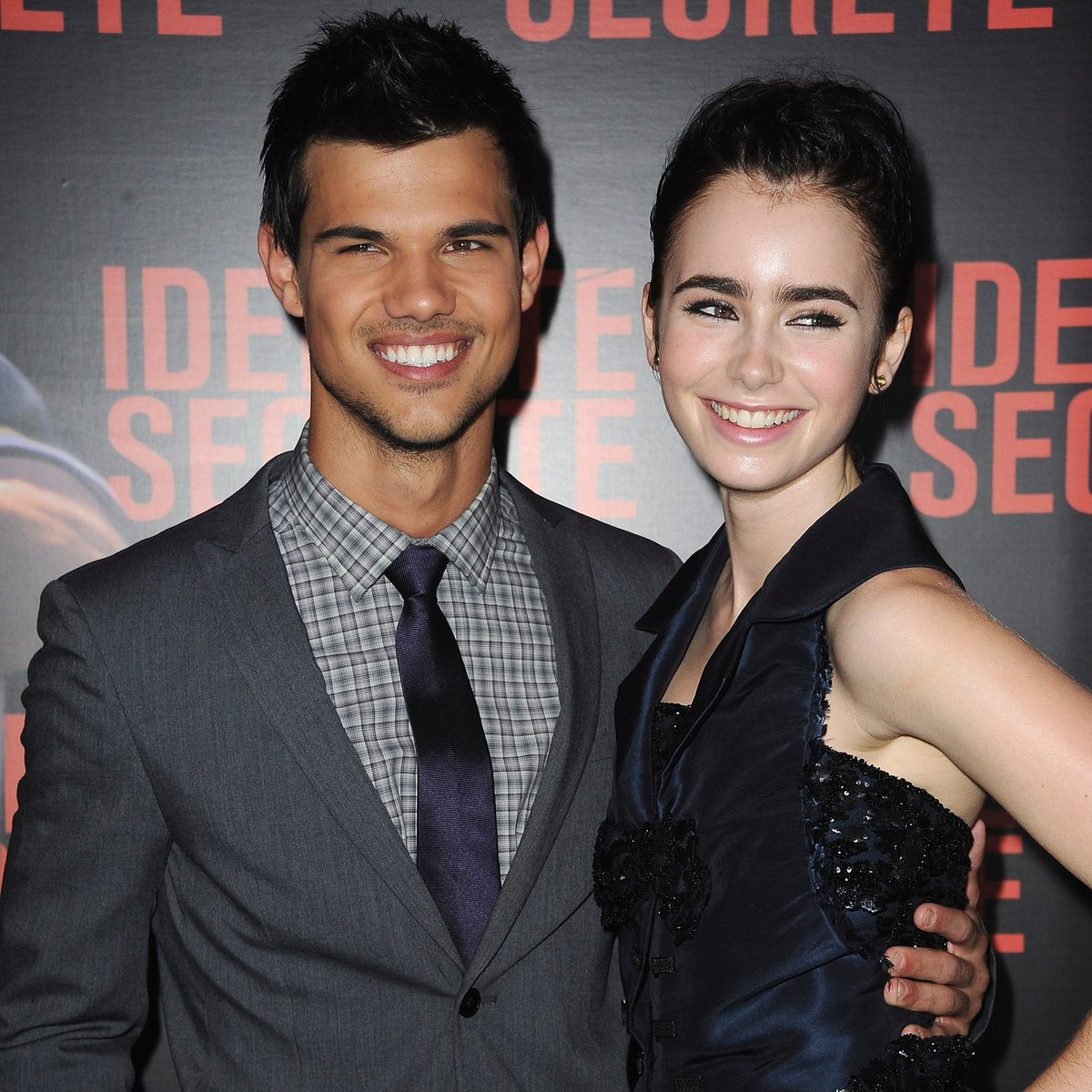 Taylor Lautner and Lily Collins. Image: Getty. She was then spotted on a number of dates with Zac Efron in 2012 and 2013, and although they never confirmed a relationship, they remained close friends afterwards.

In 2019, they starred in Extremely Wicked, Shockingly Evil and Vile together.

"I used to do reporting for Nickelodeon, so I literally interviewed him at an orange carpet event years ago. We've been friends ever since, so we finally got to work together," Collins told E! News.

She dated Jamie Campbell Bower, her The Mortal Instrument co-star in 2013 before they went their separate ways. During this time, she went on a few dates with Chris Evans. 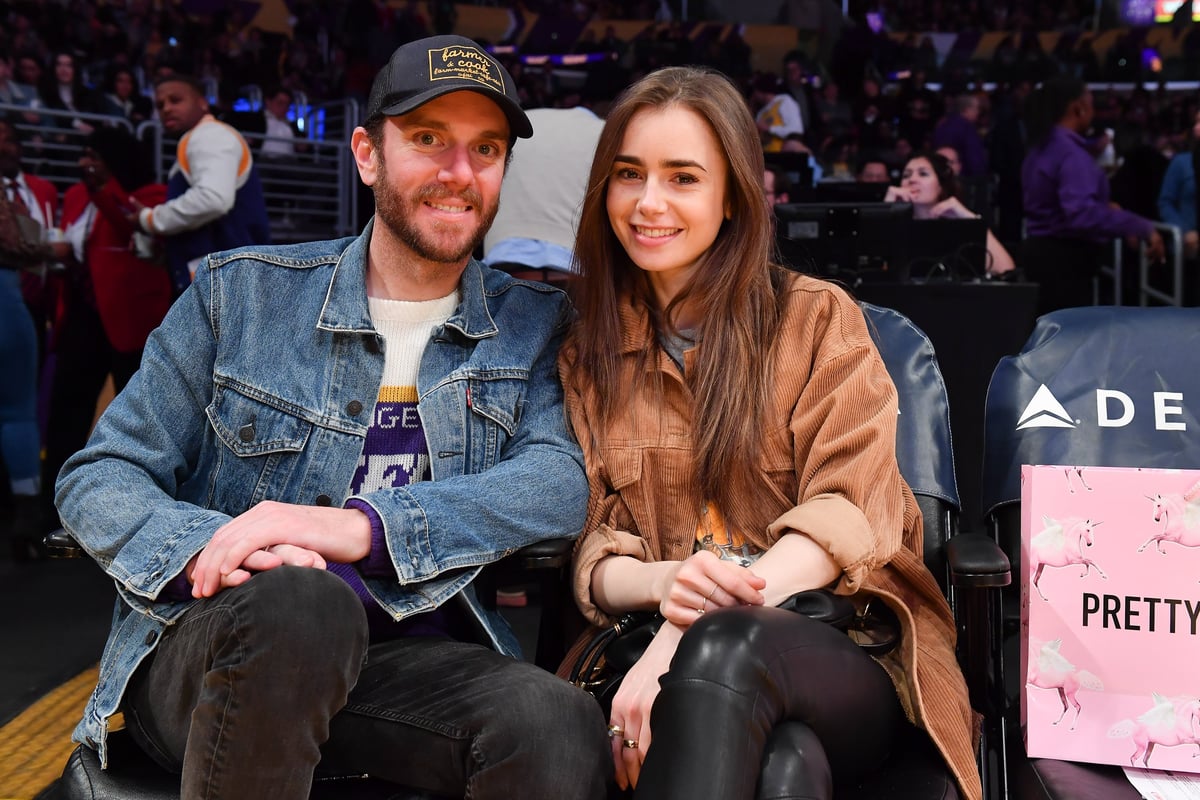 McDowell and Collins in January 2020. Image: Getty. In 2019, she began dating director and writer Charlie McDowell and the two could definitely relate to the unique experience of growing up with famous parents.

He is the son of English actor Malcolm McDowell and American actress Mary Steenburgen, and Ted Danson is his stepfather.

The couple became Insta official in July 2019, and a couple of months later it was announced Collins will star in Gilded Rage, a film directed by McDowell and produced by Jake Gyllenhaal.

On September 26, 2020, the couple announced their engagement with Instagram posts.

"I've been waiting my life for you and I can't wait to spend our life together..." Collins captioned photos of the couple and her ring.

McDowell, 37, captioned his post: "In a time of uncertainty and darkness, you have illuminated my life. I will forever cherish my adventure with you."

On Live with Kelly and Ryan, Collins said she knew she wanted to marry McDowell from the moment she met him.

"I was very surprised as to when and where it would happen, but it was one of those situations where I knew the second that I met him that I wanted to be his wife one day," Collins said.

"So, it was just a matter of when really."

Appearing on The Drew Barrymore Show during her Emily in Paris media tour, Collins said she was the happiest she'd ever been.

"I am the luckiest. I am so grateful and I just truly feel like the happiest I've ever been. I am very, very lucky."

In September 2021, Collins tied the knot to McDowell. In the beautiful photos, taken by Cedar and Pines Photography, she can be seen wearing an intricate lace gown and matching cape by Ralph Lauren.

It was something a little different, but every bit as elegant and timeless as we'd expect from the fashion-forward star. Behold...

Lily Collins and Emily In Paris.

Netflix's Emily in Paris follows the life of main character, Emily Cooper, who is an American social media strategist from Chicago who, through a twist of fate only found in a rom-com, is unexpectantly transferred to a job in Paris and finds herself living a new adventurous life in the city of love.

...Despite the fact she does not speak French.

Prior to the release of the 10-part series last year, it was widely hyped as the new Sex and the City, given it stemmed from the same creator, Darren Star, the same stylist, Patricia Field, and the fact it follows a woman running around a city in a pair of heels that are astronomically expensive.

But the show didn't exactly receive as warm of a welcome compared to Sex and the City.

The show's first season received some backlash from viewers, suggesting the show fell into predictable rom-com tropes and was overall quite problematic towards French culture.

Essentially, Emily In Paris was seen to be appropriative and promoting ignorant stereotypes about French people.

"As disheartening as it sometimes is to read these things, it’s also a gift: you're being allowed to improve," Collins told Vogue Arabia about the division.

But it is fair to point out, that even among the justifiable criticism, Emily In Paris became one of the most-watched shows on Netflix. Perhaps it was because the show was sugary and sweet: a type of escapism that many viewers leaned into amid the stressful reality that was 2020. 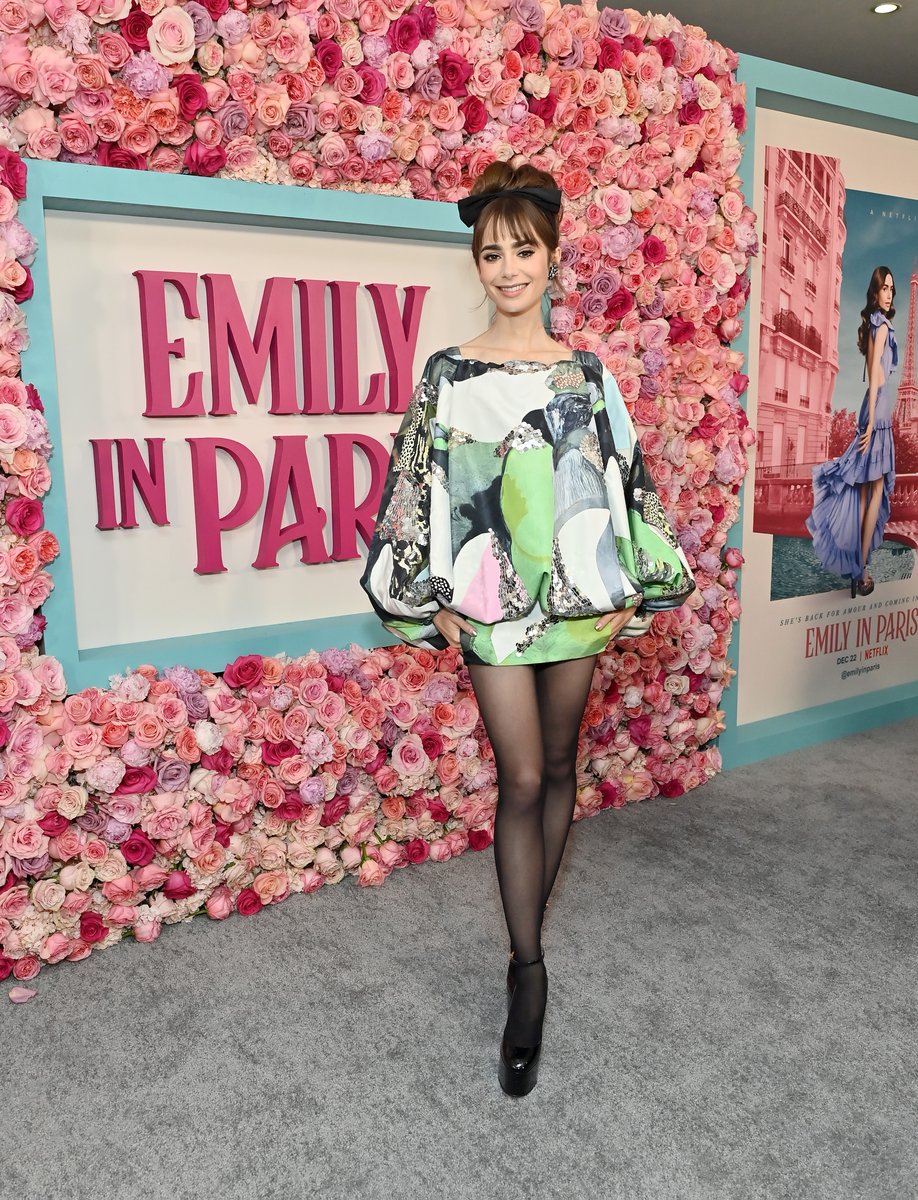 Lily Collins at the premiere of Emily In Paris season two. Image: Getty. So fast forward a year, and the second series of Emily In Paris is out now. Available from Wednesday, the series has a lot of hype around it, with Collins in promotion mode this week at plenty of press events.

Time will tell as to whether the second series is just as widely watched, and hopefully better received, than the first.

Reply
Upvote
@gu3st how do you mean?
G
gu3st a year ago

Reply
Upvote
@rush I was trying to wryly understate it.
I think that there's no point pursuing an engagement where fidelity didn't even last a month, not someone whom I'd marry. To move from the high of engagement to relationship-ending and internationally public humiliation, in just over three weeks, would be devastating.
R
rush a year ago

Reply
Upvote
@gu3st wait a second, I think you might be confusing your Lilys here! The one caught having the "affair" with Dominic West was Lily James, this one is Lily Collins! (Unless I'm completely missing something in the article?)
G
gu3st a year ago