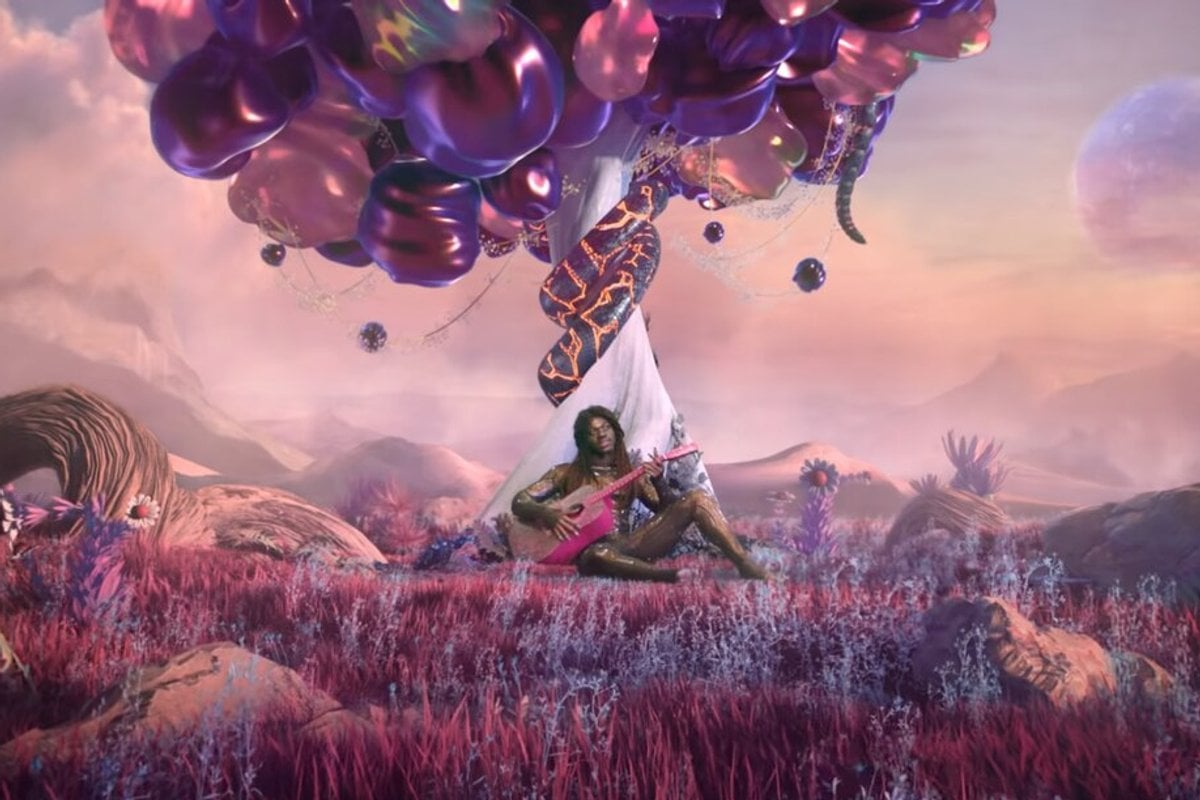 Lil Nas X's new song is dedicated to his younger self; a young teenager, grappling with his sexuality and scared about what people would say.

"Dear 14-year-old Montero, I wrote a song with our name in it. It's about a guy I met last summer," he wrote in a letter shared on social media.

The musician, best known for his viral 2019 hit 'Old Town Road', went on to write that he was scared of the reaction the song and its video would garner.

"This is very scary for me, people will be angry, they will say I'm pushing an agenda," he said.

"But the truth is, I am. The agenda to make people stay the f*** out of other people's lives and stop dictating who they should be."

'Montero (Call Me By Your Name)' sees Lil Nas X, whose real name is Montero, sing about having a relationship with a closeted guy. In the music video, he plays various Biblical-inspired characters, including Adam and the snake in the Garden of Eden.

After being stoned to death, he dances down a pole to hell, where he meets Satan atop his throne which is surrounded by Greek words that mean: "They condemn what they do not understand".

He gives Satan a lap dance before killing him and then crowns himself with Satan's horns.

According to a press release accompanying the video, the final scene represents "dismantling the throne of judgement and punishment that has kept many of us from embracing our true selves out of fear".

Lil Nas X was correct with the letter to his younger self: people were mad. They did accuse him of pushing 'an agenda'.

Think back to mid-2020, when Cardi B and Megan Thee Stallion released 'WAP', and later that same year when Harry Styles wore a dress on the cover of Vogue. 'Montero' has garnered controversy like both of those combined, with added fury because Lil Nas X dares to be an openly gay Black man.

Conservative commentators and religious figures have strongly condemned the video, screaming 'think of the children'.

there was no system involved. i made the decision to create the music video. i am an adult. i am not gonna spend my entire career trying to cater to your children. that is your job. https://t.co/SzjjYe2tf4

i spent my entire teenage years hating myself because of the shit y’all preached would happen to me because i was gay. so i hope u are mad, stay mad, feel the same anger you teach us to have towards ourselves.

there is a mass shooting every week that our government does nothing to stop. me sliding down a cgi pole isn’t what’s destroying society. https://t.co/H21SMVnfNQ

Things ramped up when Lil Nas X announced custom 'Satan Nikes'. Snopes did some digging and found the shoes are legit, but they're the work of a company called MSCHF, which specialises in troll products.

All of the outrage played right into their hands.

He's fought with the governor of South Dakota, who has spent a lot of time tweeting about Lil Nas X, and major conservative figures like Candace Owen.

Right-wing paster Greg Locke went viral for preaching about the controversy. The most telling part of the rant is where Locke admitted he actually had no idea who Lil Nas X was, but called him a 'thug'.

Right-wing pastor Greg Locke is not a fan of Lil Nas X (apologies for the quality of the video - the livestream of Locke's service today was glitchy.) pic.twitter.com/CJ3DSUuqth

The problem for these conservative voices is that Lil Nas X knew this would happen, and he's armed with the greatest defence: He simply doesn't care.

While one side of the internet clutches its pearls, another side is celebrating.

Queer activists and commentators have pointed out what Lil Nas X's message means for the community.

"I don't think it's possible for me, a 41-year-old gay man, to overstate just how monumental it was to see a 21-year-old gay man express his sexuality on exactly the same terms - and at the same level of fame, success and media attention - his straight counterparts have enjoyed for decades," Adam B Vary wrote for Variety.

"Instead, historically, gay men who'd reached a similar career pinnacle at roughly the same age have either had to stay in the closet and sing about women — see: New Kids on the Block's Jonathan Knight, NSYNC's Lance Bass, Ricky Martin — or come out after establishing themselves and keep their sexuality in vaguely PG territory (if that). See: Elton John, George Michael, Michael Stipe, Mika and, again, Ricky Martin."

Vary wrote it was a new era for Queer artists, giving anyone who follows in Lil Nas X's footsteps permission to express themselves in a way not afforded to artists before him.

Lil Nas’ music video literally portrayed the fact that he isn’t bothered with the idea of going to hell if it means that he gets to accept who he is and his sexuality.

All y’all saying our bro Nas pushing a “gay agenda” been protected by a straight agenda your whole life. Nothing makes us happier than seeing our brother be fully himself and we gonna stand beside that for life ❤️

The church tells LGBTQ people that they belong in hell but are upset when lil nas x chooses to depict hell as a cite of Queer eroticism. Make it make sense.

Lil Nas X grew up surrounded by the church - his dad is a gospel singer - and the video is clearly a commentary on the negative experiences Queer people can have in environments which don't accept them.

like... this is not even about you? it’s not about how you feel or the perceived disrespect, it’s about queer people and how their identities have been incessantly dissected, dismissed and condemned in the name of Jesus

getting called a d*ke in church really messed w my psyche as a kid so i’m fucking thrilled lil nas x is out here getting nasty with the devil and giving every rigid homophobic christian a blood clot.

Since Lil Nas X grew up in the church, I'm sure he's well aware that when religious leaders flip out over people being too unapologetically gay, queer kids who are listening aren't just hearing the hate, they're also learning there's people out there existing w/o guilt or shame.

Despite what some may say, 'Montero' will not lead to the end of civilisation.

But to those who need it most - who are struggling with their identity of feeling shunned by their community because of their identity - it may change everything.

We're all talking about it. The 'Montero' video has garnered nearly 30 million views in less than three days.

If they looked a little closer, they'd see they're being played.

The devil's always in the details.

Reply
Upvote
With the disclaimer that I've never ever heard of this guy and that nothing in this story convinced me to watch his video...
Is his target audience children? If so, they're highly unlikely to understand the nuance he seems to think his video is communicating and it seems a bit confusing - as though he's going to hell because he's gay and then he sits in judgement on all who are down there.
Wouldn't the story make a bit more sense if he were staging a takeover of heaven?
R
rush a year ago

Reply
Upvote
1 upvotes
@katp he's a musician like any other, not a kids entertainer. He's just the latest target of the Helen Lovejoy "won't somebody please think of the children" crowd. In the eighties it was Twisted Sister and heavy metal. Before that, it was the Beatles, before them, Elvis, before him, it was jazz that was going to corrupt children and turn them all into drug fiends. I'd bet if you went back far enough, parents probably objected to Beethoven, or whoever was the medieval mandolin-playing  equivalent of Jimi Hendrix!
K
katp a year ago

Reply
Upvote
@rush So teenagers rather than children? I'm still not sold on the plot line. I'll email him and let him know I'm available for bouncing future video clip stories off for the purposes of coherence.
R
rush a year ago

Reply
Upvote
@katp 😄 I get where he's coming from, kind of "if you're going to send me to hell for my sexuality, I might as well lean into it and take over the damn place"!
C
cat a year ago

Reply
Upvote
@rush Mozart was literally considered to be incredibly racy, it was scandalous that Marie Antoinette had him play at her court.
M
mamamia-user-228828311 a year ago

Reply
Upvote
Would you show this film clip to your toddlers and children?
R
rush a year ago

Reply
Upvote
1 upvotes
@mamamia-user-228828311 that's exactly his point, it's up to the parents to be aware of what their children are watching.
F
fightofyourlife a year ago

Reply
Upvote
5 upvotes
@mamamia-user-228828311 No but I'm not sure what that has to do with anything. There's a lot of media I wouldn't show to young children. It doesn't mean that media shouldn't exist. It means it's my job as a carer to those children to minimise/eliminate their exposure to it.
C
cat a year ago

Reply
Upvote
6 upvotes
@mamamia-user-228828311  are you in the habit of sitting toddlers down and playing them film clips? The nightly news? horror movies?
S
smart cookie a year ago