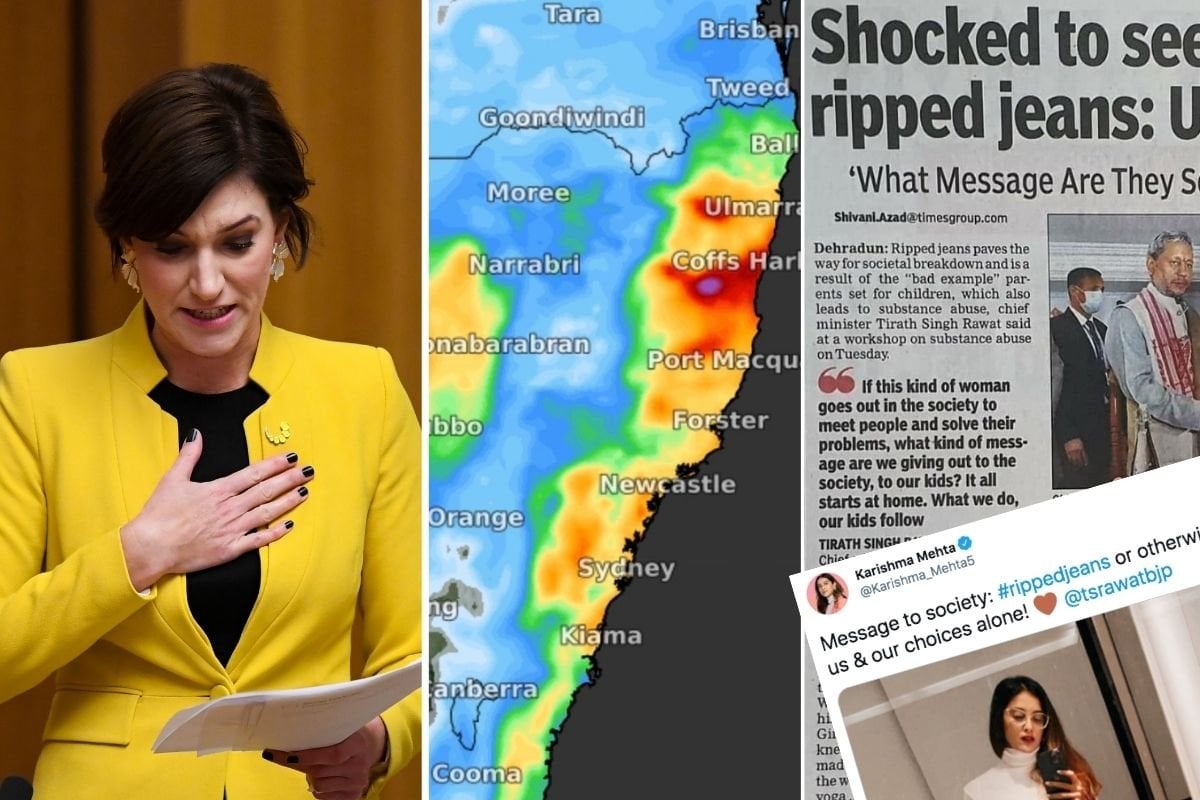 Outgoing Liberal MP Nicolle Flint has read out abusive emails sent to her from the public to demonstrate the ongoing abuse she has received as a woman in parliament, declaring she is tired of the political fight.

Ms Flint is leaving politics at the end of this term and earlier this week gave another speech about the treatment of women in federal politics.

"I have tried not to cry during my speeches and during the TV and radio interviews I've done," she told parliament on Thursday.

Federal Liberal MP @NicolleFlint has made an emotional appeal to trolls who continue to abuse her online. https://t.co/TWh1KQycs4 #auspol #7NEWS pic.twitter.com/KQydT8iR2V

"The online abuse, trolling, victim-shaming and blaming, the complete denial of things I have suffered during my time in parliament that has been aimed at me over the past 48 hours is disgusting. And those involved should be ashamed."

The South Australian broke down in tears before reading out horrific abusive emails sent to her.

One read: "Please do not complain about the treatment you're receiving, as obviously this is your weak characteristic and others will capitalise on this trait."

"This place is not for weaklings and please do not use the female cry-tactic. It will not work and it is not a male's world, it's that you are weak," Ms Flint read.

"No wonder you're being stalked by someone. You deserve it. You're a piece of crap.

"I do not believe one word you said. The filth you're associated with, both in your past with Sky News and the LNP rape club with its continued lies and cover-ups gives me the reason not to believe you.

"Don't insult my intelligence with denials or your false crocodile tears, I'm looking forward to seeing your demise."

The member for Boothby in South Australia again accused Labor, the unions and activist group GetUp of encouraging people to abuse her. Each group has denied having any connection to the harassment and have condemned the way she was treated.

The 36-year jail sentence given to a man who raped and murdered international student Aiia Maasarwe in Melbourne is too lenient, prosecutors say.

Codey Herrmann struck the 21-year-old unconscious with a metal pole, sexually assaulted her, covering her in flammable WD-40 spray and set her on fire at Bundoora in January 2019.

Herrmann pleaded guilty to Ms Maasarwe's rape and murder, and was jailed for a maximum of 36 years.

Then aged 21, he was ordered to serve 30 years before becoming eligible for parole.

Prosecutors are fighting to keep one of Melbourne's most violent killers behind bars for life. Codey Herrmann was jailed for 36 years for the attack on a young international student, but today a court was told that's not long enough. https://t.co/M6PTJ2N36j @JaydeVincent #7NEWS pic.twitter.com/h4pBxG9vaZ

Director of Public Prosecutions Kerri Judd QC is appealing the sentence, arguing Hermann should be given life behind bars, albeit with the possibility of parole.

Among other things, Ms Judd argued the sentence as it stood did not give sufficient weight to the protection of the community. It also placed too much weight on Herrmann's profoundly traumatic and disadvantaged background, the director said.

"This was a vicious, callous and intentional killing of an unsuspecting young woman who was the unfortunate and random victim of 'primitive male rage'," Ms Judd on Thursday submitted to Victoria's Court of Appeal.

The appeal judges will hand down their decision at a later date.

Scott Morrison has defended his handling of rape allegations against Attorney-General Christian Porter, who is now suing the ABC for defamation.

The prime minister is seeking legal advice on what duties Mr Porter may need to relinquish while he pursues the legal action.

But Mr Morrison has refused to seek independent advice on whether the attorney-general is a fit and proper person to remain in the role.

"They are two separate matters," he told parliament on Thursday.

The prime minister has also refused to hold an independent investigation into the sexual assault allegations.

"We have sought advice from the solicitor-general involving these matters," Mr Morrison said.

"I will await the advice from the solicitor-general and that will inform our decision about how we'll be able to address these issues."

She is also concerned the attorney-general will continue to oversee national consent laws and the establishment of a commonwealth integrity commission.

Rainfall lashing NSW and QLD is so heavy it is not just inconvenient but dangerous, with motorists told to take "extreme care" with flash flooding forecast.

A deluge set to last until next week is battering the coast, with more than 200 millimetres already recorded in some regions.

The NSW mid-north coast copped the worst of the conditions on Thursday, with the low pressure system causing the havoc due to spread south to the Hunter, Illawarra and Sydney by the weekend.

#Walgett and #Dubbo in western NSW just had their best rain in 4 to 5 years! ☔️ There’s plenty more wet weather on the way for parts of the state.

Catchments are already soaked, and it won't take much rainfall for flooding to occur, the Bureau of Meteorology's Agata Imielska told reporters on Thursday.

Forecasters say more than 100mm of rain is expected to fall in a short period of time in some regions.

Heavy rainfall will also continue to batter flood-hit Queensland, with parts of the state expecting three months worth of rain by the end of March. The Courier Mail reports the town of Byfield received a record-breaking 550mm in just 24 hours.

Byfield has recorded almost 700 millimetres of rain over the past two days, causing damage to some homes. A campervan at Water Park Creek was stranded overnight, as floodwater blocked the road. https://t.co/PNrJc2LX5T @LizzyAboud #qldweather #7NEWS pic.twitter.com/cDjAcX0eo8

Government guts its own workplace reforms.

The Morrison government has sensationally dumped the vast majority of its own industrial relations reforms including wage theft penalties.

The coalition could only salvage increased rights for casual workers to ask for permanent jobs and a definition of that work type from its original bill.

The Morrison government has sensationally dumped the vast majority of its own industrial relations reforms including wage theft penalties. https://t.co/GC4joNXcBr

The wide-ranging omnibus bill was drafted after months of negotiations between unions, business groups and the government.

Prime Minister Scott Morrison blamed Labor for leading opposition to the bill despite his government failing to win crossbench support for the measures.

"There are many in the Senate and the Labor Party in particular who don't share my passion for creating jobs," he told reporters in Canberra on Thursday.

"I am a practical person, too. That means if this Senate is saying they don't wish to support those measures, then we will have to consider that in terms of how we go forward because I will send them other things to approve."

A teenage girl has been stabbed multiple times in front of horrified commuters at a Sydney train station.

Emergency services were called just after 4pm on Thursday on reports of a stabbing at the Rouse Hill station, where paramedics found the 16-year-old with stab wounds to her chest and arms.

"This was a challenging job, not only because of the patient's injuries, but also because it happened at a train station packed with commuters," NSW Ambulance Inspector Andrew McAlpine said in a statement.

"One of the main concerns paramedics have treating stab wounds is internal injuries, so getting her to hospital as quickly as possible was paramount."

The girl was rushed to Westmead Hospital in a serious condition.

Another girl, aged 15, is assisting police with their inquiries.

New look WA Labor cabinet to be sworn in.

The ministers will officially take their posts on Friday with a ceremony at Government House in Perth.

Mr McGowan has made the surprise decision to appoint himself as treasurer to replace his retired lieutenant Ben Wyatt.

Deputy Premier Roger Cook will remain as health minister and Rita Saffioti will continue in transport and planning.

WHO to issue 280 page report on the origins of the coronavirus.

The head of a World Health Organisation team working with Chinese colleagues to finish a long-awaited report into the origins of the coronavirus acknowledge its authors could face "pressures" but insist the final product will have a unanimous green light from all of the team's science-minded members.

Peter Ben Embarek, an expert on food safety and diseases that jump from animals to humans, said in interviews on Wednesday and Thursday that the team hopes the report - now totalling 280 pages and complete with graphs, dates and annexes - will be ready for release next week.

The report is a first-phase study that is expected to be followed by a more in-depth look as part of guidelines set by Chinese officials and the WHO team.

Ben Embarek, who led a 10-person international team of experts that visited China in January and February, acknowledged that political pressures have loomed large over the virus pandemic.

"We are in the world that we live in," he said. "It's possible that there will be pressures from right to left."

"What we can guarantee is that everyone will be on board" and "unanimous" in their backing of the report once that the text is completed, Ben Embarek said.

Tirath Singh described in detail the attire of a woman who sat next to him in a flight. The woman, he said, identified herself as a NGO worker and was travelling with her kids. He said: "You run an NGO, wear jeans ripped at the knees, move about in society, children are with you, what values you will teach?"

The video has since gone viral, prompting hundreds of women to post photos online of them wearing ripped jeans alongside commentary that "clothes don't define character" and "no one should be judged on their attires."

- The European Union's drug regulatory agency says the AstraZeneca vaccine is NOT linked to an overall increase in the risk of blood clots, labelling it "safe and effective".

- The coronavirus state of emergency for Tokyo is to be lifted on Sunday ahead of the Summer Olympics despite concerns about a recent rise in infections.

- The UK will have to slow its COVID-19 vaccine roll-out next month due to a supply crunch caused by a delay in a shipment of millions of AstraZeneca shots from India.

S
suz a year ago

Reply
Upvote
To the pollie. When my daughter started high school teaching I gave her one piece of advice. Do not let some obnoxious 16 yr old boy reduce you to tears, you only cry when the dog dies. Well the day came when this smart ar.. boy was at her and said I won’t let up Miss  till you cry. She looked at him half smiled and said, what her mother had told her, I only cry when the dog dies.  He was so taken aback he sat down and she didn’t hear another peep out of him.
G
gypsy a year ago

Reply
Upvote
@suz Exactly,  you cannot take rubbish from people in the workplace. Women have to learn to give as good as they get.
R
rodina a year ago

Reply
Upvote
@suz You are quite right women need to turn off waterworks in the work place.
G
gypsy a year ago