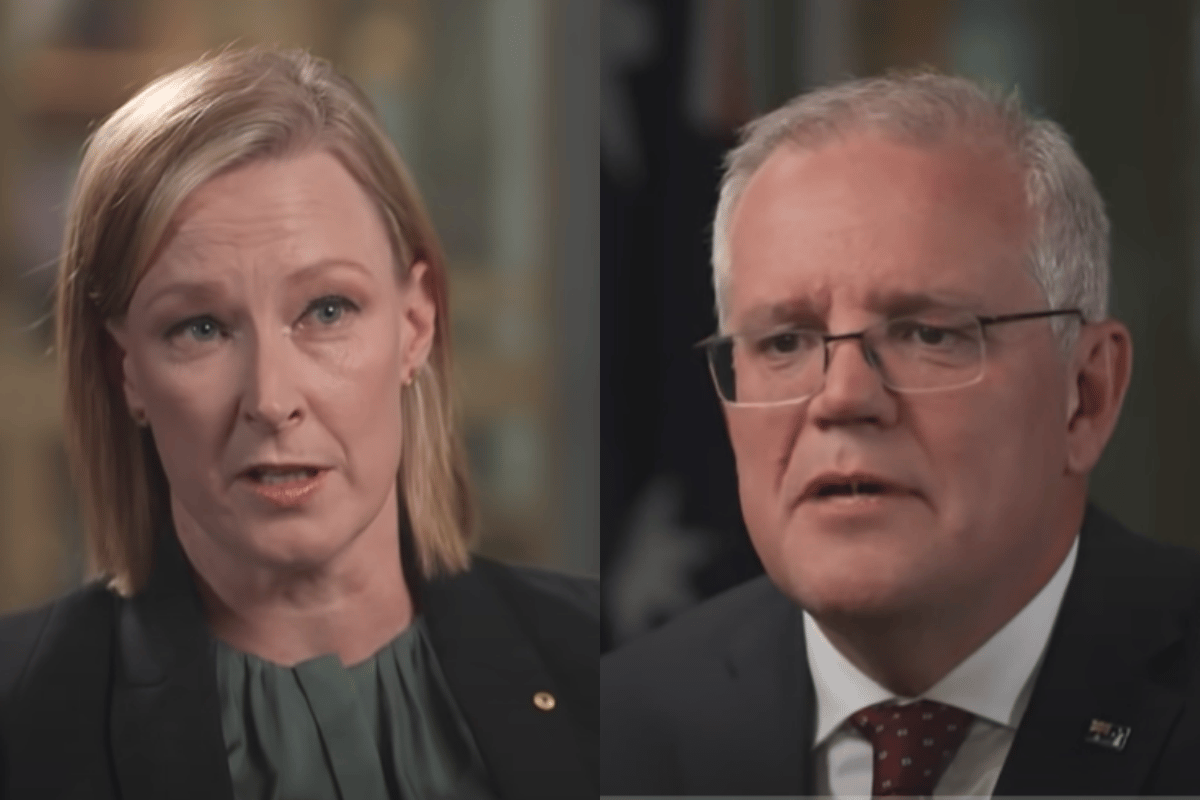 Last night, we watched as Prime Minister Scott Morrison sat down with journalist Leigh Sales on ABC's 7.30 Report, ahead of the next federal election.

During the interview, Morrison was asked about recent controversies that have been making headlines in the past few weeks, including his intervention in the NSW pre-selection and the criticism he's received from two female Liberal MPs.

Of course, there was also talk about the recently handed down federal budget and the government's plan for spending if they take win the election.

Watch: A snippet of Prime Minister Scott Morrison speaking to Leigh Sales on 7.30. Post continues below.

Here are four of the biggest moments you may have missed from last night's 7.30 interview.

1. Scott Morrison said he intervened in the NSW pre-selection to protect women in parliament.

During the interview, Morrison defended his decision to intervene in the NSW pre-selections, saying he wanted to protect female candidates in parliament whose positions were being threatened by faction groups.

The intervention in the pre-selections, carried out by the prime minister, NSW Premier Dominic Perrottet and former president of the federal Liberal Party Christine McDiven, enabled the re-endorsement of ministers Alex Hawke and Sussan Ley, along with backbencher Trent Zimmerman.

"I'm very serious about having great women in my ranks," he told Sales when asked about his decision to intervene.

Sales then pointed out "it wasn't just women", he was helping.

"That was what the principal reason was and people know that. There were other members who were able to be endorsed by that process," he replied, adding he will always stand up for people in his party and particularly people in his government when factions try to "take them out".

PM @ScottMorrisonMP claims he made the decision to intervene in some pre-selections in New South Wales because he is "very serious about having great women" in his ranks. #abc730 pic.twitter.com/aKxA8VOGGS

On Tuesday, the NSW Court of Appeal ruled the move was valid, clearing one of the final hurdles for the prime minister, who is set to call the federal election in a matter of days.

But an application for the High Court to hear an appeal on the decision could throw a spanner in the works.

The Sydney Morning Herald has reported an application for special leave to appeal the decision was being prepared and would be lodged on Wednesday.

2. Scott Morrison responded to recent criticisms of his character.

Sales didn't hesitate to ask Morrison about the damning character assessments he's received from two female MPs from his own party in recent weeks.

On Monday, NSW Liberal MP Catherine Cusack called out Morrison for his "self-serving ruthless bullying" and said she will not vote for his government in the upcoming federal election.

The week earlier, outgoing Liberal senator Concetta Fierravanti-Wells called Morrison "ruthless" and "a bully" who is "not fit to be prime minister" during a parliamentary speech on budget night.

When asked why Cusack - a lifelong member of the party - would turn on Morrison "if there was no basis", the prime minster responded saying people 'lash out' when they're frustrated or don't get what they want.

"When people have become frustrated in the political process, they have lashed out. People have [an] axe to grind in political parties. Connie the same," he said.

"When people have an axe to grind, particularly on the eve of election ... that is what happens in politics. But the facts tell a different story about what we've done." – @ScottMorrisonMP responds to criticism of his character #abc730 pic.twitter.com/145Qp1tpmg

"As Prime Minister, you've got to take all the slings and arrows and I do. I never lose my focus on the job."

"You can't just say yes to everybody and give everybody what they want and when they don't get what they want, like a $90 billion submarine contract, then, of course, they're going to lash out."

"Scott Morrison’s brazen attempt to fund flood victims in a National party seat and exclude flood victims in a Labor seat that I happen to live in was just too much," Cusack wrote in an opinion piece for The Guardian this week, after announcing she would quit Parliament over the handling of the funding.

Addressing the issue, Sales said the funding was later extended to Labor areas "after a huge outcry".

"You said today that was because more assessment was required. But come on, it was immediately obvious that all of those areas needed help?" she asked the prime minister.

"What I said when I went to Lismore is that we had immediately identified three local government areas on the basis of the advice we had from the National Recovery and Resilience Agency, that should qualify for those three payments.

"The truth of the matter was that we had always intended to make further assessments, and if those assessments supported those payments, then we would, and we did." – @ScottMorrisonMP on the flood recovery payments #abc730 pic.twitter.com/Fahadqcfmc

"I said to the Labor member up there in Richmond, I said that we would be doing further analysis in the coming days, and we would make further announcements and that's exactly what we did," he continued.

"I can understand why [Catherine Cusack] was upset but the truth of the matter was that we had always intended to make further assessments and if those assessments supported those payments then we would and we did."

4. Scott Morrison couldn't commit to interviews other leaders have done for 27 years.

In a rather awkward end to the interview, Sales asked if Morrison would be happy to give two interviews on air during the election campaign, as she says leaders have done for the past 27 years.

"I've already invited Mr Albanese and he agreed. So I wanted to invite you while I'm here. Would you be happy to do a couple of interviews on air?" asked Sales.

"Well, we'll be appearing on the ABC and everybody's programs over the course of the campaign, Leigh, and we've always made ourselves pretty available," Morrison responded.

When Sales pointed out "that's not a direct answer", Morrison said, "the election isn't about the 7.30 Report".

"It's about the Australian people and we'll make ourselves available to the ABC and all the networks and I'll be standing up every day," he continued.

"You will be the first Prime Minister in 27 years to not do two interviews on the main prime-time current affairs program in country," Sales responded.

"Surprisingly, I don't think the major issue that people are thinking about at the next election is the 7.30 Report," quipped Morrisson.

Sales agreed but pointed out that the public want to hear from him and "that's a million people that you're turning your back on if you don't do it."

"They will get that opportunity, Leigh," Morrison said as he ended the conversation.

.@leighsales asks @ScottMorrisonMP whether he will commit to further interviews on #abc730 during the election campaign. pic.twitter.com/NmqlCRKtl5