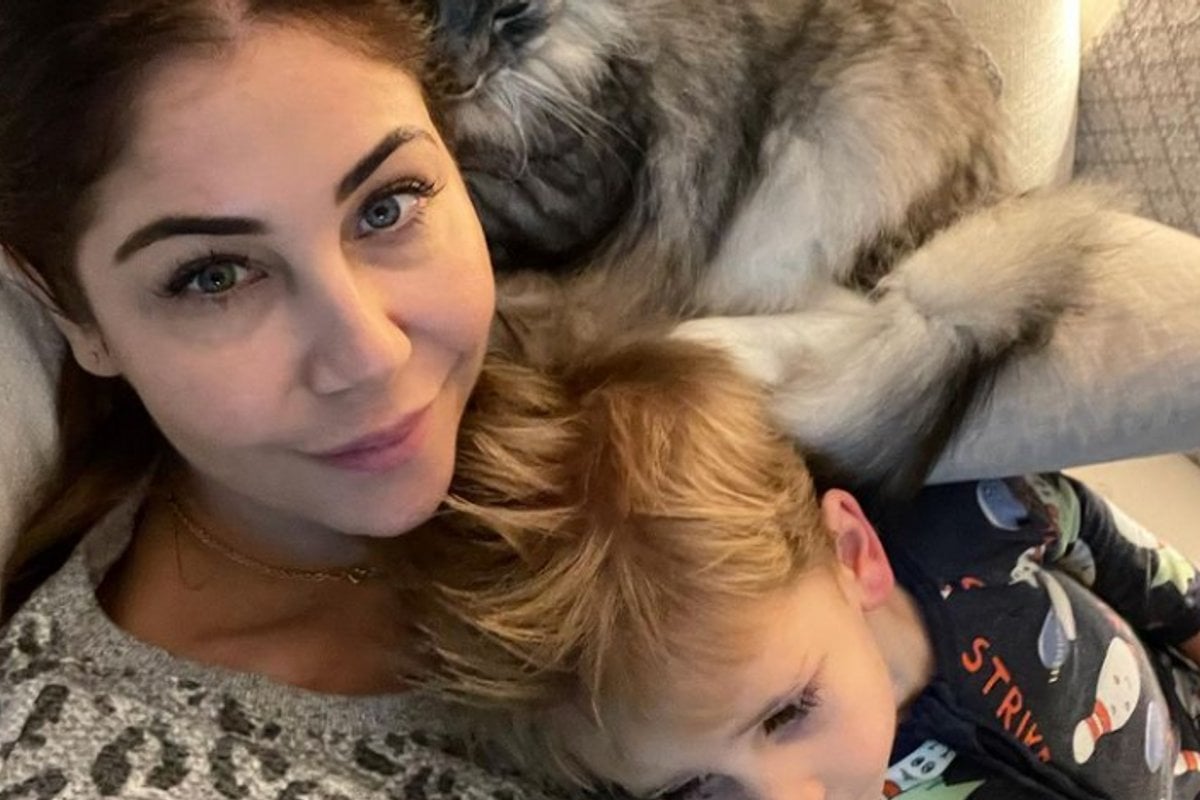 I knew as soon as I saw the flicker on the screen.

“That’s too slow,” I said to the sonographer.

“Hang on,” she said. “I can't see properly because your bladder is too full. Go and empty it and we’ll do an internal ultrasound.”

And so I was sent away for a week - the only thing that can be done - to essentially wait for my baby’s heart to stop.

A scan eight days later showed no flicker on the screen.

It wasn't my first time on the ultrasound table with my heart in my throat, each second feeling like a minute.

On the road to having our son, my husband and I faced a fair few setbacks, including a missed miscarriage (which is when you don’t bleed but it is discovered that the baby has passed during a scan) and three full rounds of IVF, each of which was fruitless.

I documented our years of trying, and just when we had pretty much given up, I fell pregnant during a last-ditch effort on prescription fertility medication.

Regular listeners of our parenting podcast, This Glorious Mess Little Kids, have been following along as I share our journey to our maybe-baby number two and whether or not I’m tempting fate.

Is it fair to want another child when a few years ago I swore to the universe I’d be happy with one if I could please, please just have one healthy baby in my arms?

And I got him.

But evolution is a tide stronger than logic, so here we are.

Listen to Leigh's fertility update as she tries for baby number two in the latest episode of This Glorious Mess Little Kids. Post continues below.

And in the time since losing the baby, having surgery (a dilation and curettage is a small operation to remove the tissue and in my case, send it away for diagnostic testing) and recovering, I’ve been somewhat philosophical about the journey. In case it helps any other women or couples, here’s what I’ve learned.

The mind/body connection is easily lost.

In the few months I was pregnant I welcomed by breasts getting fuller, my hips getting rounder and my belly getting softer. It was ‘for’ something. But as soon as I knew the fate of that pregnancy, I immediately disliked the very parts of my body I was fond of that morning.

I’ve never really had body hang-ups. Sure, I whinge about parts to my girlfriends and I certainly have bits I would improve if I had a magic wand, but for the most part I like my body.

Until it had failed me. As if my mind was separate to my torso and limbs, now my mind thought my body was ugly and useless and needed to be punished to get back to how it was ‘before’.

It took some deep self-reflection to be nice to myself through the process. Kind to ALL of myself, and let my body grieve and heal the way my mind was.

It’s easier when you already have a child

This is deeply personal and I can only speak for myself in saying this, but I feel that fertility struggles are easier when you already have one child.

Because in the few years we were trying to fall pregnant before I had my son, carrying to term and being a mother was a huge black hole in front of me. I had no idea if my body was capable of making me a mother.

Parenthood was an entire universe behind a closed door I’d been knocking at, increasingly more desperately, for years.

Behind that door I could hear whispers and hushed voices of mothers and fathers not wanting me to feel left out. I felt so isolated and alone - not only from infertility itself, but also from friends trying to protect me - that becoming a mother felt like the most elite club there was.

Now I’m in that club. The door opened to that universe and now I’m in it and so grateful I get to experience what so many women still on the other side of the door are desperate for. Because of that, I don't think I’ll ever feel the same frantic longing I felt back when I was trying to conceive my son.

It’s okay to still care about other things.

Because Murphy and his Law totally sucks, this all happened right in the middle of some really important work stuff. I mean, when does pregnancy loss ever happen at a good time, right? But this was really bad timing.

Knowing we were waiting for the heartbeat to stop and that I’d need to go in for surgery fairly soon thereafter, I gave my bosses at work the heads up. They were fantastic about it and responded in the most caring and understanding way possible.

“Do not worry about a thing there. We’ve got it all covered. Take as much time as you need and don’t give work another thought.”

I’m very grateful for their support. But I was frustrated at the timing of my life because I’m not just a mum trying to have another baby, I’m also a career woman who works really hard and gets a great deal of accomplishment and satisfaction from her work.

For months I had been prepping and planning for a big presentation, my ‘work baby’, if you will, and it looked like I might have to miss it, meaning both big, exciting things in my life were suddenly over.

I felt ripped off.

Then, on top of that, I felt so guilty for caring about work when all I should care about is my baby. Maybe I didn't deserve the baby if I didn't want it enough to be so totally devastated that I couldn't go on with normal life? Maybe it’s my karma for wanting it all?

Thankfully, I was able to make the presentation and reclaim a bit of myself.

It was the reminder I needed - that trying for a baby can be all-consuming, and for that very reason it’s important to have other outlets and passions in your life to keep you going.

In the time I waited for the heartbeat to stop and the week following, when I was dealing with the physical aftermath, I found myself watching other women and wondering about their stories.

Just like me, there are women bleeding in boardrooms right now, their colleagues none the wiser. Mothers cramping at daycare pickup and soldiering on, hoping one day they can give their child a sibling. Women clutching their phones waiting for the IVF clinic to call.

There are stories just like mine sitting next to you on the bus. At Woolies. In the coffee line.

And from one mother-in-waiting (again), to another, I hope these women and their stories end with the happy announcement they’ve long dreamt of making.

Baby dust to all of us.

psc22 a month ago

Reply
Upvote
I'm so sorry for your loss Leigh, but thank you so much for sharing your story.
I am currently going through a very similar experience - having a miscarriage right when I'm due to deliver a major project at work! This is my second miscarriage in 7 months, my first one being a similar situation to yours with a low heart rate at the first scan and none at the second. This one was just a whole lot of bleeding and suspected ectopic.
I'm incredibly fortunate to have an amazing 5yo daughter (light of my life doesn't even begin to describe her!), but also lost our second daughter in late 2019 through TFMR due severe congenital abnormalities. All but my first were IVF babies.
I have been struggling so much more with this miscarriage compared to the last - it's like all three of my losses are hitting me hard all at once, and I'm overwhelmed by a sense of having no control over my life and the fate of my family.
Your story however has helped - I might be by myself in my grief, but I'm not alone, and my struggles are real and valid and shared. My fertility journey has been a long hard road and I’ve felt misunderstood and isolated throughout most of it. I'm not yet at the end of it either, holding out hope for the miracle of another healthy babe in arms.
But talking more about the struggles of infertility and the losses so many of us experience, is so important for bringing it all into the light, and in the process helping those around us to better understand and support us. So thank you again for sharing your very personal experience and contributing to that effort. Xx