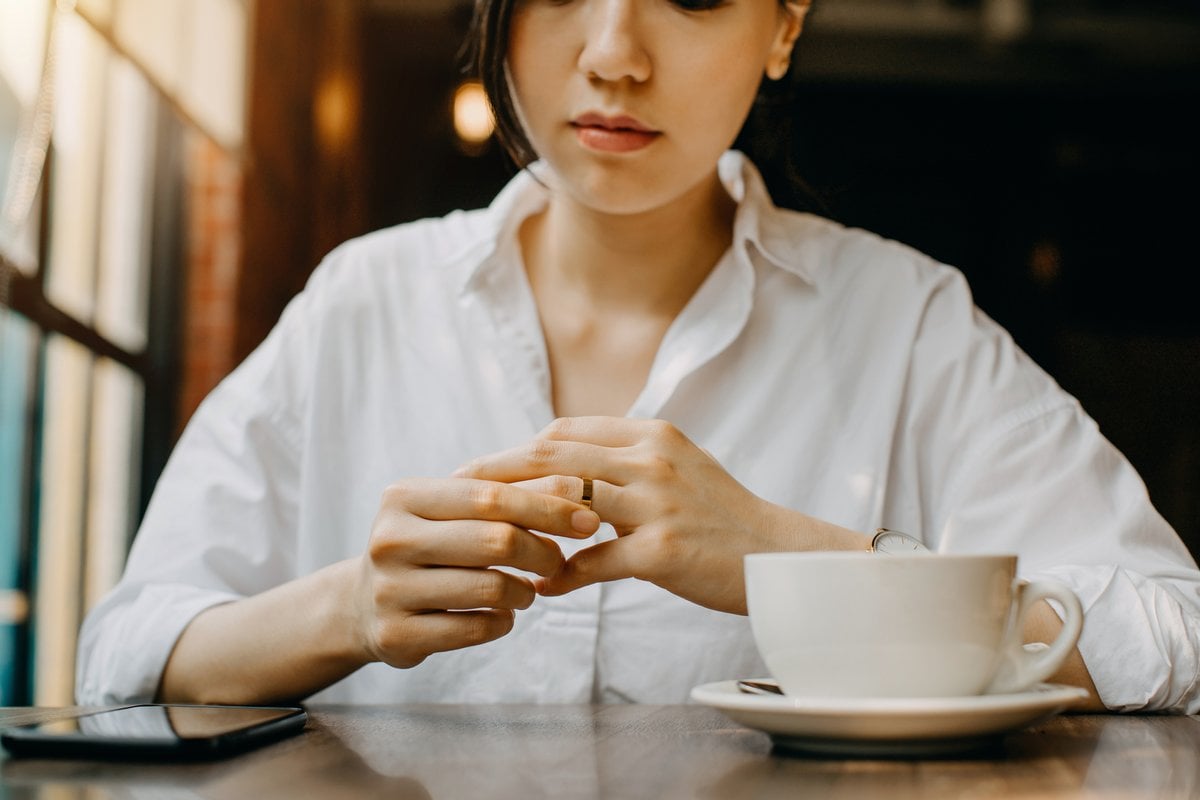 I suspect a fair number of readers saw the subject and thought, "B*tch, serve him papers and leave!"

I don’t hate my husband. I love him. Just not in a romantic way. Not in a sexual way.

I planned on telling Joseph at the end of the year that I’m done. My rationale was that we’re not leaving the house anyway with coronavirus lockdown and our kids would need both parents at home for virtual school. Why make it more complicated?

Well... I made it more complicated.

Joseph walks in as I’m having an emotional moment over this decision. It’s not the kind of choice you can be confident about until it’s announced out loud. I tell him that I don’t think I can go back to feeling anything more than friends.

He’s fine with that. My husband could go for the rest of our lives without having sex. I tell him I want us to focus on the kids and stop working on us. Joseph is fine with that too.

Delicately (very delicately) I explain that I want the option to find someone and have that feeling of love again. That I want a full relationship with someone. However, I’m torn because I want the kids to have full access to both parents while they’re still young.

I want a "Parenting Marriage". We would be like coworkers raising the children in a home with two parents who love and adore them. The focus would be on the kids and not each other. As in, pretty much what we already have.

My husband points out that finding someone new means I wouldn’t focus on the kids. It didn’t matter if I only went on dates when the kids were asleep. It didn’t matter that any rare time I used to see my friends on weekends would be no different from the time I would then allocate to dating.

"Yeah, I don’t want some random guy around the kids," Joseph says. "Why would anyone need to meet the kids? I’m pretty sure the average guy would be more than happy to not meet kids and just focus on the dating part," I answer and make it clear that I will never, ever live with a guy ever again.

Joseph then says he wants that in writing and that we would have to have a post-nuptial agreement. That didn’t deter me like he thought it would.

"You think some guy will be okay with dating you if you’re still under the same roof as your ex?" he asks.

"No, that guy would try to edge his way into the kids’ lives and get rid of me," he replies, in some spiel about Alpha-male behavior.

"Then let’s get a studio apartment nearby. The kids don’t have to move out. We would. We could alternate every week who lives there."

"I don’t think that would go over well if I brought a woman back to that place and she saw all your beauty products in the bathroom." I don’t bother pointing out that I wouldn’t leave those kinds of things there (and if I did, they would be in a box).

I can’t think of a solution. I don’t want our kids to move out of this house. A promise was made to them when we moved in that we would be done moving for at least 10 years.

This would be their house while they go through childhood and their teen years. Everything, right down to renovations, was made to support them and their needs. There’s no way we could split our assets in a way that one person could move out and get a decent-sized place while the other one keeps the house.

What else can I do? Cry. Lots of crying.

I sob, "I don’t want to end up like my mum. She was miserable with my dad, they had no affection, and now she’s just in a state of existing instead of living now that she has no kids to raise."

Joseph cries, "But what if you make this choice when it could have gotten better, eventually?"

"It took us almost 20 years to get to this point. You think we should stick it out until we’re 60 to finally be happy?"

Without skipping a beat, he replies, "Yes. Hopefully, it won’t take that long, but yes. I think we need to make small goals and work towards them."

Each time we have this discussion, he completely melts down and starts bawling. Curled-up-on-the-floor-hysterical crying. My heart breaks and my maternal brain only wants to stop the sound of someone crying in extreme pain. So I soothe him with hugs and we end the discussion for the day.

Joseph has come a long way and stepped it up the past year in comparison to the prior two decades.

While I’m grateful for his efforts, I’m too skeptical and burned from our history. My rationale is that despite hitting rock bottom last year when his massage parlour trips came to light, being stuck at home for a pandemic isn’t standard so it’s easy to make changes.

I don’t trust him. I don’t trust me. I explained it wasn’t for this pandemic, I would have cheated on him this year (despite that I already did but I don’t want to crush his soul when it wouldn’t help the cause). I told him he shouldn’t trust me and that I don’t care if he makes his phone open to me any time; I hate the knot I get wondering what’s going on behind my back.

One should feel grateful when they have a spouse who wants to fight for their marriage, right? Who is stepping it up helping out and offering extra affection? Who is willing to forgive past behaviours and create transparency?

On my end, I cringe when Joseph comes in for a hug or a kiss.

I close the door now when I’m changing or showering. It’s an awful feeling; being a jerk who doesn’t feel the same love as the person on their knees begging for me to stay in the fight. But the thought of having sex with him makes my skin crawl and my body sweat with dread.

I have thought daily about divorce since February 2018.

Joseph was in a foul mood and said some horrible, awful things to me in front of my daughter (thankfully she was so young, she didn’t understand what he said). I worked with an online therapist who told me that was verbal abuse; she instructed me to tell him I would never tolerate that kind of talk ever again.

Since then, he hasn’t ever spoken that horribly to me but I think that was the nail in the coffin. Maybe it wasn’t fully nailed shut, but the nail was in place.

This isn’t a secret. I told him last week that I’ve been mulling over divorce for more than two years. It didn’t phase him. Nothing will phase him. He is laser-focused on not divorcing.

That’s a huge burden, to know you are the only reason your kids’ world will rip apart. Joseph won’t make it amicable. We won’t have the type of divorce relationship where we can still have birthday parties or trips together with the kids.

Is it worth it? All so that I can maybe... hopefully... find sex and love again? Or if I stay single, to enjoy a life of truth instead of faking the role of a happy wife?

So here I am, crying, wanting the divorce my husband won’t willingly give me. I’m just a girl, standing in front of a boy, asking him to divorce her.

This story originally appeared on Medium  and has been republished with full permission.

Reply
Upvote
The worst thing you can do for your kids is model a life you wouldn’t want them to emulate. Sounds like your husband ended this marriage a while ago, but he wants to have his cake and eat it too.
M
mamamia-user-327613665 2 years ago

Reply
Upvote
Thankyou for sharing your story, this sounds so awful and trapping. From an outsider's perspective who has been in a similar situation, mustered the courage after 2 years of trying to leave, and then met the love of their life within a month, I can hear how much misplaced guilt you're carrying about making the decision to leave when you know it's not healthy or meeting anyones needs.
It sounds as if as much as your physical boundaries may be respected by your husband, your emotional boundaries and emotional needs are not being respected, and you are being emotionally manipulated into staying when you have made it clear it is not ok for you, there is no trust in response to your husband's actions breaking your trust and not meeting your emotional needs over years, and you are clear that separation is what you need to be ok emotionally.
It sounds like you're doing your absolute best to put your children first in the situation, but its so easy to buy into the fallacy that parental separation will harm our kids and we as women have to sacrifice our own needs in order to do the best for our
M
mamamia-user-327613665 2 years ago

Reply
Upvote
@mamamia-user-327613665
children and give them a happy home.
Kids most need us to be there to support them through adversity, be consistently present for them, be attuned to their needs and love them unconditionally even when it's hard.
They also need us to role model what healthy boundaries look like in relationships, and how important it is that they communicate their needs respectfully to others, but also take action to keep themselves physically and emotionally safe if someone is doing something that is hurting them or making them feel unsafe in any way.
It sounds like you have a lot of misplaced guilt and expectations on yourself for giving your kids the childhood you wished you had, but also taking on 100% of the blame and responsibility when it hasn't gone to plan, rather than your co-parent also being accountable for this and for finding a solution that meets your children's needs while respecting yours too.
As you said, you know what it was like to grow up seeing your parents trapped in a loveless marriage, and how much that undermined all of the other good things they worked to provide, like a stable home. I hope you can trust your instincts about the situation and set yourself free from the blame, guilt and overresponsibility that are holding you ransom ❤
News
General
Opinion
True Crime
Politics
Sport
Explainer
Entertainment
Celebrity
Reality TV
Movies
TV
Books
Rogue
Royal
Lifestyle
Beauty
Fashion
Weddings
Home
Wellness
Health
Fitness
Travel
Food
Family
Before The Bump
Pregnancy
Baby
Kids
Teens
School
Parent Opinion
Work & Money
Money
Finance
Career
Lady Startup
Relationships
Sex
Dating
Separation
Friendship
Family
Real Life
Couples