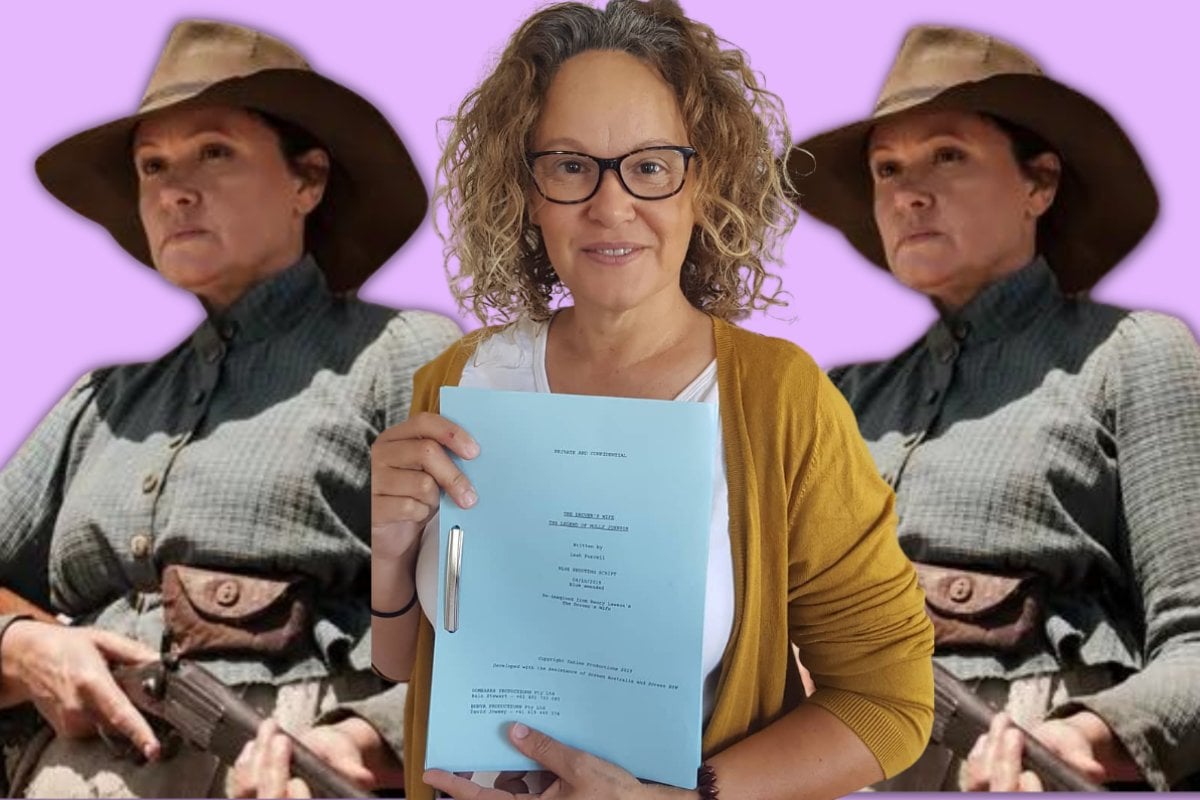 The following contains spoilers for The Drover's Wife: The Legend of Molly Johnson.

When Leah Purcell was five years old, her mother read her a story she would never forget. The story was called The Drover's Wife.

Written in 1892 by Australian author Henry Lawson, the tale was about a woman living in the Outback with her four children while her husband was away droving.

Years later, Purcell would adapt Lawson's short story into an award-winning, critically acclaimed play. She would then write a bestselling book based on her play.

Now there's a feature film: The Drover's Wife: The Legend of Molly Johnson.

Watch the trailer for The Drover's Wife: The Legend of Molly Johnson. Post continues below.

Just what is it about this particular story that has moved and enraptured Purcell so much for her to adapt it into three different mediums?

"I think it was the first story where I could use my imagination," the 51-year-old tells Mamamia. "I saw myself as that little boy [in the book] and I saw my mother as the drover's wife. Because it was only us at home. Even though I'm the youngest of seven, they'd all moved out and got on with their lives.

"We had a wood heap and so my mother taught me to split logs. She taught me how to stack a wood heap but she would say 'don't stack it hollow'. Otherwise the snakes will get under.

In Purcell's expanded vision of Lawson's work, the drover's wife - Molly Johnson (played by Purcell) - is a much more complex character in an infinitely more complex world.

Set in 1893 in Australian Alpine Country of the Snowy Mountains, a heavily pregnant Johnson struggles to take care of her children. When a fugitive Aboriginal man, Yadaka (played by Rob Collins), happens upon her property, her whole world changes.

The themes in the film are plentiful: domestic violence, racism, misogyny, women's rights, and Indigenous rights. But Purcell says that first and foremost, it's a good story.

"If someone said to me, 'Leah, we want you to write a film about domestic violence, Black Lives Matter, racism, misogyny', I would run a mile. If they said, 'Tell me a story about your grandmother'... My grandmother is part of the Stolen Generation," Purcell says.

"Yadaka was loosely based on my great grandfather and the hardships that he went through. I didn't meet him - he died just before I was born - but everyone that spoke about him spoke so highly of the gentle man that he was and what he did. About his love for his family.

"When I first sat down to write this story, it was 2014, and there was the intervention in the Northern Territory, and every black male in Australia was being hammered on social media as useless fathers, no good men. That is so wrong because I only grew up with black men in my life; my uncles, nephews... they're great fathers and grandfathers. My father, my white father, wasn't there."

Purcell tried to steer away from domestic violence in the film "because I do touch on it in a lot of my work". But she found she couldn't.

"I come back to [domestic violence] because I have experienced that. That's my truth. And the more I pulled away from it, the more it would present itself, just organically through the piece. And I said, I can't fight this, because I'm fighting myself," she says.

"The media is picking up on what's been happening in this country for far too long. A lot more women are speaking out. I said, 'Well, if I can put this to the forefront again and allow women to find strength in the Molly Johnson character to speak up or to make a change in their life, then as an artist I've done my job through this film.

"I call these issues the undercurrent; they’re my foundation. They’re bubbling underneath and bubbling through what we consider a great yarn... it's a good film. But underneath, there's all this other stuff to be spoken about, to be talked about. And that's what I want my audience to walk away with, being emotionally and intellectually stimulated, and to start a conversation."

Not only is Purcell the star of the movie, she is also the writer, director and co-producer. While many would baulk at the challenge of wearing so many hats, the Wentworth actor embraced it.

"I think waking up in the morning and getting out of bed is a challenge! But when it comes to my work, I love the challenges. And I fear them. And then I fear nothing. And I just dive straight in," Purcell says.

"I was stimulated at the thought of wearing all those hats. I love directing. I love acting, I love writing. I can't help but produce in the sense that if you gotta get something done, you do it. Where I'm at in my life - 30 years in the industry now - I wanted to be challenged."

The biggest challenge was getting financial backing for the film. Together with her life partner and lead producer Bain Stewart, they raised the funds to ensure The Drover's Wife could be told the way Purcell envisioned it.

"If we didn't raise the money, then we would have had to sacrifice some of the scenes in the film," she says. "Then you start chipping away at the heart and soul of the film and things change. That would have been the biggest challenge in the true sense of the word. But as I said, I feared everything, feared nothing, put on all those hats, and I went to work."

Part of that work included doing her own stunts, something she relished.

"I’m a very physical actor," Purcell says. "I used to ride horses when I was a kid, but I hadn't sat on a horse in bloomin’ nearly 30 years. And I wanted to ride the horses. But there was a month of rain and my lessons got cancelled. So the producers pulled rank and said, 'You can't ride your horse.' And I said, 'Well, I've got to give the stunt double something to do so he can do that!'

"I love getting down and getting dirty. Our distributors, Roadshow, were on set when I was doing that scene when I fall over with the baby. I did 12 takes and they're standing in the corner going, 'What is that woman doing?!' Wrap her in cotton wool, she’s mad! That was fun for me."

Due to the time period and the nature of the story, the setting of the film had to be special. And as an Indigenous woman, it was of even more importance.

"The land had to speak to me," Purcell says. "I had to feel safe and comfortable being in someone else's country as an indigenous First Nations person's perspective."

She found the location when starring in another film - 2006's Jindabyne - and fell in love with the snowy mountains of the region. "Whilst we were out there, on my days off, I would go for a walk around the parks as you do. And myself and Bain went up to Mount Kosciuszko.

"And this is true, I yelled out on the top, 'I love this country, I love this land, I think I'm gonna do something here. I think it's gonna be The Drover's Wife and I think I’m gonna be in it, in it, in it!' And it reverberated all around the mountains."

Years later, in 2019, she would make good on that promise, filming on the opposite mountain range. "So as they say: be careful what you put out there," Purcell says with a laugh.

Purcell did six years of recce (where a production visits the location prior to shooting to check its suitability). She and her team worked with the landowners and community, including the Indigenous community.

She credits her connection with the land for revealing certain locations to her. "I dreamt the tree at the very end [of the movie]," Purcell tells Mamamia.

"And then it was a mistake that we found it, that we found Molly's plateau, as I call it, because we were there to see the waterway down the bottom... We took a shortcut. We just walked up this steep little hill and we get up there and there's this plateau. I went, this is it.

"A lot of people have said that they felt that the landscape is a character in itself. That's a beautiful, added level if your landscape or the composition of your shots are speaking to the people."

The little girl listening to her mother tell her the story of the drover's wife could never imagine that one day she would write a play, a book and a film about it. But perhaps, it was all destiny.

"If we were back in [olden days], I think my clan, my family, would be the storykeepers and the storytellers," Purcell says reflectively.

"I grew up with uncles and aunts and they were phenomenal storytellers. That's how I learned to tell a story. They were great comedians; their timing would put Whoopi Goldberg and Robin Williams to shame. They could deliver a punchline.

"I feel so privileged and lucky that I did have that upbringing, where I saw storytelling at its most raw and most truthful. In those storytelling times, there was pain, there was sorrow, but there was plenty of laughter and reassurance of seeing hope for the future.

"I’m a storyteller. It's been in my DNA since time began. It's been waiting for me."

The Drover's Wife: The Legend of Molly Johnson is in cinemas from May 5.