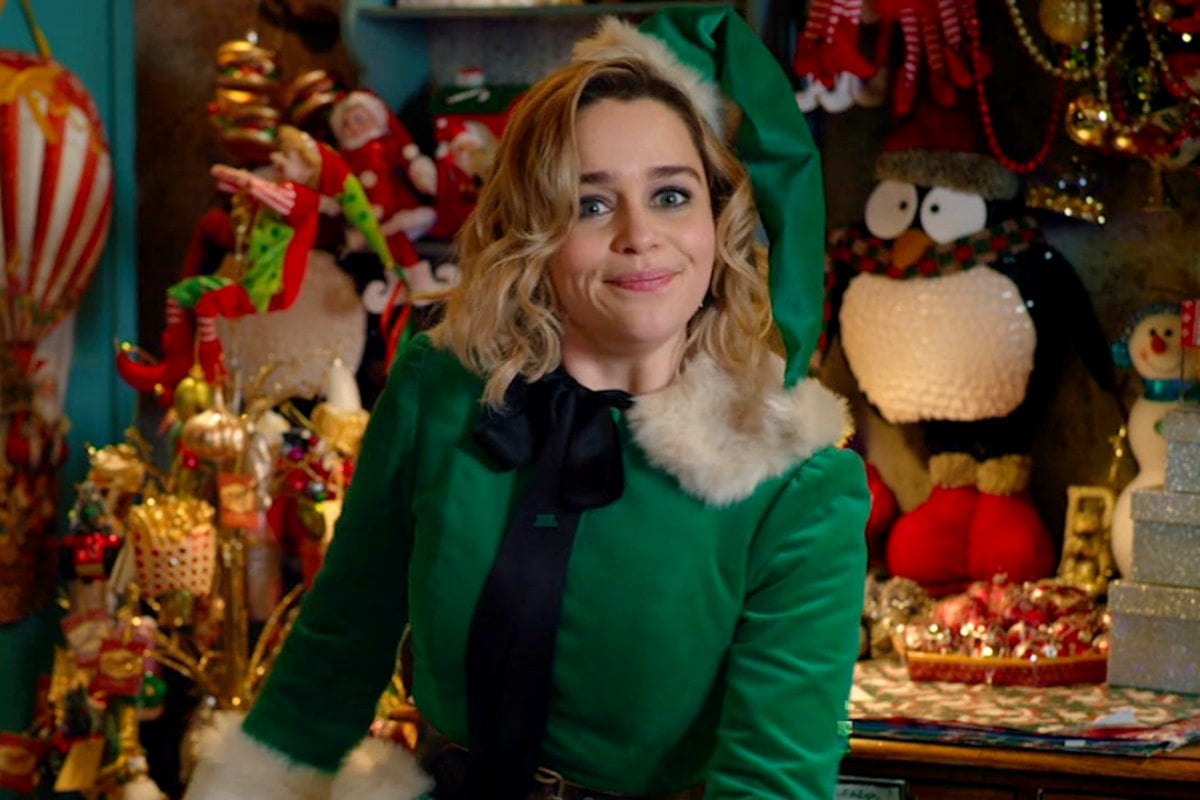 This post contains MAJOR SPOILERS for Last Christmas. Continue reading at your own risk.

Ever since the words Emma Thompson, Henry Golding, Emilia Clarke and George Michael were mentioned in the same sentence, the anticipation for festive film Last Christmas has been sky high.

It’s directed by Paul Feig (the same man who gave us Bridesmaids, the Ghostbusters reboot, and A Simple Favour), and from the trailer, it seemed like the famed director was going to give us the next Love Actually.

But here’s the thing. It’s definitely not the next Love Actually – an iconic British film synonymous with Christmas cheer and romance. And that’s also the reason why you need to watch it.

Last Christmas is grittier. It’ll draw you in with its shiny outward appearance, and then stab you in the heart with a mistletoe-wrapped dagger.

Watch the trailer for Last Christmas here. Post continues below.

It stars Emilia Clarke, the Game of Thrones actress who here plays 20-something Kate. She’s irresponsible, reckless, and begrudgingly works full-time in a year-round Christmas shop. Her boss, the hilarious Santa (Michelle Yeoh), is a fan of a tender, tough-love approach, and while there’s a lot of affection between the two, their relationship is… tense.

While working in the store in the lead-up to Christmas, Kate meets Tom (Henry Golding). He’s an annoyingly chipper do-gooder, and the pair begin a flirtatious friendship. He’s impossibly nice, volunteers at a homeless shelter, and comes and goes from her life with no rhyme or reason. Tom’s kind-hearted nature gradually rubs off on Kate, and she begins to volunteer and rekindle her relationship with her friends and family.

As the film progresses, we also learn that Kate’s bad behaviour can be explained by the fact that she once suffered from heart failure, which resulted in a heart transplant and a lengthy stay in hospital. And this is where the film diverges from the normal Christmas rom-com path.

Feig pulled the oldest trick in the book, and yanked the rug of reality right from underneath my cinema seat.

Tom, as it turns out was Kate's organ donor, and a figment of her imagination.

Was the twist a little predictable? Maybe. Did I audibly gasp, and shed genuine tears sadness, right on cue? You betcha.

The things is, when it came to the plot twist, there were (many) clues which hinted at the big reveal:

In fact, some people had already guessed the plot prior to the film's release.

me getting mad about the last christmas obvious plot twist but then remembering the lyrics pic.twitter.com/22PkiyNyew

me when i figured out the twist in last christmas just now pic.twitter.com/T28aspOUiE

i swear if n the Last Christmas movie, if henry holding doesn’t say the exact line of dialogue, “last christmas I GAVE YOU my HEART” (emphasis on the capitalization as he’s sobbing to her) when they do the obvious twist reveal, Last Christmas deserves the critical panning

Betting that he died Last Christmas and he's Michelle Yeoh's son, plot twist is she finds a photo of him at the store and he talks to his mum like Ghost (1990)

My best case scenario for this movie is an "It's a Wonderful Life" style twist where he's an angel (who also happens to be her organ donor?) sent to help her make the most of her last Christmas on earth before she dies, after which they get their HEA in the afterlife.

Despite what is already being regarded as a polarising and controversial rom-com, Last Christmas is worth a watch.

Yeoh is a highlight, Clarke is utterly delightful and although Thompson playing an immigrant from former Yugoslavia is confusing (if not a little problematic), the film has heart.

Have you watched Last Christmas? Are you planning on watching it before Christmas? Tell us in a comment below.

I picked the twist about halfway through. It was pretty brutal. Also, have you forgotten that Love Actually is actually pretty depressing in parts? Emma Thompson's and Laura Linney's characters certainly don't get happy endings.

And Feig specifically asked at the premiere not to give away the plot and ruin it for others to enjoy! No fair!!!