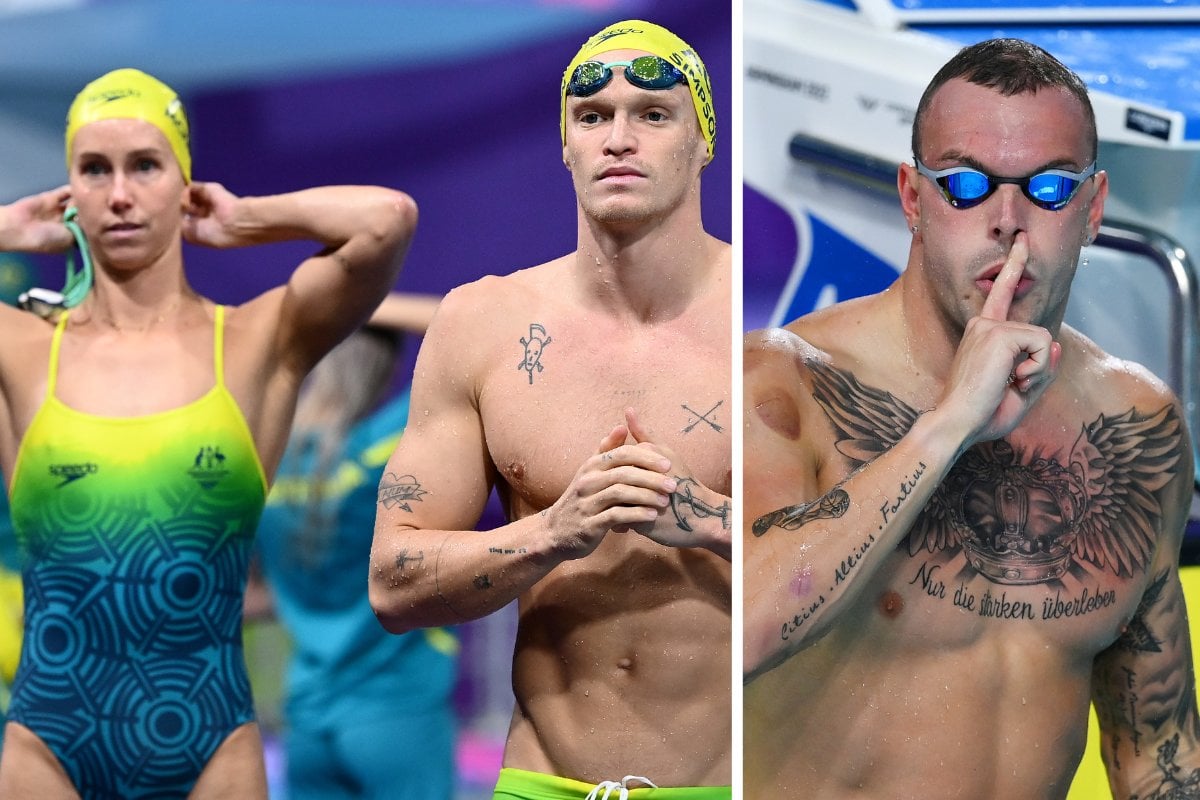 Following the men's 100m freestyle at the Commonwealth Games in Birmingham, Kyle Chalmers touched the wall, checked the results, then brought his index finger to his lips.

The Australian swimmer had just won gold - a medal he'd been working towards for six years, since becoming an Olympic champion at Rio in 2016.

But instead of cheering with excitement, he asked for silence.

"Normally I do a bit more of a powerful celebration after a win but... that probably means more than giving a fist bump or flexing the muscles," the 24-year-old told Channel Seven post-race.

"It is special to win, but unfortunately I think it is hard to enjoy the moment when all that has happened has gone on. It makes it a challenging time.

He added: "I hope nobody else has to go through what I have gone through."

For months now, Chalmers has been at the centre of tabloid fodder after made-up headlines described a "love triangle" between him and teammates, Emma McKeon and Cody Simpson.

Here's everything that's happened, and whether there's any truth to the narrative.

Why are people talking about Emma McKeon, Cody Simpson and Kyle Chalmers?

ICYMI, Emma McKeon, Cody Simpson and Kyle Chalmers are all swimmers, currently competing at the 2022 Commonwealth Games in Birmingham.

Emma McKeon, 28, and Cody Simpson, 25, are dating; and have been since early July. While McKeon previously dated Chalmers, 24, last year.

Despite most media outlets reporting on their swimming, various tabloids have been publishing gossip, forming a narrative about a love triangle between them.

(Despite none of them confirming one.)

As a result, the three have faced questions about the so-called rift during post-race conferences, when the focus should be on the results they're delivering.

McKeon has became the most decorated athlete in Commonwealth Games history after collecting gold on Sunday. Meanwhile, Simpson and Chalmers have also made it onto the podium - both having won gold too.

But while Simpson and McKeon have almost entirely ignored the fodder (Simpson has been at the centre of this kind of drama before, having dated Miley Cyrus), Chalmers has made various statements about it, sharing just how much harm it's causing.

"It's all just false news that's actually crap... It's words getting put in mouths and you wanting to make a story out of nothing," he said in a post-race conference.

The 24-year-old has said how if these rumours don't stop, he'll quit the sport.

"Up until this point I’ve tried to just keep on moving forward but tonight I ask that you please stop writing these false headlines otherwise my time in the sport will be finished," he said.

"I don’t swim for this, I didn’t get into the sport to have to deal with this. I swim to inspire and I swim because I love my sport and it gives me purpose. This could end my time in swimming, I hope you are all aware."

The swimmer also detailed how much of a toll it's taken on him and his family.

"It’s taking too much of a toll on my mental health. It embarrasses me that my family, my grandparents have to sit down and read the stuff that gets put in the media," he told reporters on Sunday.

"It upsets me that I have to go home to my mum crying on FaceTime to me."

Is there actually a love triangle?

Of course there isn't.

"It’s not even a true thing. Emma and I are great friends," Chalmers said on Sunday.

"We’ve been friends since 2015. We’ve been great support. She inspires me. She’s a person who’s inspired me every step of my professional career.

He added: "Cody is another guy who I’ve been inspired by [with] what he’s achieved in the last two years and it’s an honour to share the team with both of them."

The 24-year-old swimmer also addressed the most recent claims that he'd jilted McKeon when the pair had won gold in the freestyle mixed relay.

"I definitely said congratulations. If you watch the race back, I actually walk up and say good job across the pool," he told reporters.

He added: "I say good luck to Cody [Simpson], I sent him a message after the race. I do nothing but be as positive as I possibly can."

Australian swimming legend Grant Hackett told The Today Show the three have sat down to discuss the media frenzy.

"They’re professionals, they’re teammates, they get along with each other, they respect each other where they need to, and they go out there and they execute performances for the country and they support one another," he said.

"We always have that first week, and we always dominate usually, but that does come with a lot of pressure in terms of that performance. So this really distracts from some of the great performances.

"No one had any problems."

So let's get back to the swimming, shall we?