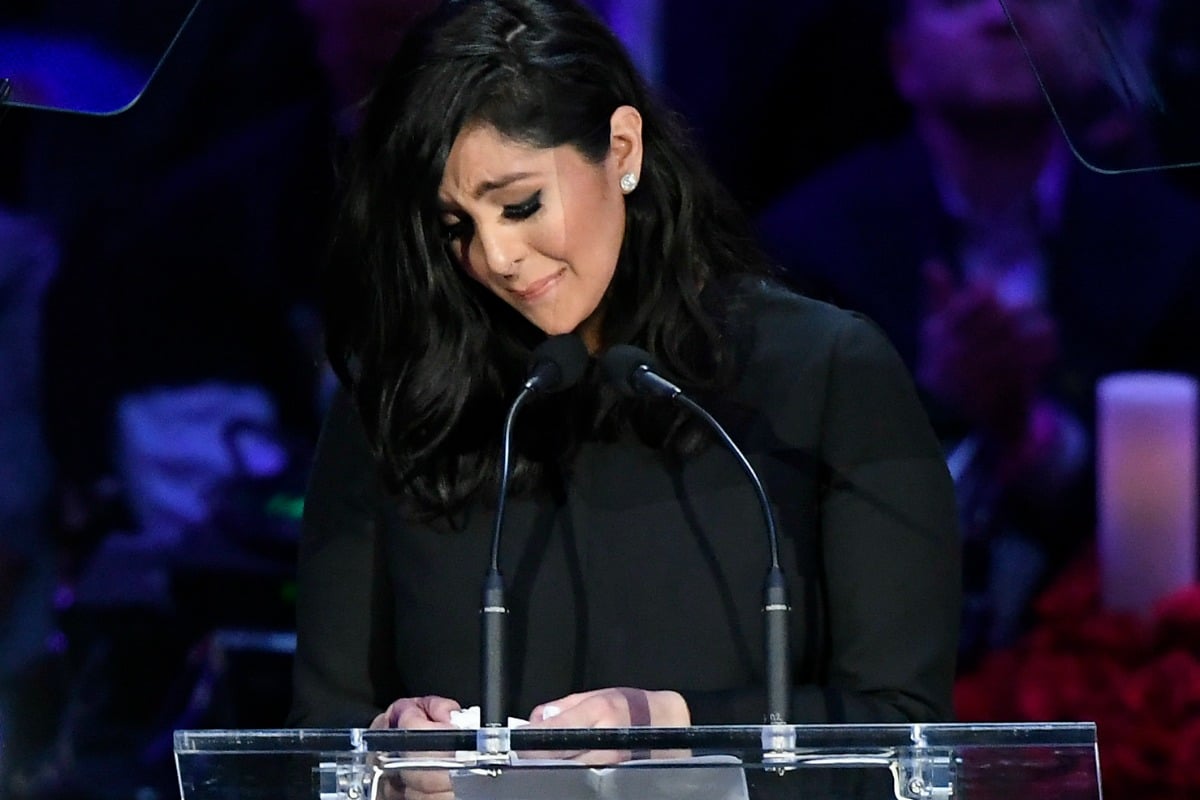 “They were so easy to love, everyone naturally gravitated towards them. They were funny, happy, silly, and they loved life.

“They were so full of joy and adventure. God knew they couldn’t be on this earth without each other. He had to bring them home to heaven together.”

A month on from the death of NBA great Kobe Bryant, and his 13-year-old daughter Gigi, Vanessa Bryant has addressed a 20,000 strong crowd at the Staples Centre.

Vanessa’s late husband, and one of their four daughters, were among nine people killed when their helicopter crashed in Calabasas on the way to one of Gigi’s basketball games.

As Vanessa Bryant walked on stage, the crowd stood to their feet in a unanimous cheer.

Well known for keeping clear of the spotlight and allowing Kobe, her famous husband, to take the lead - the mum-of-four took a deep breath before thanking the crowd for the outpouring of support and prayers since her loved one's deaths.

WATCH: Here is some of Vanessa's speech. Post continues after video.

"I'll start with my baby girl first," she told the crowd.

"My baby girl Gianna Bryant is an amazingly sweet, gentle soul. She was always thoughtful. She always would kiss me goodnight, kiss me good morning."

"She had my fire. My personality and sarcasm. She was tender and loving on the inside. She had the best laugh. It was infectious. It was pure and genuine," she said.

"I won’t be able to tell her how gorgeous she looks on her wedding day, never get to see my baby walk down the aisle, have a father-daughter dance with her daddy, dance on the dance floor with me or have babies of her own.

"Gianna would have been an amazing mommy. She was very maternal ever since she was really little. Gigi would have most likely become the best player in the WNBA."

My girls and I want to thank the millions of people who’ve shown support and love during this horrific time. Thank you for all the prayers. We definitely need them. We are completely devastated by the sudden loss of my adoring husband, Kobe — the amazing father of our children; and my beautiful, sweet Gianna — a loving, thoughtful, and wonderful daughter, and amazing sister to Natalia, Bianka, and Capri. We are also devastated for the families who lost their loved ones on Sunday, and we share in their grief intimately. There aren’t enough words to describe our pain right now. I take comfort in knowing that Kobe and Gigi both knew that they were so deeply loved. We were so incredibly blessed to have them in our lives. I wish they were here with us forever. They were our beautiful blessings taken from us too soon. I’m not sure what our lives hold beyond today, and it’s impossible to imagine life without them. But we wake up each day, trying to keep pushing because Kobe, and our baby girl, Gigi, are shining on us to light the way. Our love for them is endless — and that’s to say, immeasurable. I just wish I could hug them, kiss them and bless them. Have them here with us, forever. Thank you for sharing your joy, your grief and your support with us. We ask that you grant us the respect and privacy we will need to navigate this new reality. To honor our Team Mamba family, the Mamba Sports Foundation has set up the MambaOnThree Fund to help support the other families affected by this tragedy. To donate, please go to MambaOnThree.org. To further Kobe and Gianna’s legacy in youth sports, please visit MambaSportsFoundation.org. Thank you so much for lifting us up in your prayers, and for loving Kobe, Gigi, Natalia, Bianka, Capri and me. #Mamba #Mambacita #GirlsDad #DaddysGirls #Family ❤️

Describing her as the family's "shepherd", Vanessa said Gigi kept the family together with her love for traditions and had a smile of pure "sunshine".

"Now for my soul mate," Vanessa said, as her eulogy moved on to her husband.

"Kobe was known as a fierce competitor on the basketball court. The greatest of all time, a writer and Oscar winner, and the Black Mamba. But to me, he was Kobe - Kobe, my boo-boo, my bay-boo. My papi chulo. I was his Vivi, his Principesa, his reina, his Queen Mamba, and his friski-mineski, dabeli-ski. I couldn’t see him as a celebrity, nor just an incredible basketball player."

Vanessa met Kobe when she was just 17.

"We really had an amazing love story. We loved each other with our whole beings. Two perfectly imperfect people making a beautiful family, and raising our sweet and amazing girls," she told the crowd about their relationship.

"He was truly the romantic one in our relationship. I looked forward to Valentine’s Day and our anniversaries every year. He planned special anniversary trips, and a special traditional gift for every year of our marriage.

"He even had made my most treasured gifts, he just thought outside the box it was so thoughtful, even while working hard to be the best athlete," she said, recalling a time when he bought her a blue dress like the one worn by Rachel McAdams in The Notebook.

"A couple of weeks before they passed, Kobe sent me a sweet text. It mentioned how he wanted to spend time together. Just the two of us without our kids, because I’m his best friend first. We never got the chance to do it," she said.

Describing Kobe as the "MVP of girl dads, or MVD," Vanessa said her husband always told his girls how beautiful and smart they are.

"He would sing the silly songs in the shower and continue making them laugh and smile as he lathered them with lotion and got them ready for bed. He had magic arms that could put them to sleep in only a few minutes. He said he had it down to a science, eight times up and down our hallway."

As her speech came to an end, Vanessa addressed both her husband and daughter: "They were so easy to love everyone naturally gravitated towards them. They were funny, happy, silly, and they loved life. They were so full of joy and adventure. God knew they couldn’t be on this earth without each other. He had to bring them home to heaven together.

"Babe you take care of our Gigi, I got Nani, BB, and Coco. We are still the best team. We love and miss you booboo and Gigi. May you both rest in peace, and have fun and have fun in heaven. Until we meet again. We love you both, and miss you. Forever and always, Mommy."

Beyonce, Alicia Keys, and Jimmy Kimmel among those paying respects.

"I’m here because I love Kobe and this is one of his favourite songs,” she said before launching into a special rendition of XO.

She was accompanied by singers and a string quartet, and wore a gold pantsuit.

As she started the first verse, her voice shook so much she told the crowd: "I want to start that over. But I want us to do it all together, and I want you to sing it so loud that he hears your love".

"You picked the wrong person to guide you through," he told the crowd, as his voice shook.

"This is a sad day, but it's also a celebration of their lives," he said before introducing Kobe's widow to the stage for her eulogy. He mentioned that it was Vanessa who had invited them all there today because she "knew we needed it".

Basketballer Michael Jordan broke down in tears during his tribute, and said Kobe was like "a little brother".

"But then it turned into a certain passion. This kid had a passion like you would never know," he said.

As tears streamed down his face, Jordan told the crowd: "I'm going to have to look at another crying meme for the next...," as the crowd laughed.

"Now I'll have to look at another crying meme...THAT is what Kobe Bryant does to me." - Michael Jordan. He's not wrong. ????❤️ #TwentyFourever pic.twitter.com/1kQ8W4a90h

She played Beethoven's Moonlight Sonata - a moving tribute to Kobe as it was a song the basketballer had himself learnt to play.

As the memorial got underway, news broke that Vanessa Bryant was suing the helicopter owner over the death of her husband and daughter.

The wrongful death lawsuit filed today said the pilot, Ara Zobayan, was careless and negligent by flying in cloudy conditions and should have aborted the flight.

Investigations into the cause of the crash in Calabasas are ongoing, but it has been confirmed there was no sign of mechanical failure.

A final report isn’t expected for another year.