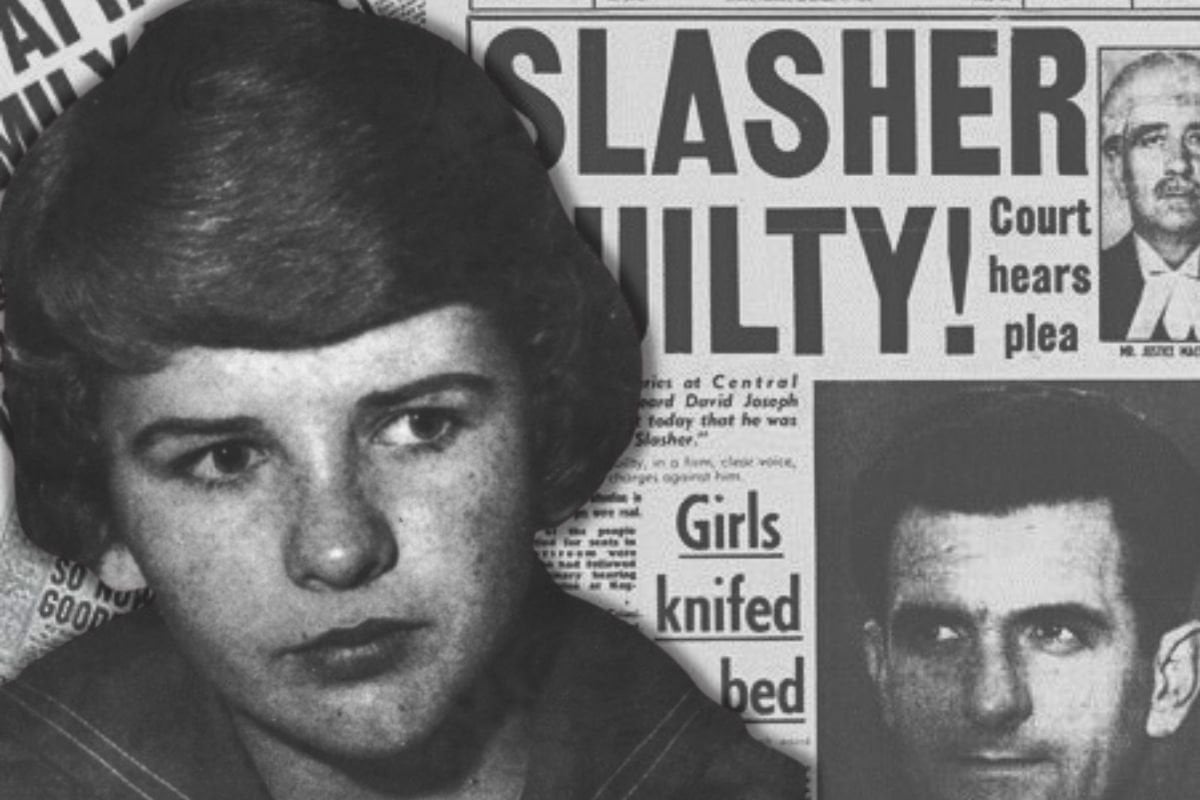 It was 3am when 12-year-old Marlene Storz woke to find a man standing at the foot of her bed in July 1956.

Her family were tucked up asleep in separate rooms of the south west Sydney home, while beside her, her grandmother also lay undisturbed.

"Is that you Hans?" she called out, thinking the shadowy figure was her brother.

The stranger was holding a razor blade in his hand. Once he was beside Marlene's bedside, he slashed her blankets several times, leaving gashes up to 15 centimetres long.

Thankfully, none touched her skin.

After startling her awake, the man immediately jumped out of her window and made his escape.

That morning was the first time David Joseph Scanlon attacked someone in their home. Usually he just lurked.

He'd later tell police he'd enter every house in a single street prowling around local suburbs for hours on end in the middle of the night.

"He started just as a peeping Tom climbing over fences and watching people through their windows," Glen Humphries, author of Night Terrors: The True Story of the Kingsgrove Slasher told Mamamia's True Crime Conversations podcast.

Listen to the full chat below. Post continues after podcast.

"Then it escalates to him going into their house standing in their bedroom watching them sleep, or sitting on the lounge watching them as they get up to go to the toilet."

He'd go on to attack a total of 18 women and girls over three years, with the media of the time dubbing him the 'Kingsgrove slasher.'

From 'slasher bars' to an escalation of violence.

If you drive through Kingsgrove and its surrounding suburbs today, you'll see prison style bars on the ground-floor windows of some homes.

They're slasher bars. Designed to stop the mysterious 'Kingsgrove slasher' of the 1950s from entering.

As Humphries explained to True Crime Conversations, the hysteria at the time was very real with women taking to sleeping with weapons under their pillows.

"Everybody thought any noise they heard outside was the slasher," he said.

21-year-old Lesley Coleman was attacked in her sleep after her boyfriend failed to shut the front door properly. 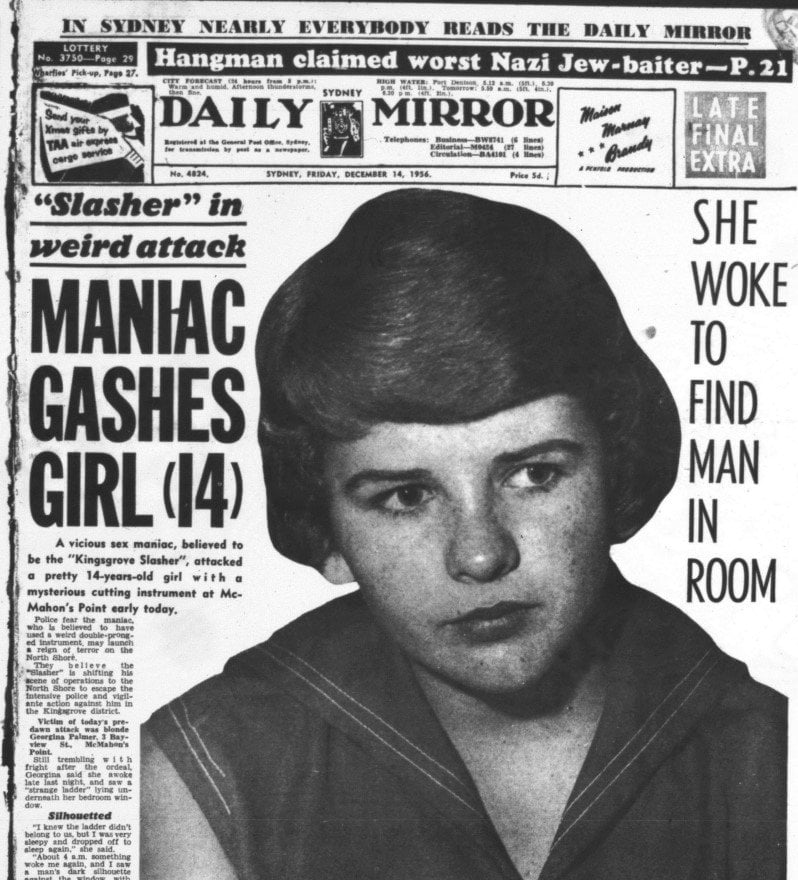 In an escalation on his attack on Marlene, Scanlon didn't just slice her bedsheets - he sliced her chest, groped her breasts with such force he left red marks and bruising and punched her in the face.

"Her teeth were all broken [and] she had to get surgery for other injuries to her face. There was also talk about blood being splattered on the wall and on the roof at the time," said Humphries.

A seven-year-old girl and a 12-year-old girl both had their pyjamas slashed in the night, but it wasn't until a 16-year-old victim caught a glimpse of Scanlon in her room that police had any kind of description to work with.

"She saw him walk to the window and look out... the streetlight outside caught his face," said Humphries.

She told officers the man was aged between 20-25, was well built and had a mop of wavy hair.

In November 1956, he climbed through the window of Rosalie Meyer. He groped her, slashed her pyjamas and hit her face with a block of wood several times.

"She obviously woke up at some stage because she had defence wounds on her fingers and hands from trying to ward off the blows," said Humphries.

At one point during his reign, the 'Kingsgrove slasher's' hunting ground extended to Sydney's north, which police would later find out was because Scanlon moved house for a brief period.

He also took a break for 455 days from slashing, later saying that was because "he had tried to calm down for the sake of his wife".

But pretty soon he was back prowling the familiar streets of south west Sydney, after moving back to the area.

He attacked a 13-year-old, who he attempted to strangle, and a 64-year-old woman who was left with a 12 centimetre gash on her abdomen.

He'd attack five more victims before being caught by police in May 1959.

"People always expect criminals, especially someone whose been a bogeyman walking around the area slashing people, punching people, groping, strangling, is going to be some heinous monster. But he just looked like an ordinary guy," Humphries told True Crime Conversations.

"Almost like a B-grade film actor in terms of his looks....he didn't look scary. He didn't look frightening."

Scanlon was a 29-year-old married office clerk with a normal 9-5 job in the city. 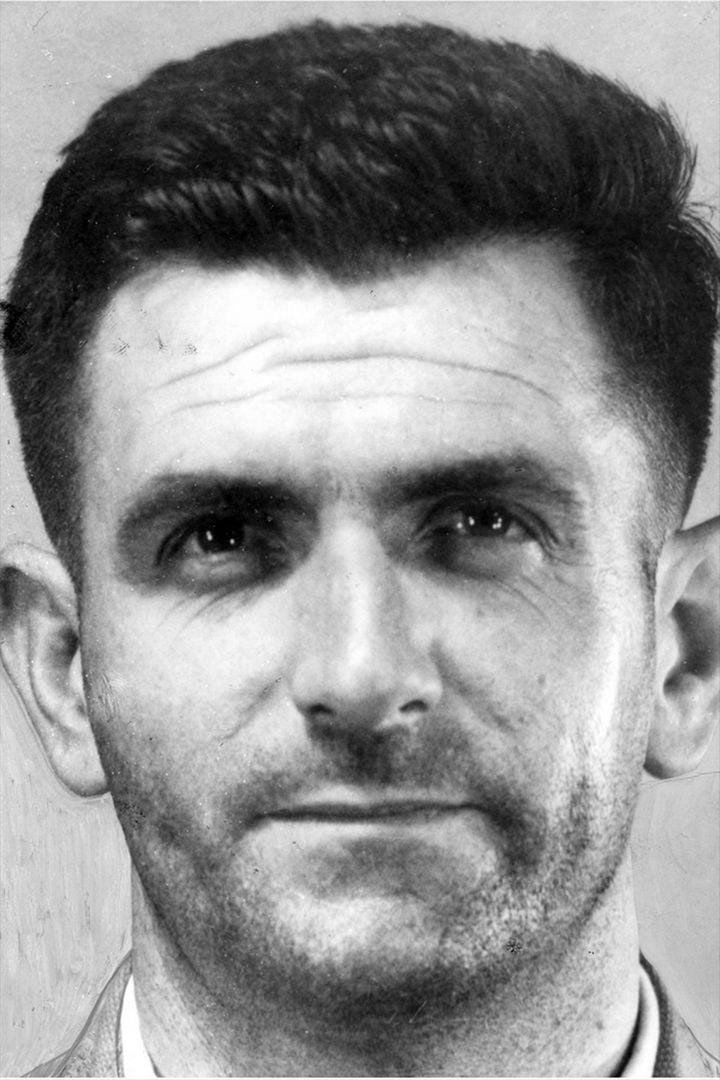 He'd tell his wife he was working late, take the train home - change into his 'prowling' outfit - and spend his evenings terrorising Sydney.

She had no idea. She'd even asked Scanlon to install slasher bars on their windows unaware that he actually had a key.

When he was unveiled as the slasher, (he admitted to it straight up as soon as he was caught), police took him home to tell his wife.

"Detective Doyle took him to their house and they both stood in front of his wife. [Scanlon] looked to Doyle as if to say, 'Well, are you going to say something?' And Doyle says, 'No, this is your wife, you've got the responsibility, tell her.' And he basically says, 'Love, I'm the Kingsgrove slasher'," said Humphries.

"She was just struck completely dumb. She'd been living with this guy and had absolutely no clue that anything was going on."

Scanlon pleaded guilty to 18 offences against women and girls and was sentenced to 18 years in jail.

The only explanation he gave for his crimes was that he loved the "thrill of the chase."

He was released in March 1970 after 10 years behind bars, went on to remarry and have children in NSW.

He died in 1995, aged 65, with Humphries telling True Crime Conversations his gravestone reads "loving father and grandfather," which by all accounts he was.

But he was also the Kingsgrove slasher - a man who instilled fear in the people of Sydney for three years, leaving many of his victims terrified of the night, and scared to sleep alone.