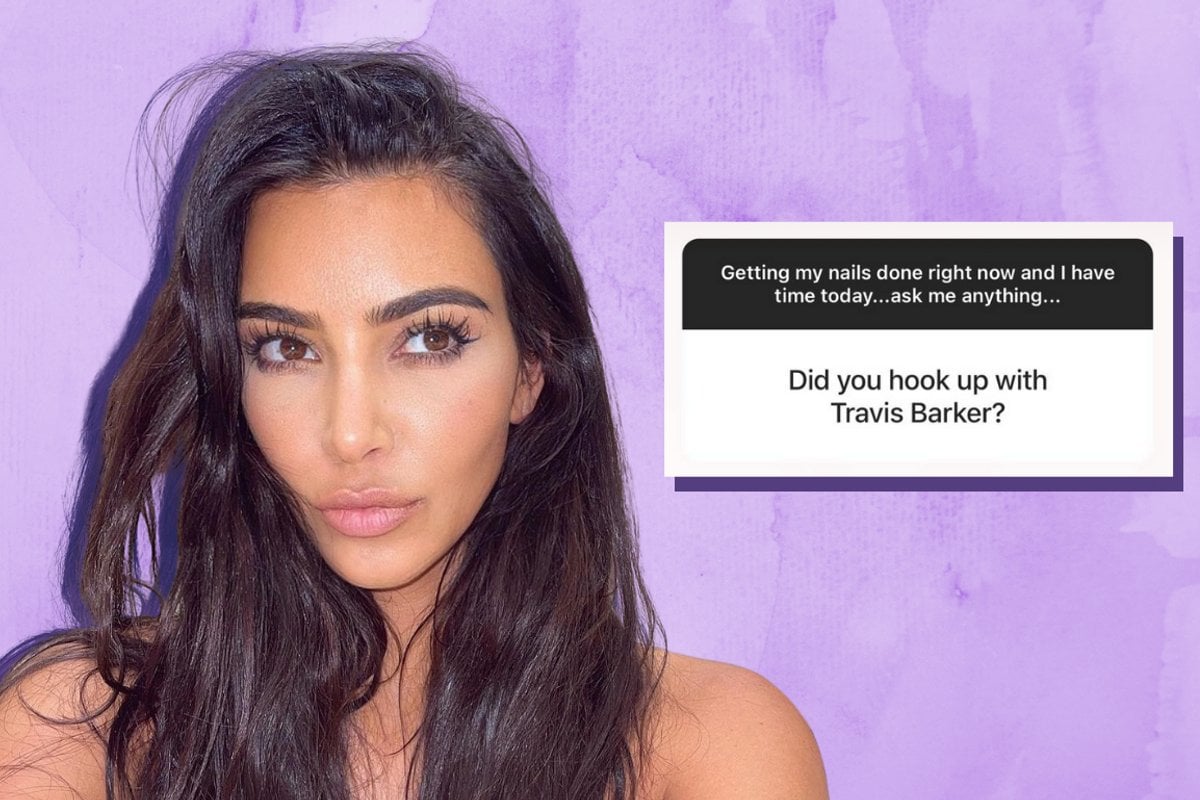 1. A microscopic investigation into whether Kim Kardashian slept with her sister's boyfriend.

Kim Kardashian wants to set the record straight about those Travis Barker rumours. And yes, we are listening.

Before we get into it, there's been lots of whispers going around that Kim Kardashian slept with the Blink-182 drummer, who also happens to be dating her older sister, Kourtney Kardashian.

Earlier this month, Travis' ex-wife Shanna Moakler claimed that she split from Travis because he cheated on her with Kim.

"I divorced my ex because, I saw them — I caught them having an affair," she told told Us Weekly.

Now, Kim has shut down the rumours, in the way all celebs love to spill tea - by posting an Instagram Q&A.

"Getting my nails done right now and I have time today. Ask me anything," the 40-year-old wrote earlier today.

Of course, one fan was quick to ask about the rumours, writing, "Did you hook up with Travis Barker?"

"We’ve been friends for years and I’m so happy for him and Kourt." 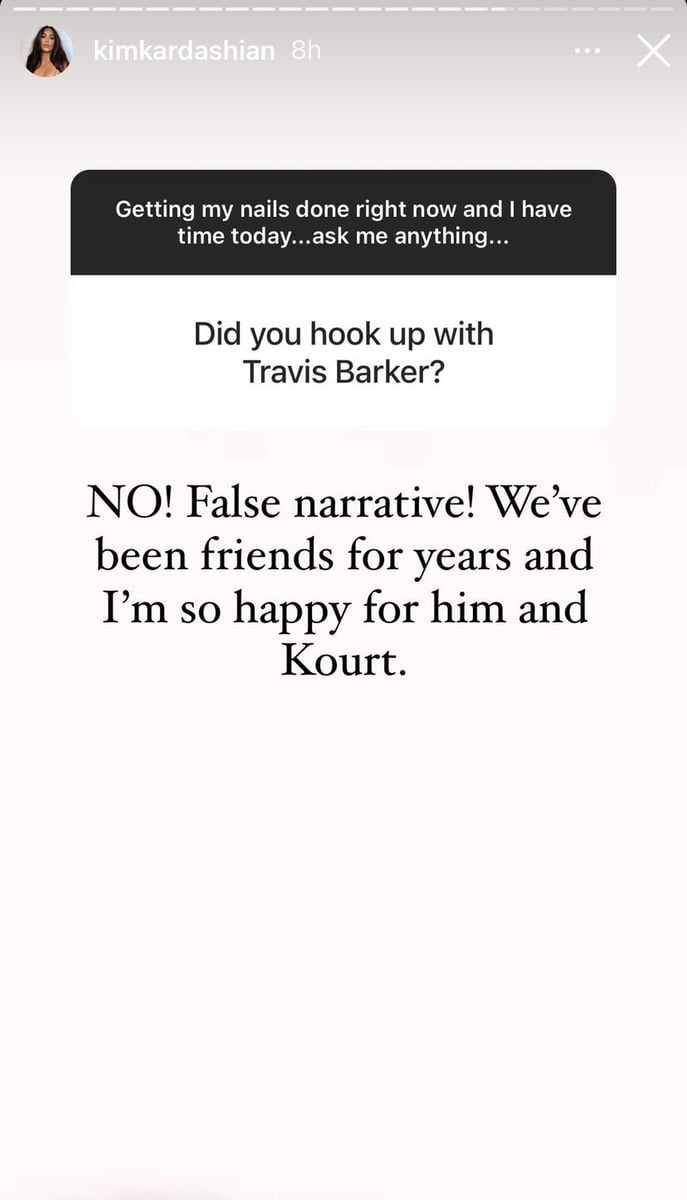 It comes after a 2015 interview where Travis admits he "had a crush" on Kim, recently resurfaced online.

"How could you not stare at Kim? I enjoyed hanging out with Paris, but I love curvy girls. Kim was eye candy. I couldn’t keep my eyes off Kim," he told Us Weekly.

2. Rumour has it Kelly Clarkson will be inheriting Ellen DeGeneres’ TV show, and Twitter is aflame with opinions.

It looks like Kelly Clarkson will be taking over the Ellen DeGeneres' prime daytime TV slot. And Twitter has some strong feelings about it.

The Kelly Clarkson Show, which is only in its second season, was allocated the spot after it was announced that it had been renewed until 2023.

"The Kelly Clarkson Show is one of the most optimistic success stories in first-run syndication," said Tracie Wilson, executive Vice President of NBCUniversal Syndication Studios.

"Kelly and our entire production team put their heart, intent and incredible passion into making a show that resonates with people of all ages, cultures and backgrounds. We’re working on some big plans for season three and are looking forward to becoming the premier show in daytime for years to come."

It comes after The Ellen DeGeneres Show was cancelled after almost two decades.

"When you’re a creative person, you constantly need to be challenged – and as great as this show is, and as fun as it is, it’s just not a challenge anymore," Ellen told The Hollywood Reporter earlier this month.

I will not rest until Kelly Clarkson runs the entire entertainment industry.

Kelly Clarkson predicted her Ellen take over from the beginning 😂 pic.twitter.com/V0qOQrmdOs

The way @kellyclarkson went from reality star to pop star to coach to replacing Ellen on TV is totally my fantasy. What a wild 20 year career

3. Brad Pitt and Angelina Jolie have been in a custody court case for yonks. We now have a verdict.

It's been almost five years since Brad Pitt and Angelina Jolie started their divorce proceedings and court battle. This week, the former couple reached a verdict.

"He's so relieved. His only intention is to spend more time with the kids," a source told Daily Mail.

However, a source told Page Six that Jolie will "continue her legal fight".

The former couple's court battle has been riddled with complications. According to Us Weekly, the documents, which were filed on Friday, March 12, state that Jolie and their children are willing to offer "proof and authority in support" of these allegations against Pitt. The actress also agreed to provide testimony, along with the "testimony of minor children".

In February of this year, Jolie, 45, admitted that the ongoing divorce proceedings have been difficult.

"The past few years have been pretty hard. I’ve been focusing on healing our family. It’s slowly coming back, like the ice melting and the blood returning to my body," she told British Vogue.

Jolie and Pitt have been battling over the custody of their children since their divorce was filed on September 20, 2016.

4. IT'S HAPPENING: Big will be coming back for the Sex & The City reboot.

Yep. You read that right.

Chris Noth will reprise his role of Mr Big in the much-anticipated Sex and The City reboot, And Just Like That...! 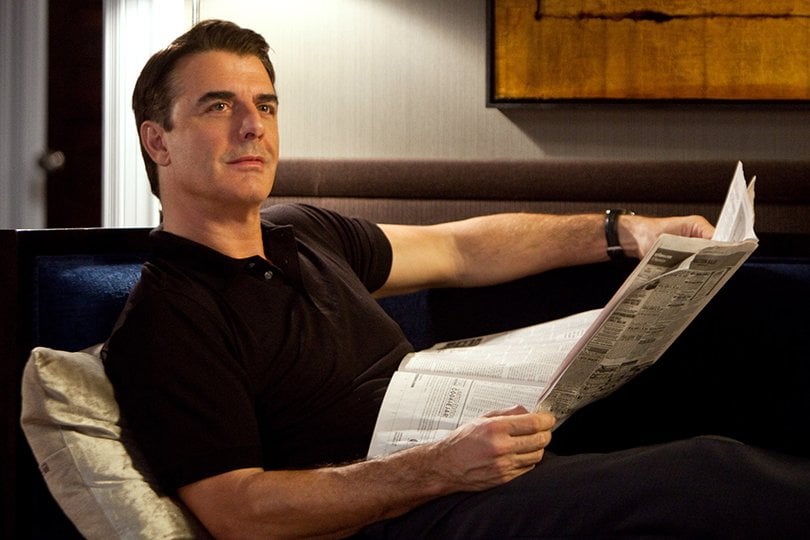 Image: HBO. After months of speculation, HBO confirmed the news this week with a statement from executive producer Michael Patrick King.

"I'm thrilled to be working with Chris again on And Just Like That…," King said. "How could we ever do a new chapter of the Sex and the City story without Mr Big?"

While we don't have an official air date, we know And Just Like That... will have 10 half-hour episodes and filming starts soon.

5. A short-lived engagement and an intimate wedding: A timeline of Ariana Grande's relationships.

After getting secretly married earlier this month, Ariana Grande and Dalton Gomez have shared the first photos from their intimate wedding.

The singer and luxury real estate agent were married at Grande's home in Montecito, California on May 15.

"It was tiny and intimate — less than 20 people. The room was so happy and full of love. The couple and both families couldn’t be happier," Grande's representative told People.

The pair first announced their engagement in December 2020 after 10 months of dating.

Although it's unclear how the couple first met, Gomez, 25, works in Los Angeles as a luxury real estate agent.

Amid the couple's wedding news, we decided to take a look back at Ariana Grande's relationship history.

If you're an Australian under the age of 25, you'll probably remember The Janoskians.

The Melbourne group quickly gained traction online when they started their YouTube channel in 2011.

And once Ariana Grande got involved, the group blew up overseas.

In 2012, two members of the group, twins Jai and Luke Brooks, started a competition to see which one could get Grande's attention.

After Grande's mother, Joan Grande, saw the group's YouTube video, she told the up-and-coming singer to respond to one of the twins.

Check out the full timeline of Ariana Grande's relationships, in our earlier article here.