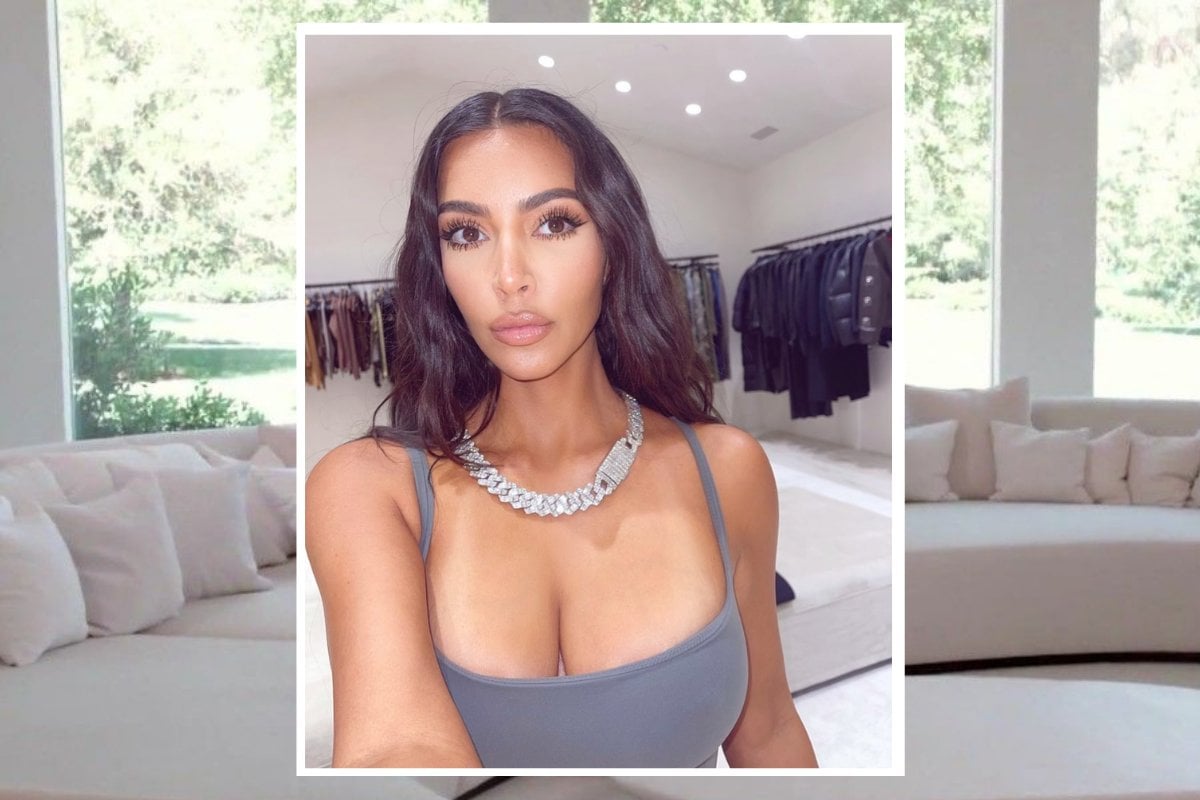 1. Kim Kardashian is being sued by her house staff, and the claims against her are wild.

Despite Kim Kardashian recently taking the 'baby bar' and committing to getting her law degree, it seems she's in a bit of a legal pickle herself...

Because Kim Kardashian is being sued, by her own house staff, for essentially being a s**tty boss.

Seven ex-employees claim that they were "never paid on time" and that they had 10 per cent of their wages docked for tax – which then suspiciously never made it to the tax man. (This is obviously super illegal, so is a serious accusation against the Kardashian household.)

The ex-employees state that they never received pay statements, and there was no formal tracking of their hours - meaning that Kim could ignore the overtime the workers claimed they did.

Watch Kim Kardashian and Kanye West quiz each other on home design. Post continues after video.

In the mix of the complainants is a 16-year-old who states he was "made" to work hours well in excess of the legal limit of 48 hours a week during the school holidays.

Kim's legal representative have plainly stated: "Kim has never not paid a vendor for their services and hopes that the issue between these workers and the vendor who hired them can be amicably resolved soon," explaining that Kim didn't actually hire the staff directly and that they were instead managed by a third-party vendor.

However, the lawsuit has been filed against Kim Kardashian herself, so looks like she'll be dealing with a few legal meetings regardless.

Listen to the latest episode of The Spill, where hosts Laura Brodnik and Kee Reece discuss why Hollywood really turned on Lindsay Lohan. Post continues after podcast.

To add insult to injury, Kim's ex-husband Kanye West is also facing lawsuits from one of his Yeezy employees and previous back-up singer over 'bad labour practices' - so there are a lot of eyes on the family at the moment.

2. The first Celebrity Apprentice feud is underway and trash talk is coming out of Camp Camila.

Celebrity Apprentice only just kicked off on Sunday and there's already some beef going down behind the scenes.

Speaking to Nova's Fitzy & Wippa on Monday, fashion designer Camilla Franks shared the one castmate she didn't get along with so well. And by that we mean, drove her "absolutely mad".

"I’m used to working with a Formula One team, then all of a sudden I get the go cart team! Martha drove me absolutely mad, I found it really hard to work with Martha. She can be painful," she told her fellow contestant Michael 'Wippa' Wipfli.

"I love her to pieces, but I don’t want to work with her – I want to have a cocktail with her," she added.

Camilla also explained that she had a bit of drama with The Block's Shaynna Blaze.

"We had our moments. I think everyone starts grating on you after sleep deprivation and long hours, and I’ve definitely got a unique way of managing people and leadership style."

3. Natasha from MAFS has announced her engagement.

The financial analyst announced the news on Thursday, sharing details about how her beau, Gary Green, proposed.

"It is all pretty fresh," the 28-year-old told The Advisor.

Natasha explained the proposal took place on board a chartered seaplane over Sydney Harbour, where Green presented her with a "ridiculous" five-carat ring. A ring, which she designed.

"It just happened. It is a pretty ridiculous ring," she said.

"I semi-designed the ring. I've got to look at it for the rest of my life, so I had to be sure," Natasha told the Daily Mail.

Before the proposal, Green asked for her parents' permission.

"It was sweet. He asked my dad over dinner and my mum was there, too," she said.

In case you forgot, Natasha was 'married' to Mikey Pembroke on season seven of MAFS.

4. Lindsay Lohan is making her movie comeback, in a Christmas rom-com. And that’s a massive yes from us.

For the past decade, Lindsay Lohan has stepped away from acting. Now, the 34-year-old is set to return to the big screen in a Netflix Christmas rom-com.

In the little details that have been released, Netflix shared Lohan will play a "newly engaged, spoiled hotel heiress" who loses her memory in a skiing accident and "finds herself in the care of a handsome, blue-collar lodge owner and his precocious daughter in the days leading up to Christmas".

No further cast details have been announced.

Sadly, the Christmas rom-com doesn't start filming until November this year (*cries*), but we're just excited to see the '00s star heading back to the screen when it eventually comes out.

5. An on-set intervention and a real-life pregnancy: 11 things you didn't know about Friends.

After years of anticipation, Friends is finally returning to our screens.

This week, the long-rumoured reunion special will air worldwide in honour of the show's 25th anniversary.

And yes, all six cast members will be returning for the special.

While the special won't follow the usual format of a regular episode, we'll get to see the cast reunite, revisit the sitcom's set and share behind-the-scenes footage.

Australian viewers will be able to watch Friends: The Reunion at 5.02pm AEST on Thursday, May 27.

But until then, here are 11 things you didn't know about the much loved sitcom.

When Matt LeBlanc landed the role of Joey on Friends, he had just $11 to his name.

"Friends, when it came my way, was my fourth TV series – and the other three had failed," LeBlanc shared, according to The Independent.

"I had exactly $11 in my pocket the day I was hired. I had to go back and read for the part of Joey a total of six times. It was far from certain I would get the role."

After he got the role, LeBlanc treated himself to a hot meal. Courtney Cox, on the other hand, bought a car.

Reply
Upvote
I think Lindsey Lohan is a great actress, it's good to see her getting back in the game.

Reply
Upvote
"A unique way of managing people", that sounds like a euphemism of some sort for sure! That's like the obituaries where people are described as someone who "didn't suffer fools gladly" (was a rude sod), or as a "raconteur" (a drunk who wouldn't shut up). A "unique way of managing people" could be "has no clue what they're doing", or "grumpy bastard" - or "she assigns us work based on our star signs".
News
General
Opinion
True Crime
Politics
Sport
Explainer
Entertainment
Celebrity
Reality TV
Movies
TV
Books
Rogue
Royal
Lifestyle
Beauty
Fashion
Weddings
Home
Wellness
Health
Fitness
Travel
Food
Parents
Before The Bump
Pregnancy
Baby
Kids
Teens
School
Parent Opinion
Work & Money
Money
Finance
Career
Lady Startup
Relationships
Sex
Dating
Separation
Friendship
Family
Real Life
Couples