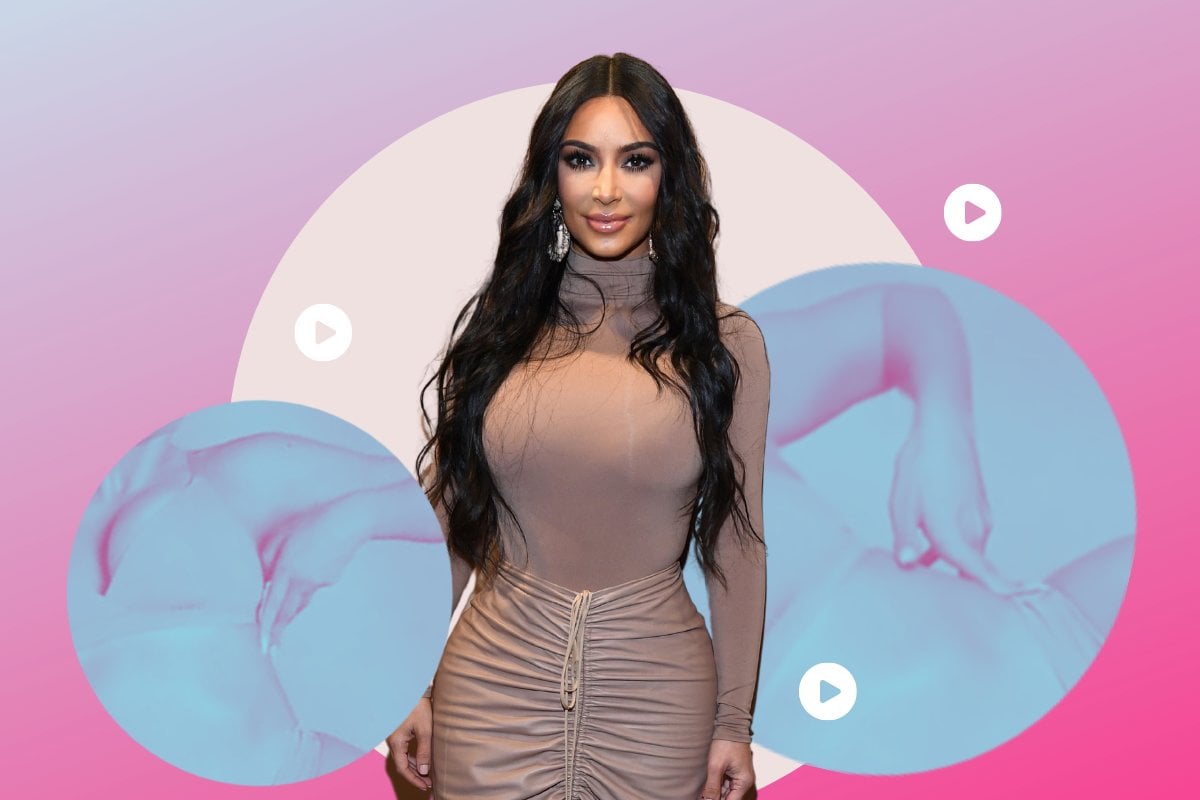 Kim Kardashian has faced her fair share of accusations for photoshopping and editing her images, and she will most likely continue to face them for the rest of time.

But the most recent example of this, involving a video ad for her shapewear company, Skims, might be the most bizarre so far.

A video of the commercial went viral this month, showing Kardashian, 40, stretching the waistband of her underwear before running her hand up her waist.

Watch: Speaking of the Kardashians, KUWTK finishes up THIS WEEK. Post continues below video.

In the ad, Kardashian says "it bounces right back" as she pulls her underwear away.

It's pretty standard advertising for the brand, except for the way in which her finger appears to distort during the process. It too bounces back... after turning unnaturally wavy during her movement.

TikTok user Alex Kelly shared the clip online, and it quickly led to backlash right across the internet.

Comments pointed out that the Kardashians have been shaping beauty standards for well over a decade, and now themselves appear to be struggling to maintain it. This was also a conversation that took place in April, after an unedited photo of Khloe Kardashian circled the web despite her team working around the clock to take it down.

"Adverts are not true. Body shapes are contorted and then it’s all used to sell you products to fix the problem they caused. And I'm so glad it’s increasingly being called out and people are being held responsible," body positive Instagrammer Charlotte Peirce wrote.

Again, this isn't that unusual. A Google search brings up a lot of results about Kardashian-Jenner editing fails, and some publications even have round-ups of the family's most notable.

What makes this particular instance different to the many other times the family have been accused of photoshopping their content is the fact that Skims have addressed the controversy directly.

And refuted that it ever happened.

On Monday, a spokesperson for Skims told Page Six the distortion was not a bad photoshop job, but a technical glitch that occurred during the ads uploading process.

"The Skims commercial that aired last week featuring the Fits Everybody collection did initially have an error as a result of the video losing its quality during the uploading process," they said.

"Immediately after it was noticed by the team, the video was pulled, and the glitch-free version was uploaded and ran for the remainder of the time on air. We apologise for any inconvenience this has caused Kim and our customers."

It's an interesting explanation, and unsurprisingly there are many people who do not believe it to be true. However, Page Six purports to have seen the non-glitched ad, which it says does not appear to have been altered.

The spokesperson also told the publication Kardashian had requested her waist not be edited for the ad and that no part of her body was digitally retouched.

No matter the truth, it surely won't be long before this story is overtaken by another Kardashian editing scandal.