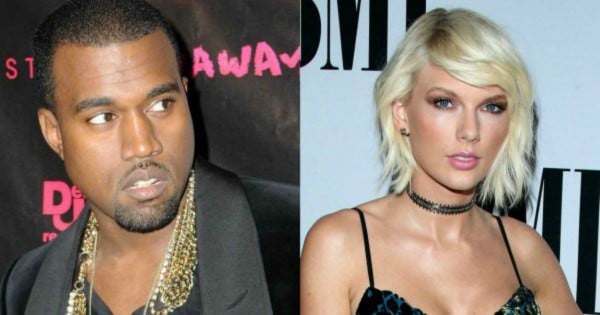 Theirs is the celebrity feud that never ends.

Just when you think that whole Kim Kardashian/Kanye West vs. Taylor Swift vs. Calvin Harris was slowing down and disappearing off your social media feeds forever, it rears its ugly head once again.

This time, two of Taylor’s biggest critics have teamed up, adding further fuel to the fire.

Kim Kardashian was spotted parting with Taylor’s ex, Calvin Harris – who famously went on a Twitter rant against the starlet earlier this month – at Jennifer Lopez’s birthday celebrations over the weekend.

Yeah, we didn't know they were friends either. But I guess, "the enemy of my enemy is my friend", right?

Prior to the party, both Kim and Calvin posted Snapchats of themselves singing along to some of Kanye's hits - Kim even mouthed the words to THE SONG THAT STARTED IT ALL, Famous.

Nope, she's not letting it go. Of course, Kim was responsible for sending the drama over the lyrics mentioning Taylor's name in the first place, sharing a series of videos on Snapchat that appear to show the young singer approving the lyrics with Kanye.

After initially responding to the release of the videos with a statement on social media, Taylor has remained tight-lipped on the situation, even when her ex-boyfriend is hanging out with her public enemy number one.

Hands up who's ready to give TayTay the crown of #BetterPerson in this whole saga?

Taylor perpetually plays the victim. Her MO has long been writing about other people (without any subtlety) without their permission or prior knowledge. She is the queen of tightly controlling her PR and image and using these opportunities to boost herself into the spotlight. Then a rapper writes a throw away line about her in his song - attempting to gain further mileage on the whole Taylor/Kanye ongoing drama and let her know prior to its release (a courtesy that he didn't need to extend to her). She doesn't like the reaction from the public regarding the line or suddenly no longer likes it and lies. Could have said "yes he contacted me but it's not the line I approved" - if that is the case, but no - she outright denied she was aware of it. She played the victim - a role she has played on for years. In reality she is a grown woman with astronomical success - she tarnishes her reputation by stooping to such petty lows. So no - I don't think she is the better person, I think she should be accountable for the games she chooses to play. She can't control everything.

The "throwaway line" was Kanye saying he thinks he'll have sex with Taylor, because he "made that bitch famous". That's derogatory in my mind, stripping her of her fame and talent and putting it all on him.
I'm not saying Taylor's perfect, but that song line is not something I'd want written about me.
Also, it doesn't matter if she writes songs about other people, as long as she doesn't name them or identify them. Most songs have been written about particular people, but it's only offensive to you when Taylor does it?

I don't know, I have never been very impressed by Taylor's inclination to settle (often quite petty) disputes by making others the subject of her songs or the subject of one of her social media rants. You are right that she rarely uses names, but it is usually clear who she is talking about. That said I have no time for Kim or Kanye and that line about Taylor is revolting. I think all three of them need to grow up. Sorry make that four, Calvin Harris is hardly an innocent observer in all of this.

Ok, I don't exactly understand what this really is about, but it doesn't seem that serious in the scheme of things? Do the kardashians lack in the hobby department or something? I feel like somebody needs to send them a scrabble board or something so they have anything to do that isn't this.

I think it's pretty funny. For someone who is usually so in control of her image and the information about her that is made public, all of this must be really pissing off swift.

She's got absolutely no control over any of it and it must be driving her nuts. And i suspect that's part of why kim keeps stirring it up.

It's kind of funny to wind up really uptight people.

Taylor's career is also about attention. Yes, she has some talent on top of that. But a big part of her brand is based on her carefully-crafted personality and image. She wouldn't be half as popular as she is if no one paid attention to that. Her music isn't that good.

All popular artists have to promote their image to a degree, but that is all the K's have, nothing of substance at all.