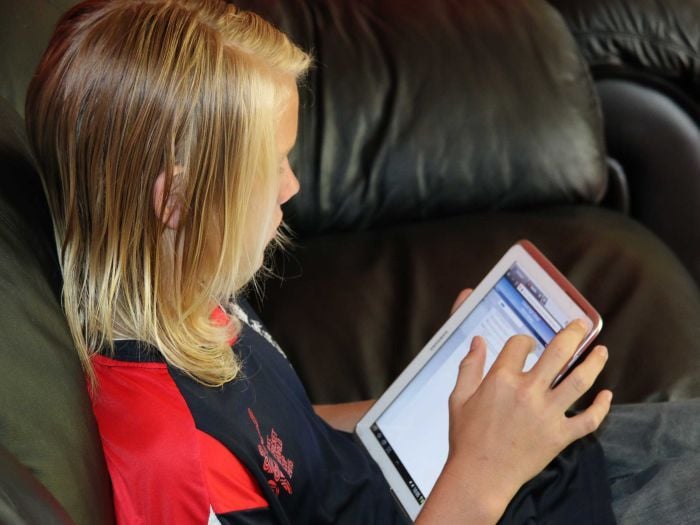 Children now spend more time on the internet than watching television, according to a survey of young Australians aged six to 13.

The online figure is nearly double the time reported in 2008 when the survey, conducted by research company Roy Morgan, began.

“It’s been coming for a while, but it was about mid-2016 when internet finally overtook television in terms of time spent,” Sean Ellis, researcher with Roy Morgan, said.

Researchers conducted face-to-face surveys of about 2,500 children across Australia throughout the year.

While television was still the number one entertainment of choice at home, internet use was expected to surpass TV in the next two years.

The results correlated with the increased use of mobile and tablet devices by children outside the home such as at school, on the bus, or when “out and about”.

About three-quarters of the children surveyed regularly used tablets, while 74 per cent of 12 to 13-year-olds surfed the web via a mobile phone.

The bulk of that age group owned their own smartphone.

“Not just with kids, but with adults too, they are still holding a device at the same time [as watching TV] and when there’s a two-minute gap or a commercial break … they flick straight to the other device,” Mr Ellis told ABC Radio Sydney

“These things are just what kids are accustomed to.”

Mr Ellis said the generation of children surveyed had grown up with the “expectation” that their entertainment was on demand.

The number of organisations offering streaming services and catch-up television shows via the internet has increased in recent years.

Two-thirds of kids watched videos via the internet in an average four-week period according to the survey, with YouTube being their favourite website.

“These kids grew up being able to push a button whenever they want it at any time,” Mr Ellis said.

“The idea that TV is boring no matter what is on is just because TV is so static and it might have ads on it.”

ABC Radio Sydney listeners have had similar experiences in their households:

“We’re extending our house and have realised that only one room will have a TV because ‘appointment TV’ in our family is pretty much dead. We don’t have Foxtel either. Breath of fresh air not having to plan rooms around TV connections.” — Kathy Franco

“I was brought up in front of the box and learnt about all manner of things; my kids, older now, barely watched TV but surf.” — Kim

“I’ve caught myself telling my eight-year-old to watch TV with his little brother as it’s more sociable than the iPad. We are pretty strict with screens but it has struck me as ironic that I’m saying TV is the sociable activity.”

“Haven’t turned our TV on for many years. Adults and kids alike. As a family we occasionally watch the iPad online together over dinner, otherwise everyone’s entertainment is online and personal.” — Amanda

According to Mr Ellis, the parents of children “are pretty tech savvy themselves” both with online use and with their technology products.

“They’re the ones who bought the tablets that the kids are now using.

“They’re all on Facebook too, so it’s not as though all the things kids are doing is completely foreign to parents.”

Mr Ellis said parents also liked how they had better control online over what their kids watched by installing internet filters.