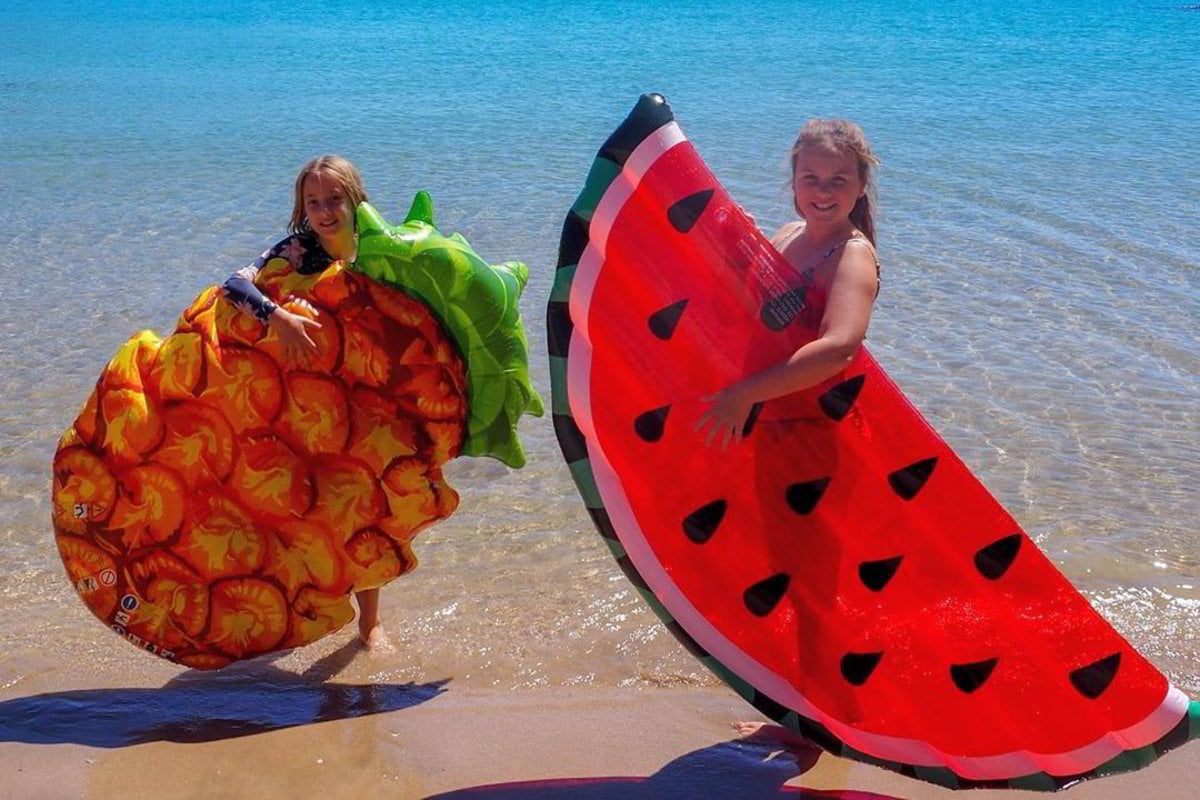 Last Sunday morning, my 10-year-old daughter Emmie and her friend sailed out to sea on inflatable fruit.

Her friend's mum and I were chatting on the beach while our daughters played on oversized floaties I’d picked up from Kmart. Cheap and cute, there was a huge pineapple and a bright watermelon, and the girls were floating on them in the crystal clear water off one of Magnetic Island’s beautiful bays.

I didn’t realise that I’d just placed them into danger.

Watch: What to do if you're caught in a rip. Post continues below.

I thought I’d brought them something fun to play on, and had no idea these floats should only be used in pools. On beaches, bays or open water they catch the wind and can be easily, and rapidly, swept out to sea – with our kids, friends or loved ones on them. And that’s exactly what happened.

A few minutes after the girls had entered the water we heard them yelling to us, but while they seemed a little far away they were still in the bay, and it was pretty shallow. We didn’t worry.

“Oh they’re fine,” we rolled our eyes at each other.

“Kick harder,” I yelled to my daughter as I saw her legs flapping in the air. It looked like she was pretending to try to get to shore. We kept an eye on them but we weren’t really concerned. We knew we could reach them if we swam out.

A tourist boat pulled up on shore next to us and the owner offered to go and get the girls.

“I think they might find it tough to get back,” he said, but we thanked him and said no. They were fine, we thought.

Five minutes later as the girls sailed out of the heads and the pineapple float blew off in the wind, we changed our minds.

“Look we probably could swim out and get them, but would you mind going?” we asked Drew, the boats Captain, still not thinking this was serious (and in fact I doubt we could have reached them ourselves), as we watched him spring into action.

In those few minutes it took for him to reach the girls they’d really started moving. He had to get ahead of them and catch them as they sailed past his boat, caught in the wind.

Out of nowhere a yacht appeared around the heads and while Drew was grabbing the girls it collected the lone pineapple from the ocean and they were all delivered back to us, as we thanked them and laughed about this little adventure.

At the time, I didn’t think the girls were in danger, but in retrospect we were very lucky to have the two boats to help us and that Drew was aware of the danger the girls were heading for.

When I saw the reports recently about a five-year-old girl who had to be rescued by a ferry after sailing off from a beach in Greece on a huge unicorn float, I realised how lucky we were.

The rescue of this little girl is not unusual - people are literally sailing off into the ocean on unicorn floats and other inflatables every weekend. The wind and the currents can move a small child - or even an adult - on an oversized inflatable quicker than you’d ever expect.

Last month two women on stand up paddle boards were carried off by currents off the coast of Ireland and were found the following day after clinging to lobster pots all night. An elderly man was swept out to sea on a blow-up mattress and rescue services are constantly saving people on flamingos and unicorns – some being propelled into open water while posing for that perfect Instagram pic.

Inflatable toys, especially unicorns and flamingos, are basically massive sails that whisk people out into the ocean. And it’s not only the danger of being swept away, there’s a huge risk of drowning if people jump or fall off the float and try to swim to shore.

Luckily for us, we had people around that could tell the girls were heading for trouble and helped us. I hate to think what could have happened had they not been around. I had no idea that these inflatables were so dangerous, and from now on they are retired to pool life only. It’s not worth the risk.