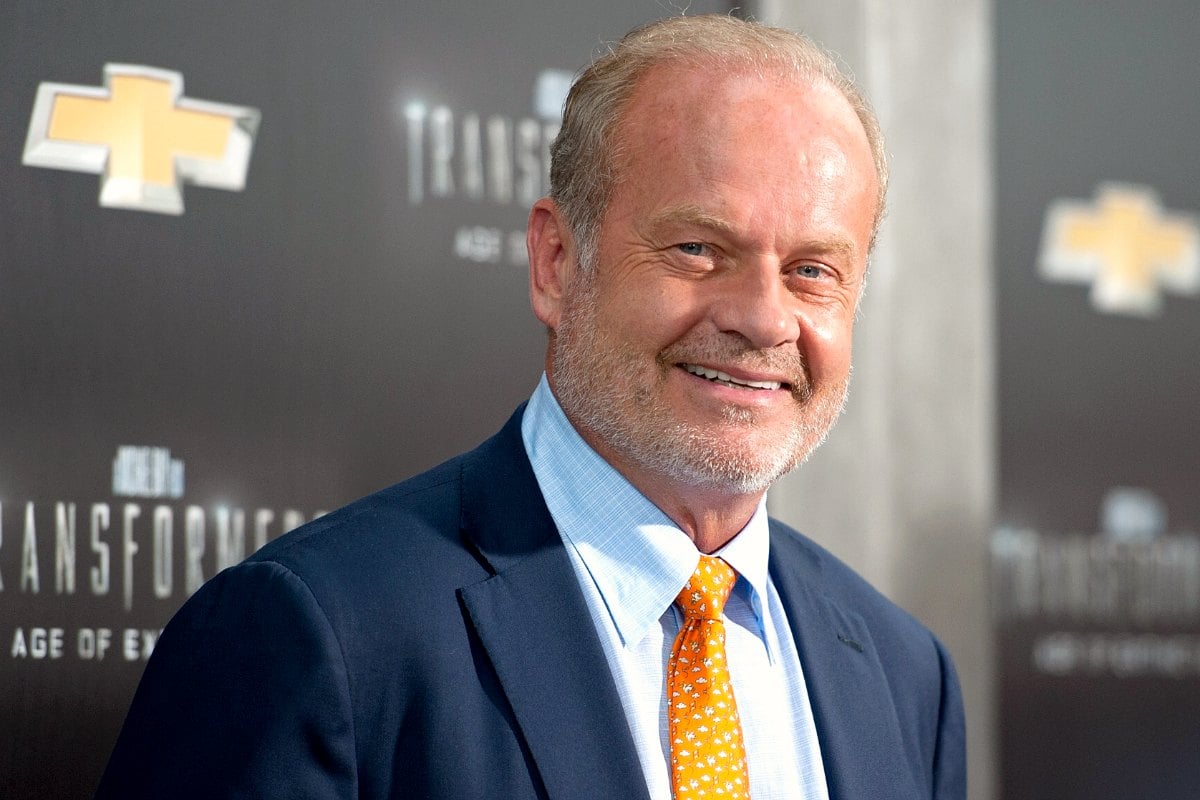 Warning: This post contains mentions of rape, and may be triggering to some readers.

But his own life has been filled with unspeakable tragedy. As well as enduring the brutal rape and murder of his sister, for which he blames himself, he’s also endured the violent deaths of other family members.

Even now, he gets worried if his loved ones don’t call him when he’s expecting them to.

“I get nervous something horrible has happened,” he told the Daily Mail. “I don’t think, ‘I bet they had a flat tyre’. I think someone has taken them.”

Our favourite celebrities doing impressions of other celebs:

Grammer was born in the US Virgin Islands in 1955 to an American couple, Frank and Sally Grammer. Frank owned a music store and published a newspaper. Grammer says his father “abandoned” the family when he was two. His mother took him and his younger sister Karen back to the US, where she brought them up, with the help of her parents, in New Jersey.

When Grammer was 13, he found out that his father, who was still living in the Virgin Islands with his second wife and four children, had been murdered. A taxi driver, enraged by the assassination of civil rights leader Martin Luther King Jr, had gone on a crime spree, placing a bomb and starting fires. He then headed for Frank’s house.

“A man who was proven to be, at least in court, of questionable sanity, I suppose, lit a ring of fire around his house and as my father came down to investigate what was going on, he shot him and, uh, shot him several times and, uh, Dad died,” Grammer later told E!’s Celebrity Profile in 2001.

The name of Frank’s killer was Arthur Niles. Niles, bizarrely, was the name later given to Frasier’s brother on Frasier.

But it was the murder of Grammer’s sister Karen, seven years later, that really tore him apart. Karen was 18, and having finished school, had moved to Colorado, where she was working at a Red Lobster restaurant. Freddie Glenn and Michael Corbett were on a killing spree, having already murdered two people. They tried unsuccessfully to rob the Red Lobster, and, on the way out, grabbed Karen, who had finished work and was waiting for her boyfriend to pick her up.

The men took her back to their flat, where they raped her for hours. Then they put a cloth over her head and drove her to a trailer park. They let her out, and then Glenn stabbed her several times. Badly injured, she managed to reach the back porch of a nearby home, but nobody was inside. She died there, leaving bloody handprints below the doorbell.

Days later, the police turned up at Grammer’s house. He went to Colorado to identify Karen’s body. Being her big brother, he blamed himself for her death, which he says “nearly destroyed him”.

“It’s hard to explain,” he told Vanity Fair in 2015. “It’s not rational. But it happens anyway. I know a lot of people who’ve lost their siblings and blame themselves.”

Grammer told Oprah Winfrey in 2012 that the depression he suffered following Karen’s death led him into alcohol and cocaine addiction.

“The first two years were the hardest,” he said.

Glenn is still in prison for Karen’s death, and Grammer has fought a long battle to stop him from being paroled. Corbett died in June this year, having never been released.

In 1980 there was more tragedy for Grammer. His young half-brothers Billy and Stephen, from his father’s second marriage, were scuba-diving together. When Billy failed to surface, Stephen dived in to search for him. He suffered an embolism after surfacing too quickly and died. Billy’s body was never found, but his mother Elizabeth felt convinced he was taken by a shark.

At that time, Grammer was trying to make it as an actor. It would be another four years before he was cast in the role that would change his life: psychiatrist Dr Frasier Crane in Cheers. When Cheers ended, he scored his own spin-off sitcom, Frasier, for which he ended up earning $US700,000 an episode.

It was two decades of enormous career success for Grammer, but behind the scenes, he was dealing with addiction and tumultuous personal relationships. He was married and divorced three times – to Doreen Alderman, Leigh-Anne Csuhany and Camille Donatacci. His second marriage, to Csuhany, a former exotic dancer who Grammer had met at a strip club, ended when Csuhany was three months pregnant. According to People magazine, Grammer was seeking annulment and demanding custody of their unborn baby when Csuhany was found semi-conscious in a hotel room, surrounded by empty pill containers. She was rushed to hospital and had her stomach pumped, but the unborn baby was lost.

Grammer admitted to the Daily Mail that he had relationships with women who he felt needed him.

“I was into, 'Here’s someone I can fix,'” he explains. “I found people who were a bit hysterical attractive.”

Grammer’s addictions also got him into trouble with the law. He was arrested several times, for DUI and cocaine possession.

In 1996, Grammer rolled his car while driving down a highway. Miraculously, he was uninjured. He decided it was finally time to do something about his addictions.

“I actually spoke to Camille [his then wife] on the phone after that and said, ‘I’ve done something I’m really ashamed of and I’m embarrassed about and I gotta get some help,’” he told Celebrity Profile.

Grammer is now happily married to his fourth wife, British flight attendant Kayte Walsh. They have three children together, adding to Grammer’s other four children from previous relationships.

“I’m in a place that I’ve never been happier work-wise, and I do have time to see my family a lot,” Grammer said in an interview with The Guardian last year. “Honestly, the beauty of being an older dad is you get a chance to kinda try it again. That’s been a real gift.”

If this post brings up any issues for you, or if you just feel like you need to speak to someone, please call 1800 RESPECT (1800 737 732) – the national sexual assault, domestic and family violence counselling service. It doesn’t matter where you live, they will take your call and, if need be, refer you to a service closer to home. If you think you may be experiencing depression or another mental health problem, please contact your general practitioner. If you're based in Australia, please contact Lifeline 13 11 14 for support or beyondblue 1300 22 4636.